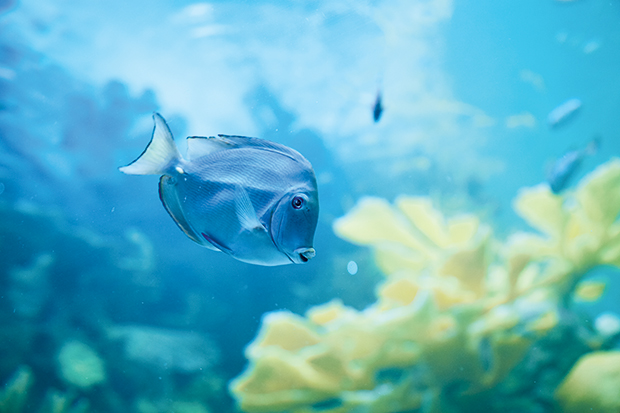 On the deck of the Texas State Aquarium in Corpus Christi, on a bright afternoon this spring, a group of school kids in matching red polo shirts pressed their noses against the glass to spy river otters playing in the artificial stream that courses through Otter Creek. The otters slid and skittered in the water, occasionally posing for snapshots as the children pointed and laughed at their antics. Nearby in the aquarium’s 400,000-gallon saltwater Dolphin Bay exhibit, a pair of playful Atlantic bottlenose dolphins surged and dove, competing for the visitors’ attention. Later, trainers stopped by with fish for the tricksters, who leapt and danced for treats. 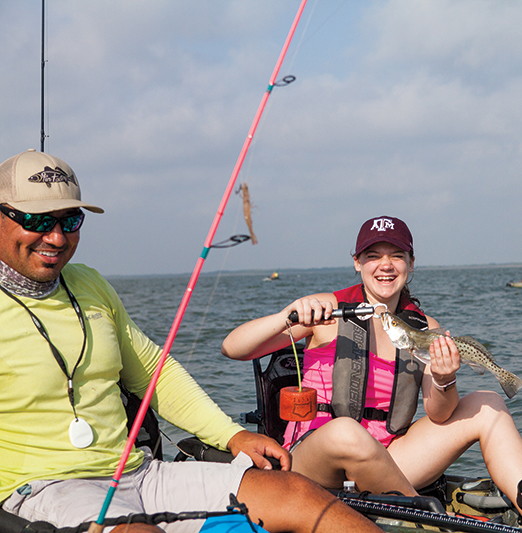 This sort of wildlife action made me feel young at heart, leaving me giddy despite my regrets over leaving my nine-year-old at home in Houston. It was my first visit to the aquarium, and more remarkable than the sight of these aquatic mammals frolicking was the chance to explore the facility’s nearly complete $58-million, Caribbean Journey expansion. While the expansion opened May 13, a preview was my excuse to spend a couple of days in March discovering our official state aquarium and acquainting myself with the charms of Corpus Christi, the little city on the bay.

The 71,000-square-foot Caribbean Journey has tripled the size of the aquarium, which between school groups and out-of-town guests is already a top attraction in the Coastal Bend with more than 500,000 visits a year.

“The whole idea is to take people on a journey to the Caribbean,” explained aquarium President and CEO Tom Schmid, who led me on a hard-hat preview of the new space. The first tropical fish, including some enormous rays, had been introduced to a few tanks. A Florida native who studied sharks as a graduate student in marine biology before moving to Texas a decade ago, Schmid said the new attractions will help to underscore the many connections between the stretch of the Texas Coast he now calls home, the extended reach of the Gulf of Mexico, and far-flung points south of Cancun emphasized in Caribbean Journey. 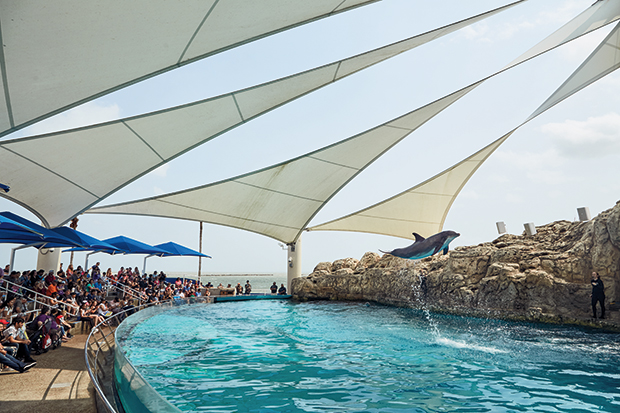 The Dolphin Bay exhibit is one of the most popular at the Texas State Aquarium.

One of the main centerpieces of Caribbean Journey is a new shark gallery, which features a realistic, life-size partial shipwreck. Similar in size to Dolphin Bay, the display holds 400,000 gallons and features a 68-foot-long, 12-foot-tall window, which its California-based manufacturer claims is the longest acrylic portal in the country. Visitors may also enjoy breathtakingly up-close views from a secondary tunnel along the backside of the tank, one of several new immersive experiences.

“What we were trying to do is recreate the experience of scuba diving a wreck in the Caribbean,” Schmid said. “That’s not something a lot of people get to experience in real life, so this is probably as close as most of them will ever get.”

There are a variety of other enclosures for observing the charismatic creatures of the expansive Caribbean Journey addition. With two levels of viewing platforms, upstairs and downstairs, visitors can peer down into deep pools and also enjoy a taste of the tropical forest canopy found along Mexico’s southern coast. New galleries imitate the mangrove swamps of the Yucatan Peninsula and the Sian Ka’an Biosphere Preserve in Tulum, a UNESCO World Heritage Site renowned for its biodiversity; and a “living, coral reef laboratory,” which according to Schmid will allow researchers to grow and study corals in what one day could be the largest coral installation at any U.S. aquarium. “Eventually we will have as much living coral as we have synthetic coral,” he said, noting that the cultivation areas will also be on view.

Aside from its marine displays, the wildlife at the Caribbean Journey includes critters better known for their fur and feathers. In addition to assorted free-flying birds, a keel-billed toucan—those bright-beaked rainforest denizens best known as a model for the Kellogg breakfast-cereal mascot Sam—perches and preens in the jungle aviary (apparently, toucans are not friendly in real life). Another display features habitat for the Mexican or Morelet’s crocodile, a toothy freshwater reptile found in southern Mexico, Belize, and Guatemala that can grow up to 10 feet in length—rivaling long-time aquarium favorite Bo, the American alligator in the Swamp Tales outdoor pool. Elsewhere, vampire bats occupy a new mock-up of an ancient Mayan ruin, while sharp-eyed visitors can search the canopy for Zena, a two-toed sloth.

The success of the new expansion affirms the aquarium’s recovery from a tragic 2015 accident that resulted in the death of nearly 400 fish due to a mislabeled chemical being introduced into a display tank. In 2016, the aquarium won a lawsuit against the chemical’s distributor and no longer does business with the company.

Seeing the longstanding Gulf Coast exhibits alongside the brand-new Caribbean Journey, Schmid said, will ideally help visitors make connections between conservation challenges faced in Texas—as well as successes like the American alligator—and those faced in communities beyond the horizon. He pointed to recent die-offs documented in the reefs of the Flower Garden Banks National Marine Sanctuary, a popular dive spot about 75 miles offshore from Galveston, and some of the bleaching events that are damaging Australia’s Great Barrier Reef. “We’re at the point where a trip to the aquarium becomes a conservation act,” he said. “The more people we can bring in, the more money we can raise for wildlife.”

That evening at the Emerald Beach Hotel, I ordered a drink at the outdoor Kokomo’s Bar and considered Schmid’s hopeful message. I find it fascinating that the aquarium uses water drawn from Corpus Christi Bay for its saltwater exhibits, filtering and circulating it through the galleries. Overlooking the beachfront I was stuck at the strange symmetry of Texas seawater sustaining the Caribbean exhibits. It had taken years of planning and serious fundraising to complete the project, and now the aquarium boss was already turning his attention to the future. 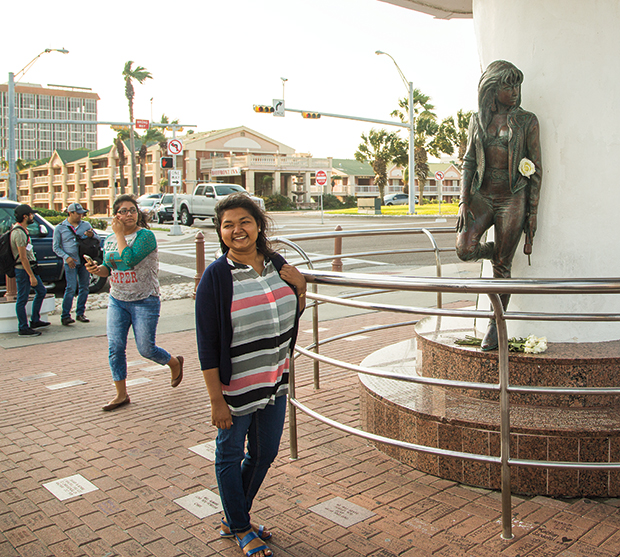 A fan poses at the Selena Memorial Statue on Shoreline Boulevard.

After studying ocean life at the Texas State Aquarium, I had planned to fish for some with local guide Captain Mike Morales down by the Padre Island National Seashore, but storm predictions scuttled our plans.

The protected 70-mile seashore, part of the National Park System, is the longest barrier island in the world, where sea turtles nest and beachcombers congregate along the dunes. A kayak-fishing specialist and owner of Fin Factory Charters, Morales also runs motorized shallow-water trips in pursuit of redfish, black drum, and sea trout, the main targets for Coastal Bend anglers. About a year ago, Morales and I had taken a couple of kayaks out to Bird Island Basin off the seashore, where we had caught just a handful of fish. Now, the weather refused to cooperate for the rematch I desired. “Corpus Christi is a great destination not just for fishing, but for people who just want to enjoy nature,” Morales reminded me.

Meanwhile, kids splashed in the indoor pool at the hotel, while beyond the rock jetties wind surfers and kite boarders skimmed the surf as the breeze picked up. The Emerald Beach Hotel held a certain low-key, mid-century modern charm—the late Las Vegas casino developer Wilber Clark commissioned the property in the 1960s—and it served as the perfect perch to ponder my next move.

It turned out I didn’t need to look far to find more fun. My aquarium tour happened to coincide with the third-annual Fiesta de la Flor, a two-day music festival celebrating the legacy of slain Tejano singer Selena Quintanilla. Selena, as she is universally known, remains an object of deep devotion in Corpus Christi, the city she called home until the president of her fan club shot and killed her in 1995 at the age of 23. Even before the fiesta got underway, I spotted dozens of aficionadas taking wind-blown selfies in front of the bronze Selena Memorial Statue by the bay, a reflection of how the departed star’s magnetic allure still pervades the town.

So, the following morning, I hustled myself to the busy Hi Ho Restaurant, one of the recommended stops for anybody interested in Selena (or outstanding breakfast tacos). A favorite of the entire Quintanilla clan, the restaurant boasts an impressive array of Selena posters and memorabilia as well as photos and concert posters from other popular Tejano recording artists, at least two former presidents, and assorted celebrated South Texas athletes. My huevos rancheros with a fluffy flour tortilla hit the spot, while the service was warm and welcoming.

Fueled up, I headed across the way to discover the treasures hidden in the Selena Museum. The museum occupies a series of renovated automotive workshops Selena’s father, Abraham, transformed into a recording studio and rehearsal space for Selena and her band, which included her older brother, Abraham III, on bass guitar and her sister, Suzette, on drums. In a surreal moment, Suzette popped out of her office near the costume display—the Quintanillas still own the property—to greet veteran Hollywood actress Jackie Guerra, who played the drummer in the 1997 film biopic Selena, which featured Jennifer Lopez in the starring role. As the two women hugged, they reminisced and recited lines from the film to the delight of the crowd. “I don’t want to play the drums! Forget it!” they laughed.

None of this quite prepared me for the Friday night performance I attended, as thousands of faithful fans gathered at the fiesta site along the seawall to hear contemporary Tejano artists pay homage to Selena. While I was at the concert, none received a warmer ovation than La Mafia, a Houston-based band that had collaborated with Selena and packed their set with covers of some of the singer’s biggest hits. It stirred my heartstrings to stand among the throngs, young and old, dancing and singing in tribute to a talent taken from the community much too soon.

As I made my way to the exit, I noticed that many in the crowd wore shirts bearing the same quote attributed to Selena: “The goal isn’t to live forever but to create something that will.” Strangely, nobody knows whether the singer actually said such a thing. Reflecting on what Schmid has accomplished at the aquarium, however, I thought it a fitting credo for Corpus Christi’s multiplying claims to fame.