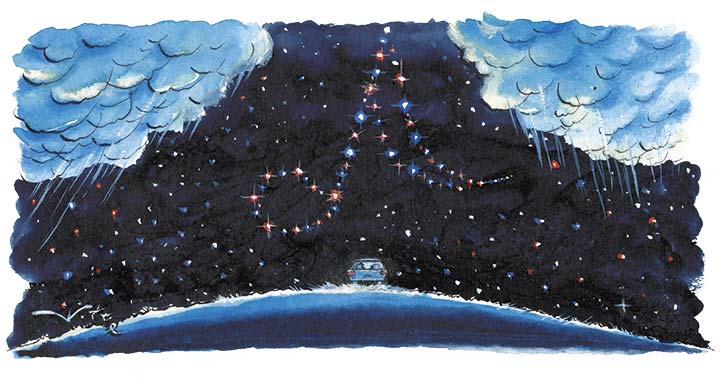 I am enchanted by night sounds. I am aware of ambient noise always, but in my day-to-day life the buzz and hum of air vents and traffic is seldom remarkable enough to draw my attention.

For some reason when I travel, however, I find the noises of a new location distinctive. Day sounds are different, too. But nighttime somewhere unfamiliar is filled with sounds unique enough that I easily recall them any time I close my eyes to remember a place I’ve enjoyed.

I’m sure the surf swishes, murmurs, then roars, all day, every day in Hawaii, but that is a sound I associate with a bedtime breeze filled with tropical smells. In New York City, the evening soundtrack is honking horns and pitchy sirens. I know for certain cabbies honk incessantly, but I don’t know why I never hear them when I’m on the street. Some of my fondest Manhattan memories involve pulling the shades, tucking into bed and listening to the cacophony that confirms the city never sleeps.

In Texas, the night sounds are as distinctive as the geography. The gusting West Texas wind and distant train whistles do not sound like the Hill Country, which always chirps and whirs and buzzes. The deep dark hours of East Texas, especially in the vicinity of Caddo Lake, are filled with sounds muffled by thick pine needles, clouds of fog, or curtains of moss hanging from cypress.

I first thought about the stars at night and the sounds that accompany them a few years ago, when I rented a ranch outside Bandera for a week in July. The creaks and wheezes of the century-old ranch house became my lullaby. Tree frogs chirped and bull frogs harrumphed. Cattle lowed from time to time. A spring that gurgled an easy walking distance from the house seemed most musical just before I slept. Raccoons and armadillos scrabbling about sometimes made the dog bark, but it was a different bark than she lets loose at home, more tentative and inquisitive and far less annoying.

As the 4th of July approached, my teenage son let me know the night sounds he was looking forward to were more explosive than the ones I’d been enjoying. Having headquartered ourselves on thousands of acres outside the city limits, he argued, we could surely justify a stop at one of the firework stands that in July pop up along Texas roadsides like mushrooms. A city boy, Elliott had enjoyed many a firework display in his life, but had never been allowed to purchase even one. As he pleaded, I was amazed to discover I had so many happy memories involving little black pellets that uncoil like snakes and brightly colored smoke bombs my father once surprised my siblings and me with. I promised the next day we’d see what we might find.

As the sun slid behind the hills, we took a plunge into a bracingly cold swimming hole beneath a waterfall that was gushing that summer. We stayed in the water until our finger pads wrinkled up. It grew dark enough that the scramble to the car involved senses other than eyesight. The evening symphony began then, a gentle hum at first, then—like an orchestra warming up—a rush of sound that swelled and moved east to west as if drawn to chase the departing sun.

Back at the house we found a notice on the kitchen table, a simple request that we abstain from lighting any fireworks on ranch property. Of course I had been thoughtless in my promise to my son. Despite the recent rains, we were surrounded by miles of parched ranchlands. We dared not entertain thoughts involving random sparks and explosions, even miles and miles from the closest town. Elliott, of course, was crestfallen.

The evening of the 4th I suggested we drive to the highest point on the property, supposing from there we would see any sanctioned fireworks display, but also because a very steep, narrow, and potted road would prove the odd and maybe a little bit thrilling sort of nighttime outing that might allow a very disappointed 12-year-old to forgive his mother.

There were no fireworks that night. In fact, it began to rain shortly after we reached the summit. But we parked the car, threw a quilt on the hood and climbed up to lean back against the front windshield. We listened for a long time to the night sounds. When the misty rain stopped, the clouds suddenly opened like curtains to a sky full of stars. It was sudden and unexpected display of beauty that seemed to hush even the frogs and crickets. I heard a little intake of breath from my son. “This is kinda better than fireworks, don’t you think?” Just then, cicadas all around us ignited as if clamoring to agree.