The sweet side of Texas summers? Swimming-hole satisfaction 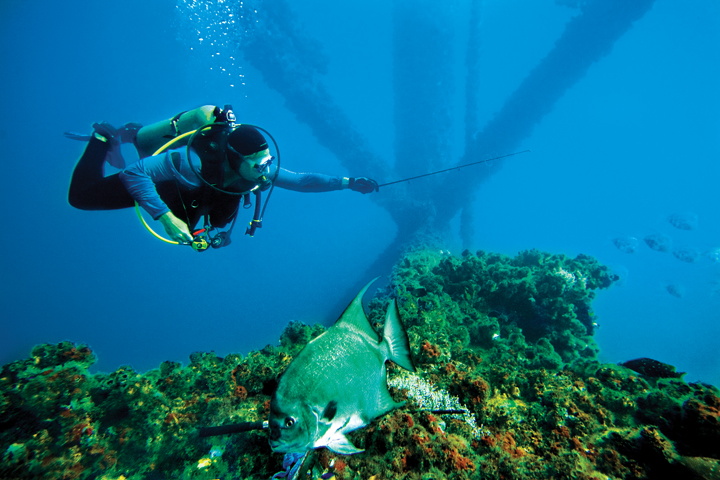 Under water, light behaves differently; colors sparkle, then fade. Sounds magnify and distort. Liquid cradles a body accustomed to mere air. Down and up become abstractions. Swimming equals flying. Water replaces atmosphere, and the sea floor or lake bottom might resemble a barren moon or the most riotous field of flora imaginable.

I often hike for hours on land without glimpsing a wild animal, but in water, life surrounds me—schools of small fish, solitary giant ones, scuttling crustaceans, and strange floating creatures amid waving grasses and jagged coral. I have experienced some of my most memorable and thrilling sights—a sea turtle with an animated face, tiny fish in a rainbow of colors, a spaceship-like manta ray moving in slow motion—under water.

Almost everyone can enjoy this alternate universe through scuba diving or the sport’s less challenging counterpart, snorkeling. Texas offers a diverse selection of sites. Here are four of the best.

I first met the clear, bracing waters of Balmorhea’s swimming pool on a family vacation decades ago. Wading far into the shallow wing of a pool that stretched nearly the length of a football field, I imagined I stood in the middle of an ocean. Apparently other people had a similar reaction, because in the 1970s, scuba divers began frequenting this remarkable oasis in the desert.

Every day, 19 million gallons flow from San Solomon Springs, refilling the one-and-three-quarter-acre pool completely every six hours. That accounts for visibility reaching 80 horizontal feet-at least early in the day, before divers stir things up. Water temperature remains 74 to 76 degrees year round, so consider bringing a wetsuit. The spacious grounds provide plenty of room for gearing up, and steps into the water facilitate entry and exit.

Twenty-five feet below, among the rocks and plants at the bottom, fine gravel over the pool’s prolific springs resembles tiny, exploding popcorn. Pool residents include velvet-black headwater catfish, endangered Pecos gambusia, schools of Rio Grande tetra unafraid to get nose-to-mask, Comanche springs pupfish, and the occasional crayfish or softshell turtle. Balmorhea offers a leisurely, safe dive experience that is perfect for beginners, and the
pool’s shallow, clear waters make this a fun outing for snorkelers, too.

The local dive shop keeps irregular hours, so confirm that it’s open ahead of time, or bring your own gear and air tanks. I like to bring a wagon or dolly to help transport tanks and gear from the parking lot to the pool.

Roughly 110 miles from Freeport, I plunged six feet down from the M/V Fling, into the Gulf of Mexico to explore the Flower Gardens Banks National Marine Sanctuary. Here, rays of sun stream through Jolly Rancher-blue waters, a setting unlike anything near the shore. I took my first, Darth Vader-like
breath and began to descend amid columns of bubbles rising from divers beneath me. A school of fish gathered under the boat and a torpedo-shaped barracuda hung motionless in the water 20 yards away. Admiring his buoyancy control, I swam down to the reef, clearly visible 80 feet below.

This sanctuary protects the northernmost coral reefs in the continental United States, including the West and East banks, 65 to 120 feet below the surface on the caps of salt domes rising from 450-foot depths, and Stetson Bank, a 1,500-foot-long ridge of pinnacles.

Most divers come here from Freeport aboard the Fling, as I did. In spring, some brave 70° waters and often-rough seas for the chance to see schools of hammerhead sharks. But summer water temperatures approach the mid-80s, and divers enjoy more tranquil conditions for exploring the reef and its  residents: shellfish, sea urchins, 280 species of fish (including 20 species of sharks and rays), loggerhead and hawksbill sea turtles, and the occasional visiting dolphin.

We left port on Friday evening, tying up to a buoy in the West Bank by seven on Saturday morning. The 30 divers aboard quickly geared up and fell in line
to enter the water. The sheer variety of marine life and endless blue in all directions takes hours to explore, but a dwindling air supply forced me to surface after 40 minutes of awe. Breakfast awaited on board; wet and happy divers crowded into the galley’s long booths, devouring eggs, bacon, and biscuits while swapping tales of what we’d seen below.

Soon it was time to gear up again. In fact, the weekend schedule typically reads dive, eat, sleep, dive, eat, sleep—with a total of five dives on Saturday and two on Sunday. Generally, it includes two dives at the West Bank, an old oil rig platform (always one of my favorites), and two at the East Bank, one of them a night dive, then two at Stetson on Sunday morning. Three-day trips include a total of 11 dives—five at the West Bank, four at the East, and two at
Stetson. The crew prepares meals onboard and provides treats, like hot-from-the-oven brownies with Blue Bell ice cream, pretty much around the clock. We sleep in bunks below deck, four to a room, and nap on lounge chairs on the sun deck.

The distance from shore, depth, and often-strong currents make this an experience for advanced divers only. The Fling welcomes non-divers age 13 and older, but given the depth of the reefs, there is little to see from the surface.

On a diving trip this spring, I explored a ship’s observation wing and swam along its starboard navigation deck, stopping to enjoy the view. I wasn’t on a cruise ship, but rather above one. The ship in question lies 17 miles out from South Padre Island and 132 feet below the surface of the Gulf of Mexico with the top of its superstructure—the observation wing—at 62 feet deep. Here, in 2007, the Texas Parks and Wildlife Department sank the Texas Clipper, a 473-foot-long ship that served as a troop transport during World War II, then operated as a cruise liner, and finally retired as a training vessel for Texas A&M mariners. Now, resting on the bottom, it creates an artificial reef populated by corals, barnacles, and sponges, and offers shelter to all manner of fish and other marine life.

My journey there on American Diving’s 60-foot dive boat took about an hour. The crew helped divers gear up on the back deck. Then I simply fell forward into the gentle waves and followed a line down to the Clipper. Rains had limited the visibility, which is generally very good, and the submerged ship’s outline faded into the somewhat murky sea. But as a school of large red snapper passed by, my dive buddy, none other than American Diving owner Tim O’Leary, used a light to point out plaques commemorating the Clipper‘s three lives, then a blue and yellow queen angelfish, schools of juvenile red  snapper, a pair of cocoa damselfish, and a large grouper. Back on board, he showed me a diagram of the huge ship, pointing out the tiny part we’d  explored. Clearly, it would take more than one—perhaps more than a dozen—dives to do the Clipper justice.

Next, we motored a short distance to Seana’s Rig, a decommissioned natural gas rig that supports a rich variety of coral, barnacles, and other tiny sea life,
including blennies and fans. Huge schools of snapper and jacks swirled inside the rig, a flashing, flowing wall of fish that bent away when I reached out a hand. The large fish and the tiny creatures on the structure make for a fascinating dive—one I ended reluctantly. As the boat turned toward shore, I grabbed a soda and soaked up sun on the front deck, planning a return trip.

American Diving offers trips that include two or three dives at the Clipper, or two dives at the Clipper plus one rig dive, as well as dives to a half-dozen other wrecks and rigs in the area. The boat departs from the Sea Ranch Marina on South Padre Island.

Underwater cliffs and monster bass (up to 13 pounds) attract divers to this sizable reservoir straddling the U.S.-Mexico border near Del Rio. Some 540 miles of shoreline on the Texas side makes the lake’s underwater features easy to reach.

Amistad NRA staffer Angela Mcclendon points fellow divers to Scuba Cove in the park’s Diablo East area. Marked with buoys and sporting a paved ramp for easy entry into the water, the cove contains two sunken boats and a treasure chest to explore, and Mcclendon promises we’ll see turtles, sunfish, bass, and catfish. “Look for baby bass hiding in rock crevices,” she says, “and listen to the catfish croaking underwater as it gets late.”

A dive called Castle Canyon is McClendon’s favorite. ”You follow a rock cliff down to about 100 feet and see fish in the crevices, and when you look up,  the rock looks like a castle,” she says.

Mark Bewley of Amistad Aqua Adventures knows of several other cliff dives, some up to 130 feet deep. “Chuy’s Island has some swim-throughs, all recreational. The old Highway 90 bridge is a submerged picnic area with stone picnic tables, shade covers, fire and barbecue pits, and even stairs that are still intact. I take people to a submerged ranch house at about 45 feet. There’s also a sinkhole that we dive. I won’t finish this lake in my lifetime. It’s an incredible dive site.”

Sign up for Bewley’s two-tank dives on Saturdays, or rent his 29-foot boat for a two-tank daytime dive trip, or for a nighttime dive. He also takes divers on overnight camping trips that involve a dive the next morning and on dives in the Pecos or Devils rivers, which feed into Amistad.

Visibility in Lake Amistad runs up to 30 feet, with temperatures in the mid-50s in winter and mid-80s in summer. Early summer offers the best diving, as the water warms up but visibility remains good.