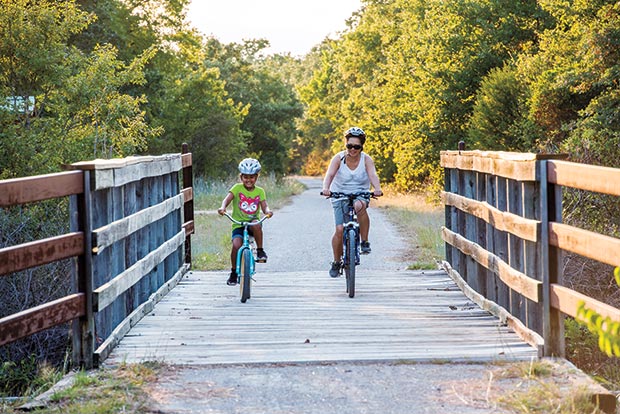 A flash of bright green catches my eye, and I slam on the brakes, my bicycle kicking up gravel as I skid to a stop. A grass snake nearly 3 feet long slithers out of my path and into the underbrush, leaving a faint wavy line in its wake. My eyes return to the trail ahead, its crushed-limestone surface pale against the grapevine-covered thickets on either side. Sunlight filters through the canopy of leaves overhead, dappling the ground.

My journey on the Lake Mineral Wells State Trailway has barely begun, and I am cruising with fresh legs until the snake reminds me to slow down and take notice of the natural surroundings. My riding companion adds another word of caution: “I can tell you that on the way back, it’s going to be harder,” says Chris Watson, manager of the Flying Tire Bicycles shop in Weatherford, noting that even the gentle grades of this former railroad route can be challenging over time.

Our mission is to ride this trailway in North Texas from Weatherford to Mineral Wells and back—a 40-mile round trip that travels over several eras of regional history. In the late 19th century, the railroad on this route carried passengers from Weatherford to the smaller resort town of Mineral Wells, where visitors could drink or bathe in the mineral waters that gave the town its name. During World War II, the trains carried supplies to Camp Wolters, an infantry-training base in Mineral Wells. A freight line later used the track until it ceased operations in 1992. That’s when the city of Mineral Wells and the Texas Parks and Wildlife Department began collaborating on the conversion of the railroad into a multiuse trail. Construction began in 1996, and the crushed-limestone trailway opened in June 1998 for pedestrians, cyclists, and, save for a paved section in Mineral Wells, equestrians.

Watson and I set out from the Weatherford trailhead in the morning with the crickets still chirping in the grass. We passed two bicyclists and a walker, but otherwise our only company has been the cottontail rabbits and cardinals that scatter as we approach. Watson tells me that other riders have encountered bobcats, coyotes, deer, and foxes. He’s also seen young feral hogs.

The portion of the trail near Weatherford is rural and quiet, weaving through farmland where curious cows watch us pedal past. Wooden bridges carry us over muddy creeks, where I see rocks studded with basking turtles. After almost 11 miles, we reach the community of Garner, where the Garner Store and Café beckons with air conditioning and cold drinks. Watson replenishes his water while I note the freezer full of ice cream and paletas.

A few miles later we arrive at the Lake Mineral Wells State Park spur trail, with its quad-burning switchbacks. From the park trailhead we follow a paved road to the rock-climbing area at Penitentiary Hollow, where an overlook at the top of a bluff reveals a postcard-perfect view of Lake Mineral Wells. We lock up the bikes and descend a Civilian Conservation Corps-built staircase that twists around fern-draped boulders and deposits us at the base of the cliff, where climbers are plotting their ascent up its 30-foot face. In addition to rock climbing and rappelling, the state park offers 11 miles of trails, camping, and a 640-acre lake for fishing and paddling.

The state park occupies part of the old Camp Wolters, later named Fort Wolters, a training base for helicopter pilots during the Vietnam War. Just west of the park, we stop at the National Vietnam War Museum, located less than a mile from the old base and right on the trail. Watson and I check out the exhibits inside the temporary building—a permanent structure is planned—then spend a quiet moment tracing our fingers along the names inscribed on the half-scale replica of the Vietnam Memorial in Washington, D.C.

In the late 19th century, the railroad on this route carried passengers from Weatherford to the smaller resort town of Mineral Wells.

Back on our bikes, we follow the trail through industrial and residential sections of Mineral Wells to the western trailhead just south of downtown. Watson and I high-five before detouring a few blocks north to the charming Brazos Market & Bistro. We peruse the tempting menu of dishes like roasted vegetable pizza and stuffed avocados but opt instead for a light snack of chips and lemonade in preparation for 20 more miles of riding. After refilling our hydration packs and making a quick circle around the old Baker Hotel building—a shuttered relic of the town’s health-resort heyday—we head back east.

On the return trip we’re treated to a new perspective on the countryside: horses switching their tails in improbably green fields and country cottages flanked by flowerbeds. While this former railroad bed lacks steep inclines, I can tell we’re working harder as we pedal past Garner, pushing against the grade that Watson had mentioned earlier. Chugging along, I pretend for a moment that I’m the old resort train, loaded down with tourists recently refreshed by the waters of Mineral Wells. The thought lasts only a moment before a cottontail darts across the path, grounding me firmly in the present.

“This is my favorite part of the path,” Watson says as we arrive at a shaded section of the trail where the trees are so dense they form a green tunnel. “Even though I’m riding a bike, it makes me feel like I’m a knight riding a horse on his way to battle. It’s cool and calm and refreshes my mind.”

That relative cool helps us power back to the highest point on the trail, where a small sign notes the elevation: 1,235 feet above sea level. From there, we’re practically coasting the 4 miles back to the parking lot until a thorn punctures Watson’s back tire. We walk the bikes the last quarter-mile, but we feel accomplished: Including our detour into the state park, we’ve ridden 42 miles. And the best part is that we never had to deal with traffic—unless you count four bunnies, four lizards, and one bright green snake.