Take the quintessential road trip from San Saba to Graham

Written by Art Williams, Photographs by Will van Overbeek | From the February 2016 issue | Updated: February 10, 2016 | Filed Under: TRAVEL 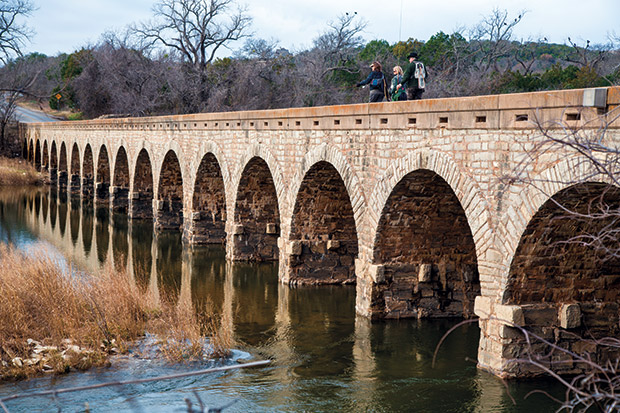 Many folks currently residing in Texas arrived only in the past few decades. And while those of us who go much farther back make every effort to educate these newcomers on important aspects of being a Texan, some things must be learned through experience.

Texas 16 travels some 160 miles from San Saba to Graham. Following is contact information for towns and attractions included in the story.

Take the tradition of the road trip. A state with 80,323 miles of centerline naturally holds the road trip in high regard. Hearing about such trips taken by others, while also an important tradition, simply can’t substitute for the real thing. Nor does barreling down the interstate, moving from point A to point B, qualify as a road trip. That, my friend, requires meandering two-lane roads, passing through small towns, pulling over to read historical markers, and eating at places run by the folks who own them.

Texas 16, the longest state highway in Texas, totals 541.8 miles from Zapata down on the southern border to just south of Wichita Falls—probably too much to bite off, whether you’re one of those “got here as fast as I could” Texans or a direct descendant of Sam Houston. But its length from San Saba north to Graham, about 157 miles, makes for a quintessential Texas road trip.

San Saba officially became a town in 1854, but people inhabited this spot along its eponymous river back in prehistoric times. In 1919, the county, also named San Saba, produced 3.5 million pounds of pecans, more than twice the amount of any other state, let alone county. These days, its annual production ranges from 2 to 5 million pounds. That’s a lot of nuts, and at least eight companies sell them a variety of ways.

During my visit, I had pecan pie at Alamo Pecan & Coffee Company on the courthouse square, Pecan Bottom Ale fermented with pecans at Bar D Brewhouse about a block north of US 190, and a sweet, doughy cinnamon roll sprinkled with pecans at Oliver and Company, in the historic Dofflemyer building at the corner of Texas 16 and US 190. 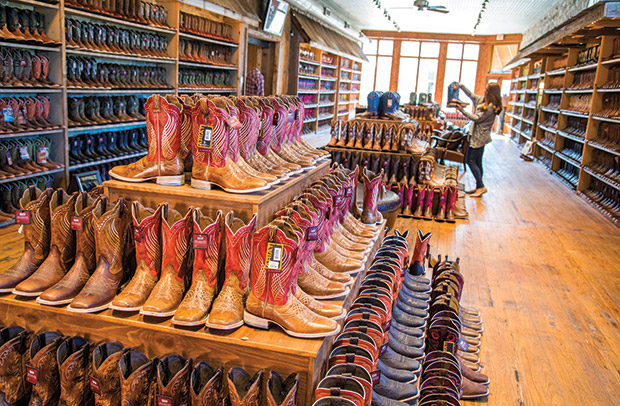 That had me considering a new (larger) pair of jeans, and San Saba has just the place—Harry’s. In 1939, Ike Shapiro founded a Western wear and boot store in two buildings, also at the 16 and 190 intersection. His son Harry joined the business a few years later and, in 1970, added a third building. Former employees Lorena Terry and David Parker bought the store from the Shapiros in 1986 and added yet another building in 1998. In 2008, Ken and Kynda Jordan and Clay Nettleship bought the business and began restoring the buildings. Today, the store takes up more than half a city block, one building filled entirely with men’s boots, another with women’s boots, and the others stocked with apparel, accessories, home furnishings, and children’s clothes, boots, and toys. Whether you need to up-size your jeans or your current fashion screams California or city slicker, Harry’s can fix that. 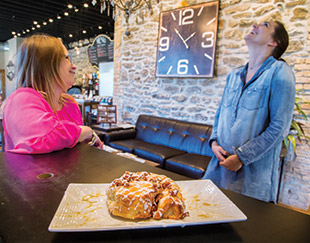 While pecan trees take the spotlight here, the town’s most majestic tree, an oak, grows north of town on the side of China Creek Road. The Wedding Oak, a centuries-old sprawling specimen that’s the namesake of the nearby Wedding Oak Winery, sports a trunk so big it would take five or six people to link arms around it. As I attempted, unsuccessfully, to capture it in a photograph, I pondered that this beauty may have been a tiny sapling when the first European explorers reached our coast. 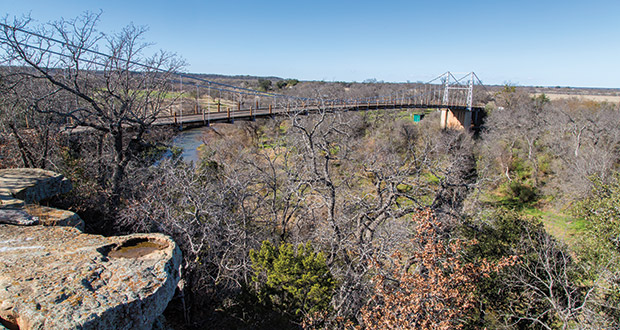 I headed north over rolling hills and through fields dotted with rolls of hay like giant marshmallows. A detour on FM 500 of about 14 scenic miles took me to Regency Bridge, one of the few suspension bridges left in the state. Built in the 1920s, demolished by a flood in 1936, and rebuilt mostly by hand in 1939, the bridge was recently refurbished and reopened in early 2015. Its single lane arcs over the Colorado River with only a couple of strands of cable between cars and river. I drove across but also walked to the middle of the span just to enjoy the unfettered view.

The highway next passes through Goldthwaite, a town founded by the railroad and named for a building engineer. Early Spanish explorers and stagecoaches took this route, which qualifies as an early form of road-tripping. 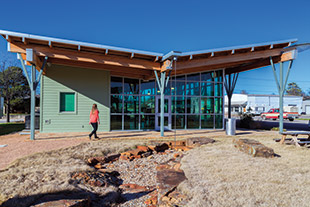 Goldthwaite boasts a historic jail, official state championship goat cook-off, and Legacy Plaza, a city block occupied by a welcome center and botanical garden, along with an outdoor pavilion set to open this spring and, slated for 2018, a Native American interpretive center showcasing area residents back 10,000 years. “The garden replicates a ridge along the Colorado River from several thousand years ago,” says landscape designer Tab Ledbetter. A stream flows through a rock canyon lush with native plants such as pecan, roughleaf dogwood, Texas redbud and persimmon, agarita, sideoats grama, upland switchgrass, and buffalo grass. I walked past a model wickiup (Native American shelter) and authentic bedrock mortars, depressions left in rocks by people pounding corn and other grains on them.

Pecan trees thrive here as well, and for more than 40 years, Pecans.com (the business adopted this “new” name in the ’90s)has sold nuts wholesale and retail and in a variety of treats. I stopped in for another pecan fix and decided, what the heck, why not buy an entire pie? 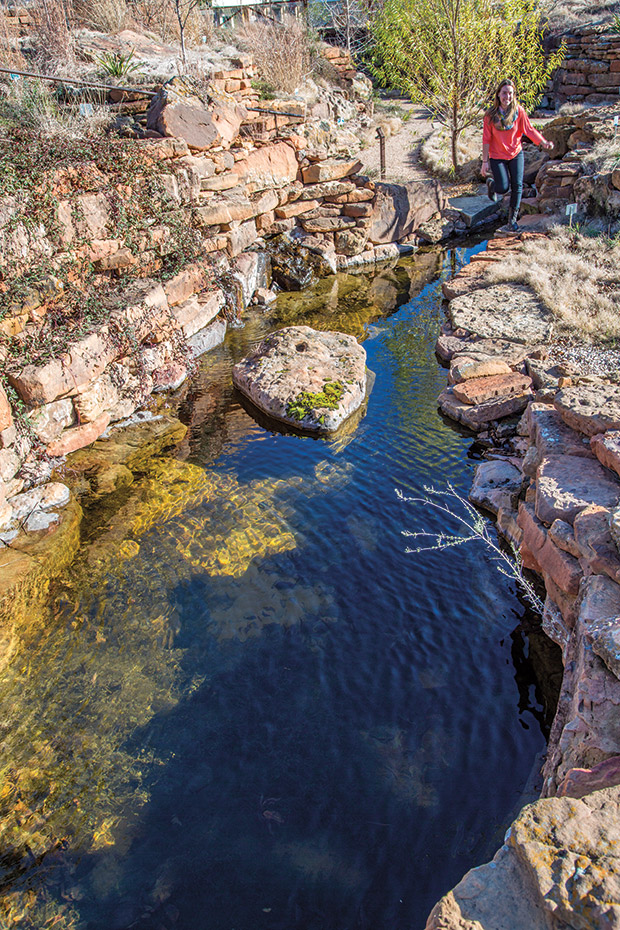 I enjoyed a generous slice of said pie that evening at Lazy W Guest House on the Triple R Ranch outside town. “Dori and I moved here in 2002 to get away from big-city hustle and bustle in Dallas,” says Triple R owner Warren “Bull” Blesh. The couple soon set about improving the historic oak-prairie savannah landscape on the property, then decided they wanted to share it with hunters and road-trippers. As the sun went down, I sat on my porch and watched deer feed in the golden light, then enjoyed a sky full of stars after dark. 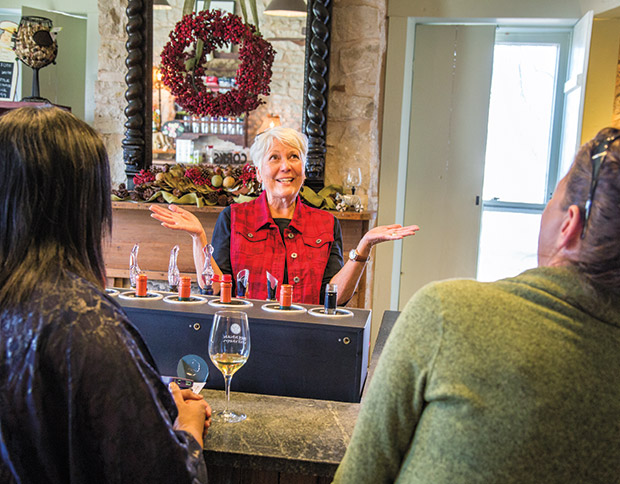 I continued north the next day, past pastures where fat cows grazed. I stopped in Comanche at Brennan Vineyards, where the tasting room occupies one of the oldest homesteads in Texas, completed in 1879 and a designated state historic landmark. History also takes center stage in this town square, which has possibly the state’s oldest extant log cabin courthouse and a bouquet of historical markers. True road trips include stops at these iconic signs commemorating everything from battles to buildings and, of course, old travel routes such as the Camino Real. Texas has more than 16,000 markers; Comanche County alone more than 60.

North of Comanche, the hills grew higher and the views longer. I crossed the Brazos River below Possum Kingdom Lake and drove into Graham. This county seat claims America’s largest town square, with a road around the courthouse built wide enough to hang U-turns in horse-drawn wagons. Long since divided into inner and outer streets, the square features another great thing about small Texas towns—lots of free parking. I took advantage of that to window shop my way around and check out an archway, all that remains of a courthouse built in 1884. Bas-relief sculptures of wagon trains, buffalo hunts, and other old-time scenes adorn the current courthouse, built in 1932. Across the street, a 1935 WPA-built post office building now houses a museum featuring impressive collections of spurs and cowboy hats, and an art gallery with rotating exhibits.

I picked up a Driving Tour of Historic Young County Texas CD at the Visitor Center, and hit the road for a couple of hours listening to colorful stories of old buildings, raids, ambushes, and wagon trains. I lingered at one of the stops, Fort Belknap, the northern anchor of a series of U.S. Army forts stretching from the Red River to the Rio Grande, built to protect the Texas frontier. It has a couple of museums, an impressive collection of original rock buildings, and lawns shaded by stately pecan trees. 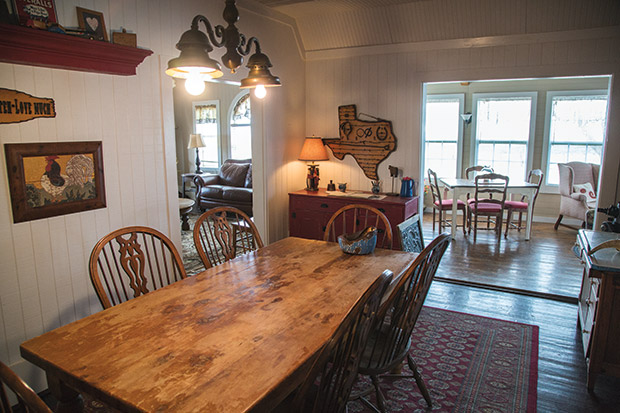 Just before dark, I experienced a little living history, joining a line of cars snaking into one of the oldest operating drive-in theaters in Texas. The Graham Drive-In runs double features of first-run movies on Friday, Saturday, and Sunday nights May through Labor Day weekend, with additional weekends September through April, depending on weather and film availability. Families and kids set up chairs in pick-up beds and on the grass in front of their cars, filing through the concession stand for popcorn, ice cream, candy, and nachos.

My home for the night, the Hockaday Ranch Guest House, overlooks a bend of the Brazos River, surrounded by 1,200 acres of working ranch. Making coffee in the kitchen the next morning, I watched three white horses nosing about their corral and, as I sat on the porch drinking my cup of joe, a couple of bunnies had their breakfast beneath an oak tree. The house sleeps up to eight people, and I began formulating plans for another road trip back here with nearly half-a-dozen friends. Because as any road-tripping Texan knows, once is never enough.