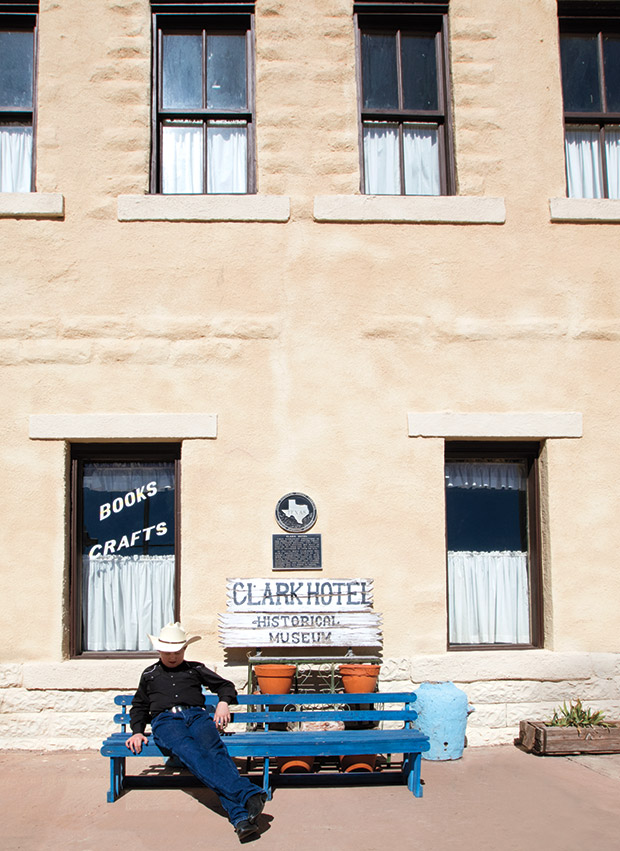 A comparison can be made of Van Horn, a dusty stop on the trek from Pecos to El Paso, and a barbed-wire fence stretched across a grassland plain. Both are windswept, catching and holding travelers or tumbleweeds as they pass by before releasing them onward. Barbed-wire likely appeared in this desert mountain country around the 1880s. Van Horn, then an outpost on the San Antonio-El Paso stage line, entered perhaps its most defining era within the same decade. The tracks and trains of the Texas and Pacific Railway rumbled through the community in 1881, delivering growth and prosperity in their wake.

By the end of the 19th Century, Van Horn had become a full-fledged town with an increasing population of travelers passing through the community, partaking of the meals and overnight accommodations offered by the Clark Hotel and, later, the Hotel El Capitan. Today, visitors continue to stop over on their way to parts west or east. But now the interstate overlays the wagon trail, parking spaces have replaced hitching posts, and historic buildings provide spaces for specialty shops or, in the Clark’s case, a museum. The El Capitan, restored to its original elegance, continues to offer comfortable rooms while local restaurants, including the Van Horn Cattle Company, Tortilleria Lizy, and Chuy’s Mexican Restaurant, have replaced rowdy Old West predecessors like the Bank Saloon.

Van Horn’s rise to permanence was not easy. The constant threat of Mescalero Apaches and the unpredictable nature of the surrounding frontier challenged preliminary efforts to establish a settlement, first prompted by the discovery of a water supply known as the Van Horn Wells. During its formative years, a handful of settlers made lasting contributions to Van Horn, including A.A. “Gus” Cox, whose son John E. Cox built the Clark Hotel. Also included is rancher A.S. Goynes, whose role in Van Horn lore represents the irony inherent in frontier history. After suggesting the community adopt the motto “This Town Is So Healthy We Had To Shoot a Man To Start a Cemetery,” Goynes obliged, dying from a gunshot wound he suffered during an argument with his brother-in-law. Allegedly, Goynes was the first to be buried in the local cemetery. In return, Goynes’ motto was memorialized on a painted sign, later hung in the Bank Saloon. A replica hangs in the Clark Hotel Museum today.

While Goynes exemplified the idiosyncrasy of Van Horn history, John E. Cox made his contributions in stone. One of his first buildings, a two-story, six-bedroom home constructed for his family, underwent a dramatic transition in the hands of a later owner, then was partly destroyed by fire. Today, the building’s odd, castle-like shell continues to be a popular sight with both locals and selfie-snapping visitors. Located across the street from the Culberson County Courthouse, the ruins are surrounded by a striking Victorian fence with star-topped pickets and ornamental gateposts.

Cox, in partnership with his brother, also built the Cox Building, which later became the Clark Hotel, now listed in the National Register of Historic Places as Culberson County’s oldest surviving structure. Built in 1901, the Cox Building first served as a small business complex. The property changed hands in 1903 but the Cox brothers regained ownership in 1905 and expanded the structure, building space for more offices, an opera house, the first county courthouse, a pool hall, a saloon, a watchmaker’s shop, and a meeting room for the Woodmen of the World Lodge. In 1918, the building underwent its most dramatic transition when Fred Clark Sr. bought the property and turned the entire complex into a hotel.

In many ways, the Clark Hotel embodies the rambling spirit that created Van Horn. Hemmed by a dry, calloused geography of jagged mountain ranges like the Sierra Diablos, the Apaches, and the massive Guadalupes, Van Horn and the Clark Hotel offered respite along a considerable stretch of inhospitable land, a circumstance that remains as real today as it did 100 years ago.

As a museum, the Clark provides a different sort of sanctuary. Comprised of large, high-ceilinged spaces on the first floor and a warren of hallways and rooms on the second, the Clark houses a considerable archive of folklore and historical artifacts. Constructed of adobe and concrete blocks manufactured on site, the building’s textured rectangles, made to look like rough stone, highlight door and window openings, indicating a division between additions and providing an idea of the staggered expansion that lasted for 28 years.

And like most frontier characters concealing a labyrinth of complexity behind a façade of good looks, the Clark has two faces. Today’s front was yesterday’s backside, modified to accommodate the arrival of the Bankhead Highway in the 1920s. One of the first transcontinental highways built in the country, the Bankhead bisected Van Horn on its way from Texarkana to El Paso, rerouting the town’s main street, which is now called Broadway Street, and still serves as Van Horn’s main drag. A stylistic distinction can be seen between the building’s original façade facing the railroad tracks, composed of a dozen bays with plenty of storefront windows and a wooden balcony, and its “new” front, an interpretation of 1920s modernism—clean lines, hard edges, and few frills.

Inside, however, the past and present collide in a cabinet of curiosities, as if the building had actually spun around in its Bankhead Highway realignment and tumbled a century of oddities into a half-dozen rooms. The collection represents decades of donations from area families as well as artifacts considered preservation-worthy by the town and county. The main room is dominated by an elaborate mahogany bar, a feature of the former Bank Saloon and imported from France in 1876. An afternoon of poking around adjacent rooms reveals mining implements, blacksmith tools, Native American artifacts, a horse-drawn buggy, cowboy trappings, and early chuck-wagon appliances. Upstairs, a series of rooms are outfitted to replicate frontier hotel rooms in the early 20th Century. The furnishings mix with pioneer jetsam like bonnets, bedclothes, buttons, and surprises like a braid of hair clipped from the head of some-one’s ancestor.

Outside, the surrounding town proves to be an equally compelling assemblage of history and rescued flotsam. Within a block of the Clark Hotel Museum on Broadway Street, Hotel El Capitan, designed and completed in 1930 by noted Southwest architect Henry Trost, adds a spark of retro cool to the surrounding Main Street. In 2007, Lanna and Joe Duncan of Fort Davis bought the El Capitan building, which at the time housed a bank, and restored it as a hotel, including the Gopher Hole restaurant and bar. The old Bankhead Highway route also abounds with flea markets, disgorging bargains and household remnants, as well as whimsical sculptures of giant insects, bottle trees, and dinosaurs by the late Big Bend artist Gerald Scott, who scavenged and then reimagined a junkyard of scrap.

Van Horn feels like a place for new beginnings as well as an opportunity to leave everything behind, a duality that has played out repeatedly here for over a century. “Are there ghosts?” a visitor asked while exploring the Clark Hotel Museum hallways. Likely there are, in the Clark and elsewhere across this enduring frontier town. The museum is a probable haunt, complete with dusky shadows and the sound of wind whistling between the bead board and the tongue-and-groove planking. But few spirits seem to stick around, eventually electing, like weekend visitors traveling through, to continue on down the road.