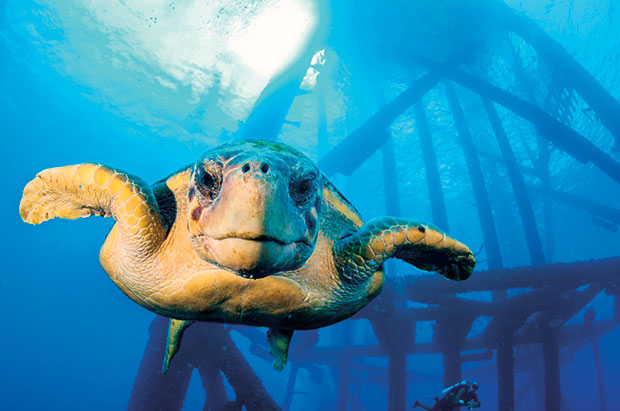 Padre Island National Seashore and Mustang Island State Park are two of the best places to view sea turtles in the wild:

Padre Island National Seashore hatchling releases are held May to August. For dates, check the park’s website or call the turtle hotline, 361/949-7163. To volunteer, call 361/949-8173 ext. 268. The seashore opens daily, and the visitor center opens 9-5 daily except Christmas. Entrance fee: $10 per vehicle, good for seven days.

Padre Island National Seashore is the epicenter of Texas turtle activity. It’s the only place in the state where nests from all Gulf of Mexico turtle species have been found, and it’s the base for sea turtle conservation programs that provide the public a chance to observe the ancient species in their natural habitat.

Every summer, from May to August, the park’s Division of Sea Turtle Science and Recovery holds public releases of baby sea turtles, mostly Kemp’s ridley hatchlings from eggs that were collected from beach nests and then reared in a local incubation facility. I’ve visited half-a-dozen times through the years to watch the little critters scurry down the beach to catch a wave and start their long swim out to floating mats of sargassum, marine algae that provides shelter and prey.

During the hour or so it takes for all of the baby turtles to make the trek from their nests to the water, park staff members bring around a hatchling to give visitors a close look and photo opportunity. In 2014, nearly 12,000 people attended 24 public releases.

Children and adults alike light up at the sight of the hatchlings, says Paula Baker, a veterinarian from Austin who has volunteered at the seashore for the past five years. “It’s very rewarding to be part of a group that’s trying to bring back a nearly extinct animal, an animal that’s almost extinct because of human impact,” Baker says. “It’s nice to have a part in trying to reverse that.”

Releases takes on greater meaning when considered in the context of the challenges facing sea turtles. Kemp’s ridleys, the most common nesting turtles at Padre Island, and four other Gulf sea turtle species are listed as threatened or endangered. Threats to their survival include development, fishing gear entanglement, pollution, poaching for food in many countries, and the effects of climate change—warmer sand affects hatchlings, warmer seas can change the abundance and location of food sources, and shifting ocean currents influence the drifting of young sea turtles and the migratory patterns of adults.

Kemp’s ridleys, the smallest sea turtles at no more than 100 pounds, are found in greater nesting numbers in Texas than anywhere else in the United States. They live throughout the Gulf of Mexico and along the U.S. Atlantic coast, where they eat crabs, fish, jellyfish, and mollusks. Kemp’s are the only sea turtles that lay their eggs in the daytime, nesting April through July. Kemp’s ridley nests in Texas rose steadily from 1995 to 2009. That trend then reversed, however, with decreases in 2010—the year of a 4.9-million-barrel oil spill in the Gulf—and in 2013 and 2014. 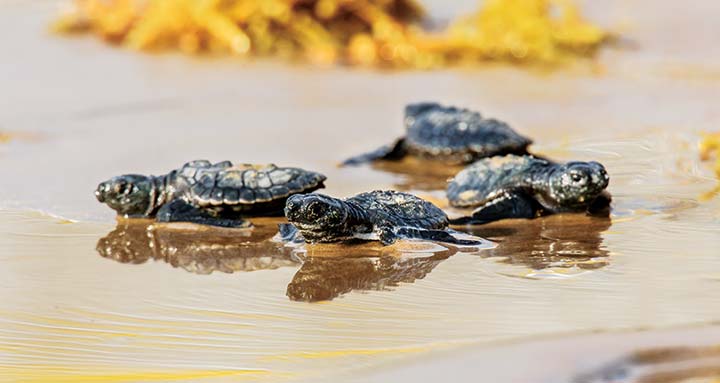 Scientists aren’t sure how the 2015 Kemp’s nesting season will turn out.

“When nesting was steadily increasing 12 to 19 percent per year, we could make predictions,” says Donna Shaver, chief of the Division of Sea Turtle Science and Recovery at Padre Island National Seashore. “Now that this trend is broken, it is difficult to say. We hope that more nests will be found during 2015, but we could have a third consecutive year of decreases.”

The good news is that around the world, responsible sea turtle tourism contributes to their conservation and protection. Tourism provides economic alternatives for locals and makes turtles worth more alive than dead. I had my first sea turtle encounter 15 years ago in Baja California Sur, Mexico, where fishermen who previously captured them for food now patrol nesting beaches for their protection. After that, I sought out the interesting reptiles whenever I traveled and eventually wrote a book about well-managed sea turtle ecotourism programs around the world.

The protection effort at Padre Island National Seashore relies on volunteers to help monitor 80 miles of beach for nests near the dune line. The public also finds many of them, so keep your eyes peeled. The Texas coast hosted 119 Kemp’s ridley nests in 2014, 72 of them at the national seashore. Volunteers attend training in February or March and sign up for patrol shifts April through July. “Finding a nesting turtle is an experience of a lifetime,” Baker says. “It’s a sight very few people have had the privilege to see.”

The only herbivorous sea turtles, greens weigh about 325 pounds as adults and nest from June to September in the southeastern United States, mostly in Florida, and on the coasts of Mexico and Costa Rica. Fifteen green turtle nests were found on the Texas coast in 2013, but none in 2014.

Although the only hawksbill nest documented on the Texas coast occurred in 1998 at Padre Island National Seashore, divers and deep-sea fishermen glimpse hawksbills—distinguished by their beautiful amber shells with black and brown markings—around artificial reefs or offshore platforms. Sightings of hawksbills and loggerheads—400-pound reptiles with large heads and powerful conch-crunching jaws—are a trip highlight for those who dive the coral reefs at the Flower Garden Banks National Marine Sanctuary, located 100 miles off the Texas coast. Two loggerhead nests were recorded on the Texas coast in 2014 and 13 in 2013. When it comes to leatherbacks, a 2008 discovery of the sea turtle’s nests at Big Shell Beach on Padre Island is the only known presence of the species in Texas since the 1930s.

Sea turtle encounters create wonderful memories, and once you’ve had one, you’ll probably want more, as I did. Beyond their tourist appeal, sea turtles are important to healthy oceans and coasts, too. For example, green sea turtles crop sea grass beds and help keep those important ecosystems healthy. In many places around the world, un-hatched eggs and shells contribute important nutrients to beach ecosystems, and hatchlings serve as prey for a variety of other animals.

“Just as important, though, every creature plays a role in a healthy ecosystem and its loss can have unforeseen consequences,” adds Shaver. “These creatures have existed for four million years, and human activity nearly eliminated them. Our job is to right a wrong by protecting the turtle’s place in the web of life.”