Sentinels of the Sea 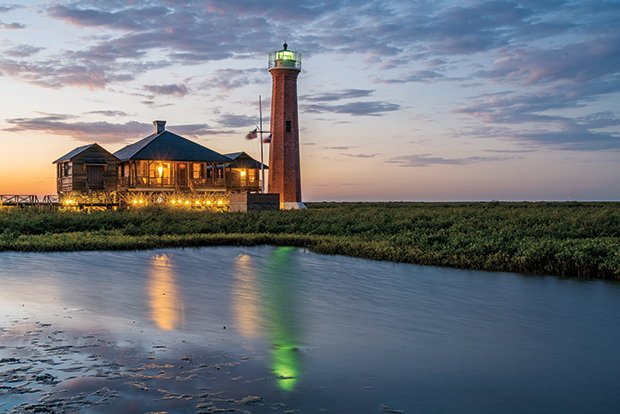 The first lighthouses came to Texas shores in 1852, built to guide ships past sandbars and shoals at river mouths and through tricky passes between barrier islands. The government constructed several types of lighthouses, including cast iron, masonry, wood, and screw-pile styles. While many have succumbed to storms, beach erosion, or demolition, six sturdy sentinels still mark our coast.

Built in 1858 in the middle of Matagorda Bay to warn ships away from a dangerous mud shoal, the Halfmoon Reef Light Station is the oldest surviving wooden lighthouse in the state. Perched above the waters of the bay on seven wrought-iron piles driven into mud and sand, it has a style known as screw-pile. The hexagonal structure built on top of the piling is the only surviving wooden lighthouse in Texas. Although diminutive, the lighthouse survived numerous hurricanes, including the calamitous storms of 1875 and 1886 that twice devastated Indianola. Finally, in 1942, a strong hurricane knocked it off its pilings.

After years of deteriorating in a Point Comfort yard, Mr. and Mrs. W.H. Bauer donated the lighthouse to the Calhoun County Historical Commission in 1979. The commission hauled it over the causeway to the side of Texas 35 in Port Lavaca where Michael Crain restored it as his Eagle Scout project. It’s easy to visit the lighthouse at its location at the Bauer Community Center, where the beautifully restored building is a major landmark popular for weddings. 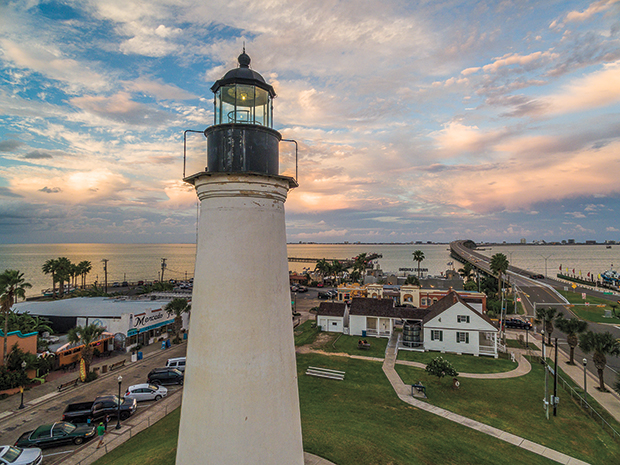 The only lighthouse with its tower open to visitors sits on the southern end of the Texas coast across from South Padre Island. The U.S. government built the 50-foot brick lighthouse in 1853 on the site of a supply depot used by Gen. Zachary Taylor during the Mexican-American War. Located on the south end of Laguna Madre, the light guided sailors around South Padre Island through Brazos Santiago Pass to Port Isabel, then known as Point Isabel.

As with other Texas lighthouses, Civil War battles damaged the Point Isabel Lighthouse. Fortunately, the tower was built to last and was fully repaired and back in business by 1866. By the end of the 19th Century, commercial shipping in the area had declined, and in 1905 the lighthouse was closed and left to decay. However, in 1950 the Texas Parks and Wildlife Department’s predecessor agency acquired it through donation by private owners. Two years later, Texas designated the lighthouse a state historical site.

After a year of restoration, the lighthouse reopened for visitors on January 23, 2018, and is normally open daily from 9 a.m. to 5 p.m. The lighthouse lies along Texas 100 in the middle of Port Isabel. Visitors can climb the 74 steps to the top and step out onto the lantern room’s balcony. 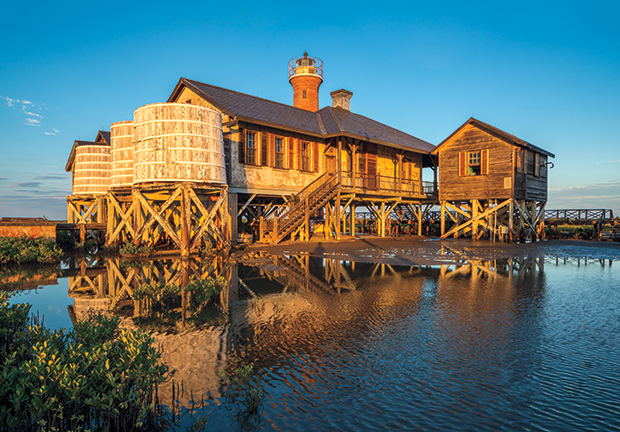 The Aransas Pass Lighthouse—sometimes called the Lydia Ann Lighthouse—first sent its beam across the waters near Port Aransas in 1857 to guide ships into Corpus Christi Bay. It didn’t shine long before Confederate troops blew up the top 20 feet of the tower to prevent Union troops from using it as a lookout. By 1867 reconstruction was done, and the light re-entered service.

Over the years, Aransas Pass slowly shifted south away from the lighthouse, making it less and less suitable for guiding ships into the bay. In 1952 the Coast Guard closed the lighthouse and built a new automated light on a metal skeleton tower on the south side of the pass. Private owners acquired the Aransas Pass Lighhouse in 1970. The current owner purchased it in 1973 and began a major restoration. The site now looks much as it did in the 1940s. The tower was relit in 1988 as a private aid to navigation.

You can see the lighthouse to the east of Texas 361 across the salt marshes as you approach the car ferry from the town of Aransas Pass and from the channel’s shore on the north side of Port Aransas. For a close-up view, you can boat very near the lighthouse, but you can’t dock your boat because the island is privately owned. 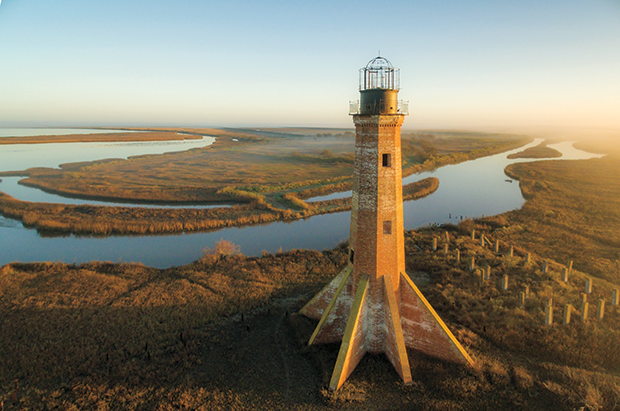 Perhaps a story on Texas lighthouses shouldn’t include Louisiana’s Sabine Pass, but the U.S. Navy built the lighthouse in 1857 to protect major Texas ports. Although the light lies on the Louisiana side of the Sabine River, the best view of it is from Texas. Like many Texas lighthouses, it played a part in the Civil War. During the course of the war, both sides used the tower as a spy platform. After the war, the light continued to guide mariners to the mouth of the Sabine River. When nearby jetties were built and a new light was installed at the end of the east jetty, the Sabine Pass Light became obsolete. It shone its last light in 1952.

For the best view, drive south of Port Arthur to the village of Sabine Pass and take Farm-to-Market 3322 past Sabine Pass Battleground State Historic Site. Several large oil and gas service industries line the Sabine River on the east side of the road. The best view is just past the last major industrial yard. If you want to get closer, you can launch a boat from the battleground’s boat ramp and cross the channel.

Today the Bolivar Point Lighthouse looms quietly over the marshes of the Bolivar Peninsula across from Galveston Island, but the tower saved more than 100 people during the deadliest natural disaster in American history, the Galveston Hurricane of 1900. As the sea level rose and 120 mph winds howled around the swaying tower, terrified people jammed their way up the interior stairs. The 15-foot storm surge pounded debris into the sides of the 117-foot, brick-lined, cast-iron tower. When the storm ended, shell-shocked survivors emerged to find bodies all around and nothing else standing.

Since its reconstruction in 1872 after the original lighthouse was destroyed during the Civil War, this hardy tower has withstood numerous other storms. To visit the Bolivar Point Lighthouse, you can take the car ferry from Galveston to Port Bolivar and follow Texas 87 a short distance to the lighthouse. You can’t miss it; the tower and keepers’ quarters adjoin the highway. The site is privately owned, so be sure to stay in the highway right of way.

The Matagorda Lighthouse was built in 1852 to mark the entrance of Matagorda Bay for the ports of Indianola and Port Lavaca. During the Civil War, Confederate forces tried to blow up the tower, fearing Union troops would capture it and use it for a lookout. After the war, the Lighthouse Board dismantled the tower and put the pieces in storage. The cast-iron tower was rebuilt in 1873 on the west side of Pass Cavallo. The lighthouse served as an active navigation aid until 1995, when the Coast Guard closed it. In the late 1990s, Houston oilman Dewey Stringer led a push to restore the decaying tower, starting by re-lighting the tower December 31, 1999, to welcome the new millennium. Restoration was completed in 2004.

The Matagorda Lighthouse is publicly accessible, located in the Matagorda Island Wildlife Management Area, but is a bit of an adventure to visit. It requires boating to the docks on the Espiritu Santo Bay side of the island from Port O’Connor. From there you can either hike or mountain-bike three miles to the lighthouse on island roads. The tower and adjoining cemetery can be visited, but the lighthouse interior is closed.