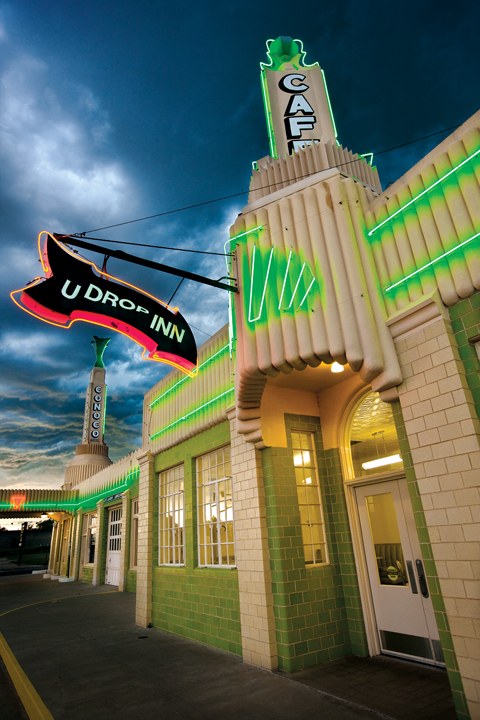 Built in 1936 and restored in 2002, Shamrock’s Tower Conoco Station and U-Drop Inn now serves as a visitor’s center. On Thursday nights during the summer, the landmark hosts live music. (Photo by J. Griffis Smith)

Route 66 first enticed adventure-seekers on a transcontinental journey from Chicago to Los Angeles in 1926. Ever since, cross-country travelers have heeded the call to hit the open road in pursuit of freedom, new beginnings, and the rewards of a fresh experience.

Get Your Kicks on 66

The Great Race, a national classic car rally, makes an overnight stop in Amarillo on Monday, June 22. The first of 120 antique cars will arrive along SW 6th at Florida about 4:45 pm., at the finish of the day’s rally. Check out the cars that will be viewable for a couple of hours after the finish.

Although the interstate highway system eventually pulled traffic away from this legendary artery of American heritage, Route 66 devotees can still explore much of the storied route. Texas claims 178 miles of the old road, much of it still intact as it parallels Interstate 40 across the top of the Panhandle prairie from the Oklahoma border westward to the New Mexico state line.

On a recent spring weekend, I chased the sun as I explored the famous road’s Texas stories.

Just 14 miles west of the Oklahoma-Texas line, Shamrock rises from the plains with a smattering of Art Deco buildings that date to the 1930s and 40s, when westward travelers stopped here en route from points east. I ponder the millions of life dramas that have played out—and still play out—along this highway.

Christened the “Mother Road” by Nobel Prize-winner John Steinbeck in his classic novel The Grapes of Wrath, Route 66 served as America’s main artery west during the devastating Dust Bowl of the 1930s. When World War II erupted a decade later, the route funneled wartime supplies to the West Coast. Then, in the 1950s and 60s, as the heartland rebounded, car-crazy travelers rediscovered Route 66 as a thoroughfare to western vacation destinations, ushering in an era of neon-lit motor courts and cafés, kitschy tourist stops, curio shops, and roadside billboards.

One of the finest examples of Route 66 Art Deco architecture has been preserved and restored here in Shamrock: the Tower Conoco Station and U-Drop Inn, a National Historic Site. The building now serves as the local chamber of commerce, and it features a neon-festooned tower, walls of glazed tile, and intricate, geometric details on the fueling canopies and in the lobby. Kids especially get a big kick out of the place, which inspired the body shop in the Disney/Pixar film Cars.

Continuing my westward path, just before I cross the line into Gray County, the road begins a gradual climb onto the Caprock. Patches of trees appear in the occasional draw, cattle graze behind barbed-wire fences, and I spy a mural painted on the side of a small ranch building. As the sun climbs higher into the brilliant morning sky, it paints the prairie grasses shimmering silver.

In the 1950s and 60s, travelers rediscovered Route 66 as a thoroughfare to western vacation destinations.

In the 1940s and 50s, advertisers discovered the power of roadside billboards, and Route 66 travelers could count on Burma-Shave signs—which appeared in a series of five— to provide a rhyme and a humorous message. Someone in McLean, about 21 miles west of Shamrock, has paid homage to the classic campaign with signs that read: Going East— or Going West—Route 66—Does it Best—McLean, TX.

Route 66’s role in popular culture remains strong, I think. No wonder that Bobby Troup’s catchy 1946 song “(Get Your Kicks on) Route 66” has been recorded dozens of times by artists ranging from Nat King Cole to the Rolling Stones.

In McLean, I stop for a few hours to explore, starting with the small but carefully curated Devil’s Rope and Route 66 Museum. A detailed barbed-wire (devil’s rope) exhibit illustrates the arduous work required in fencing big, open country. In one hallway, a collection of wildflower photography highlights scenes from a nearby ranch. A comprehensive exhibit on the evolution of the American cowboy features brands from dozens of Panhandle ranches, as well as those from famous folks like Teddy Roosevelt (a Maltese cross) and LBJ (his initials).

The museum provides insight into the Dust Bowl era with a collection of stark, black-and-white photographs, including grim pictures of homes buried in sand and fam­i­lies making tent camps around their cars. While many fam­­ilies fled the plains in hopes of a better future out west, many remained to tough it out. I’m startled to see a joyful image of three girls laughing as they bathe in a galvanized tub, and I’m reminded of the resilience of the human spirit.

In another section of the museum, I find a McLean café replica from the boom period and loads of scrapbooks depicting the town in the 1950s. A small gift shop offers souvenirs—magnets and mugs and books—and I buy a book of retro Route 66 postcards on the way out.

Before leaving town, I stop to photograph a landmark from 1926—a restored Phillips 66 station, flanked by a vintage gas truck and orange pumps. With its brick exterior and high, pitched roof, the building resembles a dollhouse more than a gas station, and it reminds me of how car culture has changed. In those days, wrote Michael Karl Witzel and Gyvel Young-Witzel in their book Legendary Route 66, “It was full-service all the way.” 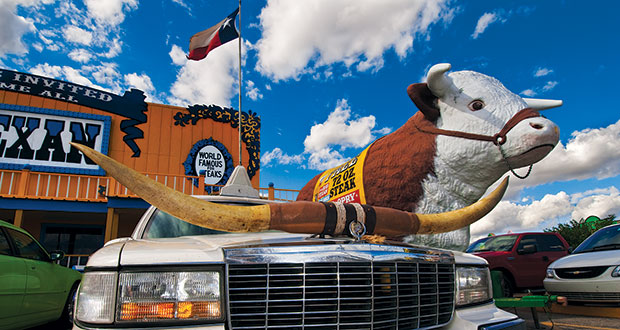 Along some parts of the road, it’s easy to hop on I-40 and watch for the brown “Historic Route 66” highway signs that indicate how to find the old road again. I take one of these exits at Groom, where a 190-foot-tall white cross was erected in 1995; you can see it from 20 miles away. Tumbleweeds roll across the streets as I explore. An abandoned 1940s motor court once welcomed weary travelers, but the town is quiet these days, and I don’t find much besides the Blessed Mary Restaurant, advertising a menu of burritos and tacos; and a tiny downtown grocery store serving those who have opted to stick around. A leaning red-and-white water tower here no longer functions but serves as a good photo subject.

Wheeling into Amarillo on Interstate 40, I exit Georgia Street and follow it north to West Sixth Avenue, a section of Route 66 that still bustles. Crowded next to one another on both sides of the street, art galleries, cafés, bars, and antiques shops flourish. I stop in at the famous Golden Light Cafe for a 6th Street Special, a thick burger patty folded into a grilled flour tortilla with sautéed onions and jalapeños. Across the street, Copper Horse Antiques tempts me with vintage cowboy boots; a child’s red Roy Rogers guitar, still in its original 1950s box; a black-and-white photo by livestock photographer Frank Reeves, who documented the cattle industry from 1914 through the 1970s; and a mid-century tablecloth printed with stylized images of cacti.

I’m driving west from Amarillo on I-40, and I want to see Cadillac Ranch, an outdoor art installation that embodies the inventive spirit of Route 66. In 1974, local eccentric mil­lionaire Stanley Marsh 3 collected 10 Caddies from the late 1940s to the early 1960s, and then buried them nose-first at a spot south of I-40 about a half-mile from Route 66, their tails exposed so as to suggest the Pyramid of Cheops in Egypt. They were later moved farther west. Like most visitors, I take a few photographs. The car fins have been painted, repaint­ed, and graffiti-decorated since the beginning.

Driving on, I’m captivated by the whirling blades of thousands of wind turbines, and soon, I approach the town of Vega, which lies at the intersection of US 385 and the old road. A 1920s Magnolia gas station has been fixed up, but the little museum inside keeps limited hours.

Across the street, Roarke’s Hardware dates to the 1920s. And just west of the town square, Dot’s Mini Museum showcases such conversation starters as cookware used during the Dust Bowl era and a huge tree strung with dozens of pairs of cowboy boots. Nearby, Boot Hill, an Old West-style restaurant and saloon that opened in 2007, has become a destination for food and drink; owner-chef Rory Schepisi first visited Vega from Los Angeles in 2004 to film a reality show and decided to stay. 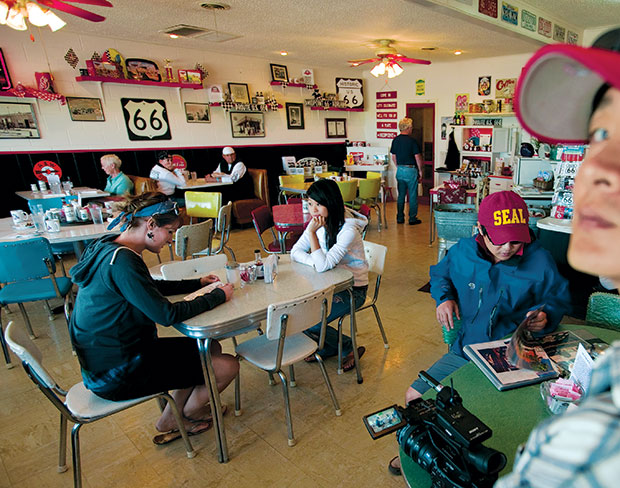 Griddle-cooked burgers and deep-dish pies star at the MidPoint Cafe in Adrian, which inspired Flo’s V8 Café in the Disney/Pixar film Cars.

I save my sweet tooth for dessert at the MidPoint Cafe, a Route 66 landmark in the hamlet of Adrian, about 14 miles west of Vega. The town and café sit at the Mother Road’s halfway point; a sign outside notes that Chicago and Los Angeles lie 1,139 miles in either direction. Inside the cheery, red-and-white dining room, I find myself melting into a piece of chocolate-peanut butter cream pie, a dreamy creation cradled by a buttery, flaky crust. The menu boasts that this is the “home of the ugly crust pies,” and I cannot imagine why. I ask for the backstory, and my waiter tells me a tale of an overworked baker and a helpful friend who offered to help with the café’s pie load, but couldn’t make a pretty crust. That was a long time ago, but the story has stuck around. After checking out the cool Route 66 souvenirs in the café’s store, I head out again.

Driving the remaining 23 miles to the New Mexico state line, the landscape appears flatter than ever, then sud­denly changes into a stretch of mesas, buttes, and scrubby swells of red dirt with small peaks sprouting cactus and mesquite. At the sign for Exit 0, Glenrio, I hop off I-40 and follow the Old Route 66 sign pointing south. After about a mile, I arrive in the ghost town of Glenrio. Cactus threatens to bury a crumbling motel; its adjacent café probably once served west­ward tourists elated to have passed the half­way point to California. Fragments of a sign advertise “The Last Motel in Texas,” but I can’t find the building. Abandoned truck skeletons rust in the elements.

I can’t help but consider the irony: A road that provided so much hope now sits nearly deserted in places. But then I spot a few newer cars in front of a house, with horses off to the side, and I smile. Someone is still making a living here, and people like me still visit to try to connect with the past. Perhaps we’re all searching for new beginnings and new adventures, even if it’s just an extraordinary road trip on Route 66 through Texas.

It’ll take at least two full days to explore the Texas section of Route 66, and that’s an ambitious schedule. Pick up a map at the Texas Travel Information Center (exit 76 on the south side of I-40 in Amarillo), 806/335-1441. The Amarillo Convention & Visitor Council (800/692-1338) can provide details about destinations along the entire 178-mile stretch. Selected contacts follow.

Shamrock Chamber of Commerce, inside the restored Tower Conoco Station, 806/256-2516.