The Pulse of Port Arthur

Passing a good time at the tip of Southeast Texas

Written by Lois Rodriguez, Photographs by Will van Overbeek | From the January 2015 issue | Updated: June 12, 2020 | Filed Under: TRAVEL 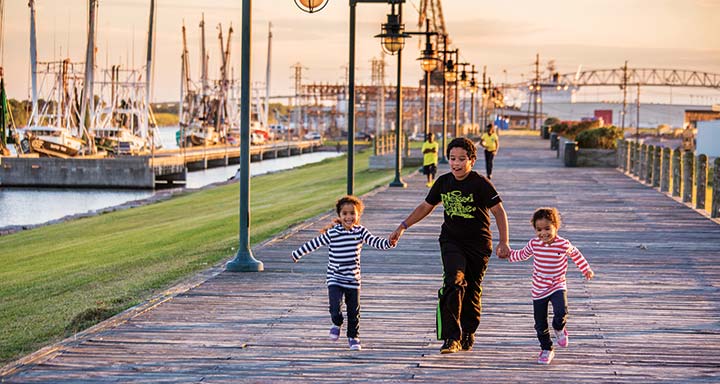 For a music fan like me, one particularly good reason to visit Port Arthur is the blues-rock singer Janis Joplin. Though she died in 1970 at age 27, the powerful and flamboyant vocalist remains this city’s most famous native and, thanks to a fantastic exhibit at its Museum of the Gulf Coast, the focal point of a significant tourist attraction.

The permanent exhibit features a full-sized replica of Joplin’s 1965 Porsche coupe, colorfully decorated with hand-painted psychedelia, a vivid reminder of the hippie spirit Joplin came to embody—and the commercial success she achieved before a deadly accidental overdose.

But this archive of collectibles also offers more to ponder about Janis. There’s a multi-headed bronze bust, mounted on a marble pedestal, comprising five life-size versions of Joplin’s face. Glass cases along the walls display rare posters, album covers, copious personal photographs, and poignant handwritten notes. Several of Joplin’s paintings reveal that she first aspired to visual artistry before singing her way into history. A longtime fan, I linger over each item for new insight into the enigmatic singer.

Given its location in the extreme southeastern corner of Texas and its status as an industrial hub, Port Arthur might escape the attention of some leisure travelers. But Port Arthur and its neighboring burgs have charms to offer, especially for devotees of cultural history and music, as well as a coastal environment that’s rich with opportunities for fishing, bird watching, and boating. 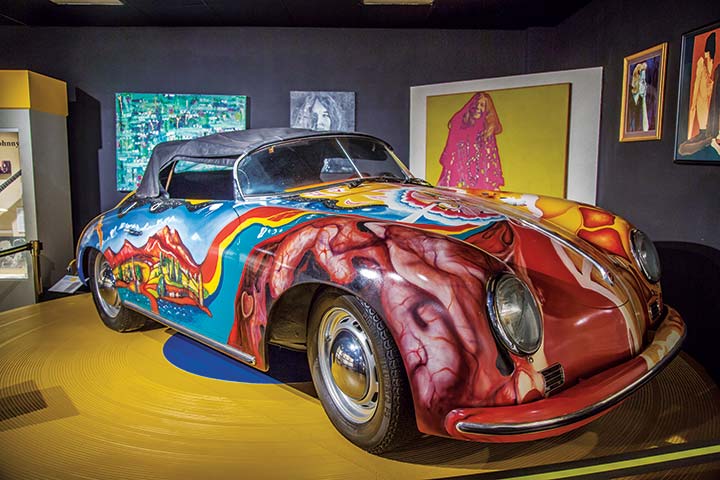 Incorporated in 1898, Port Arthur changed forever with the 1901 discovery of oil at Spindletop Hill near Beaumont. The petroleum industry has ruled the region’s economy ever since, as evidenced by the many refineries and petrochemical plants in the area. Oil money fueled the construction of the architecturally impressive buildings that make up much of the central business district along Port Arthur’s Procter Street, such as the now-empty 1929 Beaux-Arts-style Hotel Sabine. While Port Arthur’s downtown has been partly vacated as businesses have moved farther inland, revitalization efforts are underway. The refurbished Classical Revival-style 1930 First National Bank building is reopening in January 2015, and the city recently built the Downtown Procter Street Pavilion, which hosts the city’s annual Mardi Gras celebration and other events.

The Museum of the Gulf Coast is downtown, too. While the museum’s focus encompasses the upper Gulf Coast from east of Houston to west of New Orleans, its special emphasis is the Texas “Golden Triangle” defined by Port Arthur, Beaumont, and Orange. The 39,000-square-foot facility offers an eclectic mix of permanent exhibitions ranging from natural history to popular culture. On the ground level, a spectacular mural and diorama, two stories tall and 125 feet long, summarizes the region’s history in a single view—from volcanoes and dinosaurs to Native American tribes, European explorers, the Civil War Battle of Sabine Pass, and the oil gushers of Spindletop.

Upstairs, there are galleries devoted to seashells; decorative arts; the mixed-media artist Robert Rauschenberg, a Port Arthur native whose genre-blending innovations helped define postmodern painting; and sports legends, such as former Dallas Cowboys coach Jimmy Johnson, another native. But the museum’s largest and most visited wing is its Music Hall of Fame.

For me, it’s an exhilarating gold mine of memories and insights extending far beyond Janis Joplin. Documenting the careers of more than 60 artists and groups, the exhibits commemorate the musical talent that emerged from this area to reach international acclaim. Using memorabilia, photographs, text, and interactive audio-visual touchscreens, the museum celebrates the legacies of local musicians like Saratoga-born country crooner George Jones; early pop-rock dynamo “The Big Bopper,” who was born J.P. Richardson in Sabine Pass and perished in a tragic 1959 plane crash along with Buddy Holly and Ritchie Valens; bluesman Clarence “Gatemouth” Brown, who famously sang that he was “born in Louisiana and raised on the Texas side;” zydeco monarch Clifton Chenier, a Louisianan and former Port Arthur resident; blues-rocking brothers Johnny and Edgar Winter from Beaumont; and the rap duo known as UGK (Underground Kings), a self-made Port Arthur outfit that rose to the top of the hip-hop world in the late ’90s and early 2000s.

“Who really knows what’s in an area that drives a phenomenon like that?” says museum Director David Beard, referring to the Golden Triangle’s remarkable concentration of musical talent. “A quirk of geography? The economic booms of the petroleum industry that attracted people from all over the country, bringing with them whatever lineage or talents that sprang up with the next generation? It’s anybody’s guess.”

Various styles of Janis Joplin T-shirts and related souvenirs, including bricks salvaged from her childhood home, constitute much of the inventory in the museum gift shop. Clearly this countercultural icon is the institution’s most popular draw. In fact, according to Beard, most visitors from beyond the region, especially foreigners, arrive here specifically on Janis Joplin pilgrimages. 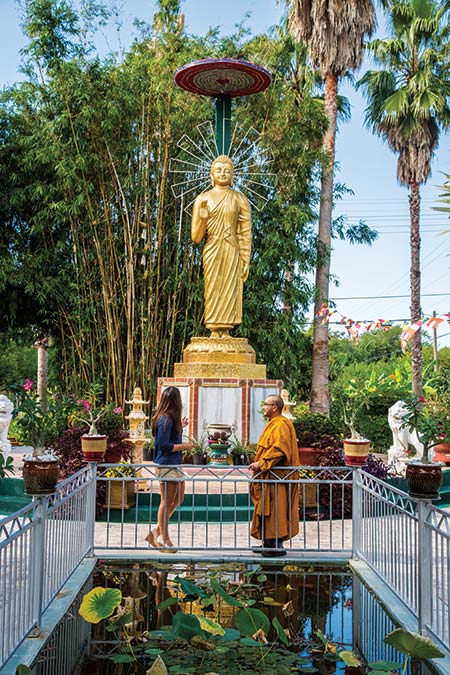 When it comes to outdoor activities, locals point to abundant fishing (redfish, flounder, and speckled trout) and crabbing opportunities at places like Sabine Lake; the piers on Pleasure Island; the Neches River; Sea Rim State Park; and the Gulf of Mexico. Located on the Central Flyway, the Port Arthur area commonly attracts migratory birds, particularly at the Texas Point and
McFaddin national wildlife refuges—also home to the state’s densest concentration of alligators.

For a taste of seaside cuisine, I head a few miles northwest on Twin City Highway to Nederland, home of Sartin’s Seafood, a casual eatery with rustic décor. Sartin’s is famous for its signature “BBQ Crabs.” Actually deep-fried in a spicy-salty Cajun seasoning mix, the crabs are served on large platters accompanied by metal buckets for shell disposal.

The next day, I visit the gardens of Port Arthur’s Buu Mon Buddhist Temple, renowned for its annual lotus festival (celebrated the first weekend of June) but accessible year-round by request. Established in Beaumont in 1980 as the area’s first Buddhist center, the Buu Mon temple moved to Orange and then Port Arthur, where it was dedicated in 1987. In the gardens, amid the sound of water falling into well-tended pools, I observe koi fish and water lilies. Abbot Tri Quang, a Vietnamese monk, guides me to a plaza featuring a 25-foot-tall golden-hued statue of the Buddha.

Later, I drive a few miles north into the town of Groves for a visit to Larry’s French Market & Cajun Restaurant. The Cajun seafood buffet and other menu options like steak, chicken, and crawfish are obviously popular in this packed house, but I’ve come to witness singer Jivin’ Gene. In the Music Hall of Fame at the Museum of the Gulf Coast, I had read about his 1959 breakthrough recordings, including “Breaking Up is Hard to Do.” Now I am entranced by his live renditions of those and other songs. Jivin’ Gene belts out swamp-pop classics to an enthusiastic audience, especially the many couples, young and old, who crowd the dance floor.

The venue’s proprietor, Larry Judice, emphasizes family history, locally sourced fresh seafood, and live music (Thursday through Saturday nights) as keys to his success. “When we have the bands,” he says, “it’s just like a fais-do-do, a Cajun house party, with all the different generations passing a good time together.”

Indeed, as I depart, I relish the sense of community at the southeastern tip of Texas, where the steamy, gumbo-like blend of culture, industry and ocean creates a travel experience you’re not likely to find anywhere else in the state.