... even if some folks don’t get the letters quite right, a Big Bend insider reveals the mystique of MARFA

Written by Art Williams, Photographs by J. Griffis Smith | From the January 2013 issue | Updated: May 21, 2019 | Filed Under: HistoryTRAVEL 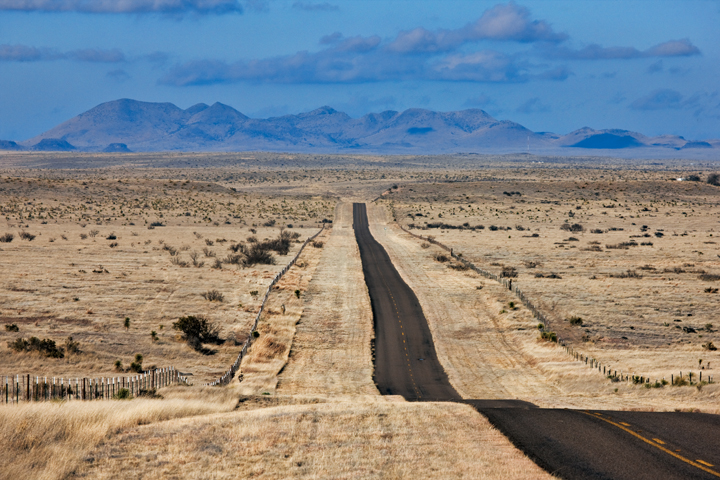 Ranch Road 2810 streaks through the Chihuahuan Desert into the town of Marfa, which sits between three mountain ranges. (Photos by J. Griffis Smith)

This exchange happens often, and because I actually worked to build tourism in Marfa, it still surprises me that many folks—especially Texans—don’t know about Marfa. After all, it’s mentioned regularly in The New York Times as well as in countless international publications. Marfa is a regular stop for art pilgrims and patrons from all over the world, and the town serves as a getaway for celebrities and experienced travelers.

On any given day (or evening) in Marfa, a visitor can experience critically acclaimed art installations, hear a poetry reading at the Marfa Book Company, share a potluck dinner under the stars at El Cosmico, or join a creative workshop for kids and adults at the Crowley Theater. Depending on your mood, you can take in the premiere of a theatrical production, savor four-star cuisine, or just enjoy exceptional weather and scenery on the mile-high Texas prairie.

In spite of the varied options, most folks, if they’ve heard of Marfa at all, are aware of its two most common claims to fame: as the site of the Mystery Lights, which occasionally (and unexplainably) glow east of town, and as the location for the classic movie Giant, considered the Lone Star State’s Gone With The Wind big-screen epic, starring James Dean, Elizabeth Taylor, and Rock Hudson.

Marfa remains an enigma, and even longtime citizens can’t quickly explain the intrigue created when ranching heritage, art connoisseurs, writers, musicians, and foodies collide and join forces on the high plateau. Some might say that the vast sky and quality of light remind them of northern New Mexico or a favorite Italian landscape.

Long before Marfa was the darling of The New York Times, I knew it as the site of world-champion glider flying. My father’s aviation business offered glider training, so I heard him and other pilots rave about the “uplifts” in Marfa, created by the winds’ interaction with the surrounding mountains. Gliding is still popular here and is an appealing activity to the adventurous traveler.

As a native Houstonian, the prospect of mountains in Texas has always intrigued me. So in 1972 I took my first road trip to the mountains of Big Bend. Of course, we planned a side trip to see Marfa and the Mystery Lights. Rolling into town on US 90 just after 5 p.m., we stopped at the only four-way blinking red light (there’s still just one traffic signal in Marfa). The town seemed nearly deserted.

Looking north up Highland Avenue, we saw the 1886 Presidio County Courthouse—one of the prettiest courthouses in Texas—in the middle of the square, among the one- and two-story buildings. Highland Avenue, Marfa’s main commercial street, was (and still is) a four-block stretch of remarkable and beautiful architectural heritage.

This was before world-renowned contemporary minimalist artist Donald Judd relocated to Marfa from New York City in the 1970s. He purchased several large buildings and the decommissioned cavalry post and installed large artworks of his own design, as well as works by other world-famous artists who happened to be his friends.

Most observers say Judd, along with his contemporaries and followers, saved Marfa, but a handful of holdouts aren’t as positive in their assessment. Either way, it is safe to say that without Judd’s influence and contribution, Marfa might have passed the point where its impressive buildings could be saved and restored.

The transformation came about over a two-decade process that hit its stride in the early 1990s when media buzz created a real-estate boom. Adobe houses and buildings sold at several times their assessed value, commercial buildings were remodeled, and several new businesses opened their doors.

Of all the places in far West Texas and the Big Bend country for which I held so much affection, Marfa was at the top of my list. So when a job opportunity arose there in 2011, I jumped at the chance to make the move.

I arrived in the midst of an historic drought, two days after one of the worst wildfires in Texas history had ignited just west of town, then raced northeast and destroyed homes in Fort Davis along with thousands of acres of ranch land.  This was, literally and figuratively, baptism by fire. While the threat of more wildfire lingered, Marfa was about to host a traveling music festival called Railroad Revival, which would attract enough visitors to double the size of the town and tax all our resources—law enforcement, fire and emergency services, accommodations, and even food and cell phone service.

The Fort Davis house fires were still smoldering when Marfa residents started organizing a benefit for the victims. A local artist created graphically dynamic burn ban/fire danger posters for distribution throughout the area, and citizens volunteered to help feed, house, and welcome the 2,000 concert-goers descending on tiny Marfa.

This gave me true insight into the soul of the community. Naysayers said the town was populated by aimless 20-somethings, drifting artist-types, wealthy absentee vacation homeowners, and eccentric society dropouts. After living, working, volunteering, and participating in Marfa for 18 months, I came to know a friendly, compassionate, caring, and hard-working citizenry.

The influx of creativity has created a synergy in town that one might find in a particular resurgent neighborhood in a large city. But in Marfa, population 1,981 and a three-hour drive from the nearest airline service in El Paso or Midland, the influence of creative newcomers makes a dramatic impact.

Marfa’s unusual name is attributed to Hanna Maria Strobridge, wife of railroad executive James Harvey Strobridge, who directed the first transcontinental railroad in the 1860s and again the southern route two decades later. According to legend, Mrs. Strobridge accompanied her husband on his cross-country rail construction treks, and was given the honor of naming the water stops along the route as it progressed westward.

As an avid reader, she bestowed such literary names along the way as Dryden, Longfellow, and the odd name of Marfa, long thought to come from a character (Russian for “Martha”) in Fyodor Dostoyevsky’s novel The Brothers Karamazov. However, an etymologist researching the issue determined that Hanna Strobridge likely named the town for a character in the Jules Verne novel Michael Strogoff (1876).

After the turn of the century, a cavalry post that became Fort D.A. Russell (later purchased by Donald Judd, and current site of the Chinati Foundation) was established to protect the U.S.-Mexican border during the Mexican Revolution. The post was decommissioned in 1933 but later reactivated during World War II as a German prisoner of war camp.

In 1942, soon after the U.S. entered World War II following the attack on Pearl Harbor, an Army Air Training Base was established east of town, near the present site of the Marfa Mystery Lights viewing area. The Marfa Army Air Base trained 8,000 bomber pilots during its four-year operation, and closed at the end of the war. All that remains of its dozens of barracks, halls, and large hangars—the faint remains of the mesquite- and yucca-overgrown runways—can be seen only by air.

The only remaining World War II-related structure to survive was the 1942 USO Hall, constructed in town to allow civilians to mingle with the military personnel for social events. The City of Marfa has refurbished the hall, and it now serves as a conference and event center.

The 70-year-old hall is barely changed from its original appearance, and displays hundreds of photographs of Marfa and Presidio servicemen and -women, from the cavalry days through the present, as well as other military memorabilia. The walls surrounding the vaulted, trussed ceilings in the main hall are lined with the military insignia of all the units represented by those who served.

The filming of Giant in 1956 brought fame to Marfa, as the film was much publicized and drew major Hollywood stars to town, where they stayed in the Spanish Colonial-style Hotel Paisano. But after the production left, the town population continued to shrink, businesses closed, and the new Interstate 10 siphoned traffic off old US 90.

Enter Donald Judd, searching for a remote, wide-open location to house his large, contemporary art pieces in a permanent setting. He was joined by such eminent artists as Claes Oldenburg, Dan Flavin, and John Chamberlain, whose works are now permanently installed in open fields, and housed in large bank and commercial buildings, and even a former wool and mohair warehouse.

Even with all the changes, the ranching and railroading heritage of the old Marfa is never far away. Sidewalk diners outside Maiya’s Restaurant on Highland Avenue or the outdoor patio of nearby Cochineal hear the sounds of the train as it roars through town. And the occasional 18-wheeler double-decker cattle truck still rumbles down US 90. Marfa’s historic roots and the quirky, surprising, and beautiful West Texas landscape merge into its contemporary mystique.