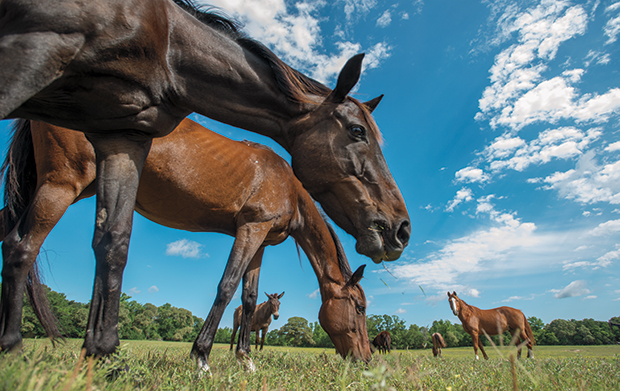 The Cleveland Armory Black Beauty Ranch in Murchison is home to about 900 rescued animals.

On the outskirts of Murchison in East Texas, a sprawling animal sanctuary has provided a home for rescued animals for nearly 40 years. With more than 40 species—ranging from American bison to Asian water buffalo, giant tortoises, llamas, and chimpanzees—Cleveland Amory Black Beauty Ranch provides a home to 900 animals, which outnumber the human population of their hometown by 30 percent.

Cleveland Amory Black Beauty Ranch, 12526 County Road 3806 in Murchison, offers guided tours by appointment, once or twice a month. Prices start at $72 for adults and $18 for children with package deals available for families or groups. Call 903-469-3811.

The late animal-rights advocate Cleveland Amory founded Black Beauty Ranch in 1979 as a home for Grand Canyon wild burros that had been targeted for extermination. The easterner chose East Texas because of the good grass for horses and relatively inexpensive land. A prominent journalist and TV commentator from the 1940s to the 1990s, Amory named the 1,400-acre refuge for the popular Anna Sewell novel about a 19th-century London workhorse, Black Beauty.

Today, Black Beauty Ranch offers monthly tours of one of the world’s largest, most diverse animal sanctuaries. While the tours delve into difficult stories of animal cruelty, neglect, and exploitation, visitors also get to see the wild and domesticated creatures living peacefully in a natural setting and learn about their care and rehabilitation.

The tours start at the visitor center with a video about Amory’s history, including his service in World War II and his high-profile jobs as editor of The Saturday Evening Post and chief critic for TV Guide. Amory founded The Fund For Animals in 1967 and was one of the nation’s most outspoken animal advocates until his death in 1998. The Fund, which operates several animal sanctuaries in addition to Black Beauty Ranch, merged with the Humane Society of the United States in 2005.

The ranch started offering public tours in 2016 to “educate the public on why the animals need to be rescued,” says Noelle Almrud, Black Beauty’s director. “If people are informed how to make better choices for animals—like exotic animals don’t make good pets, or horses are companion animals that shouldn’t be discarded when they are no longer useful—we can hopefully reduce the need for rescues in the future.”

After the introduction, guests board a 25-passenger van with windows that have been darkened to prevent the animals from seeing inside. Because Black Beauty Ranch is a refuge and not a zoo, visitors must remain inside the van during the tour to reduce stress on the animals.

The first stop is Primate Alley. If you’re lucky, you may hear the siamang gibbons and their neighbors, the white-handed gibbons, whooping and wailing. This cacophony, known as territorial vocalization, can be heard up to three miles away, says Rebecca Woodward, the ranch’s primate team leader.

The primates—chimpanzees, gibbons, capuchins, and macaques—live in large outdoor enclosures with fruit trees, swings, footbridges, and hammocks intended to replicate a treetop habitat. In the winter, indoor heated spaces offer shelter from the cold. Some of the primates come from zoos or research laboratories. Others began life as pets.

“People get them when they are cute little babies,” Almrud says. “When they are 3- to 5-year-olds, they start to challenge the family. That’s when the sanctuary is called.”

Woodward says it’s harmful for monkeys to live with humans because the animals associate with people and don’t realize they’re primates. “Those raised by humans suffer more psychological damage than those coming out of research.”

She points to Jackie, a capuchin clutching a teddy bear, nervously pacing around her enclosure. Jackie lived in a birdcage in a Louisiana home for 20 years before arriving at Black Beauty Ranch two weeks earlier. Now, she must adjust to living with other capuchins. 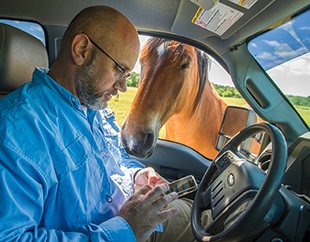 A horse noses in on a ranch volunteer.

As the tour bus pulls up to the chimpanzee compound, a massive, broad-shouldered chimp strides across the walkway leading to a large enclosure. It’s Midge, age 42, who, along with his bunkmate Lulu, was retired from biomedical research in 1997.

At the far end of the sanctuary, a 5-acre wooded lot is home to four tigers, including one named Alex. During the tour, a TV monitor on the bus screens a presentation about Alex. Rescuers found him abandoned in a tiny cage in the backyard of a Kansas drug-dealer. Alex comes out to greet the van, loping along beside it.

Each big cat has a yard and den. Because the tigers are predators, staff members follow strict safety protocols. The cats’ diet consists of chicken, red meat, the occasional rabbit, and commercial food comprised of cow organs, bones, and beef. The caretakers carefully slip the metal meal trays under narrow slots on the floor. A closed-circuit video system continuously monitors the big cats’ whereabouts.

After leaving the tigers, the van bounces along a dirt road, passing through several automatic gates until arriving at an open pasture and a breathtaking sight: hundreds of horses and burros roaming free across 800 acres. Kim Sella, who leads the equine team, greets the visitors. “All the horses at Black Beauty have one thing in common—they were abused, thrown away, or headed to slaughter,” she says.

It’s feeding time, and the burros and horses are gathered in groups, peacefully munching hay. “It’s like the lunchroom in high school. They all separate into cliques,” laughs Sella, who knows the name of every horse.

The horses know Sella, too. She patrols the pastures twice daily to check for injuries and illnesses. “We want the herd to be as wild as possible, but healthy,” she explains.

Black Beauty Ranch has continued to grow since Amory’s death. The Fund for Animals built a surgical hospital onsite in 2012 and plans to build a larger primate facility. Caring for hundreds of animals, mending fences, and baling hay is tough work, but the ranch’s 22 staff members say they’re proud to remain true to Amory’s vision of “what life could be like for animals instead of what it all too often is.”