Written by Art Williams, Photographs by Julia Robinson | From the May 2016 issue | Updated: November 8, 2018 | Filed Under: TRAVEL 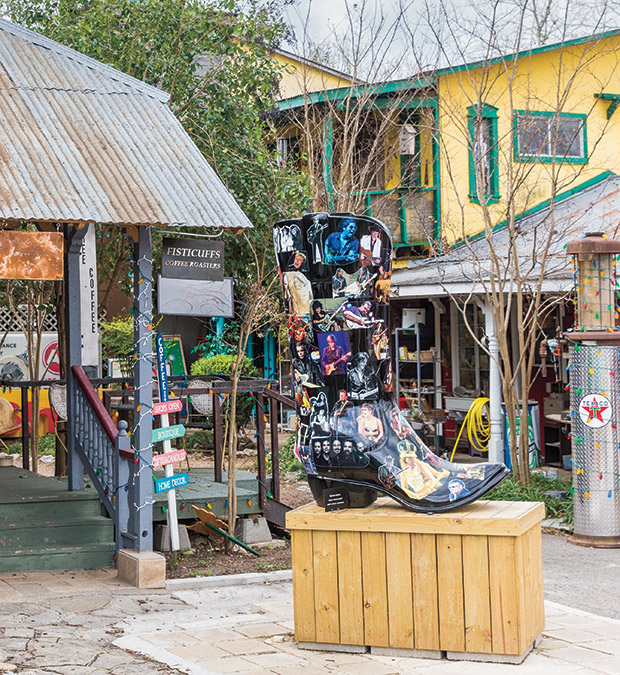 Here in Wimberley, a town of less than 3,000 in the heart of the Hill Country, visitors and residents alike describe the scene as “bootiful.”

The fiberglass boot sculptures, which were installed in 2014 and 2015, are just one attraction for this community some 45 minutes southwest of Austin. Wimberley blends small-town rodeos, Friday night football, water recreation, and a popular monthly outdoor market with stylish bed and breakfasts, high-end art, Texas fine dining, and a gourmet kitchen store.

For details about lodging, dining, events, art galleries, and attractions, including Blue Hole, Jacob’s Well, and Old Baldy, contact the Wimberley Valley Chamber of Commerce and Visitors Bureau at 512/847-2201. (For details about the Blanco sites in this story, see www.blancochamber.com.)

Find information about the “Bootiful” project, including interactive maps, boot images, and details about artists at www.bootifulwimberley.com.

The “Bootiful” project was spearheaded by artist Lynn Myers and Wimberley art gallery owner Rob Pitzer, whose Pitzer’s Fine Arts opened here in 2006. Thanks to a dedicated committee of local artists and community leaders, 50 renditions of boots created by area artists now occupy Wimberley’s business district and beyond—each six feet tall but a universe apart in color, design, and message. Maps are available at galleries, stores, and online so visitors can find the boots in a scavenger hunt.

For a town ravaged twice by floods in 2015, the mood in Wimberley is upbeat, and longtime visitors appreciate that the best of “old” Wimberley is intact. The cypress-lined Blue Hole, one of Texas’ most inviting spring-fed swimming destinations, is on target to open for swimming in May (weekends only until Memorial Day). Old Baldy, a popular summit for climbing and exploring, draws outdoorsy types eager to work up a sweat for a view. Throughout the town’s center, shops and cafés are thriving. Beyond the boots and the town’s emerging art colony, you’ll find restaurants, shops, and even a zipline operation to give you a bird’s-eye view of all the surrounding beauty. 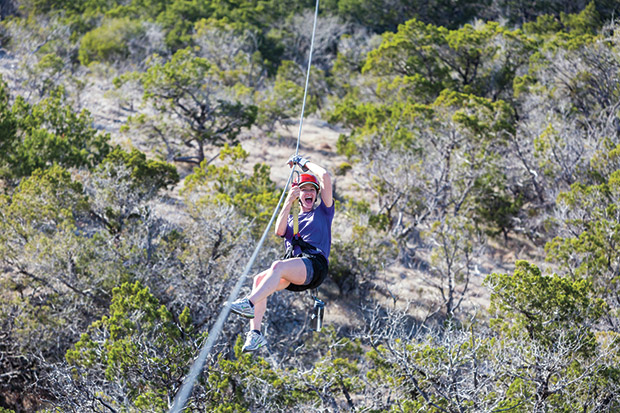 “We received a little bit of damage, but it was nothing we couldn’t fix,” says Amanda McAlpin, a multi-tasker at Wimberley Zipline Adventures, who tells me that the guides keep guests “entertained while we inform them about the hillsides, our ranch, and the environment.” The course includes 10 separate ziplines; together, they stretch for about a mile over the cypress-studded, hilly expanse known to most locals as the Wimberley Valley.

Yet perhaps no activity in Wimberley speaks to the easygoing nature of the town as well as a swim in the spring-fed waters of Cypress Creek at Blue Hole, the centerpiece of a 126-acre community park. A manicured lawn amid the towering bald cypresses creates a tranquil spot for sunbathing, reading, or games. Ropes from the trees invite swimmers to swing out and drop into the cool and clear creek—with water temperatures in the 70s year-round.

North of town, Jacob’s Well, another spring-fed swimming hole, is an alternative to a dip in Blue Hole. The artesian springs that form the limestone-surrounded “well” create the headwaters of Cypress Creek, which wends through downtown Wimberley. A swim here, or a quick wade in Cypress Creek, are ideal ways to cool off when the temperatures climb.

Day trips like the 30-mile drive to Blanco underscore the calmness and rugged beauty of this part of the Hill Country. First, check off Wimberley’s Old Baldy from your list by making an early-morning ascent up its 218 stone steps to the tabletop summit for a 360-degree view of the surrounding hillsides and treetops. From there, find your way to FM 2325 and eventually FM 165 for grand vistas of the Hill Country at eye level, including photo-worthy glimpses of low-lying pastures, escarpments, occasional wildlife, and the Blanco River. Go for a brief spin through Blanco State Park, a 104-acre sliver of serenity near downtown Blanco, and stop for lunch on or near the town square. You might choose Redbud Café for its well-made sandwiches and draft beer from Blanco’s Real Ale Brewing Company, or make your way one block toward the river for a burger at the café for the Blanco Bowling Club, which dates to 1948 and still runs a German-style nine-pin bowling alley. 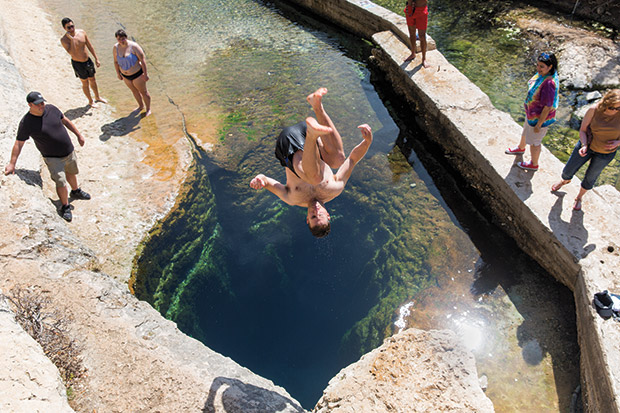 Your counterclockwise return to Wimberley via FM 32 follows ridgelines of the aptly named Devil’s Backbone for views of the valley from its southern rim. Not far from one shaded overlook is the Devil’s Backbone Tavern, which opened in 1932. Beer is cheap and cold, and pickup trucks outnumber sedans in the gravel parking lot. A handwritten message on a white board behind the bar says, “If you ain’t here, please sign in. Tell the bartender.” An old-fashioned shuffleboard table completes the picture.

Lodging around Wimberley includes campgrounds, cottages, cabins, and B&Bs. On our two most recent visits, my wife and I chose the Blair House Inn and Creekhaven Inn for their comfort, accessibility, and scenery.

The Blair House’s current owners, Chris and Lois Mahoney, honor the legacy of original owner Jonnie Stansbury, a California transplant who brought acclaim for her B&B with extravagant, wine-paired Saturday-night dinners. The next owners, veteran hospitality managers Mike and Vickie Schneider, added spacious cottages to increase accommodations to 12, a swimming pool, and an expanded schedule of cooking classes. The inn’s 86 acres are dotted with live oaks and stands of prickly pear and native grasses. As a fog lifted during our visit, we took in the Hill Country tranquility from the deck of our cottage, a moment made even more noteworthy when the Mahoneys’ 11-year-old tabby cat Oliver arrived to keep us company.

The common areas of the Blair House’s main lodge are ringed with art for sale, including originals by local painters and digital prints by Los Angeles-based painter Todd White, a native of San Antonio known for his animation work in the television cartoon “SpongeBob SquarePants.” Cooking classes here are a big draw, and Saturday night’s menu often features an entrée presented by students. During the week, you’ll want to head off-property to dine, but save room for dessert: The Mahoneys often make sure that a carafe of red wine and a few slices of pie in your room await your return.

Closer to town, Creekhaven Inn’s shaded location beside Cypress Creek was almost its undoing in October 2015, when the creek’s raging waters engulfed the main house’s first floor and tore away the main deck, carrying it 150 feet before it smashed into a tree. A concerted effort by owners Bill and Pat Appleman and scores of community volunteers resulted in Creekhaven’s reopening three months later. These days, 14 rooms (six in the main house and another eight in a second building alongside) offer peaceful views of Cypress Creek via hammock or shaded porch, along with complimentary kayaks, birdwatching opportunities, and the option to simply let the gurgle of the creek lull you into relaxation. “What I most often hear from visitors is that it’s so peaceful here, with the trees and the sounds of the creek,” says Pat. “There are so many places to sit and enjoy nature.” Mornings bring a full breakfast—an egg casserole, plus a meat and plenty of fruit—served buffet-style in the main house. “We are so glad to be innkeepers again rather than project managers,” says Pat with a laugh.

As a rule, Wimberley’s dining options are varied—comfort food at Cypress Creek Cafe or Wimberley Cafe, Tex-Mex at Milagro, al fresco overlooking Cypress Creek at Ino’z Brew and Chew, or pizza at Marco’s, among others. My current favorite is Linda’s Fine Foods; on my last visit I skipped the main course and went for Indian-style black-eyed pea salad, a trio of tart deviled eggs, and sautéed sweet potatoes and kale. The restaurant’s kitchen and dining room occupy a former stone house, and outdoor seating is available in the evening beneath spreading oak trees. Musicians perform several days each week, and the menu changes frequently, reflecting chef and owner Linda Allen’s eclectic tastes.

From March through December, Wimberley’s Market Days event brings shoppers to town on the first Saturday of each month, when more than 475 booths set up within walking distance of Cypress Creek. But there is plenty of shopping to be had year-round, too. We like Kiss the Cook, which rivals larger metropolitan stores with its selection of creative kitchenware and level of personal service. In other shops, local merchants offer art, jewelry, clothing, furniture, and collectibles. 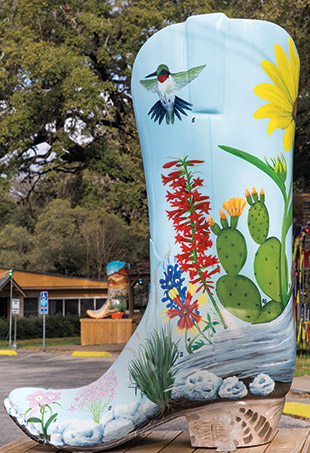 The colorful boots of the “Bootiful” project now unite Wimberley’s stores, galleries, restaurants, lodgings, and public institutions. The sparkling Turn the Boot Around by artist Rhett Ryan radiates reflected light at Gallery on the Square. Some depict nature scenes, such as Doug Hiser’s Hill Country Birds at the Wimberley Visitors Center. Layers by Chrys Grummert, at the Leaning Pear restaurant, is an abstraction of wavy rings in hues of red, blue, and yellow. And if you go by the Hill Country Cowboy Church, you’ll spy Boot Scootin’ Believer by Jean Schuler, which features a silhouette of a cowboy on a bucking horse with a fading orange background.

The concept of boots sprang from Rob Pitzer’s and Lynn Meyers’ desire to encourage collaboration among area artists. After discussing many ideas, Pitzer says, “I suggested we have a public art project.” Like similar projects elsewhere that have featured cows or guitars, local merchants and institutions sponsored a boot and were paired with an artist, who produced the designs.

Some artists who didn’t have studios large enough to accommodate the six-foot boot frames labored in a former church building nicknamed the “Boot Hole.” Once the fiberglass boots were painted or decorated, they were clear-coated at an auto-body shop and installed on secure platforms at their new owner’s venue. The project was coordinated by a nonprofit known as the Wimberley Valley Arts and Cultural Alliance, which facilitated Wimberley’s designation by the Texas Commission on the Arts as a “cultural arts district.” This made Wimberley eligible for TCA grants like the one that helped remodel the 117-seat Wimberley Playhouse. The theater hosts performances of the Wimberley Players, a volunteer troupe that came together in 1979.

Among Wimberley’s 15 galleries is Art on 12, which represents 53 artists, including painter Julie Underriner, who uses brushes sparingly and instead pours paint on canvases and panels, creating works that are sometimes startling and always evocative.

Next door to Art on 12 is Pitzer’s Fine Arts, whose patio could be a museum attraction. The gallery’s highest priced piece is there—a $90,000 life-size sculpture of Thomas Jefferson writing the first draft of the Declaration of Independence. It faithfully depicts details such as Jefferson’s handwriting and the writing box he invented.

At Pitzer’s entrance is its boot art, The Yellow Rose of Wimberley by Denice Calley. A bursting yellow rose on the boot’s left side is complemented by a collage of stars, a powder-blue toe, blue straps, and the words “A Little Bit of Heaven,” one of Wimberley’s many mottos. It was the first “Bootiful” boot commissioned. “Residents and visitors ahve really embraced this project,” says Pitzer. “It has created one more thing for people to experience when they come to Wimberley.”