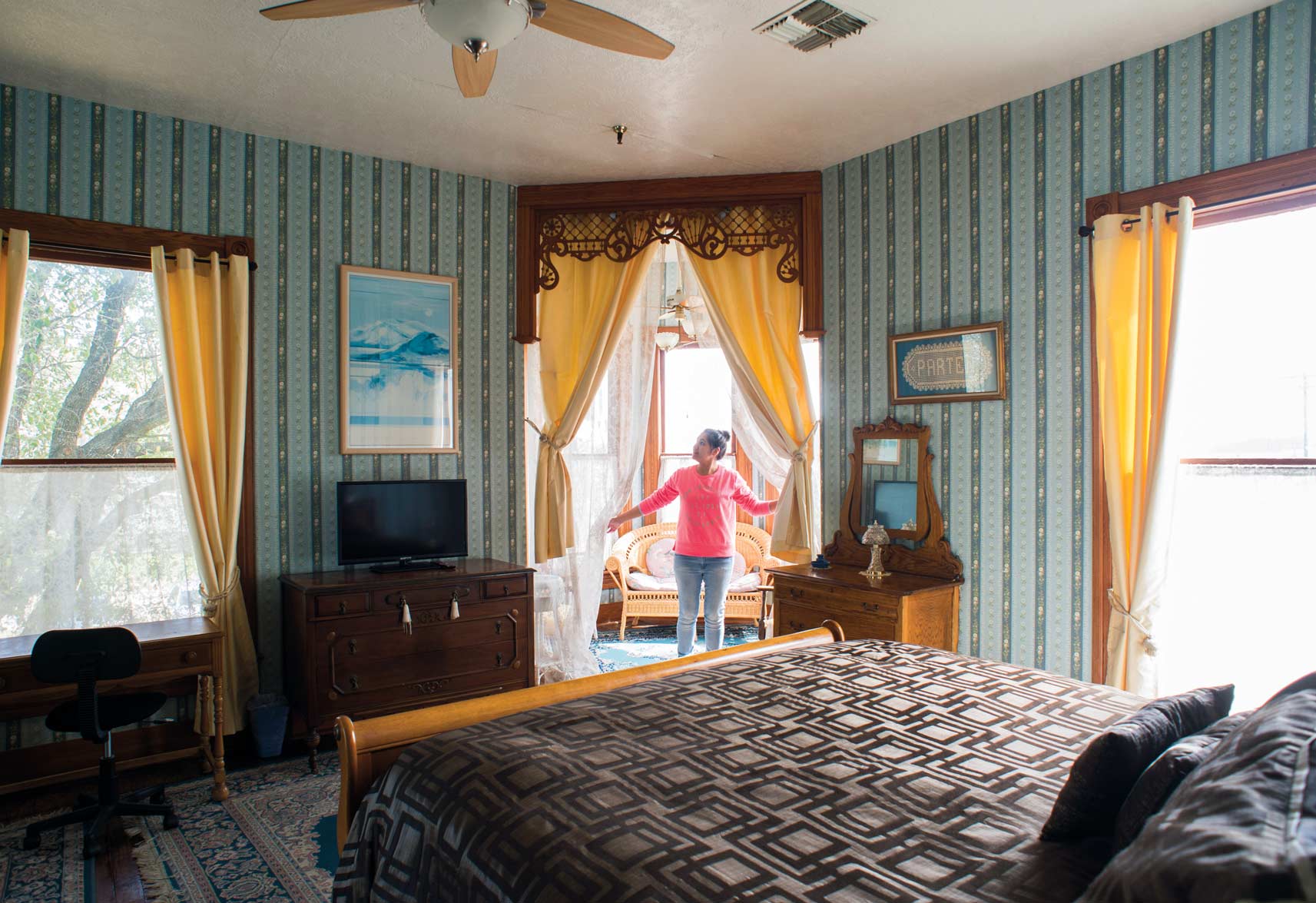 Constructed as a pair of kit houses in 1904, the Woodbine Hotel offers understated luxury and a glimpse of Texas from a bygone era. Photo: Kevin Stillman

Approaching Madisonville’s courthouse square, I’m not surprised that traffic ebbs to a crawl. After all, this East Texas town, population 4,636, loves to throw a party.

Kicking off with the Madison County Rodeo in March, followed by the Tour de Madison Bike Ride Festival in April, and the nearly month-long Sidewalk Cattlemen’s Celebration in May, Madisonville caps off its large galas with the Texas Mushroom Festival in October—with plenty of smaller events filling in the gaps.

My husband, Shannon, and I haven’t come for the festivities, however, but for a brief respite from life’s usual hectic pace. Our destination is Madisonville’s Woodbine Hotel, and because well-behaved dogs (and cats) are welcome, our border collie Chloe accompanies us. Our plan is to relax, recharge, and experience the hotel’s gracious ambiance and sumptuous Sunday buffet—the talk of townsfolk and travelers alike.

From the expansive veranda, we step through the front door into an open parlor that transports us to an era of refined elegance.

From the expansive veranda, we step through the front door into an open parlor that transports us to an era of refined elegance. Flanking the parlor to the left, mismatched vintage chairs and tables covered in white linens await diners. To the right, a tall transom-topped door leads to the hotel bar, which showcases an antique cash register and a 1904 telephone booth—the first one in Madisonville. (The second didn’t arrive until 1929.) Directly ahead, two ornately carved curly-pine newel posts create the base of the staircase, which ascends to the second floor.  Authentic period wallpapers complete the Victorian ambiance. 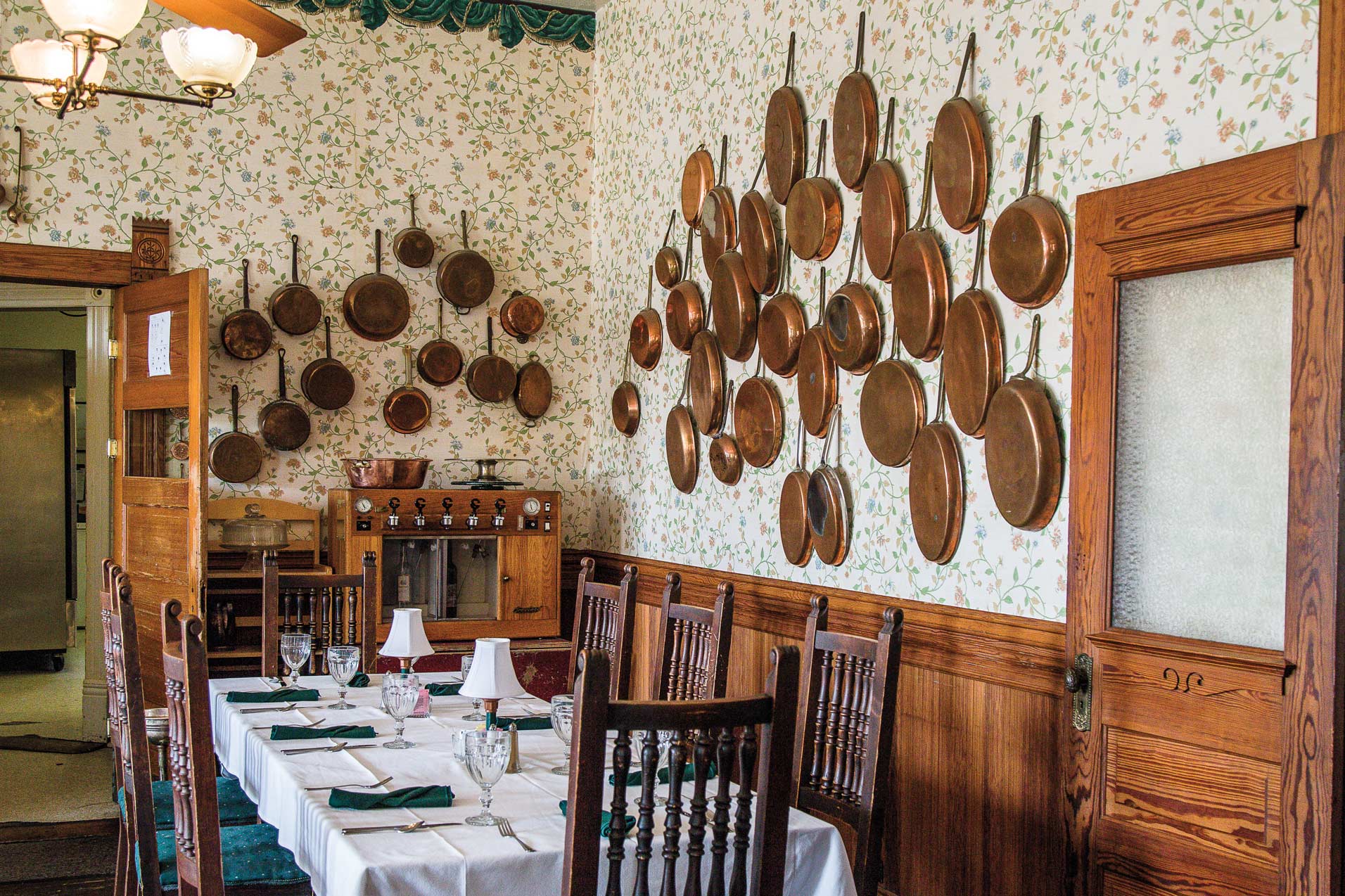 A restoration in 1979, complete with Victorian woodwork, earned the hotel a spot in the National Register of Historic Places. Photo: Susan L. Ebert

Owner Susan Warmuth peers over her glasses from the hotel desk beneath the staircase to beam a warm welcome, and before checking into our room, we linger to visit. Originally from Pennsylvania, Warmuth earned a degree in hotel management from Penn State, then embarked on a culinary career that would take her from coast to coast.

“My dream was to run my own hotel,” she says. “I found this one for sale on the internet nearly 20 years ago and fell in love with it.” She reaches into a cabinet behind her desk and retrieves a well-thumbed binder stuffed with photographs of the property through the decades.

We learn that Jake and Sarah Shapira, Jewish Russian immigrants who settled in Madisonville in the 1870s, ran a boarding house here that burned in 1903. When they decided to rebuild, they purchased two kit houses at the 1904 St. Louis World’s Fair. The first, a turreted Queen Anne Victorian, now houses the dining room; the second, an Eastlake-style structure, holds the bar. The Shapiras joined the two kit houses with upstairs and downstairs parlors, adding rooms on both floors and verandas on both the front and the back. The kit houses came with plans and all of the necessary hardware, and the Shapiras had the lumber—primarily East Texas longleaf pine—milled in nearby Huntsville. Nearly 200 bluebonnet motifs hand-carved into the plinths above the doors and windows contributed Texas charm.

The hotel earned recognition in the National Register of Historic Places in 1980 and became a Texas Historic Landmark in 1982.

Over the years, the hotel changed hands and names several times but fell into disrepair by the mid-1970s.  In 1979, local philanthropists Randy and Lynn Parten bought the hotel and undertook a thoughtful restoration, earning the hotel recognition in the National Register of Historic Places in 1980 and Texas Historic Landmark status in 1982. The Partens donated the property to the Woodbine Foundation in 1997, and Warmuth bought it two years later, keeping the Woodbine Hotel name.

At the top of the stairs in the Parten Suite, I settle into a cushioned wicker loveseat in a sunlit Queen Anne turret, book in hand, then luxuriate in the whirlpool tub before diving into the king sleigh bed’s luxurious linens for a brief siesta. After watching the sunset from the upper back veranda, my husband and I amble around the downtown square, browse the shop windows, and enjoy a light meal in anticipation of the main event: tomorrow morning’s buffet. 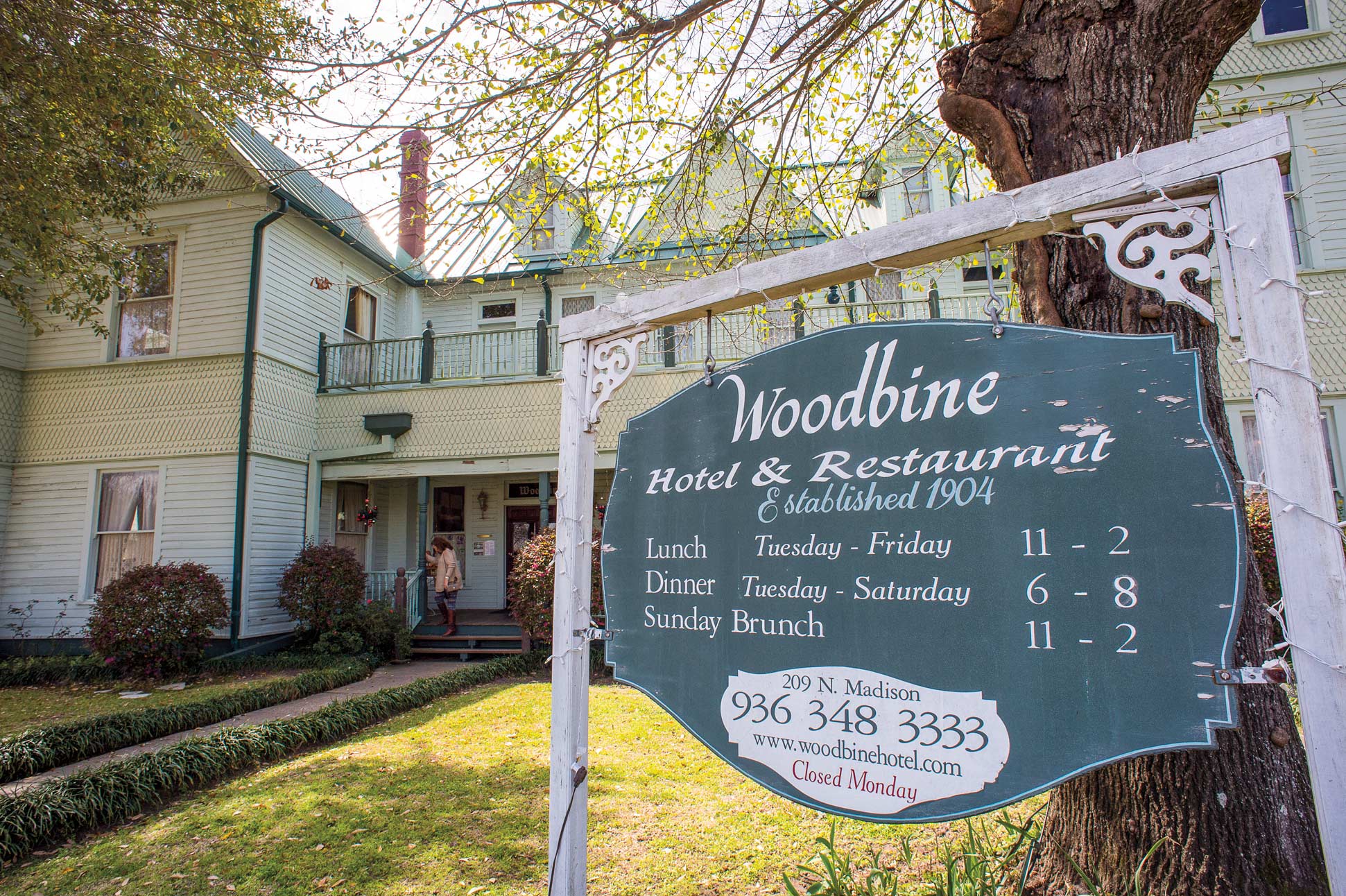 Early Sunday morning after a stroll around the grounds, I peer into the kitchen to watch Warmuth put the finishing touches on desserts while longtime Chef Leon de la Garcia grills chicken. I pour two cups of coffee, grab a copy of the Madisonville Meteor—which was founded in 1894—and head up the grand staircase to share coffee and the paper with Shannon on the veranda. When we descend the staircase for Sunday brunch, the downstairs parlor has been transformed. Small groupings of tables and chairs have been moved out, and long tables covered in white linens extend from the front door across the length of the parlor. On the farthest table, pie slices galore—lemon meringue, coconut meringue, Key lime, chocolate, fruit, and chess among them—have been placed on pretty plates. Closest to the front door, a large green salad in a chilled silver serving dish and an artfully arranged fruit platter herald the start of the buffet line.

When we descend the staircase for Sunday brunch, the downstairs parlor has been transformed. My husband whispers to me, “A man could hurt himself here.”

Warmuth greets us with her signature cheery smile as she and her staff carry out steaming chafing dishes to place between the salads and desserts. Today, there’s prime rib, fried catfish and clams, beef medallions, fried chicken, and chicken-fried steak. Still more chafing dishes come out with grilled pork chops in a ginger cream sauce, grilled chicken, mashed potatoes, hot rolls, and butter.

Shannon takes it in, eyes widening, and whispers to me, “A man could hurt himself here.”

Indeed; a gal could, too. And while the Woodbine Hotel opens to the public for lunch Tuesday through Friday and supper Tuesday through Saturday, Sunday brunch is its big draw. Warmuth keeps its pricing modest: $15, which includes tax—a paltry sum for such a princely feast. We note farmers, townsfolk, travelers, and the after-church crowd drifting through in waves as we graze our way through the ample offerings.

But there’s always room for pie, isn’t there? A slice of lemon meringue pie—airy and sweet-tart, with a bonus middle layer of lemon mousse—provides a luscious coda, both to the meal and to the weekend.