Chisholm Trail buffs frequently clash over the trail’s history, beginning with a basic question of whether it ever really was in Texas. The hubbub peaked in 2001, when reaction to a Texas Historical Commission brochure attracted the attention of a New York Times reporter.

In an article, Fort Worth historian Doug Harman, citing a half-dozen sources, said “The Texas men who went on the cattle drives all called it the Chisholm Trail,” while Pat Halpin, president of the Old Trail Drivers Association of Texas at the time, claimed “it never entered Texas at all.” 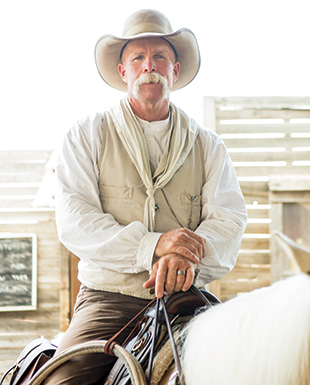 Whatever it’s called in Texas, it is certain that the Chisholm Trail was the main means for Texan cowboys leading cattle to Kansan train depots in the late 1860s and 1870s. And it’s sure that there was no single trail to take—particularly in Texas.

“Trails originated wherever a herd was shaped up and ended wherever a market was found,” TC Richardson wrote in Cattle Trails of Texas in 1937. That means Texas’ contribution to the “Chisholm Trail” looked more like tree roots than a lone trunk.

“We are trying to side step, but not ignore, any of the academic controversies and use the anniversary to celebrate the impact of the cattle trails, using Chisholm as the vehicle,” says Bradford Patterson, community heritage development director at the Texas Historical Commission. “The Chisholm arguably has had the most influence of any single trail, and it is the most recognizable to the public due to influence of popular culture.”

Debate also hovers over the question of who “Chisholm” was. The trail is generally believed to be named for Jesse Chisholm, a helpful trailblazer living in Indian Territory, a Scottish/Cherokee Tennessean who died before knowing his name would go down in history. (A Lenape trapper named Black Beaver introduced the trail to him.) Others claim a drover from Cuero named Thornton should get the credit, while some figure it was New Mexico rancher John Chisum.

And who led all these Longhorns? A mix of (mostly) men took off with cattle herds—Confederate vets, yes, but also Mexican vaqueros, Native Americans, and African Americans. Women, too: The Texas Historical Commission’s excellent new “time travel” app on the Chisholm Trail tells stories of historical figures such as Amanda Burks, the “Queen of the Old Trail Drivers,” who led a herd on the trail in 1871 before spending a half-century ranching in Texas.

For more on the Chisholm Trail, visit texastravelapp.com.