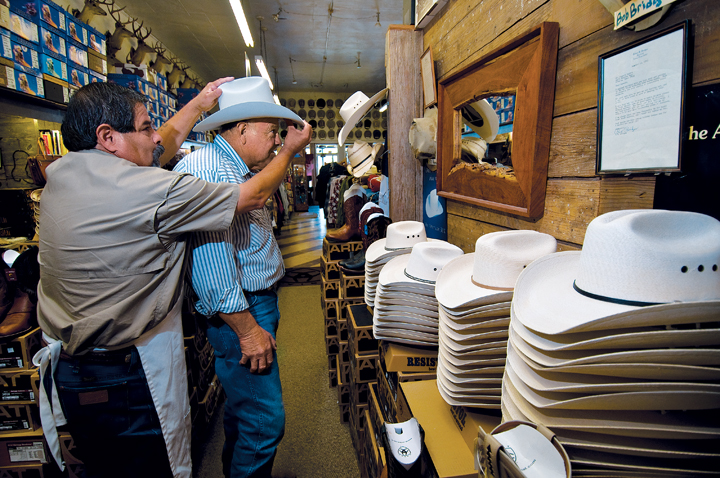 “When I was born, I didn’t cry,” swears cowboy-hat stylist Don Livingston of Longhorn Hatters
in Schertz. “Instead, I yelled ‘STETSON!’ at the top of my lungs.”

Disbelieve that yarn if you must, but vast numbers of Texans past and present would join Don at shooting holes in the old saying that a Western wannabe is “All hat and no cattle.” When it comes to goin’ cowboy—whether fauxpoke or genuine article—much of the mystique is all about the hat.

“Tracing the evolution of the cowboy hat,” observed folklorist Martha Hartzog and hatter Manny Gammage in the 1985 book Folk Art in Texas, “from the early 1800s until today is like following a twisting coyote trail.” Spanish and Mexican vaqueros wore versions of the wide-brimmed hat as they spread cattle culture northward into Texas and across the Southwest. Westering settlers adopted the protective headwear, too, and in 1865, Philadelphia hatmaker John Batterson Stetson introduced his “Boss of the Plains” chapeau. By the cattle-drive heydays of the 1870s, Montgomery Wards catalogs offered the “Texan Chief Cow Boy’s Mexican Style Sombrero Hat” for $5.34.

In the 20th Century, Western film stars established the cowboy hat as an American cultural icon, and country-western singers especially appreciated its timeless appeal. When one of Ernest Tubb’s Texas Troubadours asked if he could perform bareheaded, Tubb offered to let him off the bus. George Strait continued the tradition when he first went to Nashville in the early 1980s, though record executives tried in vain to get the popular singer to “lose the hat.”

President Lyndon Johnson ordered hundreds of Resistol “San Antone” or “Open Road” hats as “friendship gifts” for visitors to his ranch in the 1960s. When he presented West German Chancellor Ludwig Erhard and his traveling party with 50 hats, Life magazine proclaimed that the Johnson presidency had stampeded the nation into “The 10-Gallon Era.”

The Resistol and Stetson felt and straw cowboy hats sold in Western-wear stores today are manufactured in Garland, where the Resistol/Stetson company operates an outlet store. And custom hatters throughout the state can make you a hat like one that catches your fancy in a movie, book,
or magazine. Or even in your imagination.

As a living folk tradition, hatmaking is often passed down through generations. Don Livingston, for example, learned from a female hatter named Tex Gregory, who ran Lone Star Hatters in Austin. And Joe Peters of Peters Bros. Hats in Fort Worth studied chapeau mojo with his grandfather Tom Peters, who started the business with his brother Jim in 1911.

To celebrate Peters Bros.’ centennial in 2011, Peters plans to make 100 hats of 100% beaver and discount them $100. They might be fedoras or the special “Shady Oak” style that Grandpa Peters used to make for Fort Worth civic booster Amon Carter, who presented “Shady Oaks” to important Cowtown visitors. The style has stood the test of time: Austin filmmaker Robert Rodriguez and other winners at last year’s Lone Star International Film Festival, held in Fort Worth, received “Shady Oak” hats instead of trophies.

Before he became the head hatmaker in the mid-1990s at the 100-year-old Standard Hat Works in Waco, Lenny Lawson absorbed hat know-how by visiting hatters across the country and hanging out at the shop in Waco. “Rodeo cowboys like to come in here to drink coffee and shoot the breeze,” says Lawson. “After an injury ended my bull-riding days, I just started helping folks with hats, and when I was selling as many as the people who worked here, they hired me.”

Many Texas hatters will restore your old hat after it gets stomped by a bull or worn by time. Shudde Bros. Hatters of Brookshire even rejuvenated Sam Houston’s hat back in 1936, as part of the state’s centennial. And some hatters will carefully “distress” a hat that looks too new. “We had one customer
whose fiancée bought him a new hat for their wedding,” says Chuck Wilkerson of Mike’s Custom Hatters in Longview. “He brought it back and asked us to ‘fix it.’ So, we worked it over with bourbon, coffee, sand, and tea, and something I’ll call ‘unmentionables from the pasture.’ Far as I know, they’re still hitched.”

On the Web site for Ben’s Western Wear in Cotulla, the store’s late owner Stewart Martin wrote that many a South Texas brush country cowboy heard these discouraging words from a spouse: “You’re not coming back into this house with that dirty, stinking, old hat!” For wranglers reluctant to part with their soulful sombreros, Martin created the store’s Texas Hat Museum. When a cowboy bought a new hat at the store, he left the old one, which went up on the wall. Today, more than 400 sweat-and-soil-stained hats grace the antique Cotulla bricks at Ben’s, in a building that used to be an Old West saloon. “My husband loved the stories behind these hats,” says Martin’s widow, Jill. “The hats represented the friendships he had with his customers.”

“Each hat has a personality like the man it once adorned,” observed cowboy poet Don Cadden of the museum in Ben’s. “Shaped by time and weather creased by wind, and brush, and thorn.”

No one understands that sentiment better than Nat Fleming, who maintained the same tradition at The Cow Lot Western Wear Store in Wichita Falls, which opened in 1952. By 2007, when The Cow Lot closed, 511 “Nat’s Hats” had assumed a place of honor on the walls and in the rafters. Fleming donated his collection to the city’s Museum of North Texas History, which will soon display them in a renovated wing of the building. “For now, we’re
showing 11 of Nat’s hats as a teaser,” says Museum Director Lita Watson.

“Those hats tell the story of my life and of this whole part of the country,” says Fleming. Former rodeo clown J.R. Gahagan, who creased and shaped hats at The Cow Lot for 38 years, agrees. “The hat takes on the personality of the individual,” notes Gahagan. “And after you look at the hat for a while, it even looks like ’em.”

In Bandera, the Frontier Times Museum also recognizes the value of historic headgear, showcasing a collection of 45 seasoned Western hats gathered by Ohio hat historian Debbie Henderson. “About half of the hats were found on trips through Texas,” says Henderson. “There’s an LBJ hat, a 1936 Texas Centennial hat, and a Lone Ranger hat signed by the actor John Hart.” Museum Curator Rebecca Norton adds that the permanent exhibit also includes
“several beautiful sombreros and an iconic child’s Roy Rogers hat.”

Remembering Roy and other childhood heroes, Longhorn Hatters’ Don Livingston opines, “Most everybody has a burning desire to be a cowboy for a little while.”

“And without the hat,” adds Henderson, “there is no cowboy!”