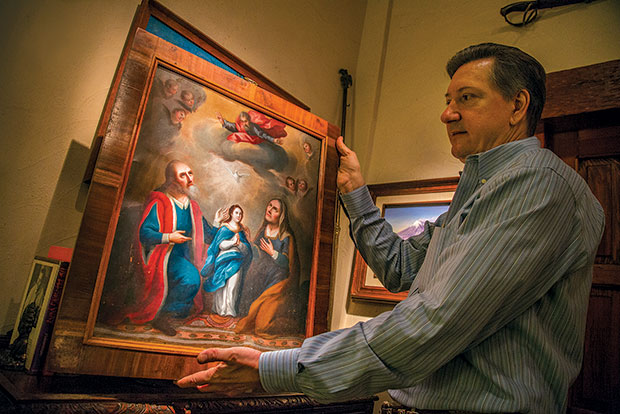 Most Texans with deep roots in the state treasure the contributions their ancestors made to its unique history. But there may not be a clan with a keener appreciation of its role in this immense and storied land than the Guerra family of far South Texas.

The first members of the Guerra family to step foot in the New World arrived from Spain in the early 1600s, landing in the Mexican port of Vera Cruz, which was then part of Nueva España. Several generations later, having established themselves in the colonial government, the Guerras acquired a land grant in the Rio Grande Valley. Here they colonized territories that would become part of Mexico and the United States, building communities and fostering a proud Texas legacy.

As caretakers of this 400-year-old legacy, the Guerras safeguard the history and culture of South Texas and share it with the world through a range of activities, including ranching, the arts, and the preservation of historical treasures. Enrique Guerra, the 85-year-old family patriarch, lives with his wife, Lydia, on San Vicente Ranch, part of the ancestral land grant near the Hidalgo County hamlet of Linn. Their forefathers arrived in the Rio Grande Valley in the mid-1700s, Guerra says, when José de Escandón established Nueva España’s province of Nuevo Santander. “You have the famous saying of six flags in Texas,” Guerra marvels. “We lived under all six flags.” 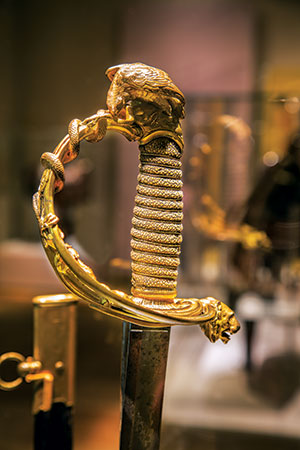 An astute collector of Spanish Colonial, Mexican, and Southwestern art and antiques, Guerra shares selections from his collection in the Enrique and Lydia Guerra and Family Gallery at the Briscoe Western Art Museum in San Antonio. Enrique and Lydia’s sons, Che and Kiko, extend the family’s preservation of borderland culture elsewhere in South Texas. Che Guerra owns the Nuevo Santander Gallery and The Patio on Guerra restaurant in McAllen, while Enrique “Kiko” Guerra creates historically inspired paintings and sculpture in his San Vicente Ranch studio.

Steven M. Karr, former executive director of the Briscoe Western Art Museum, says the Guerras have amassed one of America’s “great private collections” through generations of collecting art and artifacts on both sides of the border. “The family’s collecting passion helps to tell the story of the region’s shared history and traditions—Spanish, Mexican, the Republic, statehood,” Karr says. “It embodies the often-changing political and social circumstances that continue to define the region today.”

The Guerras track their more recent family history to Roma in Starr County, where ancestor Manuel Guerra settled in 1877. His two-story residence and store sits within the border town’s National Historic Landmark district. Built by Heinrich Portscheller in 1884, the distinctive brick structure with its original wrought-iron balcony joins 37 other historic Roma sites to make up what the National Park Service deems “the only American Spanish colonial settlement that preserves the character of Escandón’s town planning.”

In 1908, while Enrique Guerra’s grandfather Diodoro was Starr County sheriff, Enrique’s father (also named Enrique) and his two brothers drove a herd of mules north to San Antonio, sold them, then headed for the brand-new town of McAllen. There, the brothers opened a store with the mule profits, managed land-clearing contracts, and sold the wood from uprooted mesquite trees for use as fuel in steamboats plying the Rio Grande. In 1912, their parents joined them, and a sign reading “D. Guerra and Sons 1912” went up on a brick building that still stands on 17th Street—also known as Guerra Street—in downtown McAllen. In 2008, Che Guerra, along with his cousin Arturo, restored an old saloon that Che’s grandfather had opened in the historic building, expanded the structure in the same border-brick style, and opened The Patio on Guerra.

Che Guerra had caught preservation fever in the early 1980s, when he helped San Antonio businessman Larry Sheerin restore the LaBorde House in Rio Grande City and then managed the hotel for several years. He also opened an adjacent restaurant, Che’s, that still bears his name (though today is under different ownership). 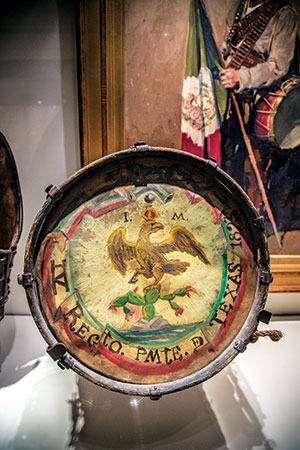 Collecting regional art and historic artifacts is a Guerra family devotion going back several generations, and Che got involved as a boy. With his wife, Becky, he decided to turn his passions for art and history into a business, opening McAllen’s Nuevo Santander Gallery in 1998. The gallery’s stone construction, bell tower, and stained-glass windows are reminiscent of a Spanish colonial mission. Antique wrought iron and 150-year-old wooden doors and windows from Mexico add to the effect. Local mesquite was used in interior floors, along with Talavera and Saltillo tile.

“We used regional caliche caprock stone for the exterior and the columns inside,” says Che. “It’s very hard, almost like marble. The three bells are for our three kids, and the blue line through the stained glass windows represents the Rio Grande. The middle window displays José Escandón’s coat of arms.”

Nuevo Santander Gallery’s offerings are just as distinctive as its structure. Spanish Colonial, Mexican, and Old West antiques and artifacts share space with artworks that depict the lives and landscapes of the borderlands and beyond. Visitors can see Spanish Colonial religious paintings on copper, called retablos, which date to the 1650s. A large display case holds vintage frontier firearms, along with vintage spurs and ex-votos, which are votive offerings to saints in the form of narrative artworks. A 1912 silk, silver, and gold processional banner from Mexico bears the embroidered image of Señora de los Remedios.

A large untitled oil painting by Kiko Guerra presents an intriguing vision of San Antonio’s Mission Concepción, with guitarristas gathered around a campfire. Works by the Mexican artist Agapito Labios (1898-1996), who is best known for his paintings of children, testify to the enduring, transformative power of art. Jailed during the Mexican Revolution, Labios painted the walls of his prison cell. When local authorities saw his artistry, they commissioned Labios to paint more.

Kiko Guerra is an accomplished cabrito cook. Taste kid goat barbecued by Kiko and other South Texas pit-masters on Nov. 1 at the Linn-San Manuel cookoff at La Muneca Ranch.

Sculpture in the gallery includes a small bronze model of Jason Scull’s Hijos del Sol, which depicts 16th-Century Texas sojourner Cabeza de Vaca removing an arrow from a Native American’s heart in a semi-miraculous medical procedure. A burgeoning McAllen arts district has grown around Nuevo Santander, as other galleries have been established nearby. The McAllen Chamber of Commerce named Becky Guerra its “Woman of the Year” in 2012 for initiating a popular First Friday Art Walk.

Aspects of the Guerras’ gallery stretch about eight blocks south to their restaurant, The Patio on Guerra, where the art hanging on the vintage brick walls is also for sale. A lively yet refined crowd enjoys an extensive menu of entrées from range, wing, and sea, with both indoor and outdoor seating. Famed for its Akita Bloody Mary and other cocktails, The Patio also hosts musical performers to complement the spirited ambiance. A selection of ancestral Guerra images hangs near the bar, along with a giclee print of a Kiko Guerra painting of vaqueros driving cattle past the Manuel Guerra store in Roma.

Back at the San Vicente Ranch, Kiko Guerra creates artwork that’s often inspired by regional ranching history, such as a recent bronze sculpture of a Tejano drover training two steers how to travel in a cattle drive. “This is a scene from the early 1800s,” he explains, shaping a small clay version. “They would rope wild cattle, then tie their heads together and braid their tails together to teach them how to go up the trail.” A stickler for historical accuracy, the artist points out that these steers would have been bonier than their contemporary brethren. After casting, the piece will be placed within the next couple of years in the McNutt Courtyard and Sculpture Garden at the Briscoe Western Art Museum in San Antonio.

“I’ve been in the business of Longhorns for more than 50 years, and Kiko is the first artist who hits the mark in sculpting them. He grew up with them,” says the elder Enrique Guerra. The proud father may be forgiven for his bias, but as a rancher dedicated to preserving the purity of the Longhorn breed and as president of the Cattlemen’s Texas Longhorn Conservancy, Enrique Guerra knows his Longhorns.

He also knows collecting. Artifacts in the Guerra Gallery in San Antonio’s Briscoe museum include an exceptionally rare Comanchero jacket that provides a peek into a pioneer Southwestern subculture. Comancheros were mostly Hispanic traders who smuggled guns and ammunition to Comanches in exchange for mules, silver, and stolen goods. “The fringe on the jacket was the camouflage of that era,” Enrique Guerra explains. “It would break the line of the wearer’s body at a distance. It was a Comanche style to twist the fringe, but the velvet collar and embroidered sleeves were Spanish details.” 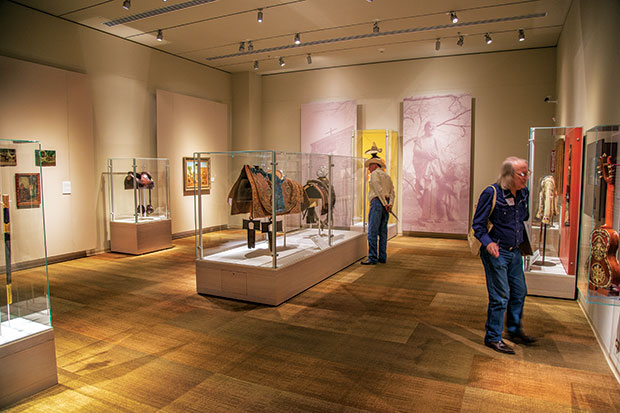 Saddles in the Briscoe’s Enrique and Lydia Guerra and Family Gallery.

A steel, gold, and leather sword on display was presented by Ames Manufacturing Co. of Massachusetts to Mexican President Santa Anna in 1852, presumably in hopes of winning an arms contract with the Mexican army. Several saddles chronicle the evolution of horseback gear, from a rare 17th-Century silk-embroidered Spanish viceroy saddle with iron cross stirrups, to a Guerra family saddle with Mexican and American eagles crafted in silver. Other artifacts from the Guerra collection in the museum include three Mexican army general’s uniforms from about 1836, as well as an 1823 wood, rope, and metal Mexican Empire war drum with the Mexican seal painted on its head and skulls around its shell.

In a short video playing in his namesake gallery, Enrique Guerra speaks of the sweep of history with the wisdom of one who has lived long and learned much from those who came before. “I can say that the Guerras are here to stay,” he concludes, “and hopefully we’ll be here a long, long time.”

The Guerras’ San Vicente Ranch is private, but travelers can learn more about the Guerra legacy and the history and culture of South Texas at other sites mentioned in the story:

The Roma Historic District, a National Historic Landmark, covers a 15-block area in central Roma. Call the City of Roma for more information, 956/849-1411.

Austin-based freelance writer Gene Fowler was recently inducted into the Texas Institute of Letters. Texas Highways photographer Will van Overbeek says working with the Guerra family provided a fascinating look at Texas history, from Spanish frontier days to the present.