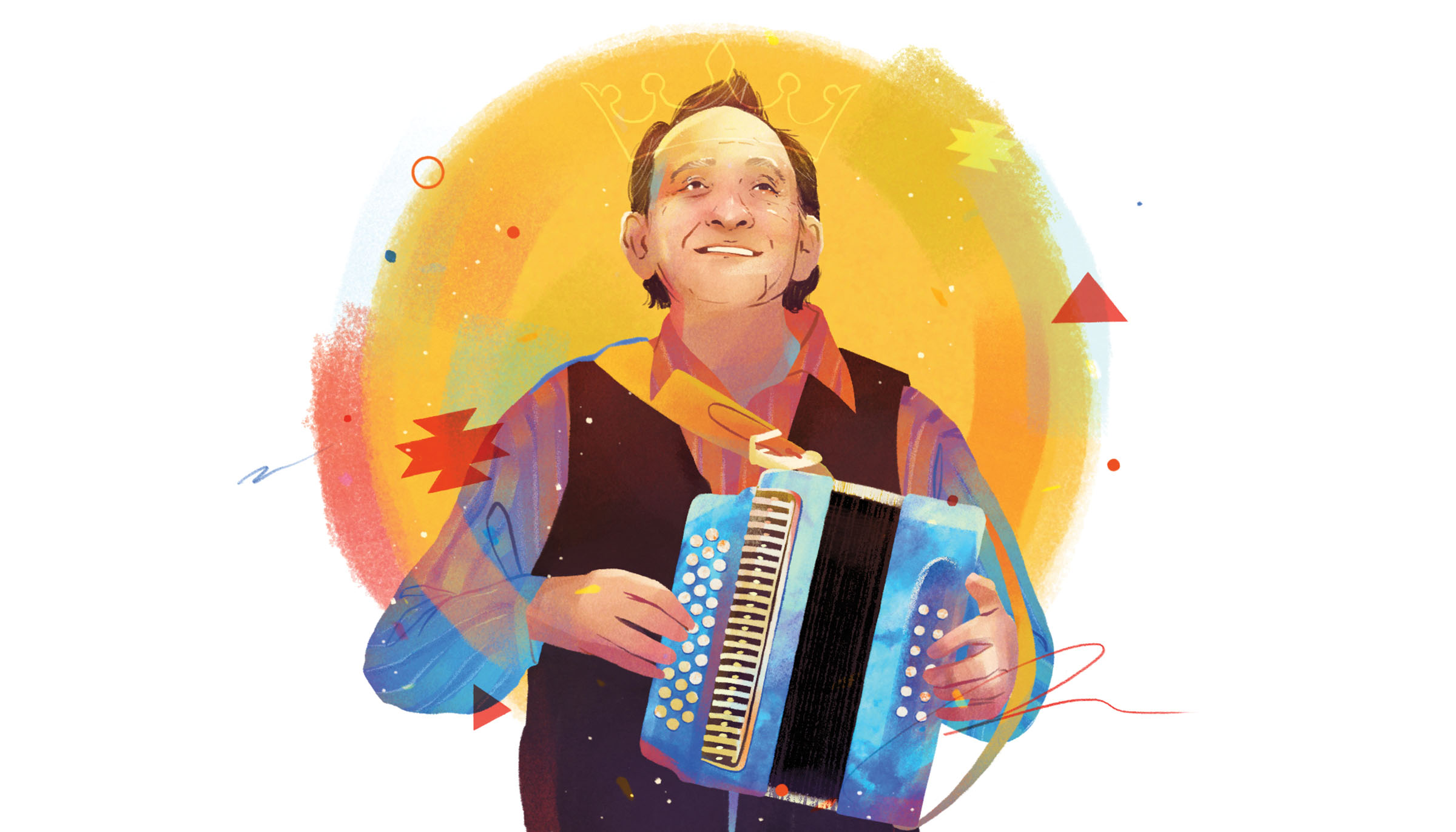 Leonardo “Flaco” Jiménez is San Antonio music royalty. Known as “El Rey de Texas” for his mastery of the accordion, the 82-year-old comes from a pioneering family of conjunto, the soul music of South Texas Mexican Americans. His father, Santiago, was among the first conjunto accordionists to record in the mid-1930s. The musicians of the Jiménez family, including Flaco’s grandfather, Patricio, developed their sound by listening to the bands at German, Polish, and Czech dances around San Antonio and New Braunfels in the early 20th century. They interpreted what they heard into something completely different. Three of Flaco’s brothers, Santiago Jr., Eddie, and Ruben, are also accomplished accordionists.

Flaco, a lifelong San Antonio resident, was a young lion of conjunto, picking up the accordion at age 7 and making his mark in the late 1950s with his first bands, Leonardo Jiménez y sus Caporales, and Los Caminantes. Rail-thin and dashing, he earned the nickname of Flaco, or Skinny. In the early 1970s, roots rocker Doug Sahm recruited Flaco to play on the album Doug Sahm and Band, setting the accordionist on a nontraditional path far beyond his hometown. His crossover success culminated in the 1990s as a member of the Tex-Mex supergroup the Texas Tornados with Sahm, Freddy Fender, and Augie Meyers.

Winner of five Grammy Awards, Jiménez has toured the world and played on more than 100 albums with a “Who’s Who” of musical giants, from the Rolling Stones, to Emmylou Harris, to Dwight Yoakam. The honors continued this spring when the Library of Congress added his 1992 album, Partners, to its National Recording Registry, a collection of “audio treasures worthy of preservation for all time.” But Flaco remains a San Anto homie at heart.

TH: How do you describe conjunto music to the unfamiliar?

FJ: It’s slang, for like a conjunction of three instruments: the accordion, the bajo sexto 12-string guitar, and a slap bass. It was like a trio, you know. Conjunto is Spanish for group, or a collection. They are conjunct. That’s where conjunto comes from.

TH: What is the universal appeal of conjunto?

TH: What have you been up to during the pandemic?

FJ: I’ve been enjoying my time at home with my wife and family. When COVID hit, all the bookings dried up. Most everything has been canceled. I’ve done some Zoom performances and recorded a music video at my home with Michael Quintanilla [a San Antonio media personality], for his Gridiron show, but that’s been it. I’ve also been helping promote the Tacos Jiménez food truck started by my son Leonard and his wife, Gilda.

FJ: Before the coronavirus, I was still playing with Max and Josh [Baca, the leaders of the band Los Texmaniacs]. We’ve done some gigs with Johnny Nicholas at Hill Top Cafe, his restaurant outside Fredericksburg. And we’re finishing recording an album with Augie Meyers, Nunie Rubio, Speedy Sparks, and Ernie Durawa [the core surviving members of the Texas Tornados, performing as the Tornado Legends]. The recording studio has been closed because of COVID, and we’re waiting for it to reopen so we can finish the tracks.

TH: What’s the key to playing conjunto music on the accordion?

FJ: The way to play the instrument is as simple as possible, so people can understand. A lot of accordionists are showing off too much. It’s like putting too much sugar in your coffee. I tell the kids that you can’t win a Grammy just because you think you deserve it. A lot of the young accordionists think Grammys are a prize in a cereal box. They’re wondering, “Where’s mine?” They don’t understand the work you have to put in to earn an honor like that.

TH: Who are some younger accordion players you enjoy?

FJ: Josh Baca and Dwayne Verheyden—they’re examples of good players. [Verheyden is a 29-year-old from The Netherlands.] Dwayne’s dad and mom took him to see me when I was touring in Holland with Ry Cooder. He was a young kid. A few years later, I hear this kid playing and said, “Oh man, it’s me playing the accordion. He plays my same phrasing.” He knows how to speak real good Spanish now. So we converse in Spanish, and I tell him, “I’m sorry Dwayne, but I’m having a little problem speaking Dutch.” But then he says, “No te preocupes, Flaco. Hablame en español.”

TH: What type of accordion do you like to play?

TH: You’re known for your expertise on the accordion’s inner workings—an instrument doctor of sorts.

FJ: If someone in the recording studio breaks a reed or needs their accordion tuned, I’ll help out. But I don’t repair accordions, per se.

TH: Conjunto is a traditional style. Yet, you seemed to consciously break away from ‘puro conjunto.’

FJ: I like to explore things. I don’t like to be a one-track guy. Early on, I decided to play different kinds of music. I like all kinds of music—country, rock ’n’ roll. I wanted to cross over, and I got lucky. In the early 1970s, I started working with Doug Sahm, Ry Cooder, and Peter Rowan. Those three are people greatly respected by other musicians. Word spread fast. Pretty soon I’m playing with Dwight Yoakam and the Rolling Stones.

TH: When you’re recording a session with someone like The Mavericks or Stephen Stills, how do you prepare?

FJ: I improvise when I’m recording. I don’t read charts. I never play the same. I just listen and try to figure out what to play. I’ve got different phrases I like to use. You have to get the feel of the music they’re playing.

TH: San Antonio is known for the Alamo and the River Walk, but beyond that, what makes the city different?

FJ: What I like about San Antonio is that it’s not an industrial city like Chicago, LA, or Houston. Those cities are too industrial. San Antonio is a music city. Like Nashville is to country and New Orleans is to jazz, San Antonio is to conjunto. The whole city has a musical groove. The Tejano Conjunto Festival in Rosedale Park in May and the plazas, whenever there is music, are good places to see conjunto.

TH: We’ve talked in English, but Spanish is your first language. How do you prefer to communicate?

FJ: I’m not good at speeches. People that know me know I let my accordion talk for me.