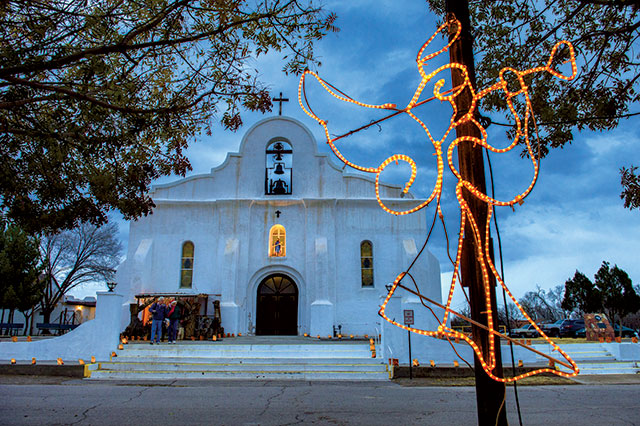 Parishioners spill out of the heavy wooden doors of San Elizario presidio chapel and into the village plaza. The December night is cold and blustery, but twinkling lights, glowing luminarias, and tinseled Christmas trees warm the atmosphere. So do spicy bowls of menudo and steaming cups of champurrado, a hot cocoa-and-cinnamon drink thickened with corn masa.

The El Paso Mission Trail Association provides brochures, audio tours, and travel information at its Mission Valley Visitor Center, located at the SunMetro Transfer Center at 9065 Alameda Ave. in El Paso. Call 915/851-9997. Information for other sites mentioned in the story:

For information about the San Elizario Historic Art District, call 915/851-0093.

Their devotional duties accomplished for the evening, the revelers congregate among San Elizario’s historic adobe buildings, celebrating the holiday spirit and taking pictures with Santa and Mrs. Claus. When the pounding of drums sounds across the plaza, a crowd gathers around a group of dancers in Native American dress adorned with rattling bamboo fringe. The performers of a Danza Matachin group launch into a centuries-old dance honoring Christianity, stomping and spinning with passion.

Welcome to the annual San Elizario Luminaria Festival, a centerpiece of the holiday season on the El Paso Mission Trail and a fitting example of the multicultural traditions at the western tip of Texas. The Mission Trail connects the communities of San Elizario, Socorro, and Ysleta along the Rio Grande on the outskirts of El Paso. While a visit here is interesting at any time of year, the holiday season provides a festive backdrop to explore the El Paso region’s borderland blend of ancestry and customs.

“Christmas definitely has a different feeling here,” says Al Borrego, a painter who serves as board president of the San Elizario Genealogy and Historical Society. “The mixture of different cultures that have grown in the area creates that.”

Established in the late 1600s, the Catholic missions on the El Paso trail are among the oldest settlements in the United States, preceding the San Antonio missions by 30 to 40 years. The two mission churches and presidio chapel—San Elizario was established as a chapel, not a mission—were originally built south of the Rio Grande. But a great flood in 1829 washed away the churches and changed the river’s course. In the aftermath, the communities rebuilt their churches north of the river.

Across the street from the Visitor Center is Ysleta Mission, the heart of Ysleta del Sur Pueblo, a historic Native American village. Spanish Catholic missionaries and Tigua Indians founded the town and the mission after they were expelled from northern New Mexico during the Pueblo Revolt of 1680. About 2,000 Spanish colonists fled south and brought with them members of the Tigua and Piro tribes. The refugees established a string of new towns along the Rio Grande, including Ysleta and Socorro.

Built in 1851, the current adobe church presides over a plaza that hosts ceremonial Tigua dancers on religious occasions, including a luminaria-brightened dance at midnight on Christmas Eve.

Inside the mission, the Tigua influence is evident in paintings on the white adobe walls: Patterns of blue mounds, red pyramids, and corn stalks are interspersed with portrayals of Jesus and La Virgin de Guadalupe. Tightly spaced wooden pews lead to an ornate altar, which showcases a sculpture of the crucifix in front of a mural of blue sky and white clouds. During the holiday season, Christmas trees and a Nativity scene flank the altar. Church members construct the rustic manger each year with wood and hand-formed adobe bricks.

Farther south on Socorro Road, the Tigua tribe exhibits its history and customs at the Tigua Indian Cultural Center. The brown adobe complex features a museum, native craft shops, and demonstrations of tribal bread-baking and dancing.

The Tigua museum recounts the tribe’s expulsion from their original home of Isleta near Albuquerque, New Mexico, during the Pueblo Revolt of 1680, and the founding of Ysleta del Sur Pueblo two years later. Ancient ollas (ceramic jars) found in the Van Horn area illustrate the importance of pottery to the Tiguas. An 1862 black-and-white sketch represents the earliest known image of the rural pueblo, with pastures lined by adobe walls and wood fences backing up to the historic mission church.

The Tigua Cultural Center bustles on Saturdays when women gather early to light a mesquite-wood fire inside an adobe horno. After three hours of heating the oven, they sweep out the coals and push round pans of dough deep into the oven. The smell of sweet mesquite smoke and baking bread suffuses the grounds. Hot out of the horno, the bread has a crispy exterior crunch and a soft and chewy inside.

If you time it right, you can settle in with a $4 loaf of fresh bread and watch a demonstration of the Ysleta del Sur Pueblo Social Dancers, which takes place at 11 a.m., 1 p.m., and 3 p.m. on Saturdays and Sundays. The folk dancers interpret traditional elements of tribal life—a girl waving turkey feathers represents a butterfly at harvest, a boy in a cape of eagle feathers flaps his arms and soars in religious ceremony. Ready yourself, because the demonstration closes with an invitation for spectators to join in a friendship dance.

Heading south on Socorro Road, the next stop on the El Paso Mission Trail is the Socorro Mission, a church founded by Spanish settlers and Piro Indians also displaced by the Pueblo Revolt of 1680.

Inside the church, built by the Piros in 1843, light streams through windows in the building’s five-foot-thick adobe walls. Hefty wooden vigas salvaged from the church’s 18th-Century predecessor support the ceiling. Patterns adorning the vigas—painted in traditional Piro red, yellow, black, and white—represent important tribal symbols, such as the sun and crossroads, says church member Eugene Trujillo.

“Piro means the hottest point of the sun, the heart of the sun,” says Trujillo, who traces his Piro and Socorro roots to the pueblo’s settlement. “We have not been federally or state recognized, because there are so few of us left, but we are still in the area where we were brought hundreds of years ago, and we will continue to be here.”

At Christmas time, Socorro Mission parishioners decorate a tree inside the church and display luminarias around the church and neighboring cemetery. In the nine days leading up to Christmas, church members also put on traditional Las Posadas reenactments of Mary and Joseph’s search for shelter on the eve of Jesus’ birth.

The reenactment of Las Posadas (the inns) is also an important part of the San Elizario Luminaria Festival. San Elizario, located about 15 miles southeast of downtown El Paso, is the outermost point on the Mission Trail. Spanish explorer Juan de Oñate first ventured through the San Elizario area along the Camino Real in April 1598. In 1789, the Spanish established a presidio at the site.

The current adobe chapel, built in 1877 in the Spanish Colonial Revival style, is a cavernous room with arched columns supporting the 40-foot textured-tin ceiling.

Outside, the chapel’s broad façade looms over Veterans Memorial Plaza, where the Luminaria Festival takes place, and the Los Portales Museum and Visitor Center. The museum, which is set in an 1877 adobe home, chronicles local history and Spanish contributions to the New World.

The surrounding blocks constitute the San Elizario Historic Art District, a fledgling arts community with galleries, public sculptures, a couple of restaurants, and the newly opened Old El Paso County Jail Museum (billed as the only jail Billy the Kid ever broke into—as part of a jailbreak). Local artists and craftsmen have transformed about two blocks of historic, low-slung adobe buildings into studios and galleries. The offerings range from Alberto Escamilla’s impressionist paintings to the Amado Peña Gallery’s display of artworks by Peña and others inspired by the renowned Southwestern painter. A self-guided walking tour with informative signs navigates the district, which also hosts a busy schedule of art walks, ghost tours, gunslinger reenactments, and festivals throughout the year, including a ChristKindle Market in December.

During the Luminaria Festival, volunteers place luminarias around the district, casting a candlelight glow over the adobe-lined streets, weather permitting. The luminarias converge on Veterans Plaza, adjacent to the chapel. As evening fades to dusk, the Las Posadas reenactment commences. Actors portraying Joseph and Mary journey around the plaza, repeatedly turned away as they knock on doors seeking lodging in Bethlehem.

A small group of guitarists leads the crowd of spectators, bundled in coats and caps, as they follow the couple and narrate the Biblical tale with song. Eventually, an innkeeper relents and provides the expectant couple with shelter in his barn. Children in tinseled headbands and white garments arrive as angels, and shepherds in colorful robes join the Nativity scene to welcome Mary’s newborn son. It’s a story of charity and wonder that resonates warmly in this frontier crossroads, where residents honor a compelling heritage of first encounters, friendship, and faith.