From the Fort Worth area, Martin has carved out a niche as a middle-of-the-road cowboy 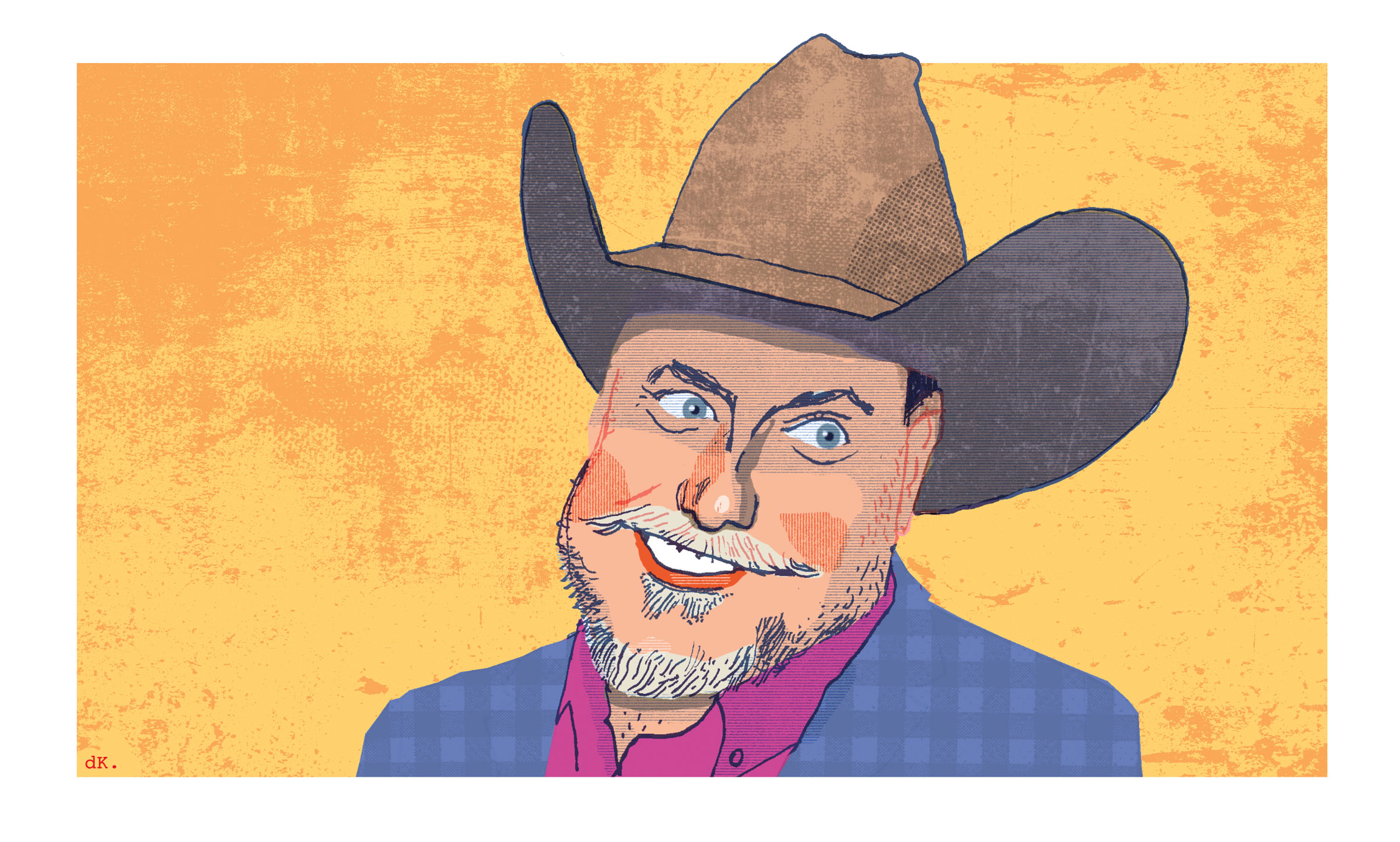 Sporting a cowboy hat, creased blue jeans, a shiny belt buckle, and a confident strut, comedian William Lee Martin is a presence. He commands the stage, telling stories like a goofy friend who just wants to make you laugh after a long day.

Growing up in Blue Mound, Martin started writing at age 5—not jokes, but songs and stories. After attending the University of Texas at Arlington, he drew upon his knack for storytelling in an advertising career. But the nascent comedian felt unfulfilled. Following his grandmother’s advice, he tried comedy, starting under the name “Cowboy Bill” Martin in 1996. He was headlining shows within three years, and by the mid-2000s, he’d opened shows for country singers Loretta Lynn and George Strait. Martin refined his act on cruise ships, self-financed his first TV special (Let the Laughter Roll in 2015), and in 2017 dropped the “Cowboy Bill” moniker to create a more authentic image.

“Bill resonates with people because he looks, talks, and acts like a huge demographic of this country without having an agenda, being negative, or complaining about things,” fellow comedian Steve Gammill says. “That’s very refreshing.”

Now a resident of Newark—20 miles north of Fort Worth—Martin has five children with his wife, Michele, and four grandchildren. Outside of performing, Martin runs the Cowboys Who Care Foundation, a nonprofit he started in 2011 to donate cowboy hats to kids with life-threatening illnesses.

On stage, Martin incorporates his audience into shows, playfully staring them down for their reaction—whether the joke flies over their heads or hits close to home. “He’s always writing, even up to showtime,” Gammill says. “I’ve seen him write a setlist, then not follow it at all if the show and audience take him somewhere else.”

It’s an ad-lib formula that Martin has translated into an expanding career. Last year, he signed a deal with Nashville’s Myriad Productions to contribute to its songwriting team. And this March, he fulfilled a dream when he made his standup comedy debut at the Grand Ole Opry.

TH: You started comedy at age 29—why did you wait until then?

WLM: I wrote advertising for nine years out of college and absolutely hated every minute. I was miserable, then lost my job when they sold our company. My grandmother said, “Go out and find something to make you happy.” It’s 26 years now we’ve been on this journey.

TH: Do you remember your first time onstage?

WLM: Arlington, Hyena’s Comedy Nightclub. My opening line was, “My name is Bill Martin. I’m not going to sing to you, but ironically, my life has become a sad country-western song.” The headliner, Charles Brockman, killed, and I had to follow him. I couldn’t remember any lines. I said, “Sorry, it’s my first time; I’m a virgin.” They all clapped, and I had it! Then I lost it again. Now, I have flop sweat. I said, “Wow, this is like being a virgin. I’ve tried twice and petered out kind of fast. Why don’t we hug for 15 minutes and I’ll try again?”

TH: What are some favorite Texas places to perform?

WLM: A 500-seater is the sweet spot. Big crowd, but not too big that you don’t feel connected. Places like Pines Theater in Lufkin, Cactus Theater in Lubbock, the Hippodrome in Waco. It’s amazing how many towns have great old theaters.

TH: Do you notice different responses performing outside of Texas?

WLM: I’ve always tried to write jokes that land from Maine to California. But as a fifth-generation Texan, there’s that thing I carry with me. People have the same feelings about Texans and the Dallas Cowboys. They either love them—and really love them—or hate them—and really hate them. I’m OK with both groups. Sometimes, especially in California, the cowboy hat can be a detriment—they have a preconceived notion of who you are. I take pride in not being too stereotypical. I’m doing my own thing in my own voice. I’m too old not to.

TH: Your act is less vulgar than before. What changed?

WLM: My wife is constantly on my cussing, saying I can’t get into heaven. I’m counting on heaven grading on a curve. I started clean, then the next 15 years got bluer and bluer. About five years ago, I made wholesale changes in the act. I felt I was moving further from my faith. I took out 98% of the language. We advertised it as a clean show. Then people said it wasn’t clean enough. But the show’s written for grown-ups. The “Standing in the Middle” tour was about being middle-aged, in the middle of raising a family. Last year’s “All American Mutt” tour was DNA testing showing I’m nothing more than a mutt. This tour is “Hawg Wild”—I can do anything I want.

WLM: Standing in the Middle came out in November 2019; The Nutcracker in December. We all know what happened March 2020. My marketing firm said, “Bill, you need to do a Zoom show.” I said, “Standup without an audience? Absolutely not. That’s a lecture, not comedy.” They told me to just talk into my computer. It was the dumbest idea I’dever heard. But the world was inundated with negative news. Two days later, I took my computer out, started a Facebook Live, and talked into it like I was talking to a friend. The next day I did it again. Then the next day. People started listening. At one point, 5,000 people watched me play the video game Red Dead Redemption. It was therapeutic to talk and put smiles on faces.

TH: How did Cowboys Who Care get started?

WLM: The parents of Ashley Miller, a girl with a rare form of cancer, asked to put my name on a golf tournament and raise money for her. She lost her battle in June 2011. They invited us to the vigil the night before she went off life support. I was devastated. I wanted to help but didn’t know how. One day, I Googled kids with cancer images. They had these smiles and big bright faces. In the mirror, on a rack, I saw my cowboy hat. It hit me—these kids need cowboy hats. What 7-year-old doesn’t want to be a cowboy or cowgirl? I reached out to Resistol. The president immediately responded, telling me his stepson has been in cancer treatments since he was 3 years old. He said, “The warehouse is yours.” I built a website. One week later, a lady in Illinois running a Western-themed camp asked for 300 cowboy hats. We loaded up the U-Haul trailer and delivered them. We’ve given away over 10,000 hats across the country.

WLM: Simple but impactful is best. My buddy Quinn Dahle’s neighbors are lesbians. He pretends he doesn’t know. They’ll say, “This is my partner, Tammy.” And he goes, “Well howdy, partner.” One of mine: The only word I don’t like being called is “redneck.” I came home from school crying because the kids called me a redneck. My dad said I wasn’t a redneck; I was a cowboy. I asked what’s the difference? “Acreage.”

William Lee Martin’s “Hawg Wild” comedy tour runs through November, including shows Aug. 19 in Granbury, Aug. 20 in Odessa, and Sept. 4 in Lake Whitney. Find more tour dates and keep up with Martin’s other projects on his website, williamleemartin.com.