Culture on the Concho: The San Angelo Museum of Fine Arts

An artistic outpost in West Texas

Written by Art Williams, Photographs by Will van Overbeek | From the November 2017 issue | Updated: November 9, 2017 | Filed Under: Culture 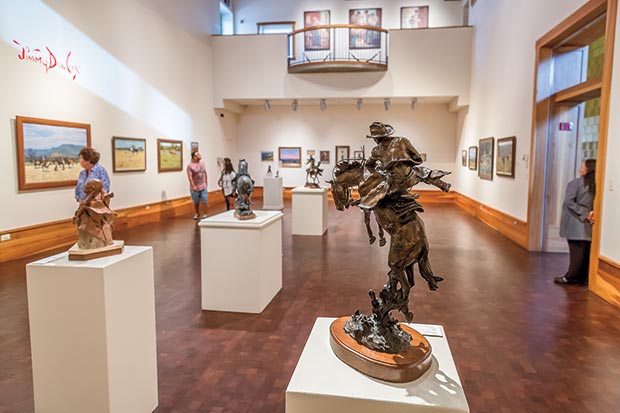 An exhibition of works by the late San Angelo artist Jimmy Don Cox.

Amid the rugged terrain of the Concho Valley in West Texas, on what was once the edge of the wild frontier, the San Angelo Museum of Fine Arts stands as a vibrant cultural outpost. Overlooking the Concho River just south of downtown, its three-story modernist limestone building features a swooping metal roof whose shape brings to mind a saddle or a covered wagon. Within the 30,000-square-foot space, three galleries highlight the state’s rich artistic traditions, from Spanish Colonial-era paintings to contemporary Texas art.

The museum first opened to the public in 1985 in a different kind of outpost—the rustic 1868 Quartermaster Building at Fort Concho National Historic Landmark, just a few blocks away. Founding Director Howard Taylor agreed to join the nascent organization because he was drawn to what he calls the city’s “frontier openness.” He arrived from Philadelphia in 1984 with big ideas and the desire to make the museum “a crossroads for the whole community.” Today, the museum anchors the San Angelo Cultural District, which encompasses the San Angelo Visitor Center, the Bill Aylor Sr. Memorial RiverStage amphitheater, the Railroad Depot and Museum, and a scenic paseo and festival grounds, among other attractions.

Since moving into the new building in 1999, the San Angelo Museum of Fine Arts’ holdings have expanded from about 80 to 860 works of art. They include a growing collection of Spanish Colonial and Mexican religious art that Taylor describes as “not big, but one of the best.” Among the key objects is The Vision of St. Francis, an impressive oil painting (more than 10 feet tall) made in 1695 by the Mexican artist Cristóbal de Villalpando. Also featured are works by Texas artists of more recent years, such as a rare 1940s plaster sculpture of a forlorn couple by the late Austin artist Charles Umlauf.

The collection is particularly strong in ceramics, mainly due to the museum’s acclaimed National Ceramic Competition—held on even-number years (April 20-June 24, 2018)—and Ceramic Invitational Exhibition—held on odd-number years. This focus on ceramics has inspired private collectors to donate functional and fanciful pieces to the museum, among them Italian Futurist tea sets, a Japanese Imari-ware dish, and a humorous bust of a man smoking a cigarette titled No Smoking by San Antonio artist Verne Funk.

Another strength is sculpture, which can be found both in the galleries and on the grounds. Several sculptures adorn the museum’s open-air third-floor terrace, including a geometric granite monolith titled Vanishing Edge Round by the late Rockport artist Jesús Moroles. About a dozen others can be found at Sunken Garden Park, about seven blocks to the west. This riverside municipal park serves as the venue for the biennial Richard and Pam Salmon Sculpture Competition, established in 2012 by the museum in collaboration with the city, Angelo State University, and the Chicken Farm Art Center (a local artist collective).

With the success of the ceramic and sculpture competitions, the museum added a plein-air painting competition in 2014. Called En Plein Air Texas, this weeklong event takes place every October. Participants compete in capturing their impressions of the surrounding landscape while out in the elements.

In addition to displaying the winning works from these various competitions, as well as works from its collections, the museum hosts traveling exhibitions of art from diverse cultures, ranging in recent years from ancient Greek and Egyptian ceramics to Islamic arts and Venetian paintings. It also organizes shows by contemporary artists, many of whom hail from the Lone Star State, and exhibitions such as Inside-Out: Women’s Status and Roles from Foundation to Silhouette (Sept. 20, 2018-Jan. 20, 2019), which demonstrates how the undergarments of American women have reflected their changing roles in society from Victorian times to the present.

On any given day, visitors can be found wandering through the museum’s various displays, participating in art-making activities, or attending guest lectures. The site draws about 85,000 visitors a year, and the neighboring area is abuzz with activity. Yet just a few years ago this part of the city was in decline, and many of its storefronts sat empty. That began to change when the museum decided to branch out by restoring some of the nearby structures and converting them into additional spaces for art. This initiative gathered steam in 2015 when the Texas Commission on the Arts designated the 200-acre area a cultural district. 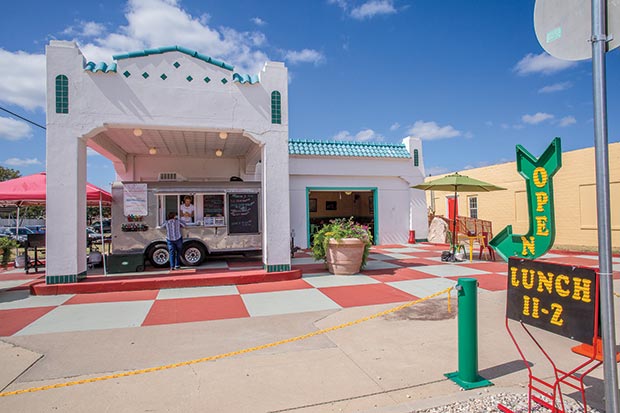 The Homemade by Helen food truck.

The San Angelo Museum of Fine Arts now owns and operates several buildings on South Oakes Street, adjacent to the museum. One of these, the Coop Gallery, offers individuals and groups a place to display their artwork. Another, Gallery Verde, serves as an extension of the museum—a place for satellite exhibitions and community outreach. This gallery tends to spotlight the work of contemporary Texas artists and photographers, such as the fantastical taxidermy-and-ceramic creations of Eric and Morgan Grasham, an East Texas couple who exhibited there in 2016 after three years as artists-in-residence at the Chicken Farm Art Center. Morgan describes the intimate gallery space as “more approachable, and perfect for emerging artists like us. It’s a great place to experiment, and to see things that are totally different and new.”

An office within Gallery Verde serves as the headquarters for the Center for the Advancement and Study of Early Texas Art (CASETA). The organization got its start in 2003 and joined forces with the San Angelo museum in 2013. CASETA works to preserve and raise awareness of Texas art through publications, scholarly symposia, and educational materials, and by directing resources to archives and oral history projects across the state. Its annual Symposium and Texas Art Fair takes place over the course of three days each spring in various locations, including the upcoming event April 27-29 at the Witte Museum in San Antonio.

The 2017 symposium, held at the Fort Worth Community Arts Center, covered such intriguing topics as 19th-century German artists in Texas, the Fort Worth art scene of the 1920s and ’30s, and the work of the late Houston modernist painter Dorothy Hood. Although the ticketed symposium tends to draw museum professionals, scholars, and collectors, all are welcome; and the related (free) Texas Art Fair certainly has broad appeal, with works of early Texas art (described as more than 40 years old) presented by some of the state’s leading dealers.

In addition to establishing these new partnerships and gallery spaces, the San Angelo Museum of Fine Arts has converted a former gas station at the corner of South Oakes Street into an open-air eatery, with a food truck operated by Homemade by Helen offering a tempting menu of down-home fare (think Frito pie, pulled-pork sandwiches, and homemade banana ice cream). Renovations are currently underway at a fourth building that will accommodate artists-in-residence, with a pavilion behind it for art fairs, exhibitions, and entertainment. Taylor and the museum are also working with the downtown Tom Green County Library to transform a second-floor space into a gallery for the museum’s expansive collection of more than 3,000 pieces of American glass—everything from art deco light fixtures to contemporary sculptural works by the likes of Texas studio-glass pioneer Robert Willson.

Taylor admits, “If there isn’t something under construction, I get fidgety.” This impulse has served him well. In his 33 years with the San Angelo Museum of Fine Arts, Taylor has made great strides in putting San Angelo on the map as a destination for art. However, as Taylor is fond of saying, “It’s not just about art on the walls, but art in our lives—and the community is the greatest work of art.” Through its various initiatives in the community, the San Angelo Museum of Fine Arts is not only preserving and nurturing Texas art, but also expanding the cultural frontiers of San Angelo.

The San Angelo Museum of Fine Arts’ next monthly Family Day is Dec. 9, 2017, with free admission and a Tuba Christmas performance.