Giddy(Up) at Wildcatter Ranch in Graham 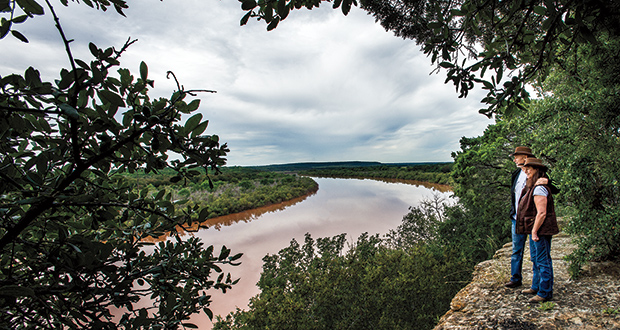 Nothing makes me feel like a 10-year-old girl again like a trip to a West Texas ranch. I’ve joined my husband and a few families for a short post-breakfast wagon ride, and I’m as giddy as the kids. Pulled by a shiny John Deere tractor, we’re heading down a hill at Wildcatter Ranch, near Graham, to a pasture where a small herd of Longhorn cattle awaits their morning snack.

The Wildcatter Ranch is about seven miles south of downtown Graham at 6062 Texas 16, roughly 90 minutes northwest of Fort Worth. Lodgings include 16 cabin suites, each with a fireplace, large bathroom, mini-fridge, and either queen beds or a king bed. In addition, a two-story hotel with 16 rooms sits across from the restaurant; and two remote guest cabins each offer two bedrooms. Finally, Herron Bend, a four-bedroom home originally built for the ranch owner, sits on 26 private acres overlooking the river. Overnight stays start at about $149. Call 940/549-3500.

Clint West, the Wildcatter’s head wrangler, pulls the tractor and wagon into the grass and we scramble out. As we approach the rough-cedar fencing separating us from the giant beasts, Clint tells us the Longhorns’ names, pointing out Big Boy, Sparkle, Red 1, Red 2, and others. As Clint gestures to a brick-red fellow who’s taking his sweet time ambling over
to us, I’m immediately smitten.

“And that’s Cry Baby,” Clint says with a friendly drawl. “He gets upset if he thinks he’s not getting enough attention.”

Clint holds out a bag of cattle cubes so that we can feed them, showing us how to hold the treats in our hands so that we don’t get slimed by slobbery mouths. Sure enough, the Longhorns know exactly how to pluck them neatly from our fingers, and how to turn their heads so their curved horns don’t get caught in the fence rails. We all giggle at this rare event, taking pictures and marveling at how joyful it is to interact with creatures that seem like colossal, slow-moving puppies.

At that instant, I realize why I have long loved spending time at a ranch, and especially this one, which opened in 2004 just an hour and a half west of my Fort Worth home. Here, the headaches of city traffic and rushing around vanish. Standing by a wooden fence, miles from signs of the modern world, I’m focused on the enormous brown eyes of an animal whose existence speaks of a heritage as old as Texas itself.

Breaking into my reverie comes a pitiful, deep-throated whine: True to his name, Cry Baby feels neglected when a few minutes pass without someone giving him a treat. I think he’s commanding us to stop fawning over all those other Longhorns and feed him some more, and I can’t help but oblige him until it is time to go.

Were it not for the prospect of exploring the ranch on horseback, I might spend the day beside that fence. But the daily 10 a.m. ride is next on our schedule, and Clint gets six of us saddled up after giving us a quick riding lesson. A fan of a beautiful buckskin horses since I was a child, I’m delighted that Clint has assigned me a horse called Dusty, while my husband is given a huge Belgian-quarter horse mix named Ted.

Like most guest ranches, the Wildcatter specializes in easygoing horses that are content to walk and not run. Forming a queue, we slowly head out for trails that crisscross various areas of the hilly, 1,500-acre spread. Here again, I feel like the luckiest kid alive, energized by the chance to view from horseback the magnificent curves of the Brazos River as it winds through the Palo Pinto Mountains.

Along the way, we stop so that Clint can point out landmarks like a grassy point of land abutting Conner Creek, where a deadly Comanche raid took place a century and a half ago. To this day, Clint tells us, folks find arrowheads on that patch of property, which lies close to the creek’s junction with the Brazos. Riding the rocky landscape, dotted with cactus and mesquite, cedar, and live oak trees, our only company is the occasional hawk soaring overhead in the clear, blue sky.

In the early afternoon, my husband and I join Clint for another look around the Wildcatter, this time aboard an open-air Jeep with massive tires that can handle the ranch’s boulder-strewn terrain. He stops at a limestone bluff 75 feet above the Brazos, noting that the Comanche once ran buffalo to their deaths from cliffs like these. On one rutted path, he pulls over to show us pieces of flint rock; we can see how easily arrowheads would have been made from these and even where someone had begun chipping away at a few, presumably for that purpose.
We also pause beside a prickly pear cactus to examine the sticky white substance on its paddles. It’s excreted by the cochineal “beetle,” a scale insect known for producing a purple-red dye used for centuries by various civilizations, and Clint shows us how rubbing the taffy-like goo turns his fingers a deep magenta.

Our conversations with Clint keep us amused, too: As he takes us around the archery and skeet-shooting ranges, he shares stories about entertaining guests from around the world. The Brits, Germans, and Chinese enjoy a Texas ranch weekend as much as we do, it seems. Playing cowboy appeals to all of us, whatever our age and whichever country we call home.

Whiling away the rest of the afternoon beside the Wildcatter’s swimming pool on its native stone deck, we admire a view of scrubby mountains for miles and miles. Guests who want to book a massage can do that at the Wildcatter spa, but we content ourselves lounging under the infinite sky.

At suppertime, we make our way to the Dinner Bell, the Wildcatter’s restaurant, which lies a short walk from our cabin. Run by three women who also own a restaurant in Graham by the same name, this steakhouse fits perfectly with the ranch’s laid-back vibe. An appetizer of crispy-crusted, fried avocado slices, which we dip in a spicy aioli, is a tasty prelude to one of the best chicken-fried steaks we’ve had in a long while. Crunchy on the outside and fork-tender inside, the steak comes atop a shallow pool of peppery cream gravy, with crisp, buttery grilled asparagus spears on the side.

Afterward, we wind down on the porch outside our spacious cabin, one of 16 sitting atop a bluff. Looking up at the sparkling quilt of stars in the clear night sky, it’s good to feel like a kid again, and good to have a ranch nearby that can evoke such spirit.