A tour of the Texas General Land Office 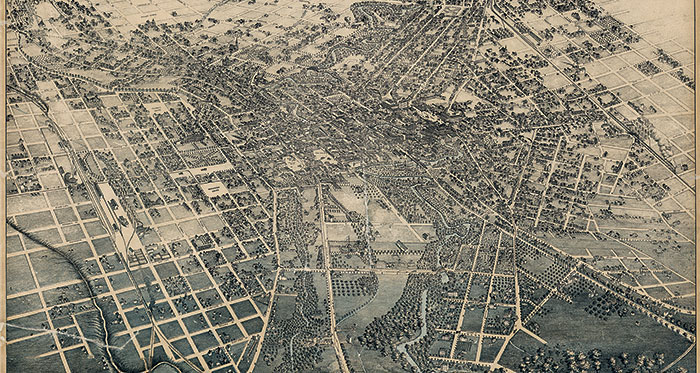 It could be worth another look through that musty box of family records before packing it into the corner of the attic, or worse yet, sending it off to the shredder.

Take the case of Patrick Martin: The Alabama resident had long admired a vintage Texas map he inherited in a batch of historical family records, but had no idea of its value until he took it to an appraisal event held by Dallas-based Heritage Auctions last year. Auctioned this past March, the antique document, a super-rare 1849 lithograph signed in brown ink by land agent Jacob De Cordova, brought a cool $149,000.

De Cordova had commissioned an employee of the Texas General Land Office (GLO) to create the map, which depicts counties in various colors and shows mid-19th Century forts and Native American communities. The GLO also has a copy of the rare 1849 map, and $20 reproductions are the best sellers of the agency’s Save Texas History program, which markets prints of its maps to raise funds for the preservation and digitization of its collection of 35.5 million documents and 45,000 maps.

The real value of the General Land Office holdings, of course, transcends the monetary. As Texas Land Commissioner Jerry Patterson says, “The history of Texas is the history of land.”

Housed in the Stephen F. Austin Building on Congress Avenue in Austin, a few blocks north of the Capitol, the General Land Office manages state lands and mineral rights, and also keeps the archives of Texas land grant records and maps dating to the 18th Century. The agency offers weekday tours of its collection for groups of up to 25 people, providing close-up views of rare maps and documents.

The Republic of Texas Congress established the General Land Office in late 1836, making it the first agency of the newly formed government.

Earlier this year, I met James Harkins, the GLO’s director of public service and outreach, for a tour that started in the agency’s research room. Harkins pointed out the portraits of past land commissioners, a 1920s drafting table, and a display case for temporary exhibits, which currently focuses on Tejanos who fought at the Alamo.

One of the GLO’s most famous employees was William Sydney Porter, a draftsman who worked for the agency in the late 1880s and later drew on his experience in the short stories he wrote under the pseudonym O. Henry. Harkins explains the Porter connection when our tour comes across a black-and-white photo containing the famed writer, as well as a Porter-drawn map of Kent County, notable for the short-story master’s landscape doodle at the top.

The GLO tour also features several items that were carried by Texians during the 1836 “Runaway Scrape” after the Alamo battle, when the settlers fled eastward from the advance of Santa Anna’s army. Those include the Registro, the registry book of Austin’s Old 300 colony—Austin’s first group of settlers in Texas—and a seven-by-eight-foot colony map, now faded brown, brittle, and pieced together.

Other noteworthy items exhibited by the GLO include the military discharge and land-grant papers for Sam Houston and David Crockett. Davy’s document states that he was “discharged by death.”

To preserve such important documents, Patterson started the GLO’s Save Texas History program in 2004. Through the program, the agency has scanned some 2.5 million maps and documents and posted them online, and continues to scan items at a rate of 7,000 per month.

During my visit, I picked up a “bird’s eye view” map of San Antonio circa 1886 as a souvenir. Hanging above my writing desk, it’s a perfect tool for inspiration. When you buy a print from the GLO, you’re not only getting a fine work of art, you’re making a contribution to the preservation of history for future Texans. “As long as there’s a Texas,” says Harkins, “these maps will be preserved.”

The General Land Office’s Save Texas History annual history sym-posium is set for Sep. 20 in Austin. The title is “Making Waves on Land and Sea: Legends and Controversy in Texas History.”

The Texas General Land Office is at 1700 N. Congress Ave. in Austin. For tours, the agency tries to accommodate walk-ins, but appreciates appointments. Call 512/463-5277.