Written by Julia Jones | Updated: May 7, 2021 | Filed Under: HistoryTravel News 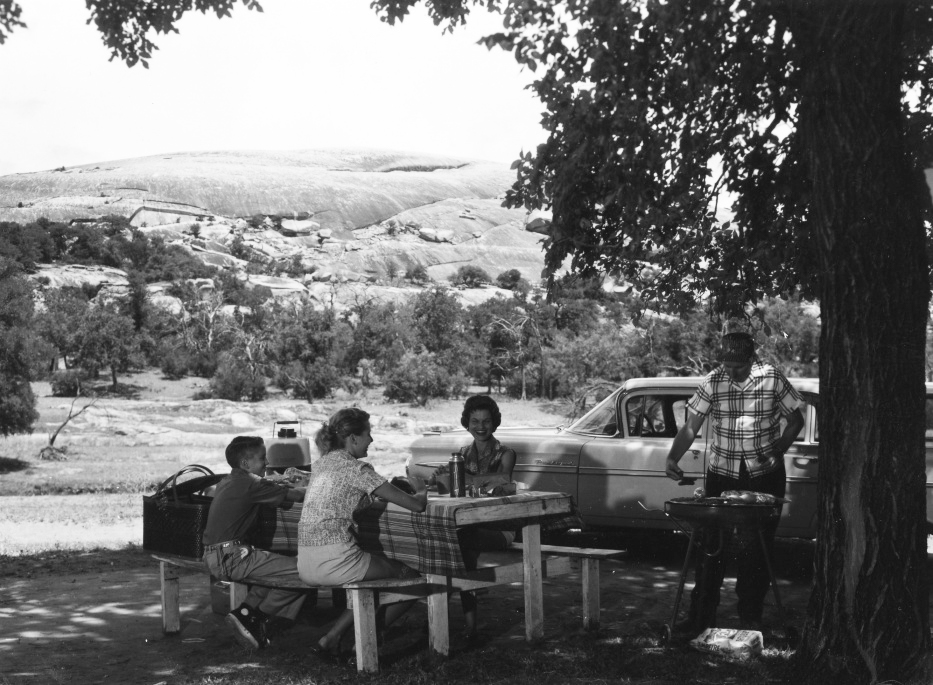 A family enjoys a roadside park near Enchanted Rock State Natural Area in Fredericksburg in 1968. Photo by Herman Kelly

On May 8, 1846, a train of ox carts carrying 120 pioneers rumbled to a halt, 4 miles north of the upper Pedernales River in the Texas Hill Country, at a clear stream they named Barons Creek to honor their leader, John O. Meusebach. Meusebach, who was two weeks short of his 34th birthday, had previously been known as “Baron Otfried Hans Freiherr von Meusebach” in the duchy of Nassau. But he had renounced his noble title and entered Texas proud to be a common man.

The whole company were Germans, and they had been on the road for 16 days. Starting from their principal town of New Braunfels, they had mostly followed the old Pinta Trail that ran northwest from San Antonio. Most were from the Rhine River valley in western Germany, and they felt peculiarly at home on the Pedernales, where the topography of clear streams tumbling from limestone hills was much like home.

Meusebach was the new commissioner general of the Adelsverein, the Society for the Protection of German Immigrants in Texas, which had been founded in 1842 to sponsor German immigration into Texas’ unsettled reaches. Between 1844 and 1847, at least 7,000 of them had arrived, only to learn their landing point was a stew of diseases, their vast land grant lay hundreds of miles inland, and owing to mismanagement on the part of the first commissioner, Prince Carl of Solms-Braunfels, they were out of supplies and money. The immigrants suffered horribly; hundreds, perhaps thousands, died either on the coast or the journey inland. But the Germans’ journey, however perilous, shaped both the Hill Country and the state for years to come.

They established a base and way-station in New Braunfels in March 1845, planted crops, and pushed further inland the next spring. The Pedernales was still 30 miles short of their land grant on the Llano River, but the spring season was wearing late and, says Betty Eckert of the Pioneer Museum in Fredericksburg, “the land further west was not as fertile as this.” Meusebach had explored this area the previous August and was satisfied with its abundance of timber, building stone, and good water in Barons Creek. This would serve as a forward base for colonizing the Pedernales. 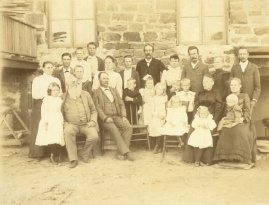 The Meusebach family, gathering shortly after John’s death in 1897.

The Germans laid out a new town in the Rhine fashion—a broad avenue that roughly paralleled the stream—and named it for Prince Frederick of Prussia, whose support Meusebach had secured before leaving Germany. Meusebach purchased 10,000 acres on the Adelsverein’s credit—shrewdly not divulging their perilous finances—and he provided each family a town lot and outlying farmland. On the town square, they erected the octagonal Vereins-Kirche, or “Society Church,” which was shared by different denominations on alternating Sundays, and which also served as a town fortress and meeting center.

Meusebach deputized others to manage the town, as he was frequently absent to manage the affairs of the Adelsverein. J.L. Ransleben opened a store; the Nimitz family started a hotel. The first doctor, Wilhelm Keidel, found the settlers suffering from dysentery and stomach aches. The first postmaster, Theodor Specht, operated a store where the Comanche came to trade. Chief Santa Anna even brought one of his wives to give birth there.

Unknown to the Germans, this land was the domain of Penateka Comanche natives, and the American Indians’ permission to live there was imperative. The American Texans had been warring with them for years, and most of the Comanche chiefs had perished in the Council House Fight in San Antonio in 1840. Texas Gov. J. Pinckney Henderson sent to warn the Germans against venturing into Comanchería, but Meusebach had already made contact with them.

The Comanche chiefs were impressed. Where Americans tried to make the Comanche move away, the Germans asked permission to live on and share the land and become friends and traders. Where Americans tried to stay separate from the natives, the Germans said the natives would be welcome into their towns at any time. And they were impressed with Meusebach himself; an imposing 6 feet, 2 inches tall with a flaming red beard, they called him El Sol Colorado, the Red Sun. With the promise of presents, and the agreement to leave a German intermediary to live among the Comanche—Emil Kriewitz volunteered—a treaty was signed on May 9, 1847.

Over the years, individual raiding parties from numerous tribes looted some outlying farms and took some children as captives, but the treaty itself held—perhaps the only agreement ever made between white people and American Indians that was never broken. This annoyed American Texans back to the east. In their long-running and bloody war with the Comanche, they had begun taking the upper hand only since the invention of repeating revolvers. After a couple of sharp defeats, the Comanche were ready to make peace, and now it was the Germans who stepped in and did it. 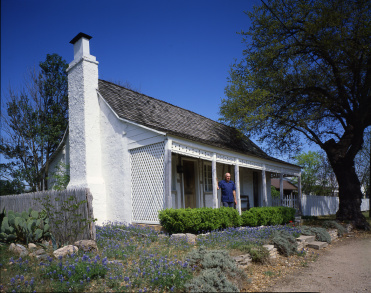 A year after the agreement was signed, the U.S. Army established Fort Martin Scott 2 miles east of Fredericksburg and manned it with two companies of infantry and two of dragoons. It was the first federal military installation built in Texas and was meant to protect travelers on the new road to El Paso, which was now part of the state. The soldiers were never needed to fight the local Comanche, however. In fact, the Germans sometimes got on better with the Comanche than with the army.

In June 1850, by which time Gillespie County’s population topped 1,000, storekeeper John Hunter, a Tennessean who married into the German community, refused to serve liquor to a drunken soldier. A fight ensued, and Hunter stabbed the soldier in the scuffle. Hunter escaped punishment, but the next day vengeful soldiers burned the store, which doubled as the town clerk’s office, and prevented townspeople from fighting the fire. The first three years of Fredericksburg’s records were lost in the blaze.

In 1847, a new group of Germans founded four settlements in the Llano River valley. A wagon road was also blazed 80 miles east to the capital of Austin, but “travel was not easy,” says Evelyn Weinheimer, archivist for the Gillespie County Historical Society. “The Germans in Fredericksburg were isolated,” she said. “Many were able to maintain their language and culture through daily living, their music, and social activities.”

In agriculture, the Americans grew corn for food and cotton for cash; the Germans quickly added vegetable gardens and smokehouses—and orchards for the future. The first houses in Fredericksburg were erected quickly of oak logs stood on end in trenches, but the settlers soon replaced them with a fachwerk of stone masonry filling in a timber frame—far more solid and lasting than the Americans’ preferred log cabins. The Germans built stoves rather than using the Americans’ smoky fireplaces. In these and other ways, the Germans quickly surpassed the Americans in material culture—and they did it without slaves. Few Germans who came here for their own freedom and opportunity would countenance owning another human being. By the time of the 1860 census, only five families in Gillespie County were slaveholders, none of which were German. 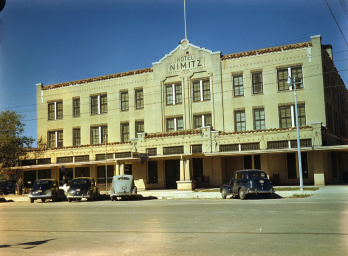 The conflicts with Americans led many Germans to maintain their own traditions rather than assimilate fully. Some declined to even learn English; for some years Fredericksburg locals would translate for townspeople and outsiders, which was a convenient way to resolve conflicts before they could escalate.

Frederick Law Olmsted, an American travel writer who later became famous as the landscape architect who designed Central Park in New York City, wended his way through Texas less than 10 years after the establishment of Fredericksburg. All the while, he was told incessantly how dirty and lazy and venal the Germans were. Upon reaching their settlements he was shocked to discover that nothing was further from the truth. “I never,” he wrote, “except perhaps upon awakening from a dream, met with such a complete change.” At one supper, Olmsted was served two courses of meat, vegetables, salad, fresh bread and butter, and a compote of peaches. The isolated German world had achieved a superior standard of living.

The slavery issue did not go away; impending secession and civil war divided opinions among the German settlements. Back in New Braunfels and the other eastern towns, Germans lived more closely among slave-holding Americans, and many either came to accept the “peculiar institution,” or else decided to keep quiet and not antagonize their neighbors. In Fredericksburg and elsewhere in the west, pro-Union sentiment was stronger.

Back in Austin, Texas Gov. Sam Houston was also a strong Unionist, and he conceived a scheme to inflate the number of Texas Rangers with other loyalists, so that if war came he would have an effective Union cavalry under his own command. He appointed as his recruiter Fredericksburg’s Jacob Kuechler, who could be counted on to pick Germans also loyal to the Union. The scheme failed when pro-rebel Rangers stormed San Antonio and compelled the surrender of the federal forces there, and Fredericksburg and the other western German towns tried to lie low. Germans contributed to funding drives, and Charles Nimitz raised a rebel rifle company. Still, Confederate officials became incensed at the number of Germans evading conscription, and rebel irregulars began patrolling for draft dodgers. Kuechler and several dozen others from the western towns tried to reach Union territory via Mexico, likely intending to join the Northern army. But they were overtaken by Confederate militia at the “Battle” (massacre, more so) of the Nueces on August 10-11, 1862. Kuechler and several others escaped, but 36 Texas Germans were killed.

After the war, Fredericksburg progressed in tandem with the rest of rural Texas. The first Gillespie County Fair, in 1881, was also Texas’ first. Electric lights were turned on in 1896, and the railroad arrived in 1913. (Oddly, Fredericksburg did not incorporate until 1928, more than 80 years after its founding, and does not show up in the U.S. Census until 1930, population 2,416.) 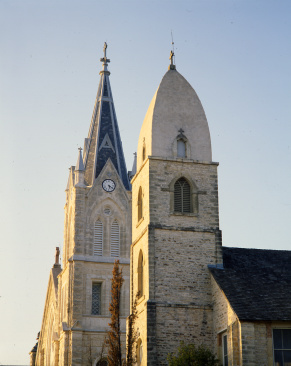 Two of Fredericksburg’s most historic churches stand side by side, the old (1861) and the new (1906) St. Mary’s. Photo by Jack Lewis

During World War I, Texas passed anti-German laws and The University of Texas ceased funding of the German department for about a year. Texas Germans came under scrutiny again, although it was probably as much from old bad blood as new suspicions of disloyalty. Some German descendants have shared stories of their ancestors being targeted, even lynched, for speaking German. Bankers examined accounts to make sure the Germans were buying war bonds; casual visitors would scan parlor walls for pictures of the kaiser.

The anti-German feeling arose again during World War II, but much less powerfully, perhaps thanks in part to the fact that commander-in-chief of the Pacific Chester Nimitz was from a prominent Fredericksburg family. He joined the Navy before finishing high school, telling one teacher not to worry, he would return home as an admiral. And after the war, Nimitz did come home and was awarded his diploma from a high school in Kerrville.

Upon their arrival 175 years ago on May 8, the Fredericksburg Germans planned for the future. Enduring hardship and hostility, they built in stone, to last; they educated their children and diversified their economy. But even those optimistic pioneers would likely be surprised how greatly succeeded in building an American city with a distinct gemütlichkeit—a happy, friendly atmosphere of wine and tourism, and a history unique in the United States.