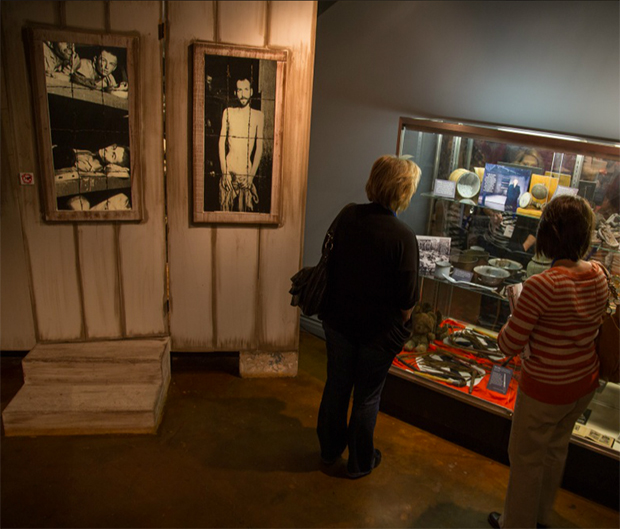 One of the deepest scars in the history of humankind is the Holocaust. Friday, January 27 is International Holocaust Remembrance Day, a day that marks the anniversary of the liberation of Auschwitz-Birkenau. It’s set aside, by the United Nations General Assembly, as a day to never forget the Nazi-era victims while sharing messages of tolerance, peace and hope for the future.

“What is done cannot be undone, but one can prevent it happening again” – Anne Frank

Here are places in Texas with year-round reminders.

The stories of Houston-area survivors of the Holocaust are incorporated into the museum’s showcase of film footage, artifacts, photos and documents that tell the story – from the events leading to the genocidal war, and Jewish life and culture to Nazi actions and life after the war. The exhibit, “Bearing Witness: A Community Remembers,” provides the first-hand accounts that help educate its visitors.

Through March 31, the Museum’s Butterfly Project – 1.5 million hand-made butterflies representing the children lost in the Holocaust – can be seen at various public spaces across the city.

Visitors will learn about the Holocaust through three primary exhibits. Our Memorial begins with propaganda and the Nazi rise to power; photos, video, mementos and more that tell the story of Nazi rule across Europe and includes examples of the hateful video and print propaganda common to the day. Photographs, films, mementos, and maps continue the story, bringing to life the 12 years of Nazi rule across Europe, and tracing the incremental steps that led to extermination in the killing fields and death camps.

Navigate the exhibits with a docent-led tour.

The nation’s only fully bilingual Holocaust Museum, and the state’s first such museum, focuses on educating the public about the Holocaust in hopes of history not repreating itself. The Museum also honors the 11 million people who died, and those who survived, the Holocaust.

The museum hosts a free commemoration ceremony at 2 p.m. on Sunday, Jan. 29 to reflect upon the dark events. Of the event, the musem states: “We bow our heads and empty our hearts for 6 million Jewish children and men and women who were murdered and the thousands of others sentenced by the Nazis as not worthy to live.”

Permanent exhibit: Visitors get to see a day in the life of the Holocaust– April 19, 1943. Events of the day included the Warsaw Ghetto uprising, the 20th deportation train from Belgium was attacked by partisans and the Bermuda Conference met. This museum states: These events illustrate wartime heroism, Jewish resistance against all odds, and government and diplomatic indifference to the fate of Europe’s Jews. They show that the decision to do the right thing—to stand up against the forces of brutality, hatred, and evil—can be made under the worst conditions. They also demonstrate that the decision to stand by and do nothing can perpetuate human suffering and cost lives.

The museum also offers the Upstander Speaker Series, such as the upcoming talk by activist and actor George Takei.

The Dallas Holocaust Museum, currently in rented space, is working to build its own state-of-the-art 50,000 square foot facility in Dallas’ West End.