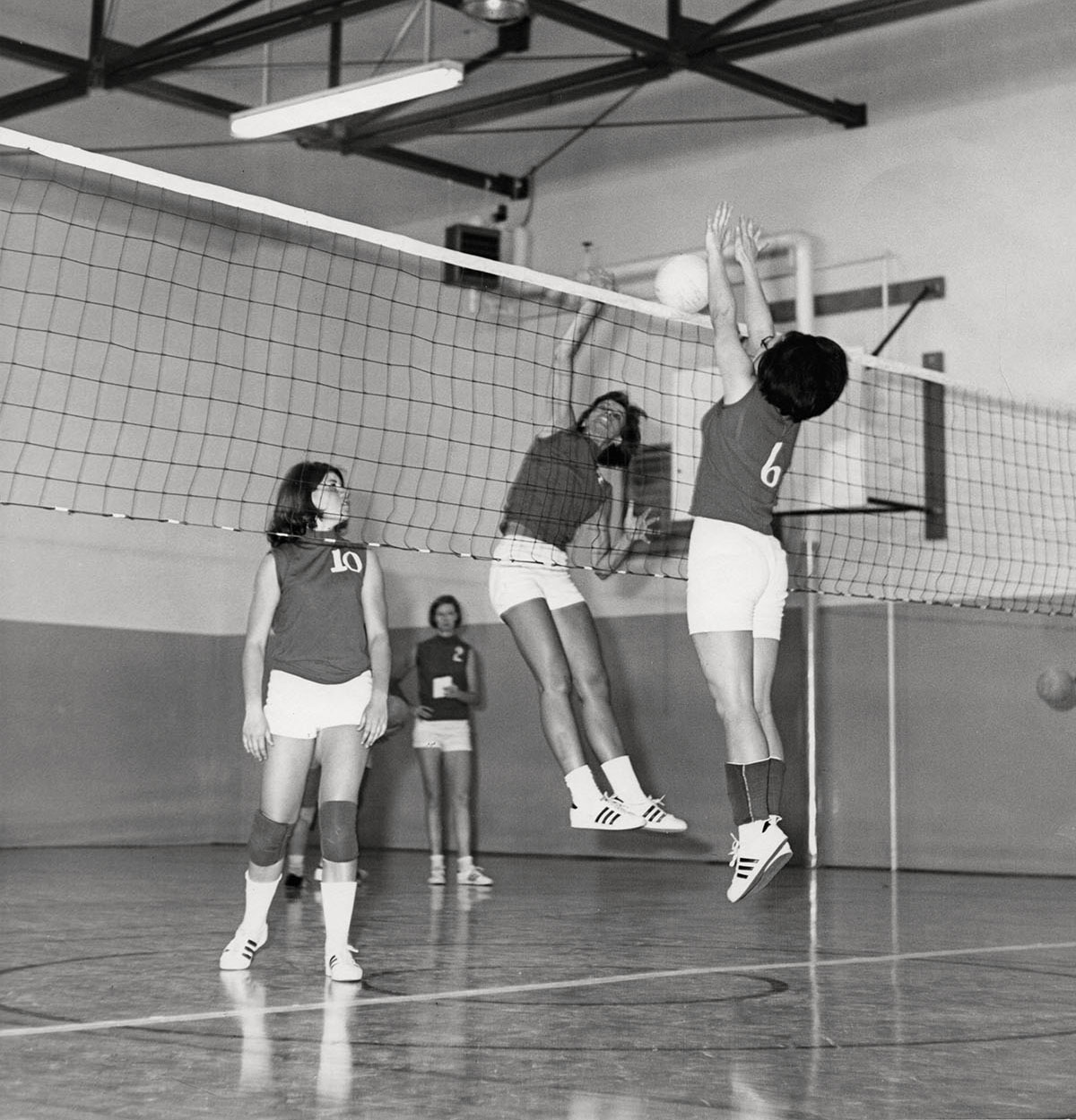 Marilyn McReavy Nolen pulled into Alpine in the summer of 1968, headed from her family’s home in the West Texas town of Big Lake to California. She was joining her Team USA volleyball teammates to get ready for the Mexico City Olympics.

She had stopped in to visit a high school friend at Sul Ross State University, then and now a school of about 2,000 students best known for its rodeo team. By the time she drove away, however, McReavy Nolen had accepted an offer to return in January as a graduate assistant in the women’s physical education department while also pursuing a master’s degree.

Mary Jo Peppler pulled into Alpine in early 1969. A volleyball coach at a Catholic school in California, Peppler was on a cross-country road trip when she stopped in to visit McReavy Nolen, her former teammate on the Olympic squad. She liked the place so much she decided to enroll as an undergraduate student.

Sul Ross had no women’s sports teams when the 24-year-old athletes arrived. But Billie Lynn, the director of the women’s PE department, saw potential. She lured in McReavy Nolen within minutes of meeting her, and upon meeting Peppler—who was on Team USA in 1964, when women’s volleyball made its Olympic debut—Lynn realized she could capitalize on having two Olympians on the West Texas campus.

Though neither of them knew it at the time, the women were setting the groundwork for Sul Ross to write a new chapter in U.S. volleyball history.

This December, the 64 best college women’s volleyball teams will gather in Columbus, Ohio, to determine the national champion. The schools almost certain to qualify include a who’s who of academic and athletic achievement, such as Stanford, Penn State, UCLA, and Texas. These teams train in top-of-the-line facilities and play for sophisticated coaches who make upward of $300,000 a year. All will fly to the tournament in comfort and wear the latest gear from top brands.

McReavy Nolen and Peppler never could’ve imagined such a thing when they drove into Alpine a little over 50 years ago. The NCAA didn’t even include women’s sports then; it wasn’t until 1972 that Congress passed the Title IX law, requiring colleges that accept federal funds to offer women’s sports programs.

Governing bodies other than the NCAA held the first women’s college volleyball championship tournaments in 1970 and 1971. And while those tournaments included juggernauts like UCLA and Oregon, the first two titles went to none other than Sul Ross, the little school in West Texas.

The story of their success was as outrageously improbable then as it is today. 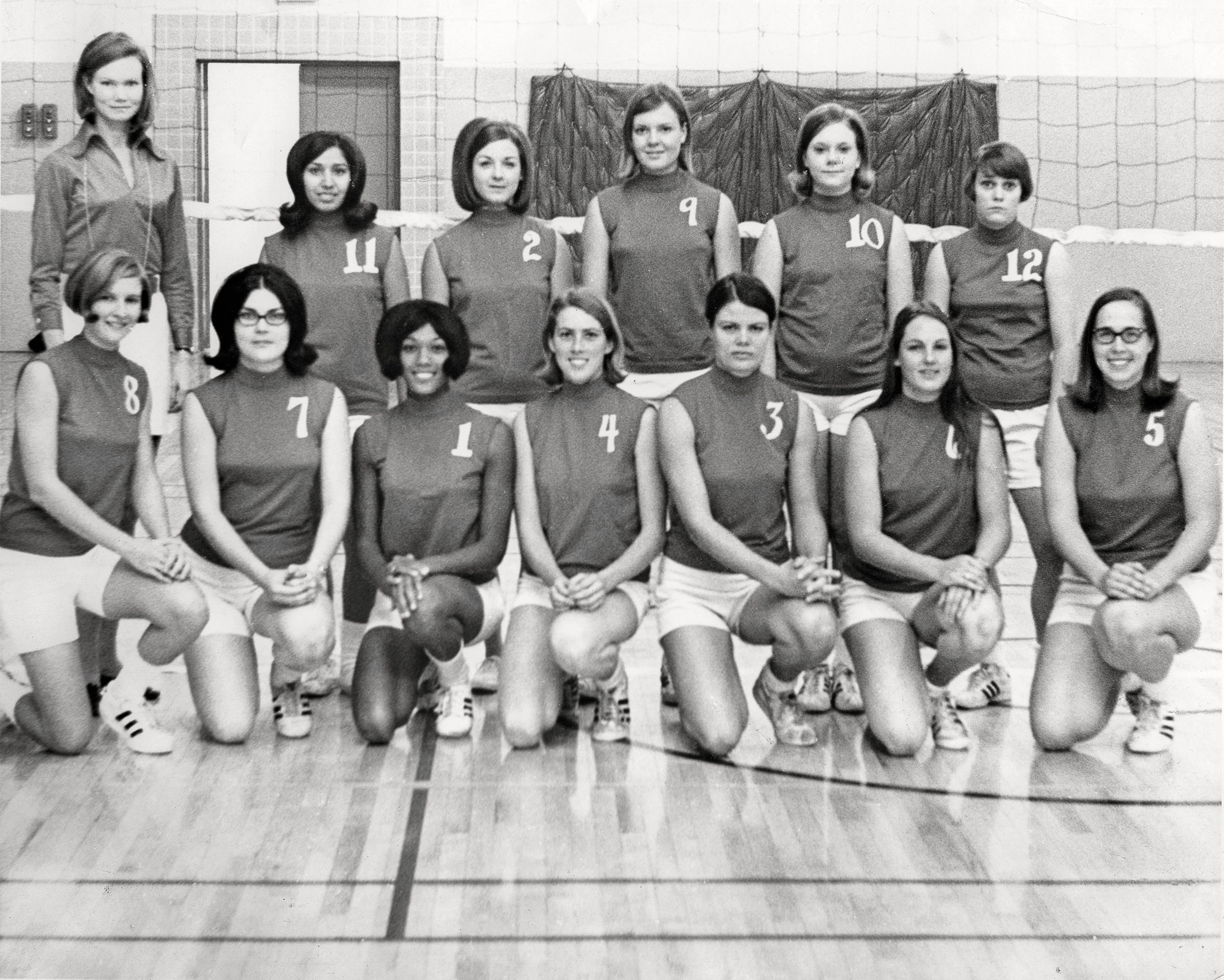 After settling in Alpine, Peppler and McReavy Nolen began playing pickup games with anyone they could find. This included freshmen Brenda Rochen Archie, who’d been an all-district player at Fort Stockton High; and Kay Whitley, who was in the tennis class McReavy Nolen taught, but hadn’t played volleyball since junior high.

The pickup squad agreed to put on a volleyball exhibition during halftime of a men’s basketball game. Lynn hyped it by declaring, “The Olympics have come to town!” At halftime, Lynn invited the guys in the bleachers to come on down—six at a time—to challenge the women. “The cowboys came out with their hats on,” Peppler told Sports Illustrated in 1975. “We killed them. We bounced balls off their heads.”

By May, Peppler and McReavy Nolen decided their crew was tournament-ready. They loaded into the Whitley family’s blue Chevrolet station wagon and headed for the U.S. Volleyball Association national championships in Knoxville, Tennessee. They ran out of gas once and spent some nights sleeping in the car and others under the stars. But they finished a respectable eighth place.

The next school year, the team’s new reputation drew several more skilled players to Alpine. Still, it’s a stretch to say anyone was recruited. “I mean, there were no scholarships,” McReavy Nolen said. “Two girls lived in Billie Lynn’s barn.”

For the 1970 and 1971 teams, McReavy Nolen served as the coach, and her mother pitched in by making their uniforms. “We had blue T-shirts and red T-shirts that said ‘Sul Ross,’” she said. “We didn’t put our names on them because we didn’t know how to sew very much. Our shorts were loose and striped, but the stripes were all different colors.”

They needed a team to scrimmage against, so McReavy Nolen and Peppler built one from the men playing in the intramural volleyball league, inviting mostly football players.

“We never, ever beat them—except for one time,” recalled Randy Wilson, then a lineman on the Sul Ross football team. “We were whooping and hollering on our way out and Mary Jo said, ‘Where are you going? We’re not through.’ She called us back, and they proceeded to pummel us.”
During one of those battles, Wilson warned a teammate not to challenge Peppler. “He smiled and said, ‘Don’t worry about it,’” Wilson said. “Then he goes up to block Mary Jo, and it was like she somehow switched hands in midair. That ball hit him square in the nose and broke it. He was flat on his back, bleeding. I said, ‘I told you!’ I thought it was funny. I don’t think he did.”

The Lobos—actually the “Loboettes” in those days—won every match in the regular season, earning the top seed at the inaugural national championship tournament held in Long Beach, California, in April 1970. The event—overseen by the Division of Girls’ and Womens’ Sports of the American Association for Health, Physical Education and Recreation—included 28 schools. Sul Ross took out San Diego State in the semifinals, followed by UCLA in the finals.

That fall, Peppler, McReavy Nolen, and fellow Lobo Jerrie McGahan were selected to play for the U.S. team in the World Volleyball Championship in Bulgaria. Although Team USA finished 11th out of 16 teams, the tournament named Peppler the “Most Outstanding Player,” unofficially making her the world’s best player. Back in West Texas, in January 1971, Sul Ross hosted a traveling team from Brazil. Some say the gym had never been as packed as it was for those two matches.

Weeks later, the Lobos capped another undefeated season with a national championship. This tournament was held in Lawrence, Kansas, under the auspices of the Association for Intercollegiate Athletics for Women. When the Sul Ross team drove back to West Texas, police cars and a fire truck were waiting on the outskirts of Alpine. Trouble? No, the start of a parade to campus.

“Any teenager loves having attention, and that’s what we got,” Rochen Archie said. “We went on the radio station. One of the jewelers gave us watches with a white band and ‘Sul Ross volleyball’ written on the face in red. We felt like heroes.”

The Lobos again qualified for the national tournament in 1972. But McReavy Nolen, Peppler, and McGahan left shortly before to focus on qualifying for the Olympics. Without their star players, Sul Ross was ousted in the quarterfinals.

The school’s program, which now competes in the NCAA’s Division III, hasn’t been as successful since, making those first two seasons even more legendary. McReavy Nolen and McGahan went on to successful Divison I coaching careers, and Peppler was inducted into the Volleyball Hall of Fame in 1990.

Despite the unpredictable set of circumstances that brought these athletes together, the team became pioneers of women’s college volleyball. It’s a title they’ll accept as long as it’s understood that they stumbled into it. Nevertheless, their legacy lives on in the girls and women who take the court at the more than 1,350 high schools and 90 colleges in Texas that field women’s volleyball teams.

“A lot of people talk about having short-term and long-term plans; we never had any of that,” McReavy Nolen said. “It all just happened.