The National Museum of the Pacific War 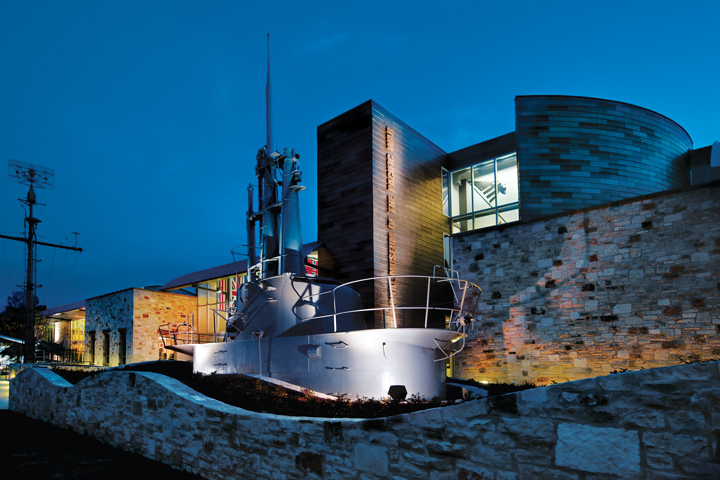 The fairwater/conning tower of the USS Pintado (SS-387) reminds museum patrons of the critical strategic role of U.S. submarine forces in the Pacific Theater. (Photo by J. Griffis Smith)

Most weekends of the year, crowds flock to Fredericksburg to enjoy the Hill Country ambiance, shop along historic Main Street, or savor impromptu wine tastings. As they wander among the shops and galleries, many visitors may inadvertently miss one of the town’s jewels: The National Museum of the Pacific War.

The National Museum of the Pacific War pays special homage to those who served the United States on December 7, 1941, at Pearl Harbor.

At 12:25 p.m., Dec. 7, 1941, the U.S. Naval Base at Pearl Harbor, Hawaii, was attacked by the Imperial Japanese Navy. More than 2,400 Americans were killed and the U.S.S. Arizona was destroyed. Until Sept. 11, 2001, it was the deadliest foreign attack on American soil. The event was dubbed a day that “will live in infamy” by President Franklin D. Roosevelt who would then declare war on Japan.

Even though the facility opened more than 25 years ago, a recent expansion elevates the museum to a national—and even international—destination. And, with this enhanced and expanded presence, the status of Fredericksburg now compares favorably with two other American small towns with nationally known museums: Gettysburg, Pennsylvania (home of Gettysburg National Military Park Museum), and Cooperstown, New York (home of the National Baseball Hall of Fame).

Twenty years ago, I was one of those tourists who had never visited what was then known as “The Nimitz Museum.” From my home in Austin, I frequently ferry out-of-town guests to Fredericksburg to show them the Hill Country and to eat German food at one of the town’s popular restaurants. I’ve had an interest in World War II history since I was a teenager, but my knowledge of the conflict in the Pacific was limited to events made famous in American cinema: Midway Island, Guadalcanal, and Iwo Jima.

I didn’t really discover the museum until Ron Mills, a WWII veteran from England, came to visit. I’d met Ron in France in 1984 when my wife, Robbie, and I traveled to Normandy to commemorate the 40th anniversary of the D-Day invasion. We met Ron at the Café Gondree, at the Pegasus Bridge, an objective of the British Glider troops on the night of June 5, 1944. It had been a busy day of touring, starting with a visit to the often-photographed cemetery at Colleville-sur-Mer above Omaha Beach, followed by an inspection of the decaying German bunkers along the coastline. We were ready to relax, and we enjoyed sharing a beer with Ron, who was at the café visiting with two other grizzled British vets. I told him that I planned to meet him again in Normandy for the 50th anniversary of the invasion.

“We want visitors to have the same uncertainty the soldiers, sailors, and pilots had of not knowing what’s going to happen next.”

After we returned to Austin and Ron flew back to England, we kept in touch. He had not visited the United States, and I was determined to change that. It took five years of persuading, but I finally convinced him to visit Austin. It seemed like an obvious plan to take him to tour the Nimitz Museum, so we drove Ron to Fredericksburg for a day trip.

At that time, the museum was entirely housed in the distinctive Nimitz Hotel building. Judging by the picturesque exterior, the museum looked like a quaint local institution that we could see in the course of a 30-minute stroll. That conclusion was wrong.

We entered the museum and soon realized the extent of the museum’s collection. Cases filled with maps, combat gear, and other items donated by veterans of WWII helped tell a chronological story of the War in the Pacific. The museum also told the story of Admiral Chester Nimitz, a native son of Fredericksburg who was asked to command the U.S. forces in the Pacific after Pearl Harbor. We lost track of time, immersed in the unexpected bounty of what was then a much smaller museum.

Ron and I got together one more time in Normandy in 1994 to commemorate the 50th anniversary of the D-Day invasion. Ron died later that year, but not before he’d been awarded a well-deserved medal from the French government.

Since that initial visit to the museum with Ron, I have returned many times. The Nimitz Hotel today still houses the Nimitz Museum, with exhibitions installed three years ago focusing on the story of Fleet Admiral Chester W. Nimitz, his family, and their early history in Fredericksburg. Most of the WWII artifacts have been moved from the hotel to the George H.W. Bush Gallery, one block off Main Street, behind the hotel. The Gallery opened on June 11, 1999, with the newly renovated and expanded Gallery dedicated on December 7, 2009, in a ceremony featuring George H.W. and Barbara Bush; Governor Rick Perry; U.S. Congressman Mike Conaway; General James T. Conway, USMC (Commandant of the Marine Corps); General Mike Hagee, USMC retired (president and CEO of the Admiral Nimitz Foundation); and Jon T. Hansen, Chairman of the Texas Historical Commission. 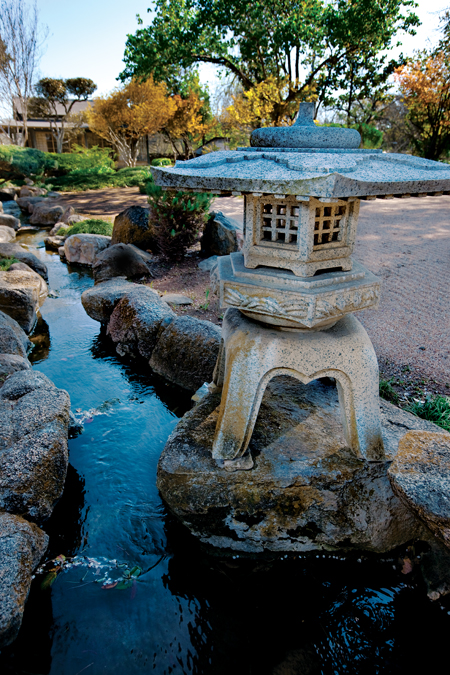 The Japanese Garden of Peace was donated to the museum by the people of Japan. (Photo by J. Griffis Smith)

With the museum now doubled in size, I find myself with many options: Do I push on with the Marines on Saipan, or do I head over to see how the Brits are doing in Burma? Tom Vortmann, the museum’s director of marketing and public relations, explains that this was intentional. “We want visitors to have the same uncertainty the soldiers, sailors, and pilots had of not knowing what’s going to happen next,” he says. Just as Admiral Nimitz conducted an island-hopping campaign across the Pacific, the museum consists of exhibits that seem like islands you can hop between. Fortunately, you won’t have to deal with hostile forces or endure mosquitoes and Army rations.

My most recent visit in December to the newly expanded complex revealed impressive changes. As with the old museum, the story of the Pacific War begins with Japan’s rise to power in the late-19th and early-20th centuries. Large photomural and text panels tell the compelling chronological story of the Allied military’s advance toward victory over Japan, while a series of “home front” exhibits details the effect of the war on Texas and the nation. In each room, personal letters, newspaper articles, and mementos illustrate the lives of those who served to support the war effort, and of those who fought and died in the conflict. The narrative concludes with Japan’s surrender on September 2, 1945, to the Allied powers aboard the Battleship USS Missouri. The exhibition concludes with a focus on the prisoners of war, the Japanese war crimes trials, the massive military and civilian casualties on both sides, and the heroes—the recipients of the Medal of Honor in the Pacific Theater of WWII.

The story of the war comes vividly to life through expanded interactive displays, which were developed for the museum by a firm that specializes in computer games. Very few exhibits in the new gallery do not have video and computer interactivity designed to appeal to younger visitors. If you want to learn more about the Battle of Guadalcanal, you can watch the battle unfold on an LCD screen that shows a map of the island. A narrator guides you through the battle as the screen displays the movements of the opposing land and naval forces as they fight to gain control of Guadalcanal and its strategic airfield.

The Bush Gallery features one of the museum’s most compelling artifacts: a Japanese midget submarine. The diminutive war sub is the focal point of a multimedia presentation describing the Pearl Harbor attack on December 7, 1941. You step into a long room with the submarine before you, along with written information about its role and that of four sister midget subs. The room darkens as you hear and see (on the wall) some explosive depth charges, as if a destroyer is attacking the sub. Next, on the wall above the submarine, a display of photos and videos recount the attack on Pearl Harbor, along with the accompanying sounds of the aerial bombardment.

The Bush Gallery contains many display cases with weapons, uniforms, and personal effects of the men who fought on both sides, and these are accompanied by some items you might not expect, including a B-25 Mitchell bomber (like the one used in the Doolittle Raid on Japan in 1942), a Stuart M-3 tank, and the wreckage of a Japanese Val dive bomber. The Stuart tank took a direct hit to its front armor just below the gun turret. On a video, Sgt. Jack Lattimore recalls his experience of having this very tank knocked out during an attack on Japanese positions in 1942’s Battle of Buna in New Guinea. Just a few feet away, the gun that disabled Lattimore’s tank is on display.

Once you’ve seen the artifacts of war in the Bush Gallery, you can walk two blocks to the Pacific Combat Zone for a guided tour of additional World War II equipment in a more life-like setting. Part of the PCZ is outdoors and re-creates a Japanese defensive position equipped with a tank and artillery. Several weekends a year, the Pacific Combat Zone stages 75-minute reenactments of a U.S. assault on a Japanese-held island. You can witness a dramatic portrayal by reenactors in vintage combat gear representing both American and Japanese troops. Don’t get too close to the flamethrower! 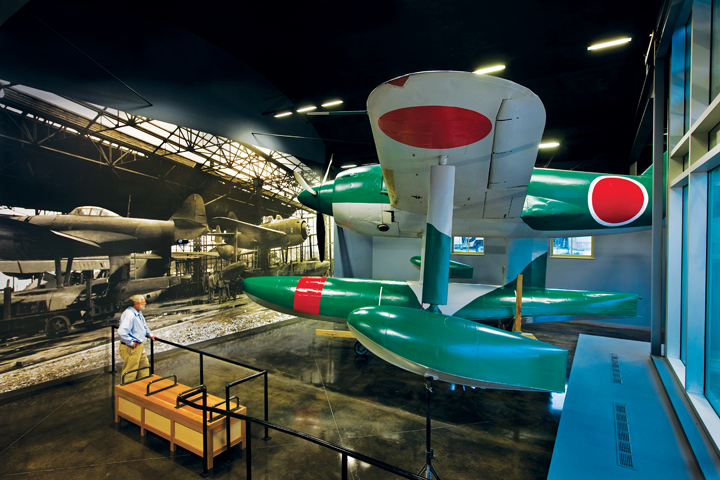 Twenty years have passed since my first visit to the Nimitz Museum with my friend Ron Mills. As I walk through the Bush Gallery in December of 2009, I think about Ron. I know he would enjoy the expanded museum, and would appreciate the effort made by so many people to document the history of the war, honor those who served, and remind visitors—particularly younger generations—of the heavy cost of war.