Written by Tyson Bird, Photographs by Will van Overbeek | From the March 2020 issue | Updated: February 24, 2020 | Filed Under: History 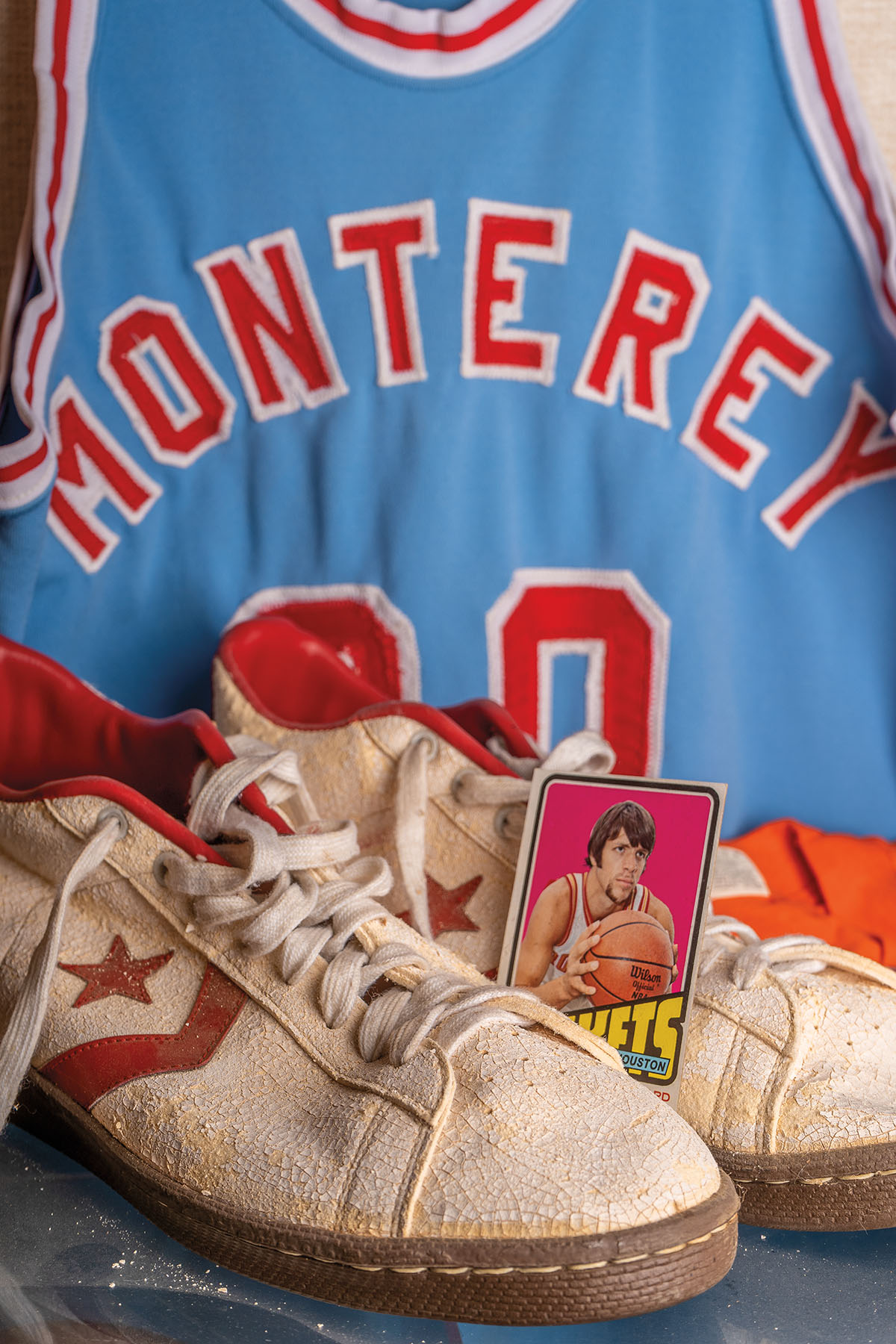 A tasty kolache at Weikel’s Bakery. A porcelain flower vase at an antiques shop. Bluebonnets poking through the blackland soil after an early-spring rain. Oh, and a signed, size 23 Reebok basketball shoe once worn by NBA Hall of Famer Shaquille O’Neal.

Find all of these in Carmine (pronounced “Car-mean”), a town of about 250 that straddles the Fayette and Washington county lines along US 290. Patches of wildflowers, vintage finds, and Czech pastries have long drawn visitors seeking to stretch their legs midway on the drive between Houston and Austin. But the Texas Basketball Museum, opened in 2009, also offers travelers good reason to linger, especially as the NCAA tournament, or March Madness, commences March 17. 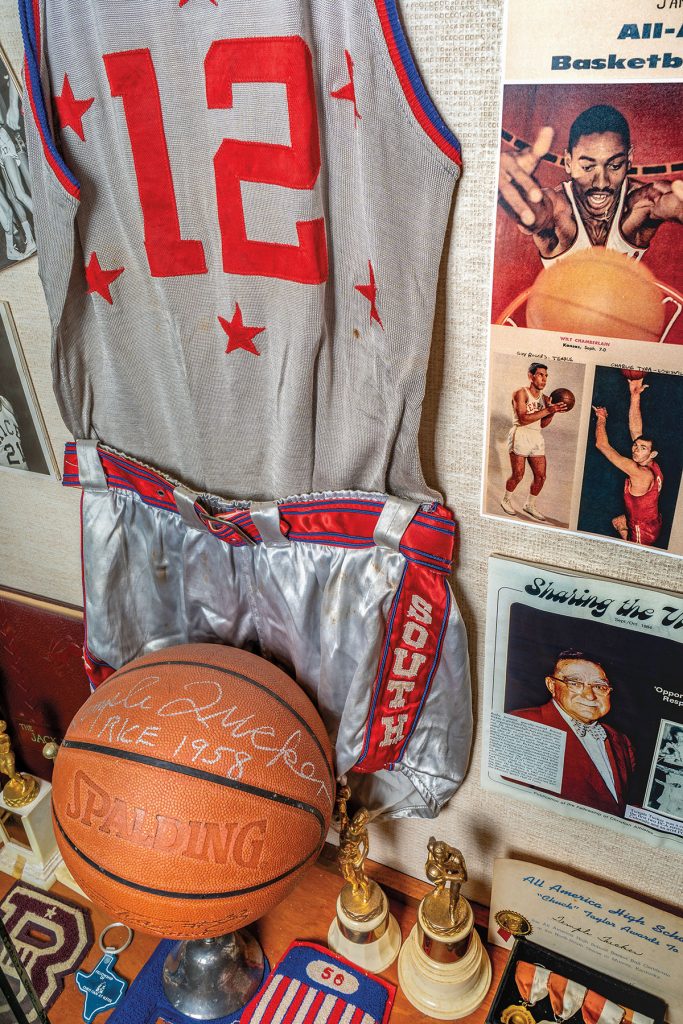 A ball signed by Temple Tucker

Bob Springer, former publisher of Texas Basketball magazine, founded the museum to trace the state’s hoops history, from high school to the pros. Knickknacks and memorabilia are crammed inside the approximately 1,400-square-foot space. Many of the pieces in the collection have backstories Springer is eager to share. Take the giant sneaker donned by O’Neal, a military brat who landed in San Antonio in the 1980s and helped Cole High School win a state championship in 1989.

Springer once gave O’Neal some good publicity about one of his business ventures in Texas Basketball shortly after O’Neal began his NBA career in 1992. A few years later, at the Texas state basketball tournament, Springer approached O’Neal, a spectator at the tourney, about acquiring a shoe for the museum. Springer knew it would draw plenty of interest because O’Neal is beloved by fans. But the 7-foot-1 O’Neal, who is undoubtedly inundated with such requests, shrugged off the plea much like he would an undersized defender.

“That was disappointing,” Springer says. “I mean, he’s one of the great basketball players to come out of Texas. And the kids that visit would love to see the size of that shoe.”

But Springer, an intrepid scavenger who for three decades has owned Stoney Creek Antiques next door to his museum, doesn’t give up easily. He finally scored one of O’Neal’s shoes in a familiar way: browsing through an antiques mall while on a business trip to Austin.

“There it was, sitting on a shelf,” he says, with a grin. “I knew I’d eventually get one.” 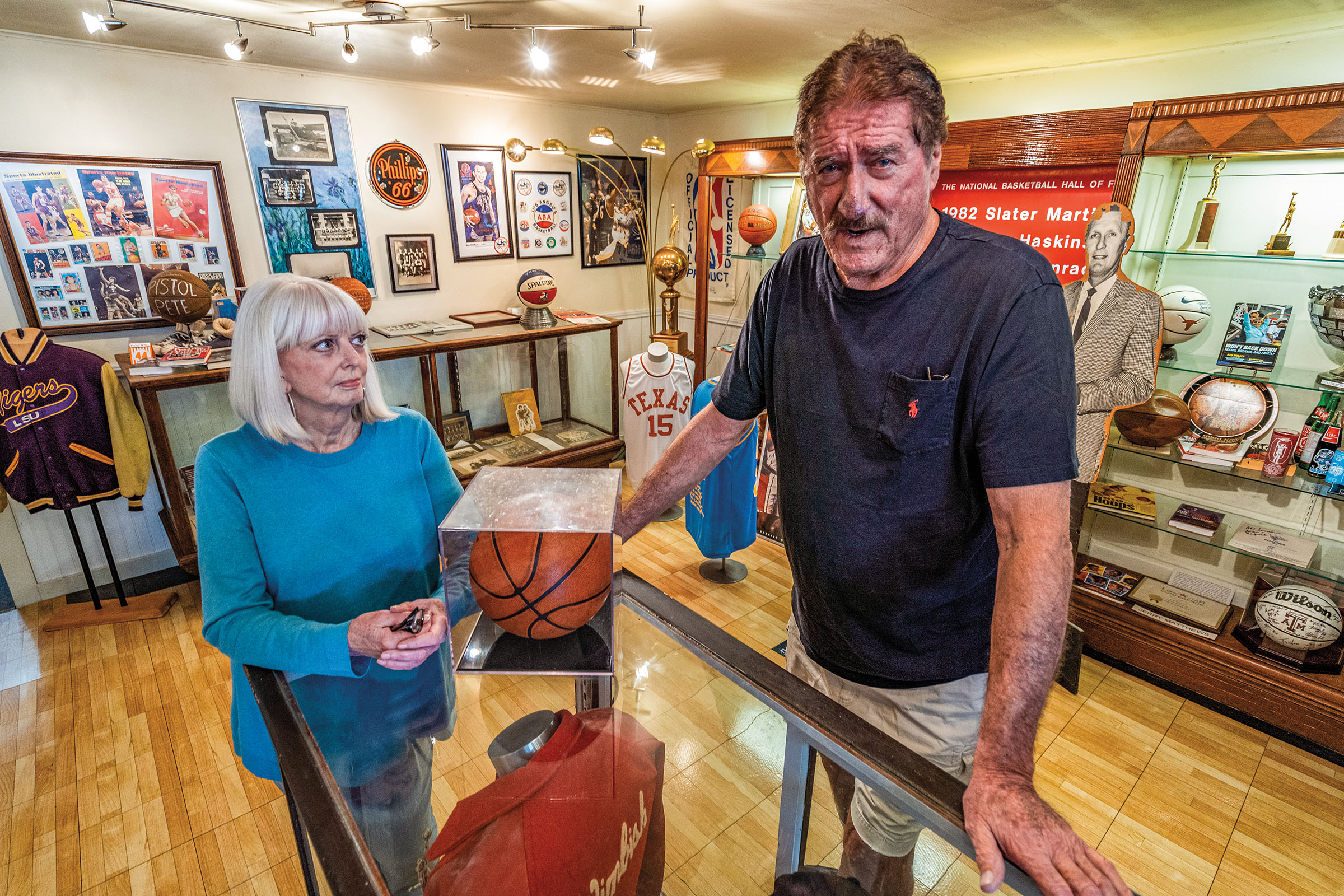 Bob Springer and his wife, Karen Springer, at the museum 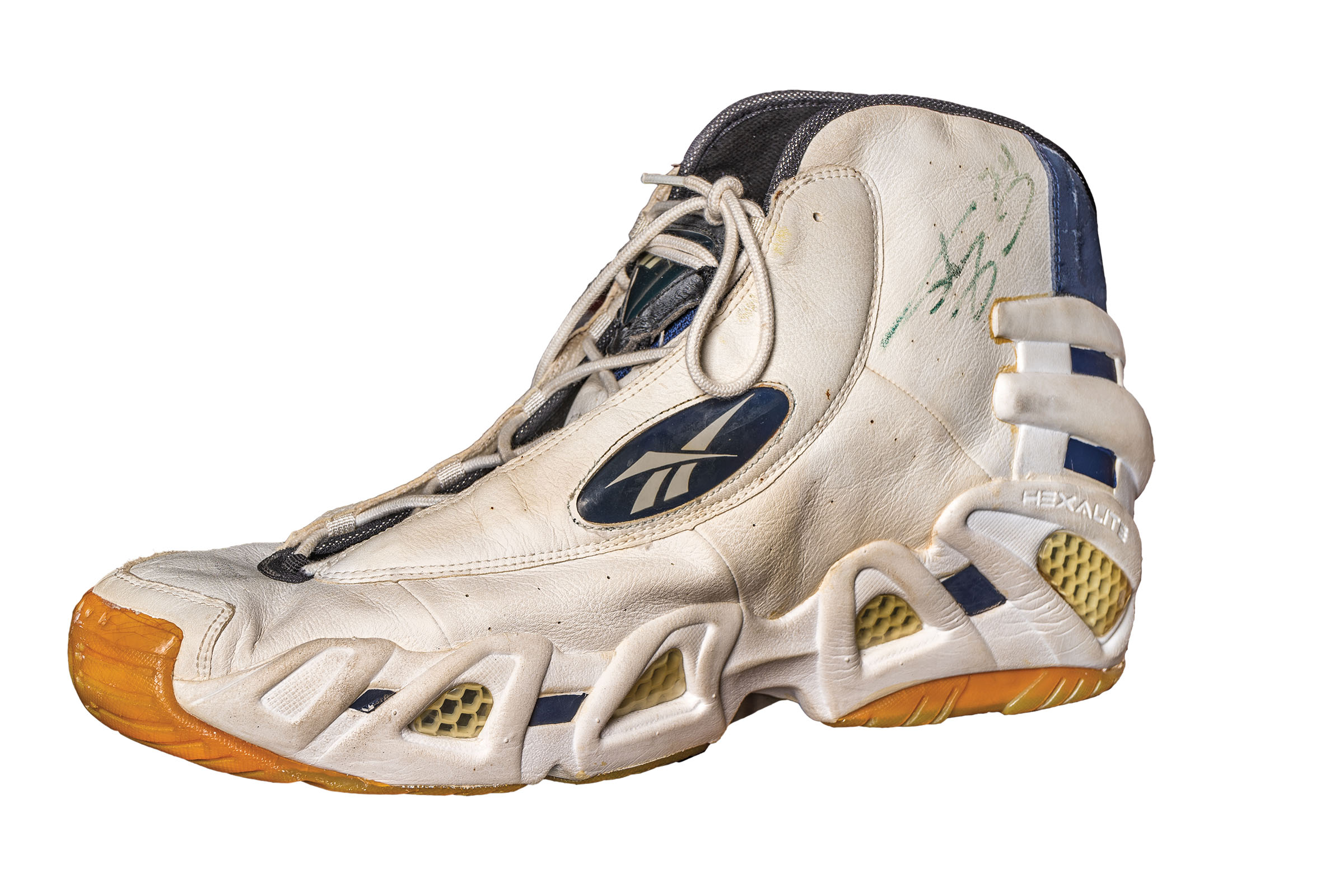 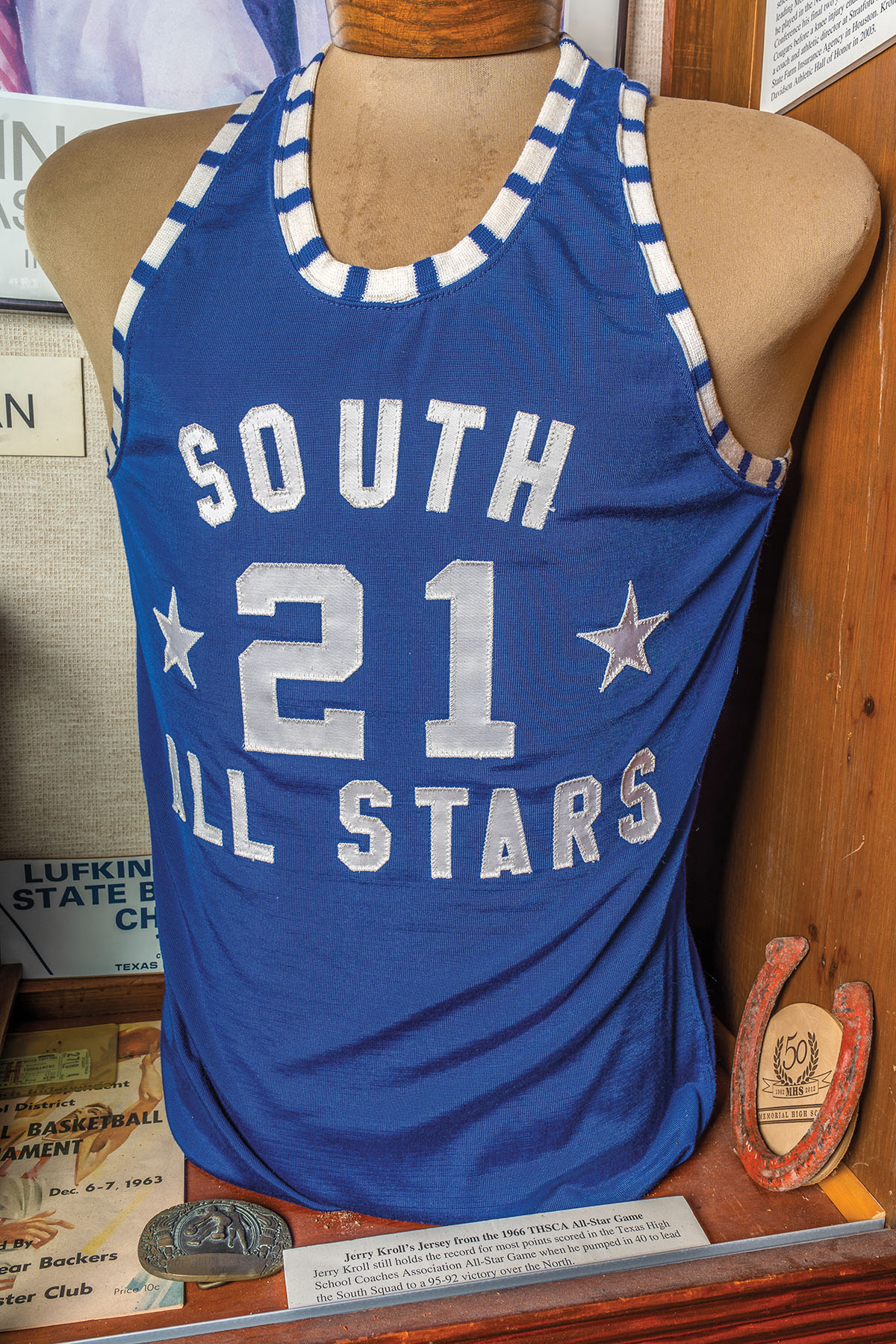 That shoe is prominently displayed alongside a trophy commemorating Snook’s 1966 undefeated season, in which the high school team from the Brazos Valley capped a streak of 90 consecutive wins—a state record. The room is lined with photos of legendary Texas high school coaches such as Granbury’s Leta Andrews, who retired in 2014 after 52 years on the bench with 1,416 wins—more than any high school coach in U.S. history. There’s also a photo of Fort Worth Dunbar’s Robert Hughes, who retired after 47 years in 2005 as the all-time winningest high school boys basketball coach, with 1,333 wins.

“The museum really exposed my players to the great history that our state has when it comes to basketball.”

Springer describes himself as “kind of a shy kid” who spent more time in the school’s band than on a basketball court. But he grew to stand 6 feet, 8 inches, so basketball coaches flocked to him. He played at Howard Payne University in Brownwood before dabbling in professional basketball. Later, he spent three decades coaching high school hoops in the Houston area.

“Basketball has always been my livelihood and my love,” he says. “I just always liked holding on to things that seemed important or interesting, and it just seemed natural to hold on to all these items.”

He stops and motions to the jerseys, trophies, photos, and other collectibles filling the museum. “All this, this is my way of sharing that.”

There’s plenty to share from a state with a rich hoops legacy that is often overshadowed by football. High school jerseys from former NBA stars Spud Webb and Rashard Lewis. A jersey from Sheryl Swoopes, a 4-time WNBA champion. Basketballs signed by Red Auerbach and other Hall of Fame coaches. Whistles. Charms. Basketball-related toys and games from before World War II. Leather knee pads. A brief history of the roughneck semi-pro teams sponsored by Texaco and Phillips 66.

The collection also highlights the state’s impact on March Madness. Larry Johnson, a Dallas native, helped the University of Nevada, Las Vegas, win the NCAA championship in 1990. Clyde “The Glide” Drexler, from Houston, helped power the University of Houston to three consecutive NCAA Final Fours from 1982 to ’84.

“It’s a heck of a treasure trove for basketball people like myself,” says Blake Brown, a Dimmitt native and longtime basketball coach in Texas who is working on a book chronicling the state’s most historic basketball gyms. “The next opportunity I get, I’m going to take my players back there.” 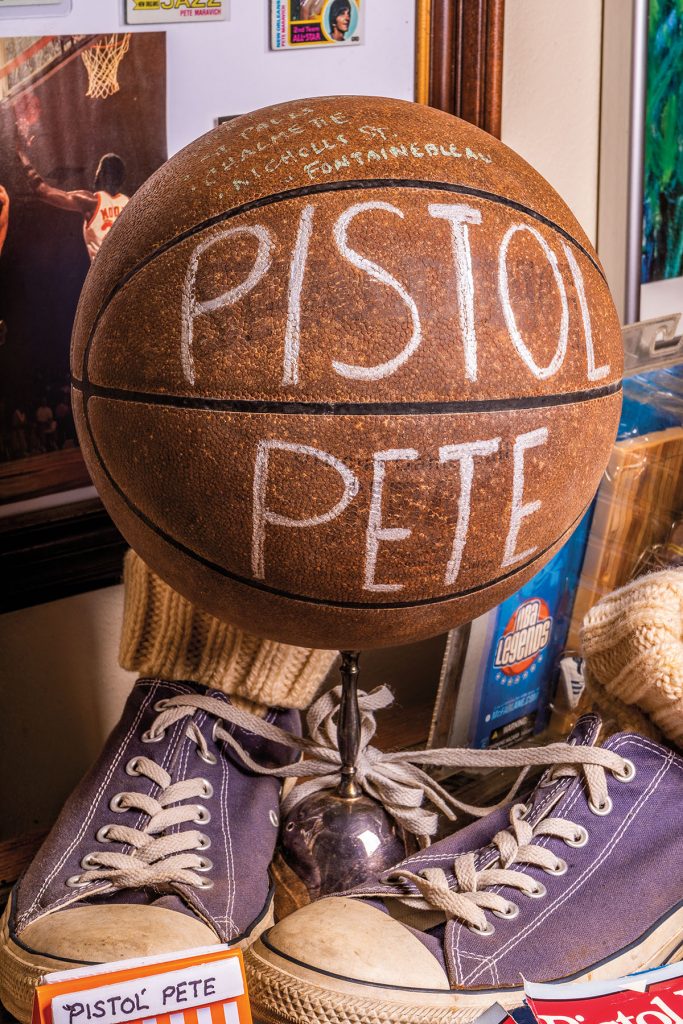 A ball honoring “Pistol” Pete Maravich, a favorite of Springer’s.

Brown has coached at Cedar Park High School outside of Austin for the past 16 years. He first stopped at the museum with his team en route to a playoff game in Houston in 2015. Incidentally, one of his star players on that squad, Trey Knight, is the nephew of former NBA player LaBradford Smith, who is also a native Texan. Knight didn’t fully understand the impact that his uncle had made on the game, and Brown said having Smith’s jersey from Bay City High School on display put some family achievement in context.

“That was special,” Brown says. “That visit really exposed my players to the great history that our state has when it comes to basketball.”

Springer initially housed his collection in the Texas Sports Hall of Fame in Waco, but he decided to take his shot at a stand-alone museum when there was the opportunity to buy a former butane-distribution business next door to his antiques shop.

Springer says he gets about 350 visitors a year. He points to a sign on the door with his phone number and a note that says he lives three blocks away with Karen, his wife of 53 years. The sign reads: “Call anytime.”

“Day or night,” Springer says. “I love to come here and show people around and talk basketball. It’s all about sharing what you have.”