Written by Art Williams, Photographs by Kevin Stillman | From the May 2015 issue | Updated: April 12, 2015 | Filed Under: Culturedetour 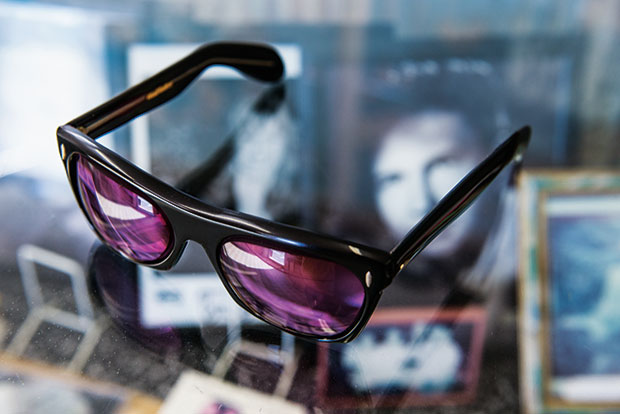 It’s not likely that many people stumble on Wink. the tiny Permian Basin town (population 940) is indeed “the middle of nowhere, 500 miles from everywhere,” as Roy Orbison, Wink’s most famous son, once said.

Despite its remote location approximately 50 miles west of Odessa, Wink draws visitors from as far afield as Egypt and Australia. They make the trek to Wink to honor Orbison, the black-clad crooner responsible for hits including “Oh, Pretty Woman” and “Only the Lonely.”

Born in 1936 in Vernon, Orbison and his family moved west to Wink in 1946. As a young man, Orbison was teased for his thick glasses and lack of football skills. In the decades since, however, the residents of Wink have more than made up for it by honoring Orbison every way they can. Around town, bright orange benches feature an image of those now-famous glasses and proclaim Wink as “Home of Roy Orbison.” A historical plaque marks the empty lot where Orbison’s family home once stood. There’s an Orbison Avenue right in the center of town. And most years in June, the town hosts a Roy Orbison festival with events like a Pretty Woman Pageant and a concert (plans for a 2015 festival were tentative as of press time).

Wink’s main draw is the Roy Orbison Museum, a one-room celebration of everything Orbison, where you’ll find photographs, posters, guitar picks, and all sorts of memorabilia evoking Orbison’s time in Wink and beyond. Given Wink’s remoteness, odds are you’ll have the Orbison Museum to yourself. All the better to explore the museum’s small collection, such as a display case with copies of the Wink High School yearbook from the early 1950s, when Orbison was a student. In his class photograph, Orbison beams out an earnest grin; in his senior quote, he proclaims his desire to lead a Western band and “marry a beautiful dish.”

Back then, Orbison played in a country band with a handful of classmates; their name, the Wink Westerners, was coined by one of their high school teachers. The museum includes photographs of the Wink Westerners, as well as of the West Texas honky-tonks where Orbison cut his teeth playing rockabilly and country standards. Orbison had not yet adopted his signature costume of black clothes and sunglasses. Indeed, he hardly looked like a rock star at all. There’s no indication that within a decade, he’d become one of the most famous musicians in the country, with more than two dozen Top 40 hits to his name.

The many photographs on the museum’s walls trace Orbison’s rise to fame. After graduating from high school in 1954, Orbison attended college intermittently in Denton and Odessa as he honed his musical style with bands including the Wink Westerners and The Teen Kings. Orbison had short-term deals with Sun Records and RCA Victor in the late 1950s before signing with Monument Records in 1959, setting the stage for a remarkable four-year run. With songs like “Only the Lonely,” “Crying,” “Dream Baby,” and “Love Hurts,” Orbison showcased his three-octave voice and his uncanny ability to channel deep emotions in a three-minute pop song. Many of these early 45s and LPs are displayed in an open case at the museum, ready for you to flip through and admire their vintage cover art—though, alas, there is no record player available to listen to them. The collection even includes an original pair of Orbison’s iconic prescription Ray Ban sunglasses, which were donated to the museum by the singer’s second wife, Barbara, after he died of a heart attack in 1988 at age 52.

If you don’t know all the Orbison lore, take the time to brush up before you visit the museum—it’ll make the objects all the more poignant.

All the LPs, posters, books, cassettes, and videos devoted to Orbison might lead you to believe that he was wildly successful throughout his entire life. In fact, after touring with the likes of the Beatles in 1963 and the Beach Boys in 1964, Orbison found his music falling out of favor, perceived as outdated. Then he was hit by a series of tragedies: In 1966, his first wife, Claudette, died in a motorcycle accident; two years later, while he was on tour in England, his Nashville-area home burned down. Two of his three sons were killed in the fire. (He later had two more sons with Barbara.)

It wasn’t until the final decade of his life that Orbison began to be rediscovered, thanks to famous fans like Bruce Springsteen and David Lynch, who featured Orbison’s song “In Dreams” in his 1986 film Blue Velvet. Van Halen scored a hit with its version of “Oh, Pretty Woman” in 1982, and in 1987, Orbison was inducted into the Rock and Roll Hall of Fame. The Orbison Museum has only a handful of artifacts pertaining to Orbison’s return to the charts as a member of the Traveling Wilburys, the supergroup he formed with Tom Petty, George Harrison, Bob Dylan, and Jeff Lynne, in the months before his death.

The Roy Orbison Museum lacks explanatory signs to walk curious visitors through this history, though your docent will answer questions and offer up Orbison anecdotes if you ask. Perhaps if you make it to the museum, you’re already a fan—and you probably already know the story. If you don’t know all the Orbison lore, take the time to brush up before you visit the museum—it’ll make the objects all the more poignant.

In the end, though, this small, remote museum isn’t just a monument to Orbison; it’s also a testament to Wink’s longstanding pride and affection for a man who often felt like a misfit.