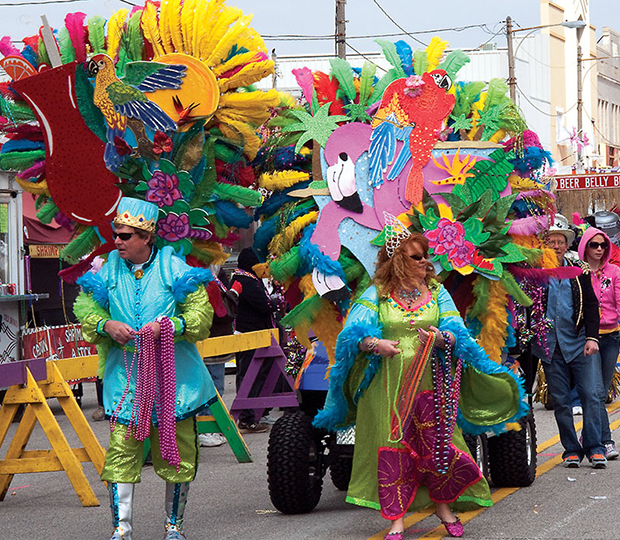 On the eve of Lent, Mardi Gras is a moment of indulgence. Food, drink, and family are at the core of Fat Tuesday. Bayou transplants in Texas and anyone else who seeks to take part in the kickoff to a new year.

Find out where to celebrate Mardi Gras in Texas this year.

On the eve of Lent, Mardi Gras is a moment of indulgence. Food, drink, and family are at the core of Fat Tuesday. Nothing in Texas boasts the grandeur of the New Orleans Mardi Gras extravaganza, but the Cajun presence in Southeast Texas ensures Mardi Gras is a highlight of the event calendar.

Port Arthur’s celebration is known around the region as perhaps the biggest family reunion in the state because attendees who have grown up, moved away, and made their own traditions, eventually return home to Port Arthur for the February festivities. Southeast Texas Mardi Gras expects as many as 200,000 people along the parade route this year.

Laura Childress, president of the nonprofit behind the event, said the organization makes a point of promoting racial harmony by promoting Cajun influences along with the cultures of people in the community.

“A lot of people are coming home, and they make their family plans around the event,” says Childress. “Some of these kids that attended are now adults that attend with their kids. It seems to just keep growing from generation to generation.”

Every year, more than 350,000 people make the journey to the island for the festivities, making it the third-largest Mardi Gras celebration in the country. In addition to the parades, the weekend is full of marathons, carnivals, and competitions. And if you don’t find a krewe that suits you, you can assemble your own. You can catch beads at the street level at night, or pay extra to observe the mayhem at the balcony level.

“If you do each one, it’s like the different layers of Mardi Gras Galveston, and they’re all great and they all have a place,” says Galveston Island Convention and Visitors Bureau’s Ivette Wilhelm. “The music’s great, the food’s great, the parades are fun. I love tossing beads, and I love catching beads. You can make what you want of it. You can certainly do it all, even if you have a family with young kids.”