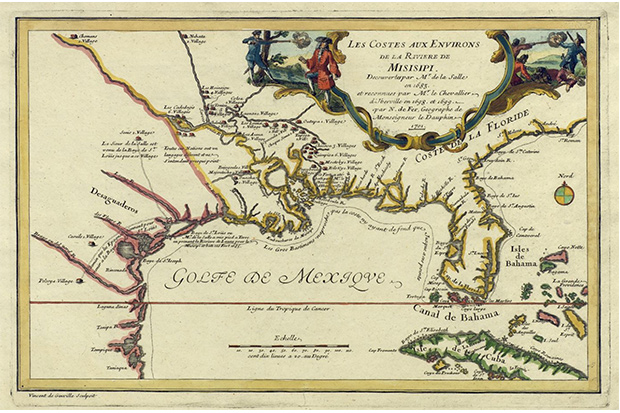 The oldest map in the exhibit is this 1701 map by French court cartographer Nicolas de Fer. It depicts French explorer Sieur de La Salle’s expedition in search of the mouth of the Mississippi River in 1685. It is one of the earliest detailed depictions of the Texas coastline.

Wherever life has flourished across the vast territory of Texas, someone early on blazed a trail to get there. A new exhibit at The Witte Museum in San Antonio—Connecting Texas: 300 Years of Rails, Trails, and Roads—illustrates through a collection of more than 40 historic maps how people journeyed across Texas over the ages and laid the groundwork for the state as we know it today.

The exhibit, which opened Feb. 15 and runs through Sept. 17, features artifacts ranging from an original 1701 map of Frenchmen Sieur de La Salle’s ill-fated 1685 expedition along the Texas coast to a 1968 Rand McNally & Co. map showing routes to San Antonio for the HemisFair World’s Fair. In between are dozens of vintage maps depicting such historical chapters as early 19th century Native American trails; frontier military trails and forts; German immigrant Hill Country maps of the 1840s; new railroads stretching westward into Texas in the 1850s; and cattle drive trails of the 1880s.

“The goal is to show how different generations and different groups have collaborated to put the together the transportation network that we know today,” says James Harkins, a curator of the exhibit and director of public services for the Texas General Land Office Archives. “We wanted to show how people moved around Texas through time, and hence connected Texas.”

The exhibit draws primarily from the General Land Office’s archive of 45,000 maps, with a few private holdings also in the mix. 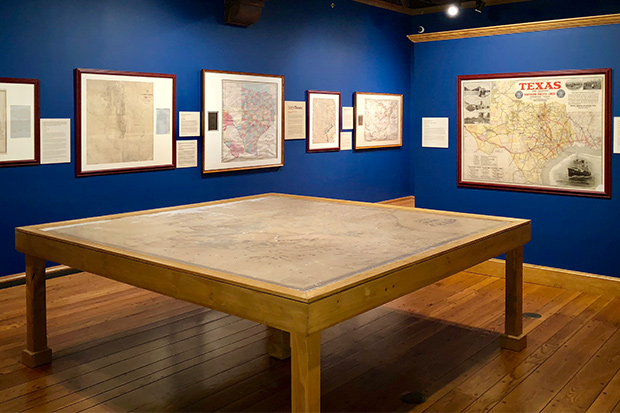 Bruce Shackelford, Texas history curator for The Witte Museum, says the maps in the exhibit document how Texas became part of the Western world.

“All of history is written as the United States went east to west, but down here we know that earlier it went south to north, and I think these maps show a lot of that,” he says. “It shows how people saw the past, how people saw themselves and where they were in this location in North America.”

o Stephen F. Austin’s 1830 Map of Texas and Adjoining States, which the impresario created of his colony both to describe for the Mexican government its Texas holdings and to lure American settlers to his settlement.

o A reproduction of an 1841 sketch of Col. Gordon Cooke’s military road from Austin to Fort Inglish on the Red River (near present-day Bonham).

o An 1838 map showing blocks of Texas land grants and the Native American trading and raiding routes that bisected them.

o An 1884 U.S. Treasury Department map titled Range and Ranch Cattle Area of the United States showing cattle-droving trails and railroads during the height of the Western cattle economy from the Texas Gulf Coast across the Rocky Mountains and Great Plains into Canada.

Witte Museum President and CEO Marise McDermott says Connecting Texas fits perfectly with the museum’s focus on the San Antonio Tricentennial, a milestone the city is celebrating throughout 2018.

“Early Texas trails brought people and culture into contact and conflict, and that seems to be the theme that we’re dealing with all the time when we talk about the Tricentennial: conflict and contact, and then confluence,” she says. “This exhibition highlights the complexity of the pathways that symbolize the many cultures that found a place in the land we now call Texas, and is another way to reflect on the past 300 years of San Antonio’s history.”