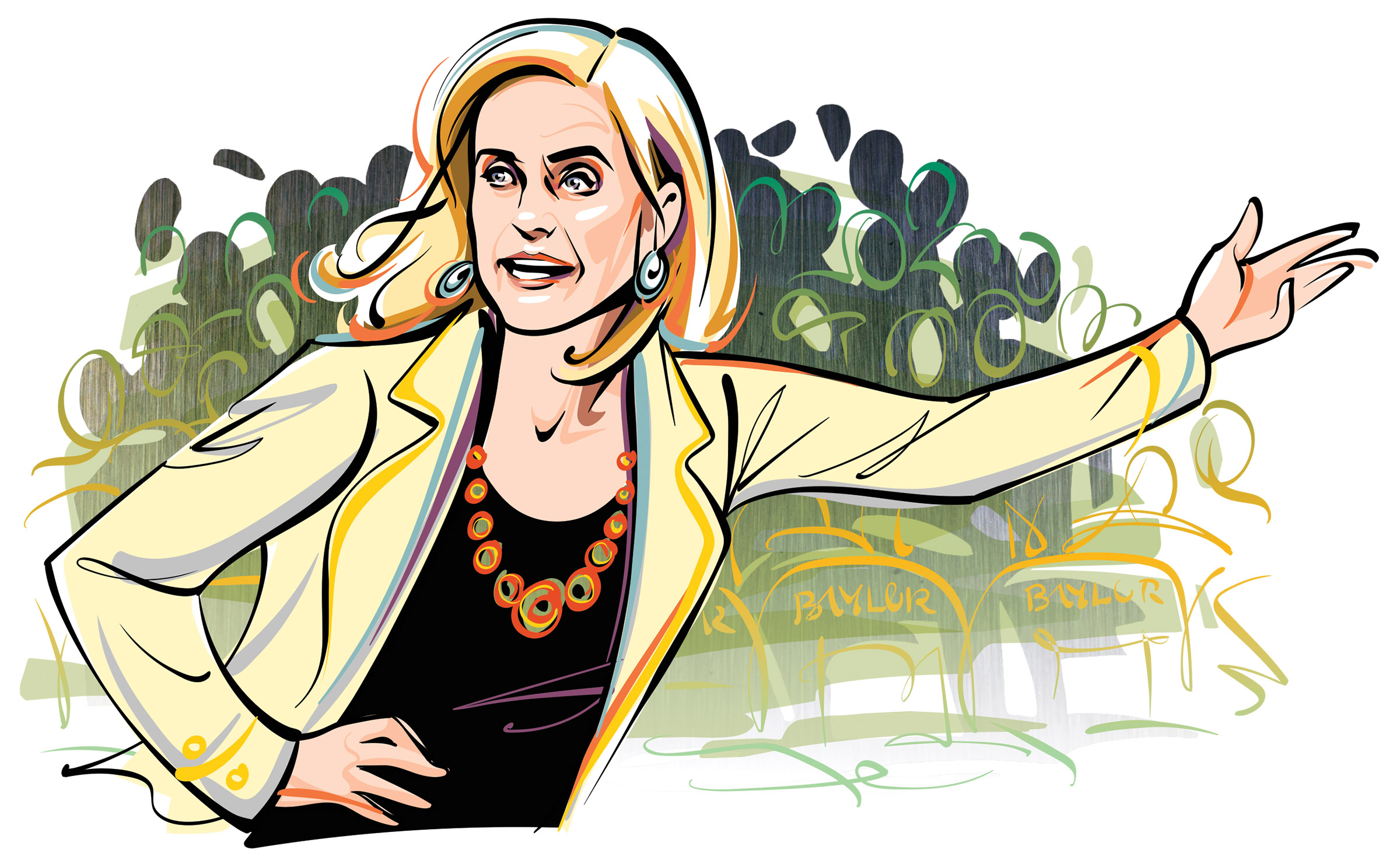 Kim Mulkey has been a dominating figure in women’s college basketball since before many of the players she coaches at Baylor University were born.

A native of Tickfaw, Louisiana, Mulkey was the starting point guard on Louisiana Tech University’s team that won back-to-back national titles in 1981 and ’82. As an assistant coach at her alma mater, she helped the Lady Techsters win another championship in 1988. But Mulkey has made her biggest impression as head coach of the Baylor Lady Bears, winning national titles in 2005, 2012, and 2019.

With teams known for defensive tenacity and strong post play, Mulkey followed the 2019 title by notching her 600th win as a head coach in February. At age 58, she reached that mark faster than any other NCAA Division I coach—woman or man.

The Lady Bears won their 10th straight Big 12 championship in 2020 and were preparing for another run at the national title when COVID-19 shut down the sports world last spring. Despite the truncated season, Mulkey got some good news in April when she was elected to the Naismith Memorial Basketball Hall of Fame. The induction ceremony in Uncasville, Connecticut—postponed to May 2021—will feature Mulkey alongside a star-studded class including Kobe Bryant and Tim Duncan.

Away from the court, Mulkey enjoys working in her yard and spending time with her two adult children and her grandson. Her daughter, Makenzie Fuller, played at Baylor and is now the program’s associate director of operations. Mulkey says she puts a premium on family, even with the pressures of an elite coaching job. “I tell my kids, ‘When y’all are looking at me in that casket, you can’t say, ‘Mom put her career ahead of us.’”

When her Lady Bears won the championship in 2005, Mulkey became the first person to win a college basketball national crown as a player, assistant coach, and head coach. “I’ve been very fortunate,” Mulkey says. “I played at one place, and I had the opportunity to coach at two. But I’ve only coached as a head coach at one institution, and that’s Baylor.”

Q: Do you view yourself as a transplanted Louisianan or adopted Texan?
A: I don’t know that there’s much difference. I’m a Louisiana girl and always will be. I’ve been in Texas 20 years, and so I consider Texas my home, and my kids were raised here. Nonetheless, 38 years of my life were spent in Louisiana. Home is wherever I am, and my home is in Waco.

Q: What are some of the biggest changes you’ve see in Waco in 20 years here?
A: I’ll start with Baylor. University Parks Drive—I don’t even recognize University Parks Drive. There’s just so much development, so many new buildings, not even to talk about the new [football] stadium on campus. Just to watch the development all over Waco and how it has grown and the downtown area and the suburbs, the places outside of the downtown area. Everything is just hopping around Waco in the last 20 years.

Q: Has Waco’s growth made it easier to recruit players to come here?
A: I don’t think the town was a negative or a positive when I got here 20 years ago. I think what we had to fix was winning. We had to move from the bottom to become a competitive team. Education at Baylor sold itself. Never ever have we had to sell a quality degree from Baylor. I think location has always been a positive. You’re centrally located in the middle of the state. What we had to do was change the perception of whether Baylor was committed to an elite program. We had joined a Power Five conference. When we started winning, we changed that perception.

Q: How important is recruiting players from Texas, a state known for good high school basketball?
A: Geographically, I mean just look at our state, how large we are. It takes 11 hours to get from one side of the state to the other side of the state. Just imagine all the kids that play basketball. We’re going to continue to recruit the state. We’ll get some of those kids, and we’ll lose some of those kids just because there are so many good programs in our state.

Q: You joke with the media about singing old-school country songs a lot. Is that a big interest of yours?
A: I never liked country music growing up, but it’s what I heard from my family. I would tune it out because I was either studying or playing ball. And then as I got older, and I would be on the road recruiting, driving late at night and just searching on the radio, I would listen to a song and think, “Gosh, if you listen to the words of country music, it brings back moments in your life that you can relate to.” I think that’s how I got started listening to country music. Some of these songs I can just belt out and sing.

Q: You’ve said you like to garden in your free time. What do you get out of it?
A: I just love to see a finished product. When I am out in my yard and planting flowers and pulling weeds and mowing the yard or weed-eating, you just can back up and in that moment you can see beauty. Also, you’re away from the telephone. It’s relaxing.

Q: Do you have any kind of feel for how the new basketball season will look?
A: I understand that our normal is going to be different. I just don’t know what the future holds. I have to believe what I was raised to believe—that through all the trials and tribulations, this too shall pass. “When” is the question that all of us are asking every day. I know that I’m a rule-follower, and I’m trying my best to abide by what we’ve been told to do as a country and at Baylor. I miss what we knew and have known as our normal life.

Q: How does the team regain the momentum to chase another championship?
A: I feel like we have unfinished business. I feel like there was no closure to our season. I just want to gather my kids in the locker room and be able to hug their necks. It’s almost like you have to finish up last year before you even start a new year. You don’t have those four seniors with you, but you have the returning players. It’s like we have to close out what last year was.

Q: What’s your reaction to being selected for the Hall of Fame?
A: I just reflect. I think about how I even got into coaching, how fortunate I was to be around the best in the business that impacted my life, both as a player at Louisiana Tech and as an assistant coach there, and then the chance that Tom Stanton [Baylor’s former athletic director] took on me when they hired me. He probably could’ve had any head coach that he wanted at the time.
And, I think about my players a lot. I think about the ones that took a chance when we didn’t have a product to sell. They came because of other things, and they opened doors for us as a staff to get into recruits’ homes. And then winning the championship so quickly like we did. And then the community embracing women’s basketball. It’s been a remarkable, consistent run. That’s the word that I use is that we are “consistently” relevant.