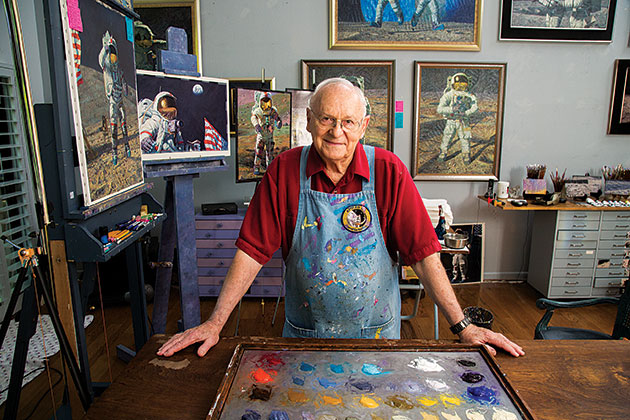 One of only 12 people who has ever walked on the moon, former astronaut and Apollo Lunar Module Pilot Alan Bean now creates artwork reflecting that experience from his home studio in Houston.

“It’s my dream that on the wings of my paintbrush, people will see what I saw, and feel what I felt as history was made,” Bean says.

Bean adapts artifacts from his historic 1969 moonwalk as art tools, using a boot to make subtle impressions and the hammer he used to chip off moonrock fragments to create additional dimension. The works also contain bits of foil insulation from the hatch between the Apollo Command Module Yankee Clipper and the Lunar Module Intrepid, tiny pieces of an American flag that visited the moon, and moon dust-covered NASA and mission emblems from his space suit.

Growing up in Wheeler and Fort Worth, Bean dreamed of being a pilot but was also drawn to art. He received a degree in aeronautical engineering from the University of Texas in 1955 and was soon commissioned in the Navy. While a Navy test pilot, he enrolled in night school to study watercolors and drawing, continuing his art studies even after becoming an astronaut.

“We humans can do a lot more than we ever imagined, if we’re willing to work and dedicate ourselves. I learned that at NASA. The only limits are the ones you place on yourself.” Today, he paints seven days a week, believing that working at something every day is key to doing it well.

“My generation will be remembered for many achievements, one of the greatest being our movement off the earth to begin exploration of the universe,” Bean says. “My paintings record the beginnings of our journey out among the stars.”