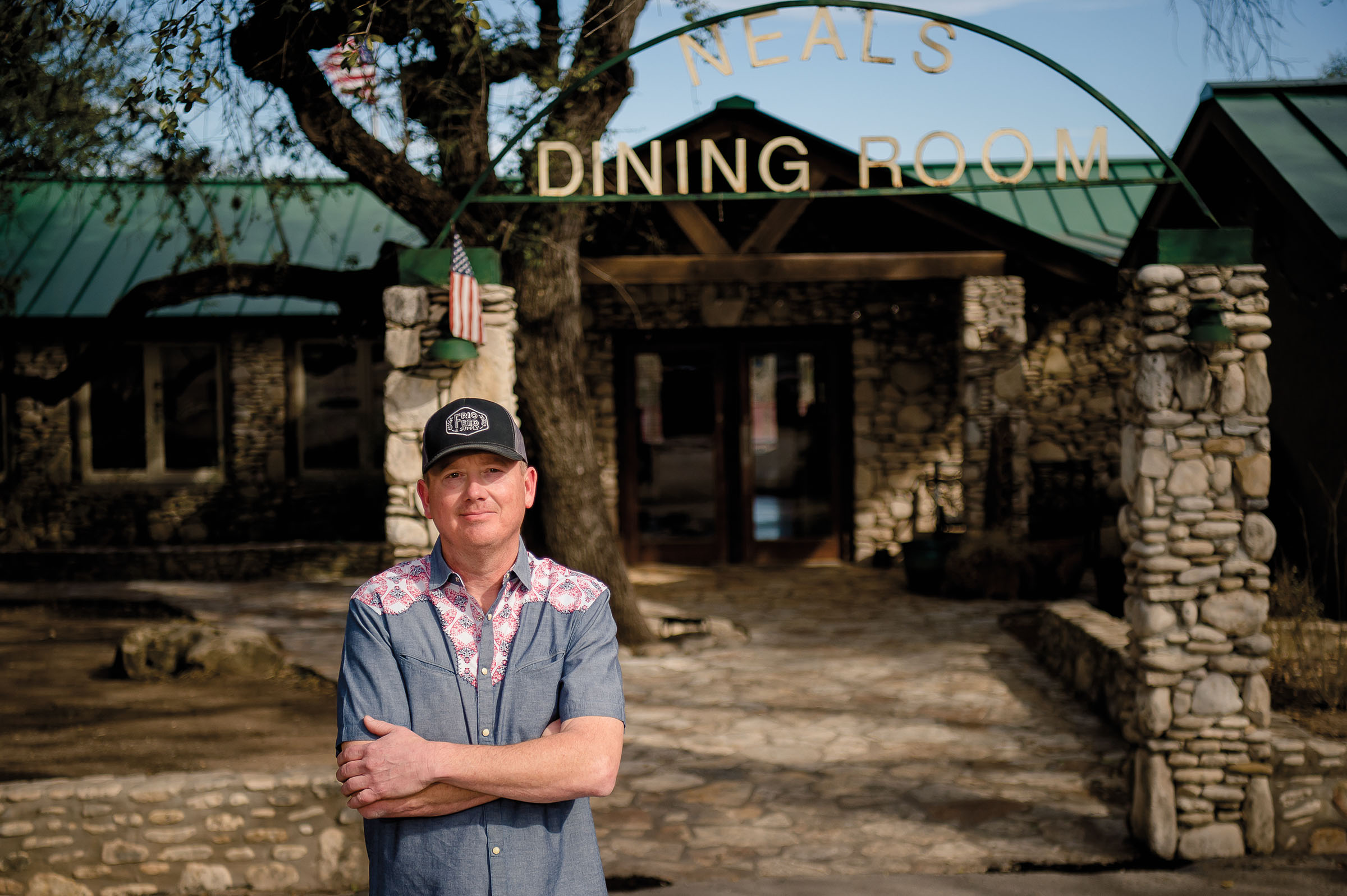 The tiny town of Concan, tucked in the rolling hills of Uvalde County, has been a summertime recreational haven since 1926, when Tom and Vida Neal built a restaurant and cottages along the banks of the Frio River. Nearly a century later, their great-grandson Chase Roosa carries on the family tradition as general manager of Neal’s Dining Room. Every year, from March through Thanksgiving, Roosa greets vacationers who come for a meal after swimming and floating in the Frio’s chilly spring-fed waters or hiking at Garner State Park, located 8 miles north. Long before it was a Hill Country tourist attraction, the Frio provided water for the Lipan Apache and other Texas tribes who frequented the southwestern edge of the Edwards Plateau. In the mid-19th century, Anglo settlers established ranches to raise goats, sheep, and cattle amid the rocky terrain. Today, the area still retains several ranches, but tourism drives the Concan economy.

“My great-grandparents Tom and Vida Neal came out here in the 1920s to be goat ranchers. They soon realized the river could draw people from the bigger cities. Concan was not necessarily on the map as a destination before then. They built the restaurant and most of the original cabins in 1926, and the fifth generation is now working here. It’s the only job I’ve ever had. I’ve lived here my whole life, except during my college days at Texas A&M. I started working here in my teens when my parents pulled me into the business. Not only is it family owned and operated, but it caters to families as well. Friends I made in childhood still come to Concan for their family vacations.”

“The name Concan comes from a card game from earlier times. The Lipan Apache used to camp around here, and the arrowheads on the wall at Neal’s Dining Room were found in this area. My dad and I love to go arrowhead hunting. The arrowheads are 5,000 or 6,000 years old.”

“The biggest draw is floating the Frio. Neal’s Lodges, which we sold to family friends about 10 years ago, rents out about 80 cabins, and they cater to tubers, taking shuttles up and down the river. Andy’s on River Road is another local outfitter. The Frio Valley Ranch golf course is just up the river road. Garner State Park is 8 miles from Concan, and it has everything: overnight camping, cabins, dining, an ice cream shop, a candy shop, mini golf, paddle boating, hiking trails, and nightly dances in the summer. Joe Jimmy’s at Neal’s Lodges has a great lineup of live music every summer.”

“We do a little bit of everything—mostly family recipes that have been handed down for generations. The staples are chicken-fried steak, fried chicken, hot pepper steaks, and hamburgers. We added more seating capacity about 16 or 17 years ago and built a big deck overlooking the river. Many of the tables inside the restaurant were originally built by my great-grandfather. We have hummingbird feeders by the windows, so while you’re eating you can watch hummingbirds doing the same thing.”

“There are two other places to eat in town. One is Hippie Chic’s River Shack and its sister restaurant next door, Hippies & Hops, which serves delicious pizza. They have a great outdoor atmosphere. The other is House Pasture Cattle Company, which has terrific steaks and shrimp.”

To the Bat Cave

“The Frio Bat Cave is about 5 miles away. In the summer, millions of Mexican free-tailed bats stay there. They fly out every night and fly back in every morning. When I was a child, I used to climb all through the cave, but now you have to stand outside. The Frio Bat Cave Tour leads you onto a ranch and up a hill to watch the bats fly out of the cave.”

“Birdwatching is huge in the spring. People from all over the world come here to see birds like the golden-cheeked warbler. The Texas Hill Country is close to South Texas and the coastal plains, and the spring migration period brings a confluence of so many different varieties at one time. That’s another reason why people flock here.