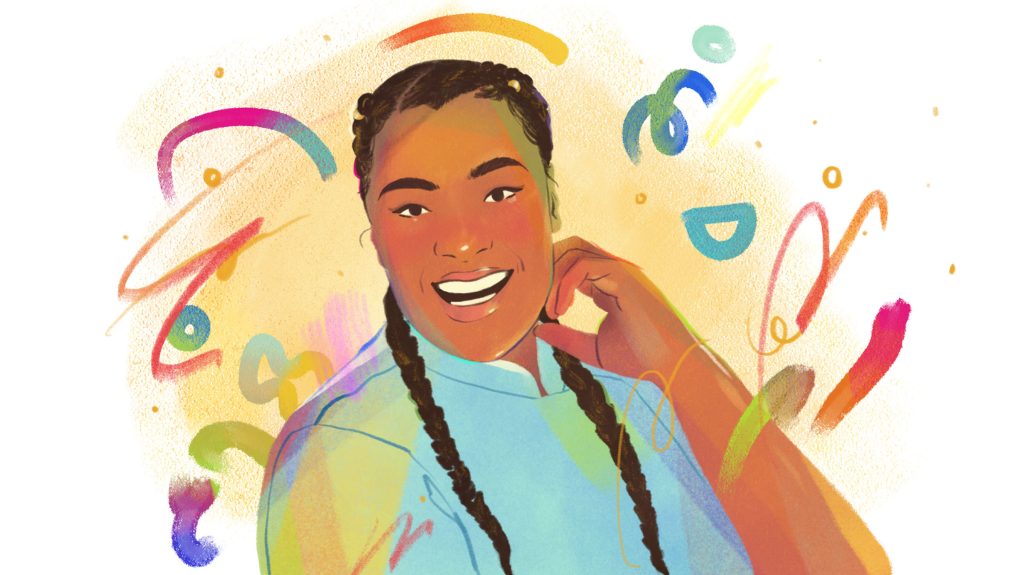 To watch Tiffany Derry on high-intensity TV cooking competitions is to witness grace under pressure. On cable shows like Top Chef and Bobby’s Triple Threat, the Dallas-based chef makes it look easy—working at lightning speed, nailing each minute element of a nuanced dish, never breaking a sweat. How does someone learn to do that? Derry credits IHOP.

The Beaumont native has built a stellar resume in the roughly two decades since she learned the ropes in the kitchen of the ubiquitous pancake chain. In the past couple of years, she opened her signature restaurant, Roots Southern Table, in Farmers Branch; expanded her Plano-based Roots Chicken Shak to Austin; traveled to Hawaii to cook for Oprah Winfrey; launched the ’Shef Tiffany Creole Seasoning spice blend; served as a food ambassador on a U.S. Embassy trip; and got engaged to her longtime sweetheart, William Johnson.

Derry has twice been a finalist for a James Beard Award, among the highest honors in the culinary world. Last year, she was recognized in the “Best Chef: Texas” category, and Roots Southern Table made the national finals for “Best New Restaurant.”

With Roots Southern Table, Derry and her business partner, Tom Foley, explore soulful Southern cuisine through a modern lens. The dishes lean a little toward fancy just in time to sway back toward comfort. Though the menu changes frequently, recent offerings have included dishes like Texas peaches and prosciutto topped with micro-herbs and tempura-fried zucchini blossoms with house-made ranch dressing.

Chatting about her journey on a Friday at her restaurant, Derry pauses only to phone her mom in Beaumont to help recall family food memories. Then it’s showtime. She grabs her chef coat, rallies her staff, and she’s off to the kitchen races.

TH: When did you start cooking?
TD: I was 15, wanted a job, and went to IHOP. About the same time, I started in our high school’s [Ozen High in Beaumont] culinary career training center. We did catering and cookoffs, and I learned this was my field. The experience from IHOP was huge. I worked the graveyard shift after high school and all the way through culinary school, too. As a short-order cook, I was the fastest you could find. I took that foundation and applied it everywhere I worked.

TH: Did culinary school provide the segue into upscale cuisine?
TD: I got my culinary degree from The Art Institute in Houston, where I interned at the restaurant Pesce with chef Mark Holley. Then he offered me a permanent job. I was hesitant to leave IHOP because I was making good money by that time, and I had bills. But Mark matched the pay, and I was in fine dining.

TH: What was the Houston food scene like, and how did Dallas become home?
TD: Houston’s food community was chefs hanging out together all the time—it’s one big family. But a job with Landry’s gave me the chance to open restaurants for them, and one was in Dallas.

TH: How do you blend TV gigs into your work life?
TD: In 2010, I was on season seven of Top Chef. Then I was a finalist again for Top Chef: All-Stars the next year. Private Social [the Dallas restaurant where Derry worked at the time] closed in 2013, and I started doing more TV, like Bar Rescue and Cutthroat Kitchen, traveling between New York and LA. But Dallas remained home. In the past year, there’s been Guy Fieri’s Tournament of Champions III, the PBS show Great American Recipe—we had to taste over 20 plates a day—and Bobby’s Triple Threat [with Bobby Flay]. It’s a lot of travel, but it’s so much fun.

TH: What are some of your interesting travel adventures beyond TV?
TD: I’ve served as an American cooking ambassador for the U.S. Embassy for groups in Mumbai, Paris, and most recently, Albania. It’s fun and rushed because the days are long, and we often go from city to city in a country. But it’s cool because I always learn something. Also, I got to go to Hawaii a couple of times with a team to cook for Oprah.

TH: How did you get back into restaurant work again?
TD: Tom Foley and I teamed up to launch Roots Chicken Shak in Legacy Hall in Plano, which was a steppingstone to Roots Southern Table—a concept I planned for seven years. The goal was to do traditional Southern dishes with cheffy influences, and we finally landed in just the right spot. Farmers Branch really supports us.

TH: You’re committed to supporting the community. How does this take shape?
TD: I’ve been involved with the national program called No Kid Hungry for a good while. I’ve also been part of the James Beard Foundation’s Chef Bootcamp for Policy and Change, a program that lobbies to get nutrition into public schools and protect SNAP recipients. I recently hosted a big dinner to benefit The Defensive Line, which aims to end the youth suicide epidemic, especially among people of color. With Roots Chicken Shak, we make business ownership possible for people who haven’t had the opportunity. It’s a way we hope to help close gender, racial, and wealth gaps.

TH: How did you develop the dishes for Roots Southern Table?
TD: I wanted to educate my sous chefs, so we went to Beaumont to eat my mom’s gumbo and cornbread and pound cake. In Louisiana, we stopped for boudin at gas stations, ate oysters on Lake Pontchartrain. In New Orleans, we went everywhere so they could see where food can go. We took notes, and every night we reviewed everything we’d eaten.

TH: When you’re traveling in Texas, where do you go to eat?
TD: I’m in Austin a lot with our newer Chicken Shak there, and I love the food around town, like what they’re doing at Canje with all the Caribbean influences. And the barbecue, like at Black’s—you can’t beat that.

TH: But you’re still attached to your family’s cooking back home?
TD: Everything we do in our family is centered around food. My mom is one of 11 kids, and I have more than 50 first cousins in Beaumont and Houston. Someone is always cooking. At the holidays, I just show up. One uncle is in charge of beef roast. Another does candied yams and caramel cake. My mom does dirty rice and rice dressing. There’s turkey, ham, and duck, too.

TH: Is your popular chicken and potatoes in duck fat dish a family recipe?
TD: It’s funny, I was giving credit to France because I first ate duck fat fries there at age 18. But when I was about 30, I thought, What am I talking about? I’ve been eating duck my whole life! My grandmother takes a whole duck and bakes it on top of a bed of her cornbread dressing, and the fat just drips down with so much flavor. I did my own version a couple of years ago, and my mom said, “It’s good but it’s not quite the same.” It didn’t have my grandmother’s touch.

Tiffany Derry’s restaurants include Roots Southern Table in Farmers Branch and Roots Chicken Shak in Plano and Austin. Watch her TV appearances this spring on PBS’ The Great American Recipe and later in 2023 on Food Network’s Tournament of Champions III. tiffanyderryconcepts.com