Preservationist J.P. Bryan Has Amassed a Lifetime’s Worth of Texas History 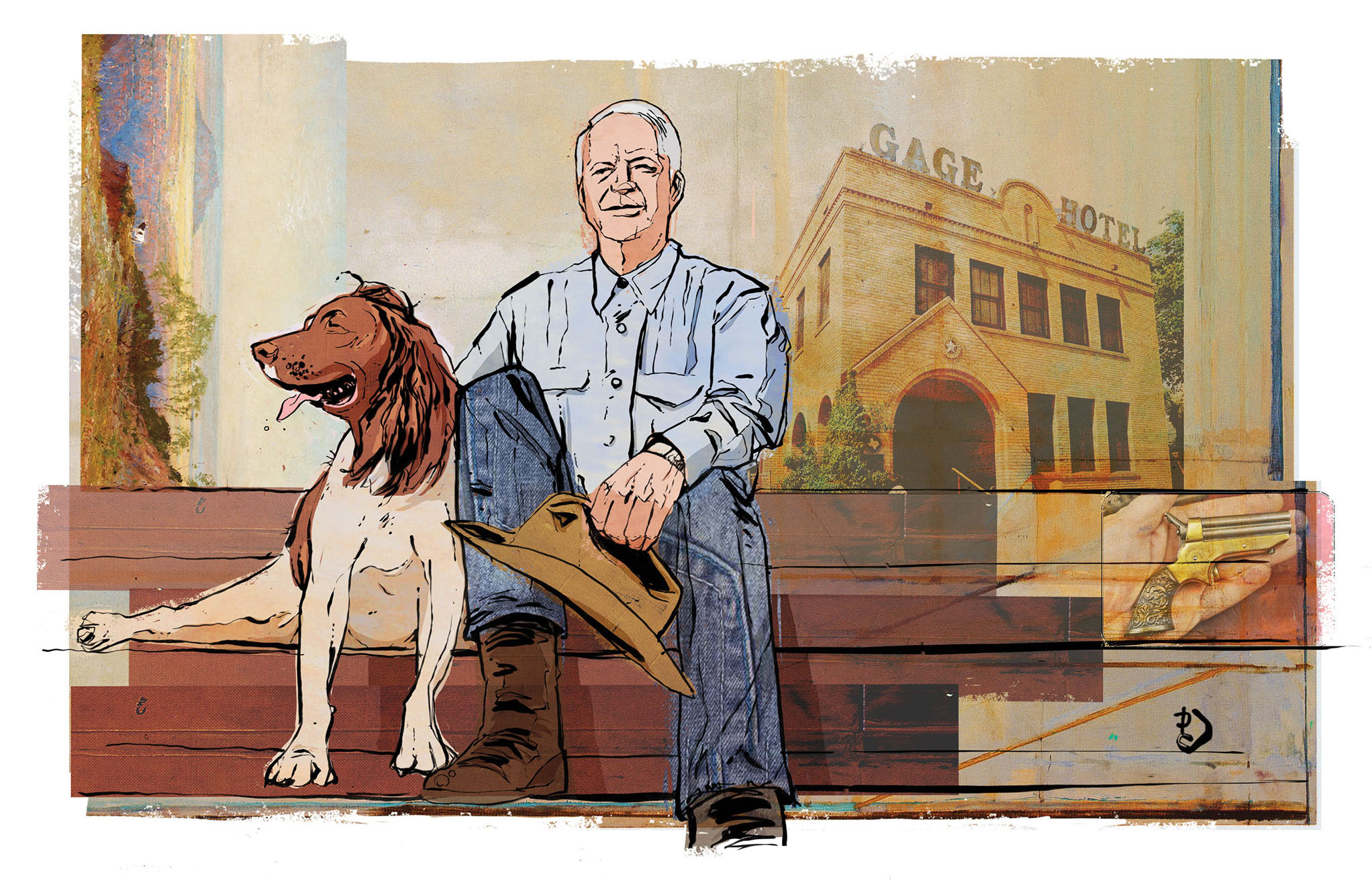 You’d be hard-pressed to find someone more fully connected to Texas history than J.P. Bryan. A relative of Stephen F. Austin—his great-great-grandmother was Austin’s sister—Bryan grew up in Freeport with a dad who served as the president of the Texas State Historical Association. Bryan attended the University of Texas and found success in the energy business in Houston, which funded his passion for collecting and preserving objects of Texas history. Since the late 1970s, Bryan and his wife, Mary Jon Bryan, have also dedicated themselves to restoring old buildings, from the Gage Hotel in Marathon to a historic home in Round Top to an abandoned orphanage in Galveston, the latter of which the couple reopened five years ago as The Bryan Museum. It’s not unusual for visitors to bump into Bryan, his faithful spaniel at his side, at the Gage or the Galveston museum, where he’s known to lead impromptu tours and share stories about his acquisitions, such as the .22-caliber “Ladysmith” Smith & Wesson revolver carried by the first female Texas Ranger, Allie Townsend, of Alpine. Bryan recently celebrated his 80th birthday, and though he marked the occasion with a public presentation at the Gage titled “Looking Back,” the preservationist isn’t done yet. Later this year, he plans to open a new museum in Marathon called Visions of the West, which will explore the history of the Trans-Pecos region.

Q: The Bryan Museum contains more than 70,000 items. Where did you keep everything before the museum opened? And how did Galveston come to be the museum’s home?
A: Our offices in downtown Houston held much of the collection. When we decided to wind down the business in 2005, we began thinking about what to do with the collection. We’d already created a museum environment, with artifacts displayed in rooms. We had docents leading tours for school children, and we knew the visual experience in telling the story of the settlement of the West would be impactful in a museum.
In Houston, architects wanted to do something modern, and property was too expensive. We really wanted a historic building, and then our curator found the old orphanage on 21st Street. Once we walked in, we knew this was it. It had survived several hurricanes and was safe from flooding. No serious structural changes had to be made, though we had to install heating and cooling systems, and a green geothermal system that meant drilling more than 40 wells.

Q: Now with five years under the museum’s belt, what are your reflections?
A: We have defined what we are, our character, and we’re telling the story of Texas and the American West in a comprehensive way. We’ve defined our mission: to educate individuals, especially children, and to examine the conduct of the people who were part of the greatest events in the world’s history. We’re continuing to reshape education with outreach, creating whole curriculums for high schools. It’s important to understand the freedoms that the settlers came here for. I’ve always had a real love for history, and how and why it happened. It needs to be told as truthfully as possible. It’s not political; if you make
it political, it becomes adversarial.

Q: What are some of your favorite items among the many saddles, weapons, artworks, and other artifacts in the Bryan’s collection?
A: My first pistol is a four-barreled Sharps pistol I bought when I was 9 for about $10 from money I’d saved up cutting the grass. Every time my father brought me with him to Houston from Freeport, where we lived, I’d eyeball it in an antique gun dealer’s shop. Finally, I bought it. Of all the saddles, there’s one in particular with a lot of silver detail work, made in Denver for a woman who lived in Delaware and raised Russian wolfhounds. I bought that in Cody, Wyoming. Of all the Frank Reaugh paintings, my favorite is one I call Visions of the West, with a Longhorn staring over the Palo Duro Canyon. It epitomizes everything Reaugh thought of the Longhorn—he believed it was the embodiment of the pioneer spirit.

“So much of Texas deserves to be preserved for future generations. We have been so quick to build new things that we have neglected our past.”

Q: After growing up on the Gulf Coast and spending your career in Houston, how did you wind up with a ranch and hotel in West Texas?
A: I didn’t aim to have a big ranch. But my wife had ranching in her background, my grandfather was a rancher, and I liked working cattle as a child, so the idea of owning a ranch appealed to us. We began looking farther west, as the property was cheaper, and found the Chalk Draw Ranch in Brewster County, buying that in 1978. We bought the [Gage] Hotel in Marathon in 1979 because we needed a place to stay in town—it’s almost an hour out to the ranch. It is a 1927 building and needed a great deal of work inside; there was so much water damage, and nothing worked. Gradually we added on the Los Portales addition in 1993 and bought buildings next door and in the block east for the restaurant, bar, and retail. We began buying up properties all around, as it’s an interesting way to give historical perspective to the town. Now, 26 different homes and buildings go under the Gage umbrella. The Trans-Pecos is the last frontier in the Lower 48, without question, and that’s why we’ll open a small museum in Marathon later this year. We’re calling it Visions of the West, dedicating it to the history of the Trans-Pecos and its people, including the Comanche and Apache.

Q: You sued Brewster County officials in March over their decision to temporarily close hotels in response to the coronavirus. How has the pandemic affected the Gage Hotel?
A: It’s going to be a struggle to rebound. We lost $600,000 from lost business and refunding money to guests, and another $300,000 in payroll and other expenses. But we are resilient. This state was not built by people who ran and hid when faced with adversity. We are good at turning a face of optimism to it all.

Q: Your work has included restoring natural resources, too.
A: We restored 50,000 acres of grasslands on our West Texas properties. We filled in the draws created after 100 years of erosion and leveled the land so it could regenerate the grass. Then came deer, elk, and lots more quail, all forms of reptiles and birds, and the climate even changed. Nature gives back, all the things that stir the soul. The same narrative drives restoration, preservation, and conservation—they all give back bountifully.

Q: Why are historical restoration and preservation important?
A: I saw how historical restoration, if properly done, could be a real economic driver—in small communities especially, if they’re struggling to find identities for themselves. If you treat these places with respect, people will want to see what you’ve done and come away with the conviction of wanting to give back. So much of Texas deserves to be preserved for future generations. We have been so quick to build new things that we have neglected our past. The effort in restoring the orphanage in Galveston and the Gage in Marathon resonates far beyond the walls of the buildings themselves. We will have 100,000 visitors between the two places this year, and guests will come away with stories to tell about the areas and their experiences. They tell a story about the phenomenal state we live in, and in a positive vernacular.

J.P. Bryan’s collection of Texas and Western historical relics is on display at The Bryan Museum in Galveston and the Gage Hotel in Marathon. He plans to open a new museum of Trans-Pecos history in Marathon later this year. thebryanmuseum.org; gagehotel.com