The wildlife ecologist succeeded in her quest to spot the most birds in the U.S. and make space for women in competitive birding

Written by Tyson Bird | From the September 2022 issue | Updated: August 24, 2022 | Filed Under: CultureOutdoorsPeopleTRAVEL 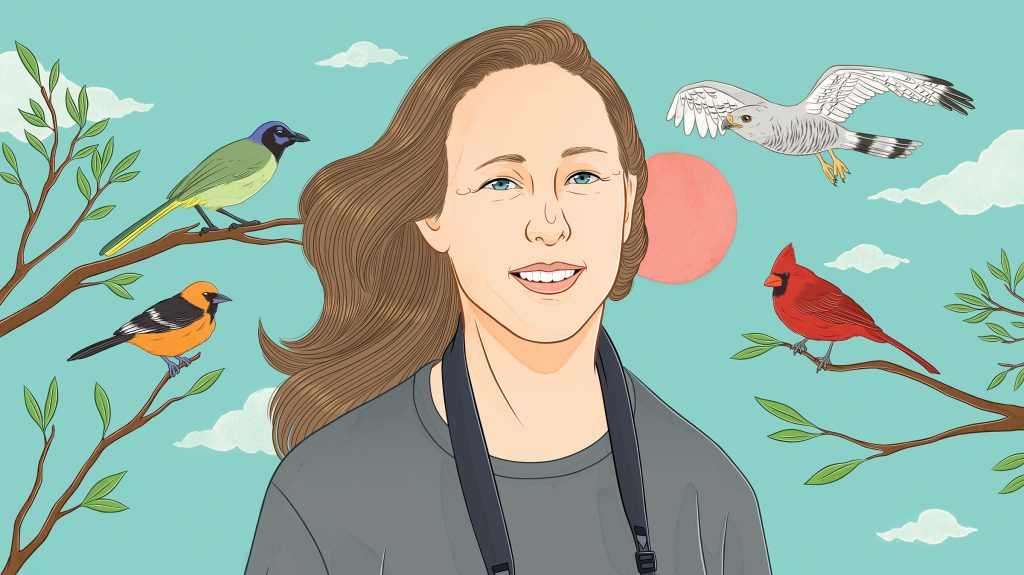 A warm breeze rustled the fronds of sabal palm trees as Tiffany Kersten pulled into the parking lot of Estero Llano Grande State Park in Weslaco. A spirited symphony of birdsong filled the tropical summer air as the rising sun brightened a vibrant yellow Couch’s kingbird perched on a utility wire. From the hatchback of her Chevy Spark, Kersten retrieved a telescope, daypack, and binoculars. Setting off on the park’s trail, I joined Kersten for an excursion among the park’s wetlands and prairies. In just two hours, we spotted 36 species, including South Texas natives like the Altamira oriole and the plain chachalaca.

“I came to the [Rio Grande] Valley because of the birds,” notes Kersten, who grew up in Wisconsin. After studying wildlife ecology in college, Kersten worked a series of wildlife survey and park jobs before landing a position at the Santa Ana National Wildlife Refuge in 2012. She later worked at the Quinta Mazatlan World Birding Center in McAllen and the McAllen Nature Center before starting a birding tour company—Nature Ninja Birding Tours.

A tour client first suggested Kersten try for a “Big Year”—an informal competition among birders to spot as many bird species as possible within one year in the lower 48 states. At first, Kersten found the idea a little ridiculous. She has a dog, and a mortgage to pay. “It was almost a month later, when I flushed a scaled quail in the Franklin Mountains, I thought, ‘Maybe I could try it,’” Kersten recalls. “I was very stressed about everything else. It was a focus for me while I waited for the rest of my life to sort itself out.”

One sighting led to another, and over the course of 2021, Kersten set a Big Year record by spotting 726 birds. Crisscrossing the country, she saw everything from a Cuban pewee in Florida to a blue-footed booby off the California coast. She’s used her moment in the spotlight to encourage others—especially women—to appreciate birds and to consider the limitless possibilities in the world of birding.

TH: How did you first get into birding?
TK: I was 12 and took a birding class with my mom at Mosquito Hill Nature Center in New London, Wisconsin. I was the only kid among mostly retired people. I remember struggling to see some of the birds through my binoculars. But then we took a trip to see sandhill cranes, and there were about 2,000 of them in a cornfield. They were calling, courting, and displaying. That was the moment where I was like, “OK, birds are cool.” I was a backyard birder from there. I would watch the bird feeders and the juncos in the wintertime at my parents’ feeder. I started birding again at Northland College, where I studied field ornithology and wildlife ecology. Then, I started to work on surveys for the U.S. Fish and Wildlife Service.

TH: Do you have a favorite Texas bird?
TK: The gray hawk. It is a raptor, so it’s kinda badass for that reason, but it is also subtly beautiful. The hawks have these very fine gray and white streaks on them. It’s both powerful and beautiful.

TH: What are your favorite Texas birding spots?
TK: Here—Estero Llano Grande State Park in Weslaco. There is such a diversity in habitat, which leads to such a diversity in the bird species. In about 200 acres, you can see 100 species. The Hill Country is also great. South Llano River State Park is a gorgeous park with great bird life. It’s in Junction, which is northwest of San Antonio. That was my launch point whenever I would drive west during my Big Year. I drove from here to the Florida Keys and back twice. Arizona four times. Twice to California, one which included driving from California up to Washington State. Halfway through the year, I posted on social media about my Big Year and spreading the word about female birders and personal safety, and many strangers reached out. They picked me up from the airport or offered me a place to stay that night. They paid for lunch for me. It was a joint effort. A lot of Big Year birders are like, “I did this!” And I’m like, “No, literally hundreds of people contributed to my ability to do this in one way or another.”

TH: You’ve spoken publicly about being sexually assaulted in 2018. And during your Big Year you raised funds to distribute personal safety alarms to women you meet on the trails. What was it like to embark on these trips alone?
TK: I committed to doing my Big Year, but I wondered if I was just putting myself in a situation for this to happen again. During one of my first big trips, I was in a remote spot along the Sandia Crest [a mountain flanking the east side of Albuquerque, New Mexico]. These two men wandered down this path and out of view, and then they came back to the trailhead and loitered. I was getting super dizzy, which is how my body responds to anxiety. I almost passed out. They did eventually leave. I had a couple of similar instances like this. But as the year went on, I realized how many good people are out there. Bad things do happen, and you need to be vigilant. I thought my Big Year would harden me, whereas it softened me instead.

TH: Could you describe the moment when you broke the Big Year record?
TK: I was in Oklahoma looking at Smith’s longspurs, halfway between Tulsa and Stillwater. This was Dec. 18. I got a text message at 9 a.m. that the bat falcon had been re-found at Santa Ana National Wildlife Refuge [in Alamo]. And I was like, “We need to go. I don’t know where I need to go, but I need to go.” I booked a flight out of Tulsa two hours later and flew back. It was a 20-minute drive to the refuge. I sprinted the half-mile to the tower and stuck my eyeball in someone’s scope. I saw the bird, and I broke the record by spotting 725 species. I was still wearing my winter clothes, and it was 85 degrees.

TH: What do you hope your accomplishment does for female birders?
TK: I’m hoping to set an example for women—to show women there is space for us if we want it in the competitive birding arena and as woman bird guides. I’ve been in lots of situations myself where I’ve been dismissed because I’m a woman. There’s a lot of that; it’s not just in birding. I’ve just started offering all-inclusive women’s retreats. I’m excited to have a more emotionally safe space for women to learn and grow as birders.

TH: What can birders do to help with conservation?
TK: Purchasing duck stamps is always good. [Proceeds from the federal stamps, which serve as hunting licenses for waterfowl, fund wetlands conservation.] These dollars go straight toward conserving land in the National Wildlife Refuge system. Another way to help is to create your own backyard habitat. In Texas, having a water source is even more important than having a seed source. Also, plant native species. Native plants and water are the best ways to create habitat for birds.