My Hometown: Take a Tour of Decatur with Longtime Newspaper Publishers Roy and Jeannine Eaton

Heritage and Hospitality, from ‘Eighter from Decatur’ to Sweetie Pie’s Ribeyes 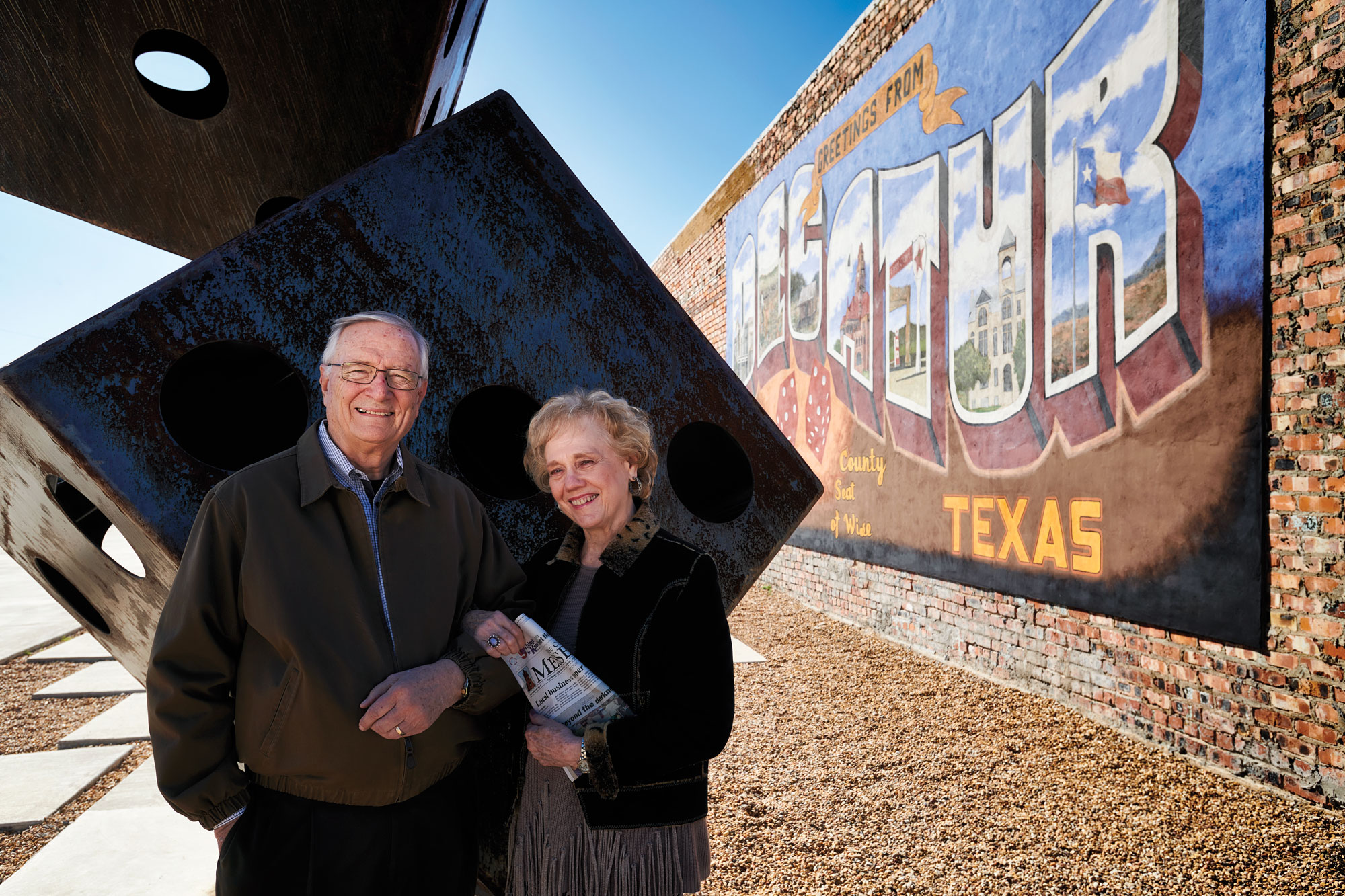 Roy Eaton’s earliest memory of the Wise County Messenger was his parents eagerly awaiting its Thursday delivery during World War II for news about local servicemen. “Many were our friends and neighbors,” recalls Roy, who would leave the family ranch near Decatur for college, become a TV news anchor in Fort Worth, marry his high school sweetheart, Jeannine Eaton, and return with her in 1973 to buy the weekly newspaper his parents read.

Decatur was born in 1856 when the Texas Legislature created Wise County and directed the establishment of a county seat. The town benefited from three transportation eras—cattle drives on the nearby Chisholm Trail in the 1860s, the arrival of the Fort Worth and Denver Railway in 1882, and the route of the Meridian Highway from Mexico to Canada in the 1920s.

The Eatons made the Messenger, founded in 1880, an award winner, as their civic contributions doubled down on their hometown allegiance. Jeannine, in her roles as a director of the Decatur Main Street Committee and Wise Regional Health System, helped spearhead a downtown revitalization and the development of a medical center. Roy headed the chamber of commerce and volunteer fire department. “It’s important for the newspaper to be a leader in the community,” Roy says as the couple leads a tour of their favorite hometown stops. “But you must walk a fine line between being a cheerleader and writing hard-hitting news coverage.”

Jeannine: “Our beautiful pink Texas granite centerpiece was designed by J. Riely Gordon and built in 1896 for $110,000. The county commissioners were voted out because citizens considered it an extravagance. Now, it anchors a vibrant business district. We have merchants like Biggar Hat Store, where you see hat-making firsthand.”

Roy: “It is a dream of journalists to own their own newspaper or broadcast station, and we got that when we bought the Messenger. The switch from TV anchorman to publisher of a small weekly newspaper was interesting. First, you meet the people you write about on the steps of the post office or in church on Sunday. So, accuracy is more important than ever. Hard-hitting reporting occasionally upsets civic boosters and elected officials who want the public to think ‘everything is great.’ But integrity of news coverage must be the hallmark of a good community newspaper.”

Roy: “The Wise County Heritage Museum, located in what was Decatur Baptist College, was the state’s first junior college. It was a major blow when the college packed up and moved to Dallas in 1965 to become what is now Dallas Baptist University. But our historical commission acquired the main building. One room is dedicated to the Lost Battalion from World War II, partly made up of area soldiers. Also on the grounds is the Woody Cabin, circa 1854, said to be the first such dwelling built in the county.”

Jeannine: “To the chagrin of church leaders, Decatur had a huge highway billboard featuring a pair of dice with the words ‘Eighter from Decatur, County Seat of Wise.’ The billboard is long gone, but the legend lives on. One story is the Waggoner Ranch headquarters, once in Decatur, employed a cook named Ada, and the cowboys considered her a good luck charm. In Texan speech, sometimes ‘er’ is added. So, when they rolled the dice looking for a pair of fours, they would yell ‘Ad-er from Decatur.’ Today, that refrain is on a downtown mural and a sculpture of two dice, each showing a four.”

Jeannine: “There are four restaurants on the courthouse square, including well-known Sweetie Pie’s Ribeyes. Next to a 1930s tourist court on the old Fort Worth highway, the Whistle Stop Cafe has pie to die for— call ahead or they may be sold out. West of downtown, the line of pickup trucks in the parking lot tells you how much we appreciate Jesus and Maria Torres’ cooking at Casa Torres.”