Born into a life of privilege, Starr had a history of making bad choices in men who met violent ends 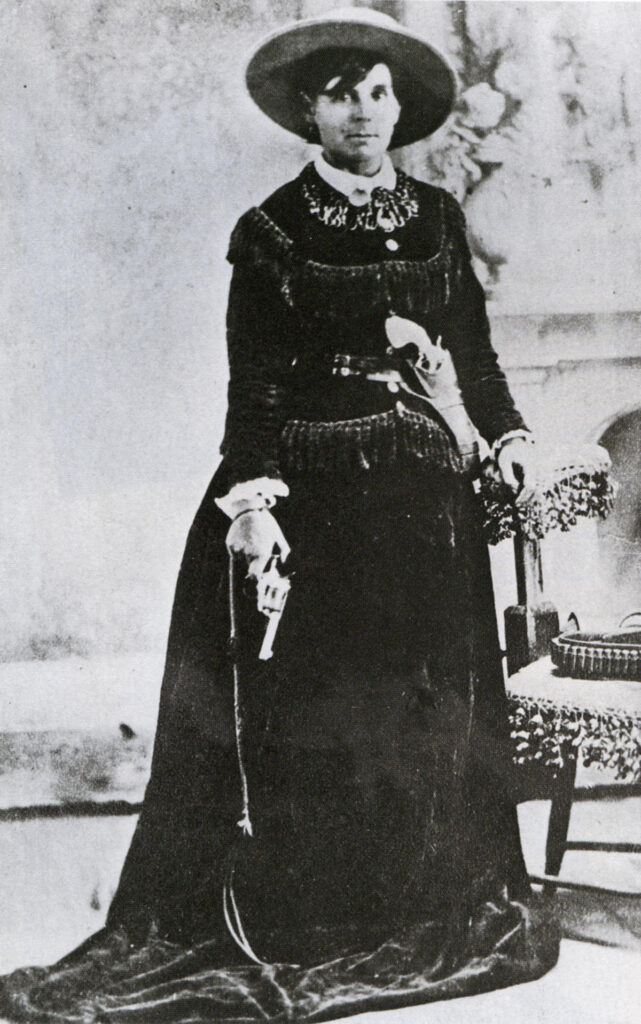 A studio portrait of Belle Starr probably taken in Fort Smith, Arkansas, in the early 1880s. Photo from Wikimedia Commons.

As with so many figures from the wrong side of the law in the raw days of frontier Texas, it’s difficult to sort the facts from the fiction about Belle Starr. Did she remain “the Petticoat Terror of the Old Southwest” until her murder in Indian Territory in 1889, or had she long since been reformed by then? And of what little is relatively well-documented, such as her youthful stint as a North Texas horse thief and the first of many failed marriages that ended violently, you find contradictory accounts of the whys and wherefores.

One fact we do have is that on this day 155 years ago, 19-year-old Myra Maybelle Shirley married Jim Reed in Collin County.

The daughter of a successful innkeeper, Starr grew up in privilege in Carthage, Missouri, learning all the Victorian graces of a lady: piano, Latin, Greek, Hebrew, and an appreciation for literature at a local “female academy.” If it weren’t for the Civil War, Starr might have remained in Carthage as a slightly high-strung community leader, perhaps contributing to a minor scandal or two at some point.

But the Civil War was nowhere worse than in the border state of Missouri, with its patchwork population of Unionists and rebels living side-by-side. There and in neighboring Kansas, partisan warfare had broken out even before the official declaration of hostilities, and the laws of civilized warfare did not apply—especially on the Confederate side. Horseback guerillas fought under leaders like Quantrill and “Bloody Bill” Anderson, men who seldom answered to any higher chain of command. Their horsemen were a who’s who of Reconstruction Era outlaws, including the notorious Younger and James brothers, who would later use many of the same hit-and-run tactics they learned in the war for robberies of banks, trains, and stagecoaches.

Though true battle-size conflicts were rare, skirmishes between the Union Jayhawkers and Confederate Bushwackers were many, and savage. Massacres were the order of the day, and the war, localized to Missouri and Kansas, engendered a generation of sociopaths, or at the very least, thousands of young people with few economic prospects, hardened to killing and duty-bound for vengeance.

The Shirley family was no exception. After Starr’s beloved older brother Bud Shirley—the sibling who took her hunting, fishing, and trapping in the Missouri wilderness—was killed in one such bloodletting, and the wartime economy ruined the family, the Shirleys moved to Scyene, Texas, in hopes of a new start. No trace of Scyene remains, but it once stood just north of the Pleasant Grove area of East Dallas and just southwest of what is now Mesquite. (Some older newspapers place the Shirley home there and not in Scyene.)

Two nearly adjacent Texas State Historical Markers commemorate Starr’s youthful days there. One stands in the median of Old Scyene Road and State Highway 352. The other marker recalls the town’s schoolhouse, church, and demise (bypassed by the railroad, the town died like so many others). That marker stands by the side of a convenience store at 2963 Belle Starr Drive, steps away from the Old Scyene Road marker.

This is where Belle Starr’s rough road to immortality began with her marriage to Jim Reed, a fellow Missourian whom Starr had carried a torch for since she was a schoolgirl in Carthage. Now, after the war had embittered and impoverished them both, he was all hers.

Reed had fought in the war under the notorious rebel partisan Quantrill, and his comrades-in-arms, Frank and Jesse James and the Younger brothers, were thundering down from Missouri via the Indian Territory, with strings of stolen horses to sell in and around Dallas. There, they found many sympathizers among the sullen defeated ex-Confederate populace.

Soon enough, Reed got caught up in the life, and after killing a man in Arkansas, he and Belle and their young daughter, Pearl, fled to Los Angeles, then a town of under 10,000. Reed reportedly made his living there as a gambler, but after his arrest for passing counterfeit money, word of his violent criminal past caught up with him. With a price on his head, Reed brought the family, by this time joined by a son, back to Texas.

Old North Texas newspaper reports—drawn from accounts by people who claimed to have known the couple—placed them back in Scyene or near the Denton County town of Ponder. Some had them further north near a long-gone settlement by the name of Rawhide. Others say that by this time Reed had taken up with a young and rich Dallas woman named Rosa McCommas, and Starr had headed back to Missouri with kids in tow. Still other reports have her in the Indian Territory.

Apparently separated from his wife, Reed was free to carry on his rampages utterly untethered by family life. It wouldn’t last for long: He was gunned down in a cabin north of Paris by a lawman who posed as a friend and collected the $1,500 price on Reed’s head.

Called in to identify the body, Starr was reportedly briefly housed in the Paris jail, which stood at the southeast corner of Main and Kaufman streets. That likely brought an end to Starr’s period of residency in Texas. Perhaps already by this time she had taken up with Sam Starr, leader of a renegade band of Cherokee based in their nation in what is now southeastern Oklahoma. The two married, she took his name, and it is said their brief union was the happiest time in her life. She stayed home and managed his criminal affairs—horse thievery, bootlegging, and armed robbery, mainly—while cutting a grand figure riding her mare Venus on periodic trips to nearby towns.

It is said Belle favored a dramatic plumed hat, a necklace of rattlesnake rattles, and fine dresses and boots. She wore around her waist two cartridge belts and two pistols and was said to be a crack shot and an excellent sidesaddle horsewoman. The Starr gang’s criminal enterprises prospered enough to enable her to bribe their way out of jams, at least when it came to local law enforcement. The feds were another matter, and in 1883, Sam and Belle Starr were arrested on a charge of horse theft by U.S. Marshal Bass Reeves, the legendary African American lawman some believe to have been the inspiration for the Lone Ranger. Hauled before Isaac Parker, the hanging judge of Fort Smith, Arkansas, each received a slap on the wrist—nine months in a federal pen in Detroit.

It’s uncertain how deeply the Starrs got back into their old ways after their return from the pen, but the marriage, at any rate, seemed happy enough, if interrupted by Sam’s long stints in hiding, during which Belle would routinely take lovers. Nevertheless, they remained a couple until Dec. 17, 1886, when Mr. and Mrs. Starr were dancing at a country Christmas party and a gunfight broke out with Sam’s cousin and nemesis, policeman Richard West. Both men fell mortally wounded. Belle was a widow once more.

A plump, somewhat wild-eyed beauty in her youth, later photo sessions reveal her to appear whittled-down, wan, and wearing the prototypical gangster’s moll sneer. She took up with a string of colorfully named outlaws—Jim French, Jack Spaniard, and a Cherokee named Blue Duck, who by the standards of his time and place, was little more than a ne’er-do-well—yes, he once murdered a man, but it was a result of a feud, which seemed to be the leading cause of death for men in that area at the time.

Judge Parker sentenced Duck to hang, but his sentence was commuted to life in prison, where he contracted tuberculosis. President Grover Cleveland ordered his release weeks before he passed away, peacefully and a free man, which made him very much an exception among Belle Starr’s husbands and lovers. French and Spaniard met violent ends—the former at the end of a rope, and the latter at the barrel of a gun. A short-term flame named John Middleton drowned in the Poteau River, some suspect as a result of Sam Starr’s jealousy.

Starr’s last husband—a Creek Indian 15 years her junior named Jim July—also died violently. He was gunned down by police. But before you set her firmly in your mind as a black widow, know this: July’s violent end came about a year after Belle Starr’s own.

And, as befits a woman whose life is tangled in thickets of mystery and tall tales, Starr’s murder remains unsolved.

The prime suspect was, and remains, one Edgar Watson, a tenant farmer on Starr’s land. As the story goes, she promised the Cherokee that she would no longer harbor criminals on her land, and when she found out Watson was wanted for murder in Florida, ordered him to leave, whereupon he laid in wait for her on a lonely road and shot her off her horse and killed her with two shotgun blasts. Save for a motive, there was almost no evidence, and Watson was acquitted.

Starr was buried near her home in her finest riding attire and clutching a pearl-handled revolver. A mixed crowd of white and Native American outlaws attended; nary a preacher was there at the graveside. The only nod to spirituality came when some of the Cherokee filed past her open grave and dropped in cornbread crumbs, as was reported to be their custom.

In her afterlife, imaginative reporters presented Belle as “the female Jesse James” and embellished on what few facts were known. She was linked romantically with various members of the Younger family, with some stories saying the James Gang’s Cole Younger fathered her daughter while hiding out with her and Reed in Scyrene. Younger denied it, so it seems likely that those who crafted her posthumous image wanted to embed her even more deeply in the affairs of the James Gang than she had been in reality.

Her legend exploded with the more fertile imaginations of dime novelists of the day. As one of them wrote:

“Of all women of the Cleopatra type, since the days of the Egyptian queen herself, the universe has produced none more remarkable than Belle Starr, the Bandit Queen, more amorous than Anthony’s mistress, more relentless than Pharaoh’s daughter, and braver than Joan of Arc.”

Bear in mind, while she was arrested on a couple more occasions, her only conviction was for a horse theft minor enough to send her to the hoosegow for less than a year.

Some revisionist historians claim she had been trying to walk the straight and narrow since the death of her first husband Jim Reed. If true, that would show her to have amazingly bad luck and/or a very flawed eye in her choice of men. And how to explain all those pictures of her where she loved to show off her pistols?

We may never know how much of Belle Starr’s life is fact or fiction, but about a year before her murder, which occurred three days before her 41st birthday, she provided a plainspoken self-assessment: “I regard myself,” she told a Fort Smith reporter, “as a woman who has seen much of life.” There’s no doubt in that.