Lace up your skates for roller derby across Texas 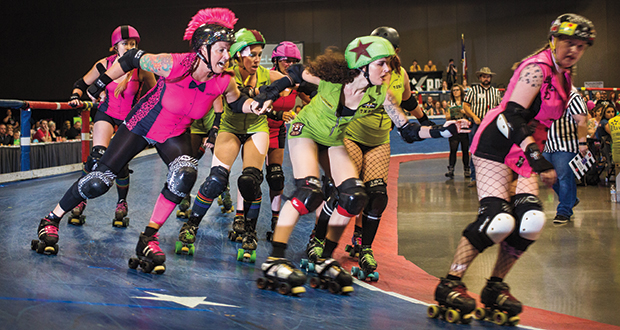 The Hellcats, in pink, take on the Cherry Bombs, in green, at the Palmer Evvents Center in Austin.

What better way to escape the winter doldrums than to watch outrageously dressed athletes on roller-skates race around a track, shoving and hitting each other along the way?

Texas is home to at least 19 roller derby leagues across the state. Here’s a list of them. Let us know if we missed any and we’ll add them to the list:

Roller derby leagues across Texas start their seasons with the new year, featuring energetic “bouts,” live rock bands, food and beer, and hundreds of fans—some dressed in crazy costumes—cheering on the skaters.

More than 15 roller derby leagues—most of them made up of women—call Texas home, from Beaumont to Stephenville and Austin, where a group of women revived the sport in the early 2000s and sparked a national trend with a cult following. The thrill of watching roller-skaters compete against one another, along with gravity and speed, attracts fans to the sport.

“For me it’s a lifestyle, it’s a family, it’s a sport,” says 26-year-old Kelsie Harlow, alias “Roxxi Revolver,” captain of the Hellcats in the Austin-based Texas Roller Derby league.

Reflecting the sport’s irreverent attitude, the players compete under pseudonyms. Kate Robinson, who derived her “Hermione Danger” nickname from the Harry Potter book series, skates for the Holy Rollers in Texas Roller Derby. She took up derby after playing tennis at the University of Oklahoma.

“I thought, ‘Oh, how hard can it be to hit people on roller-skates?’ Little did I know that it was extremely hard,” Robinson says.

Each bout consists of two 30-minute halves with a 20-minute intermission. Five skaters from each of the two teams compete against one another in short “jams” that last 60 seconds. Players start on two lines—one for the “blockers” and another for the “jammers,” who score points by lapping the opposition on the track. Whether banked or flat, the oval tracks extend about 160 feet long. Eight referees assign penalties and eject aggressive rules violators.

No one wearing skates escapes bruises or rink rash during the bouts. Kate Tweedy, a retired skater also known as “Kate or Dye,” still competes occasionally for all-star bouts, but says her mother has never understood her roller derby obsession. Serious injuries often occur; Tweedy once broke her humerus—the bone between the shoulder and elbow.

Roller derby traces its roots to 1935, when Portland, Oregon, resident Leo Seltzer started the Transcontinental Roller Derby, a series of grueling, 3,000-mile races on an oval track with two-person, co-ed teams that raced
all day.

In 1960, Seltzer’s son, Jerry Seltzer, took over the sport, which had developed into a contact sport on a banked track, and broadcast the games on TV stations across the United States and Canada. Jerry Seltzer still attends Rollercon, the annual roller-derby convention held every July in Las Vegas.

“The concept of the ‘jam’ came about when a skater would want to pick up distance on another skater and would suddenly break from the pack, and come around the track to gain a lap on the others,” Jerry explains in a phone interview.

Roller derby had fallen off the map by the 1970s. Television shows in the 1980s and ’90s attempted to revive the sport, but it didn’t last. Then in 2001, a group of Austin women began practicing the sport at Austin’s Skateworld, followed by bouts at Playland Skate Center.

The Austin revival has contributed to a global count of more than 1,500 roller derby leagues and 35,000 teams in 40 countries, according to the Women’s Flat Track Derby Association and the Roller Derby Coalition of Leagues. Primarily self-owned and operated, most of the leagues compete on flat tracks because it’s more expensive to build and maintain a banked track.

At the Palmer Events Center, the Texas Roller Derby league delivers the sport in a bawdy spectacle that might best be rated as “PG-13.” Cross-dressing male cheerleaders called “The Flamers” cheer on the skaters, and a “penalty mistress” spins a wheel for penalized players with punishments such as “arm wrestle,” “long jump,” “judge’s choice,” “two-lap duel,” and “pillow fight.”

“I really pulled from drag queen culture, and some of the other girls pulled from punk rock cultures,” says April Ritzenthaler, aka “La Muerta,” one of the Austinites who revived the sport in 2001 and helped shape
its image.

At the Texas Roller Derby league bouts, fans sit in portable bleachers and folding chairs or stand along the track’s periphery. Two announcers call play-by-play over a public-address system as large monitors display the action.

Nicole Foree, aka “Mardi Brawl,” a play-by-play announcer who also skates for the Holy Rollers, warns that roller derby can be habit-forming for fans and athletes alike. “Once you start skating, it’s kind of addictive,” she says. “It’s an incredible workout, and there’s so much strategy to it.”