URBAN-15 stretches the arts in San Antonio and beyond

Written by: Gene Fowler
Photos by: Will can Overbeek

Written by Art Williams, Photographs by Will can Overbeek | From the February 2018 issue | Updated: January 15, 2018 | Filed Under: Culture

When night falls in San Antonio during the annual spring Fiesta Flambeau Parade, URBAN-15’s troupe of drummers and dancers draws howling gritos of delight from the crowds packed along downtown streets.

Adorned with synchronized lighting and costumed as stars, butterflies, and other dancing characters, the URBAN-15 performers have also entertained throngs at San Antonio Spurs games and championship parades, Día de los Muertos celebrations, and the Alamo City’s annual contemporary art festival, Luminaria. Outside of San Antonio, the group has toured Mexico and performed at the inaugural balls and parades of Presidents Bill Clinton, George W. Bush, and Barack Obama.

The parade spectacles are just part of URBAN-15’s endeavor to spread the arts throughout its hometown of San Antonio and beyond. Headquartered in a 1930s former church on San Antonio’s South Presa Street, the nonprofit organization produces a dizzying array of artistic and community activities, including the drum and dance parades, laser light and music shows, poetry and film festivals, dance and rhythm workshops, and much more.

“We merge traditional Latino culture with contemporary aesthetics and the creative use of technology.”

“We merge traditional Latino culture with contemporary aesthetics and the creative use of technology,” says George Cisneros, URBAN-15’s music and media director and co-founder with his wife, Catherine Cisneros. Through events and classes, the group promotes its ideals of living more fully through creativity and the “Three Ms”—music, motion, and media—with populations young and old. “We want to motivate people to engage their imaginations and get moving,” adds Catherine, the group’s artistic director. “It’s important that there be lifelong participation in the arts.”

URBAN-15’s panoply of creative expression started in Austin in 1974, when 15 artists gathered at Clark Field, the former University of Texas baseball stadium, to perform George’s experimental composition “Six Point Gestures” with sound and movement. (I was one of the 15 participants and recall the piece as one that expanded my notions of art and performance.) From that production, the Cisneroses and a core group of artists, dancers, and musicians formed an ensemble—dubbed “URBAN-15” because of the number of people in the group at the time—and continued exploring movement, sound, and installation art in Texas, Washington D.C., and elsewhere. They established their home base in San Antonio in 1980.

The group’s educational and participatory objectives encompass several annual events that have become Alamo City favorites. The Holiday Laser Show is presented free for 8,000 school children every December. “My friend Tim Walsh, a reed player and co-founder of the ‘nuclear polka’ band Brave Combo, got the idea to work with light connected to musical pitches,” George explains. “We started experimenting with that and got a commission to create an opening ceremony with lasers for the Texas Sesquicentennial, which was performed on Town Lake in Austin in August 1985.”

After additional experimentation with laser technology, the Cisneroses debuted the Holiday Laser Show in 2004. Presented for a time in the Mesoamerican atmosphere of the Aztec Theater, the show now takes place in the Henry B. González Convention Center’s Lila Cockrell Theater. One performance each year is reserved for the general public.

The popular Carnaval de San Anto dance troupe performances began in 1987. “The Fiesta Flambeau organizers called us and asked, ‘What can you do that’s fantastic?’” Catherine recalls. “We knew we couldn’t use lasers in a parade, so we created Carnaval as a new form of folk art with avant-garde influences.”

George describes the group’s sound as a combination of African, Brazilian, and other Latin rhythms. “Our two most popular dance rhythms are variations on son clave, which is the root of the famous Bo Diddley riff, and samba reggae, which combines elements of reggae and samba.”

The Cisneroses studied Brazilian and Caribbean traditions of parade music and dance at workshops around the country, including at San Antonio’s Carver Cultural Community Center. “Over the last 30 years, we’ve become most known for Carnaval,” Catherine says.

URBAN-15 also promotes the medium of film with two innovative events. Each fall, the URBAN-15 Studio is one of 300 venues worldwide—including Texas sites in Commerce, Houston, and Grapevine—that screen films as part of the annual Manhattan Short Film Festival, a New York City-based event dedicated to independent filmmakers. Audiences in San Antonio vote with others around the globe on their favorite selections, actors, directors, and other categories. 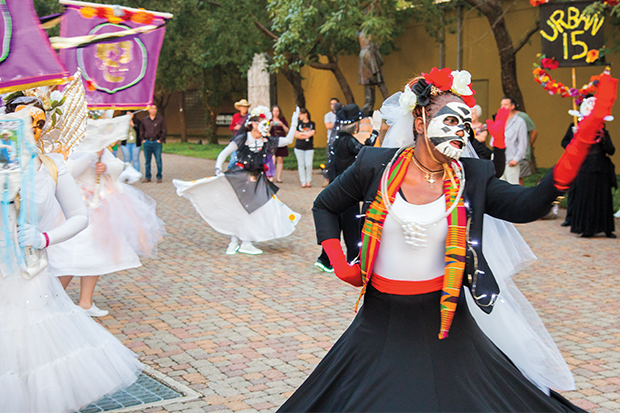 At the Josiah Media Festival, URBAN-15 invites entries from filmmakers age 21 or younger. The festival’s namesake, Josiah Miles Neundorf, was a San Antonio media artist who died of cancer at the age of 20 in 2006. “He was a friend of our cinematographer son, Antonio,” George says. “Josiah worked as a video editor at URBAN-15, and in 2005 he participated in our Nos Unimos community technology program, creating video slide shows of images of families from San Antonio’s West Side.” Last year’s three-day festival featured narrative, animated, documentary, and experimental films by 55 young artists from across the United States and from Australia, Denmark, Peru, Estonia, and Egypt.

Each April, URBAN-15 hosts the Mega Corazon Poetry Festival, which is recorded and streamed live on its website. “Our slogan for the program of live readings and performances by San Antonio’s most inspirational poets is ‘A poet in the hand is worth two in the book,’” George says.

This spring, George’s non-narrative sound installation, Cacophony, will convey a sonic history of San Antonio as part of the Witte Museum’s exhibition honoring the city’s 300th birthday. In addition to capturing audio produced by everything from horses to helicopters, George also recorded words in 17 San Antonio languages, from Lipan Apache to Korean. Inspired by composers like John Cage and Pierre Schaffer, the piece speaks clearly to one of contemporary art theory’s central tenets—that art is everything and everything is art. Few places embrace that maxim as fully as URBAN-15. 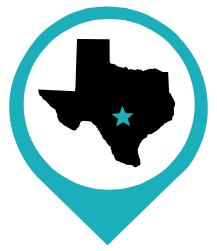 Agenda for the Arts

URBAN-15, located at 2500 S. Presa St. in San Antonio, produces a series of performances, events, and workshops throughout the year to engage people in the arts.

Hidden Histories
On the first Monday of each month in 2018, URBAN-15 will screen videos on family and community histories of San Antonio. The program is part of the city’s tricentennial activities.