The flickering excitement of restored moviehouses 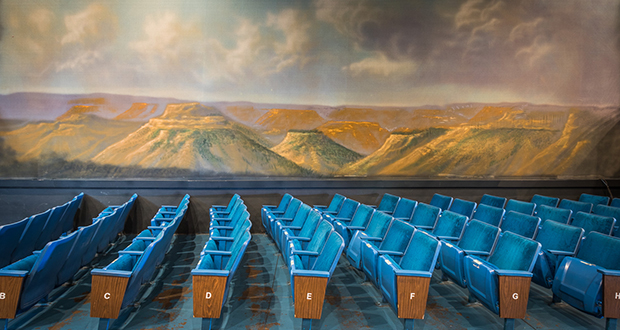 As Hollywood blossomed in the early 20th century, movie houses became the social and entertainment hubs of both small towns and big cities across Texas.

In Mason, the 1928 Odeon Theater shows first-run movies and hosts concerts in the same building where Walt Disney attended the 1957 premier of Old Yeller. Read more about the Odeon Theater online at texashighways.com.

But the advent of television’s free programming in the 1950s, a residential exodus to the suburbs, and the popularity of drive-in cinemas caused downtown marquees to go dark, one by one. As the movie industry shifted to multiscreen cineplexes in the 1960s, most downtown theaters were torn down or repurposed as hardware or clothing stores, storage buildings, day cares, non-denominational churches, and the like.

But in recent years, flickering excitement has returned to many of the historic downtown theaters across Texas. Some have been fabulously refurbished into world-class music venues, like The Kessler Theater in Dallas and The Heights Theater in Houston. In Greenville, the Texan Theater has been renovated as a classy dinner theater. Still other abandoned movie houses have been resurrected for their original purposes as first-run movie theaters, places where the town once again follows plotlines together in the dark.

Whether presenting bands, movies, or dramatic plays, these restored theaters not only provide entertainment for locals and visiting audiences. They also serve as anchors of local pride and community engagement. But such projects don’t come together without enough vision and hard work to resurrect an old building into something new again. 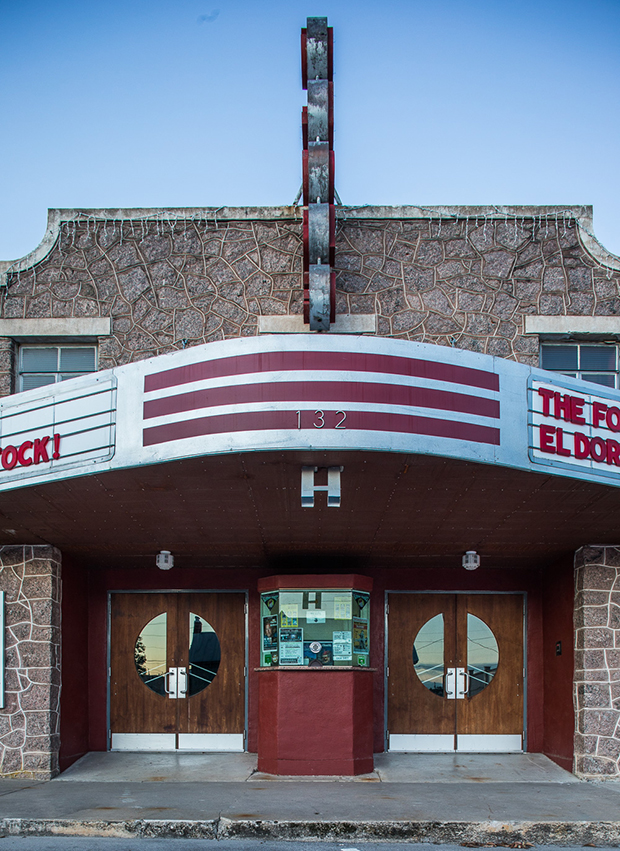 The Globe Theater in Bertram.

The Globe Theatre injected new life into downtown Bertram when it reopened in late 2015 after decades of dormancy. “When we started, we thought live music would be our thing, and we’d show movies on the side,” said Globe co-owner Lance Regier, who grew up in nearby Leander and played in high school bands with his business partner Zach Hamilton. “But the town really comes out for the movies, so we had to flip it around.” The Globe, which was built in 1935 from the same type of “sunset red” granite used to build the Texas Capitol in Austin, shows about four movies a month, while booking at least one concert and various private events each month.

Restoring the original marquee is usually a priority, so Regier and Hamilton were a little perplexed when they learned that the Globe’s vintage sign had disappeared in the ’90s. “We thought we’d have to build a new one,” said Regier, “but we got lucky.” After a tip, they found the Globe marquee on a goat farm outside of Bertram, buried under a mountain of junk. With a $10,000 grant from the Bertram Economic Development Fund, the Globe Theater’s original plumage was beautifully restored.

Some of these restoration projects have taken years to complete, without much financial return. The Globe took six years. Hamilton and Regier did much of the finish-out work themselves, and they took their time to do it right, finding recovered vintage theater seats in Tennessee and rescuing wood flooring from a 1930s Sears store in San Angelo for the stage. “It’s more than a hobby, but not a fulltime job,” said Regier, who works a desk job by day.

South of Interstate 10 in the cattle country of south-central Texas, schoolteacher Tammy Steinmann had been talking about bringing back Yoakum’s 1922 Grand Theater “since I started dating my husband 15 years ago.” A 1994 graduate of Yoakum High School, she knew from experience that the town needed “something for the kids to do.” Steinmann bought the building from a church, and with the aid of a $150,000 economic development grant from the city, restored the theater and reopened the Grand in September 2016.

From the sidewalk, the Grand’s lit-up art deco marquee makes it feel like we just got our boys back from Korea. But the reclaimed movie theater, which operates Thursday through Sunday, has a modern interior with high-back gray chairs and red-and-black theater curtains lining the walls to enhance the room’s acoustics. Steinmann uses the same Barco digital projector found at multiplexes. The Grand screens free movies on Wednesdays in the summer, and in February, it will host its first theatrical production—the Main Street Theater of Houston’s Junie B. Jones is not a Crook.

“There’s a lot of history being brought back,” Steinmann said. “We’re always having couples tell us they had their first date at the Grand 40 or 50-something years ago. They bring their grandchildren now.” 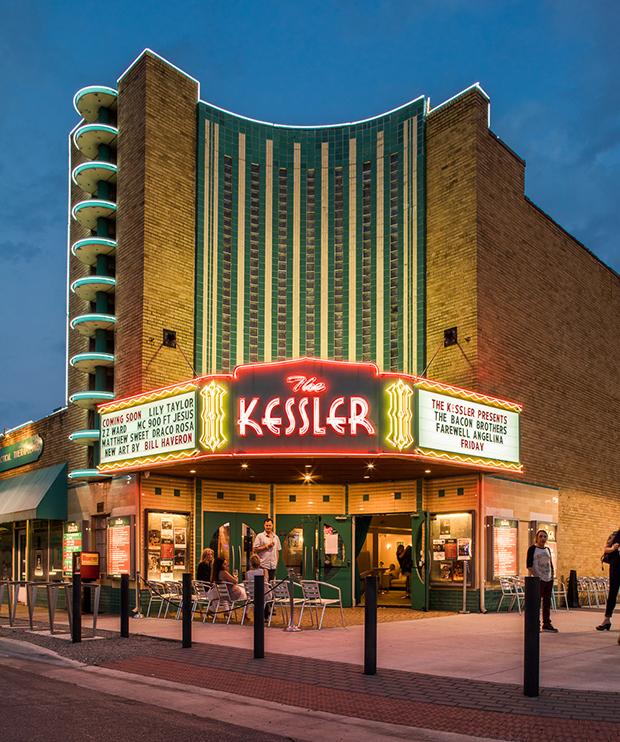 The Kessler Theater in Dallas.

The Kessler and The Heights theaters, Dallas and Houston

In this new revival of old theaters, the great stories aren’t just on the screen or in song. There’s the one about Edwin Cabaniss, who left his position as a Dallas investment banker to bring quality live music to the long-dormant Kessler Theater in the Dallas neighborhood of Oak Cliff in 2010. Six years later, he did the same thing with the Heights Theater in Houston.

Both the Kessler and the Heights were rebuilt as live music venues for national and regional touring acts. The Kessler’s renovation included leveling the sloped floors—in part because Edwin’s wife, Lisa Cabaniss, runs a dance studio for kids in the building during the day. And when Cabaniss had $60,000 left in his budget to open the doors, he decided to spend it on a powerful sound system.

“You know that story about how Cortez burned his boats so he couldn’t go back? I had that moment of no retreat about two years in,” said Cabaniss, who traded his business suit for a black cowboy shirt with pearl buttons. 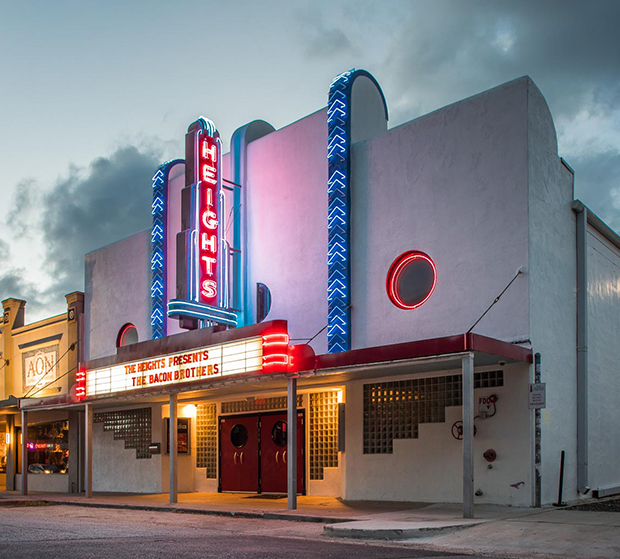 The Heights Theater in Houston.

The show that helped convince Cabaniss he had something special with the Kessler was the Dallas return of Annie Clark, better known as St. Vincent, in October 2011. The two wildly received sellouts got the attention of not only Dallas music fans, but also national booking agents. Suddenly, the Kessler was the hot room in Texas because of its intimacy and attentive audiences. After you’ve seen an act at the Kessler or the Heights—which are nearly identical inside—it’s hard to see them at a nightclub or a festival.

“Everybody kept telling me, ‘you’ve gotta bring the Kessler concept to Houston,’” said Cabaniss, who likes to greet his customers when he’s in town. Before a recent Bob Schneider show at the Heights, Cabaniss shook hands and answered questions from customers, who welcomed the infusion of energy that the Heights has brought to 19th Street.

As with the Kessler, no vantage point in the rectangle-shaped Heights Theater is more than 30 yards from the stage. “We knew from the Kessler what an old theater can mean to a community,” Cabaniss said. 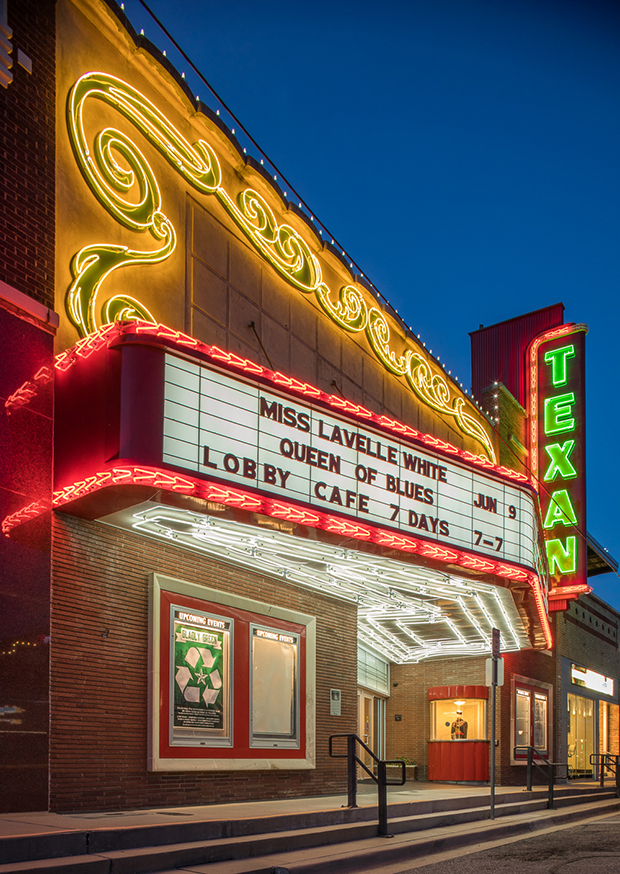 The Texan Theater in Greenville.

Greenville native Barbara Horan sought to provide “entertainment as it should be” with her renovation of Greenville’s Texan Theater, which was built as an opera house in the 1890s. (Houdini played here!) Sick of going to shows where she was jostled by crowds, stuck in lines, and obstructed from the stage, Horan designed the Texan as a VIP experience in a beautiful building with pristine sound. Such treatment isn’t cheap. Most tickets cost $100 to $200, which includes a four-course dinner with table service. Drinks are also available.

It may take time for the Texan’s approach to catch on in a town of only 26,000, but the marquee’s neon lights, which shine all night, even when there’s not a show, announce a rejuvenation of the entire community. The Texan’s arrival complements Greenville’s growing list of downtown draws, including the Corner Street Pub next door and Landon Winery & Bistro nearby.

“Greenville has come alive,” said Francis Bouknight, who attends many shows at the Texan. Whether it’s country music (Tracy Byrd, Jason Boland), oldies acts (Village People, Shirley Jones), folk/blues (Ruthie Foster, Guy Forsyth) or a theater production, Bouknight has been there. She even came out the
night Donny Most (Ralph Malph from Happy Days) crooned Sinatra and Dean Martin. “We can’t drive into Dallas to see a show,” Bouknight’s friend Ann Weeks said, “so the Texan is a godsend.”

Horan was so keen on restoring every original detail of the Texan, including the terrazzo floors, that she bought the building next door to add new restrooms. She also opened the Texan Lobby Café, a coffee shop open seven days a week serving soups, salads, and sandwiches.

Horan said the project stemmed from her desire to save the Texan’s neon marquee, the only one remaining of six old theaters in downtown Greenville. “So I saved the neon, and everything else snowballed,” she said. 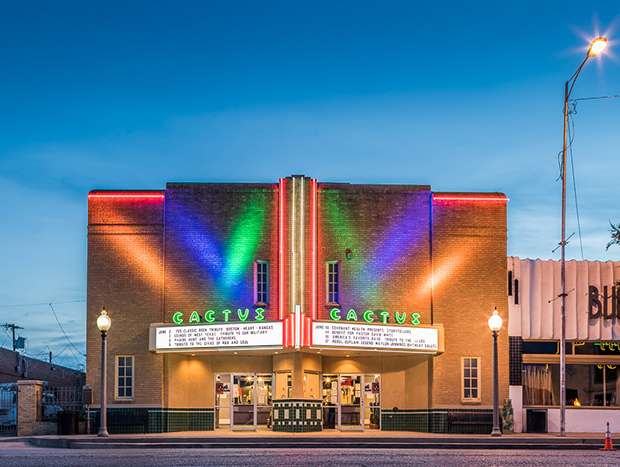 Up in the Panhandle, record producer Don Caldwell intended to create a new music venue for local talent and touring acts like the Flatlanders (originally from Lubbock) when he brought the 1937 Cactus Theater back to life in 1994. After the Cactus closed in 1958, it was gutted and used to store scrap iron. While restoration was out of the question, Caldwell rejuvenated the theater, including hiring John Russell Thomasson to paint a wrap-around mural of caprock canyons beneath blue skies.

“The Cactus is one of the coolest places we’ve ever played,” said former Joe Ely drummer Davis McLarty, now an Austin-based booking agent. “The crowd is right up there with you, so there’s a lot of energy to go with the intimacy. And that mural is out of this world.”

Lubbock entrepreneur Darryl Holland, owner of Holly Hop Ice Cream Shop, bought the 400-capacity Cactus in 2016. Holland’s all-star house band, the Rhythm Machine, does special themed nights, covering soul/R&B one night and ’50s rock’n’roll the next. Holland enhanced the Cactus marquee with new lighting and upgraded the Cactus’ sound system and expanded its cinema capability. “With a flick of a button, we can go from a live band onstage to a classic film on the screen,” he said.

The entrepreneurs behind all of these theaters took them on mostly as passion projects, intent on resurrecting classic movie house structures for modern times. But they’re not immune from feasibility. “It’s all about knowing your clientele and programming accordingly,” Cabaniss said. “My background is in analytics, so I did a lot of research. I had to balance my creative side, which was telling me to go for it, with the financial side, which was asking, ‘Is this business model going to work?’”

“I went from thinking I was just going to do something nice for the neighborhood,” said Cabaniss, “to wondering if this was what I was destined to do with my life.”

The author of All Over the Map: True Heroes of Texas Music, Michael Corcoran says his favorite show in a restored theater may have been John Prine at Austin’s Paramount Theatre in 1985. The opening act—an unknown named Lyle Lovett—pretty much stole the show. Austin photographer Jeff Wilson has worked photo jobs as diverse as the Texas House of Representatives and the Texas DPS Crime Lab.