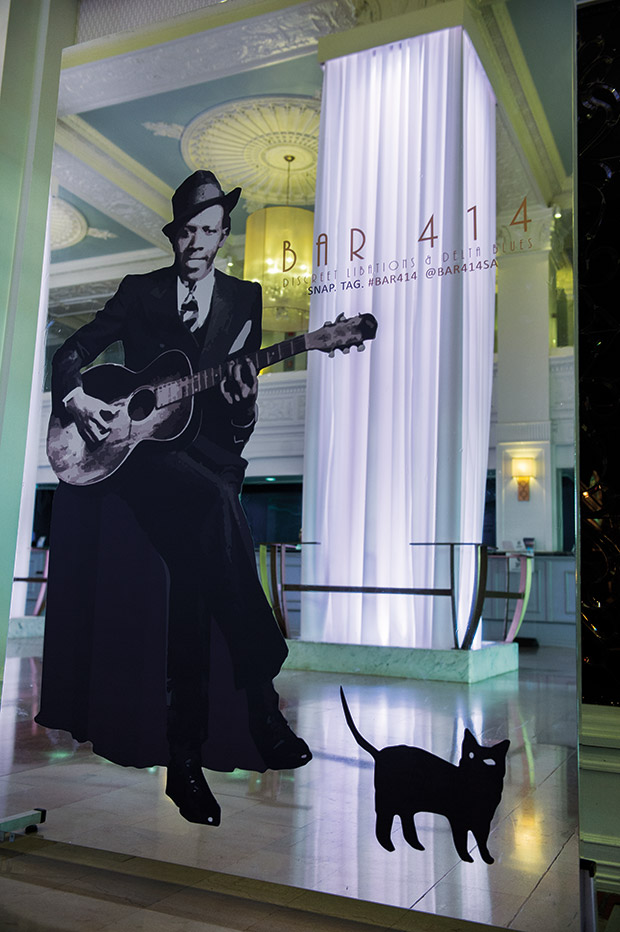 Arguably the most monumental date in the history of recorded music in Texas was November 23, 1936, when Robert Johnson created the template for electric blues, which became rock-and-roll, in Room 414 of the Gunter Hotel in San Antonio.

Learn more about Robert Johnson’s 1937 Dallas recordings and the project to renovate 508 Park Ave. at www.508park.org and www.encoreparkdallas.org.

The mysterious Mississippi bluesman cut eight tracks for the American Recording Company that day, including “I Believe I’ll Dust My Broom” and “Sweet Home Chicago,” both of which became classics. Johnson returned to the Gunter a few days later to lay down “Cross Roads Blues,” which British supergroup Cream would make famous as “Crossroads” 30 years later.

Johnson was “the greatest blues singer who ever lived” according to Eric Clapton, and he ranks No. 5 on Rolling Stone’s list of all-time great guitarists. Yet the Delta bluesman died poor and obscure in 1938 when he was 27 years old—allegedly poisoned by a jealous husband.

Recognizing Johnson’s cultural significance, the Sheraton Gunter Hotel is doing its best to keep alive the spirit of its influential former guest. The Gunter opened in 1909, a block from the San Antonio River, and sits in the thick of downtown. A 2014 renovation included the installation of a large, mirrored portrait of a nattily attired Johnson, a black cat crossing his path, to greet visitors in the lobby.

Also in the lobby, a historical plaque dedicated by the San Antonio Blues Society in 2001 commemorates the Johnson sessions, and the group maintains two window boxes with Johnson photos and album art. Bar 414, the hotel’s speakeasy-themed lounge, is decorated with abstract photos of Johnson (only two photos of the bluesman are known to exist) and names some of its cocktails after Johnson’s classic blues numbers. There’s the “Come On In My Kitchen” (gin and grapefruit), “I’m a Steady Rollin’ Man” (a whiskey sour variation), “Terraplane Blues” (a Moscow Mule), and “Hellhound On My Trail” (a Mai Tai), among others. Bar 414’s soundtrack is strictly blues—a mix heavy on Johnson and those he influenced, like Muddy Waters and Albert King—and the bar occasionally hosts blues musicians.

Back in 1936, producer Don Law, who ran ARC’s Dallas office, converted Room 414 into a studio, setting the soundboard in the bedroom and placing the musicians in the parlor. He recorded nearly a dozen acts the same week as Johnson’s recordings. Among them were Al Dexter, whose “Honky Tonk Blues” was the first country song with that subgenre in the title, and the country gospel Chuck Wagon Gang, who outsold Johnson on Columbia until a 1990 reissue of Johnson’s King of the Delta Blues Singers went platinum.

Until fairly recently, few people knew about Johnson’s connection to the Gunter. There were no photos or sign-age; “414” was what a bagel and a coffee might cost, with tax, in the hotel café. But since the Rolling Stones, who have recorded such Johnson tunes as “Love In Vain” and “Stop Breaking Down,” played their second-ever United States show in San Antonio in June 1964, British bands have made pilgrimages to the Gunter, if only to ride the elevator to the fourth floor and run their fingers over the room’s placard.

Hoping to channel Johnson’s musical spirit, at least two acts have recorded in Room 414 in recent years, including John Mellencamp in 2009 for the album No Better Than This. The 475-square-foot parlor with high ceilings has a couch but no bed; a door connects the parlor to the bedroom in Room 413. Anyone can request the room. “People have always asked to stay in room 414,” said hotel Manager Tim McDonald, “but it’s only been since the new owners took over [Axle Capital Group in 2013] that we’ve emphasized our place in music history. It’s a great selling point.”

Gospel and blues singer Steve Johnson wasn’t just looking for musical roots when he came to the Gunter in November 2015. “I first became aware of Robert Johnson’s music from the Blues Brothers movie,” said Steve, of Crystal Springs, Mississippi. “I came out of it singing ‘Sweet Home Chicago,’ and my grandma said, ‘Your grandfather wrote that song!’”

The 15-year-old Johnson was stunned. “I only knew that my real granddaddy was a blues singer named Robert Johnson. I didn’t know his music went anywhere,” said Steve, now president of the Robert Johnson Blues Foundation.

Steve Johnson’s singing had been strictly gospel until the past few years, when he started delving into his grandfather’s music as leader of the Robert Johnson International Blues Revue. Steve’s father is Claud Johnson, who was named Robert Johnson’s sole heir in 1998 after a lengthy court battle. Claud Johnson passed away in June 2015.

“I’ve been thinking about recording an album in Room 414 for awhile,” Steve said in November. “This room is a big part of musical history, but it’s also part of my family’s history, and I felt something special the very first time I stepped inside here,” he added. “There was such a closeness to the granddaddy I’d never met. My father was only six when his father passed away.”

Steve came to Room 414 mainly to record vocals. He placed his mic in the corner, facing away from the engineer, just as his grandfather famously did. “The producer [Don Law] said it was because Robert Johnson was shy, had stage fright,” Steve said. “But listen to this.” Steve sang, “C’mon, baby don’t you want to go” in his booming voice—and, indeed, the corner sound reflection gave it a natural reverb.

“I came to the Gunter because I want him to be a part of what I’m doing,” Steve said, adding that he sometimes felt his grandfather in the room, watching him.

Robert Johnson enjoyed moderate success with his first single, “Terraplane Blues,” which he recorded at the Gunter. His commercial promise prompted American Recording Company to invite him back to Texas for a recording with the company’s Brunswick/Vocalion label, this time in Dallas. The June 1937 recordings took place in a makeshift studio on the third floor of 508 Park Avenue, an Art Deco building just a few blocks from today’s City Hall. Johnson died not much more than a year later.

The Stewpot, a community ministry of First Presbyterian Church of Dallas, acquired 508 Park Avenue in 2011 and is in the process of renovating it into a cultural center with museum exhibits, a recording studio, art studio, amphitheater, and community garden—all themed around the building’s musical legacy. With exhibits scheduled to open over the next couple of years, 508 Park Avenue is sure to be another must-visit spot for Robert Johnson fans—just as British Invasion bands continue to make an obligatory stop at the Gunter whenever passing through San Antonio.

The Gunter is across the street from the 1929 Majestic Theatre, where Cheap Trick recently played and came over afterwards to pay their respects. The Yardbirds made a similar visit last year, said Steve Schnipper, treasurer of the San Antonio Blues Society.

Each November, the Blues Society hosts the Robert Johnson S.A. Sessions concert at Sam’s Burger Joint to commemorate the historic San Antonio recordings of 1936. The show typically consists of a couple of local acts and a headlining national act that’s been strongly influenced by Robert Johnson—blues musicians such as Guy Davis, Rory Block, Charlie Musselwhite, and Guy Forsyth. Blues bands are drawn to the concept of honoring Johnson in the city where he first recorded, Schnipper said, even if the local connection remains relatively unknown in San Antonio.

“It’s truly a shame that most people in San Antonio have no idea of how closely San Antonio is tied to recorded blues music history,” Schnipper said.