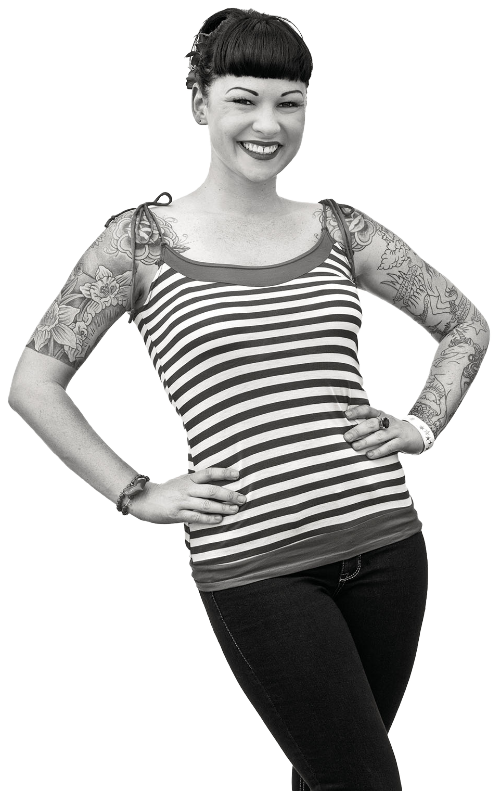 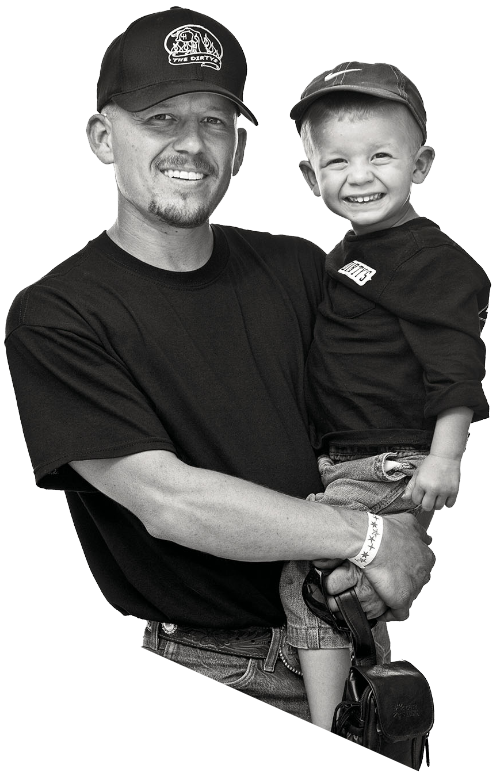 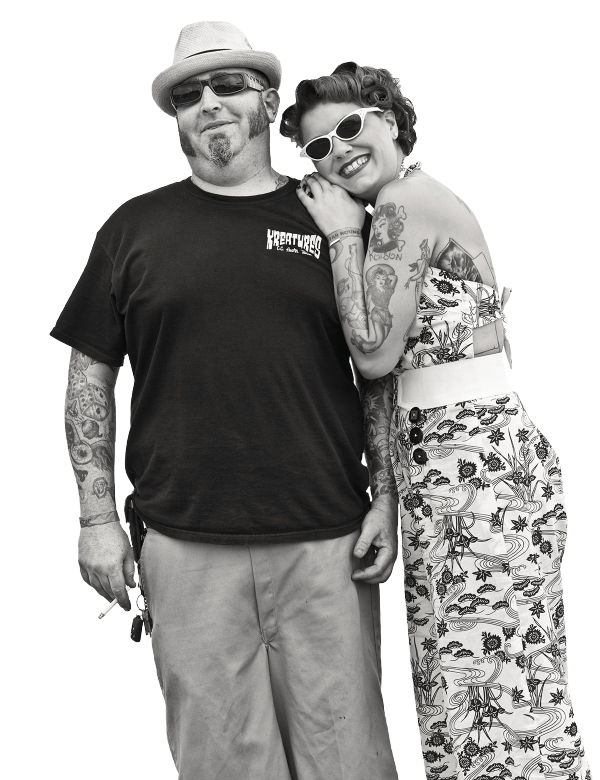 Hot-rod enthusiasts are as
distinctive as the cars they love

Photos, clockwise from top left: Cristien Neitch, a nurse from Austin; Rusty Burford, owner of Dirty’s Speed Shop in Seagoville, with son Ryder Burford; Matt Williams of Austin says his favorite part of the Lonestar Round Up is that “there is truly a home for all people, all cultures, all colors, all ages, scholars and deadbeats, squares and tattoo heathens, old and young, judges and criminals alike.” His wife, Wendi Williams, agrees: “Anyone and everyone is there to shake a hand or lend a hand,” she says.

Car pictured is a 1951 Ford Deluxe 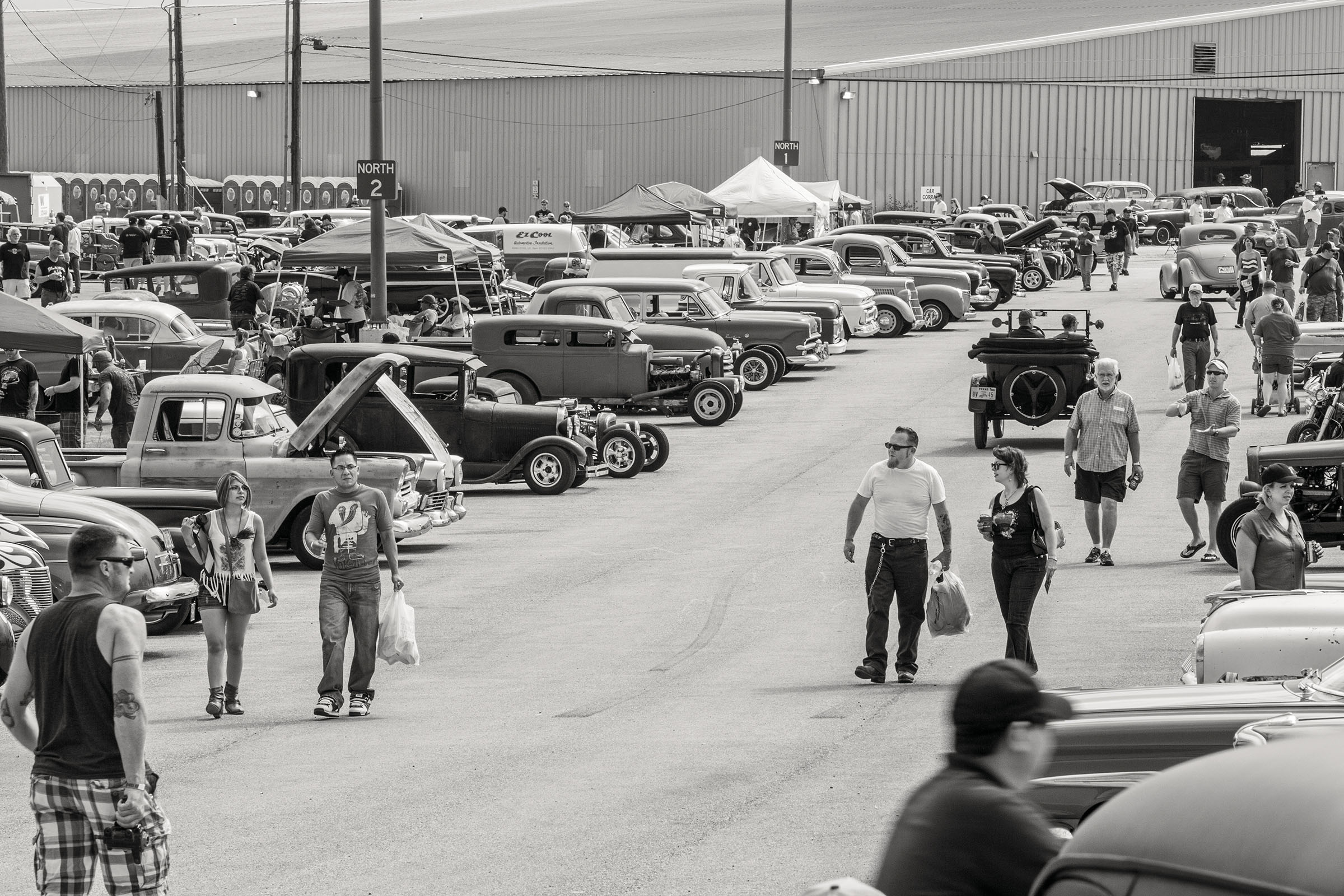 Brian Auderer remembers visiting his grandparents in Beaumont as a kid in the 1970s and becoming enamored with his grandmother’s 1950s Plymouth. Back home, his family had a boxy station wagon, but the Plymouth was all chrome and curves and baubles. “There was something about the joy of that design era, the positivity,” he says. “It was something I I wanted to be near.”

Erin Riddle, a pinup photographer from Temple, with her dog, Chloe

Today, the Austin-based designer and illustrator is a producer of the Lonestar Round Up along with other members of The Kontinentals car club. The Austin festival, which celebrates 20 years in April, lures hot-rod and custom-car aficionados from all over the world, including Australia, Norway, and Japan. The festival only features cars manufactured before 1963. What qualifies these cars as hot rods is the work individuals put into them to make them fast, from installing V-8 engines to stripping excess features. Custom paint jobs make the garage creations even more photogenic. The festival attendees tend to be just as vibrant. Some go for a rockabilly or pinup look to match the era the cars are from; others are old-timers with grease under their fingernails who are more interested in mechanics than aesthetics.

Austin photographer George Brainard grew so attracted to the scene that for six years he set up a studio near the entrance of the festival, where he asked interesting looking visitors to sit for him. Brainard released the portraits, plus photos of the cars and festival, in his 2015 book, All Tore Up: Texas Hot Rod Portraits.

He first took photos at the 2003 event, at Auderer’s behest, to help promote the festival. Once the festival became self-sustaining, Brainard showed up on his own. “There was great music and tons of cool people and all these cool cars,” he says. “I was hooked. I kept going back.” His photos, shot in black and white, capture fascinating details, from intricately carved belt buckles to scraggly grays in long beards to perfectly applied winged eyeliner. “Being a portrait photographer is all about making a connection with a person,” Brainard says. “It can be very intense with people you might only know for three minutes. Then you spend hours studying their face as you look through all the photos.”

For Auderer, the portraits allowed him to get to know the people who attended his event. “It’s fascinating to see into all the different stories there,” Auderer says. “They’re all interested in this thing, but they’re all wildly different from each other.”

Here, we showcase some previously unpublished photos from Brainard’s collection that capture the essence of hot-rod culture—the nostalgia, the ingenuity, and the style. “It really is a classic American art form,” Auderer says. “It wasn’t companies. It was individuals in their garages making these cars. No two are alike.” 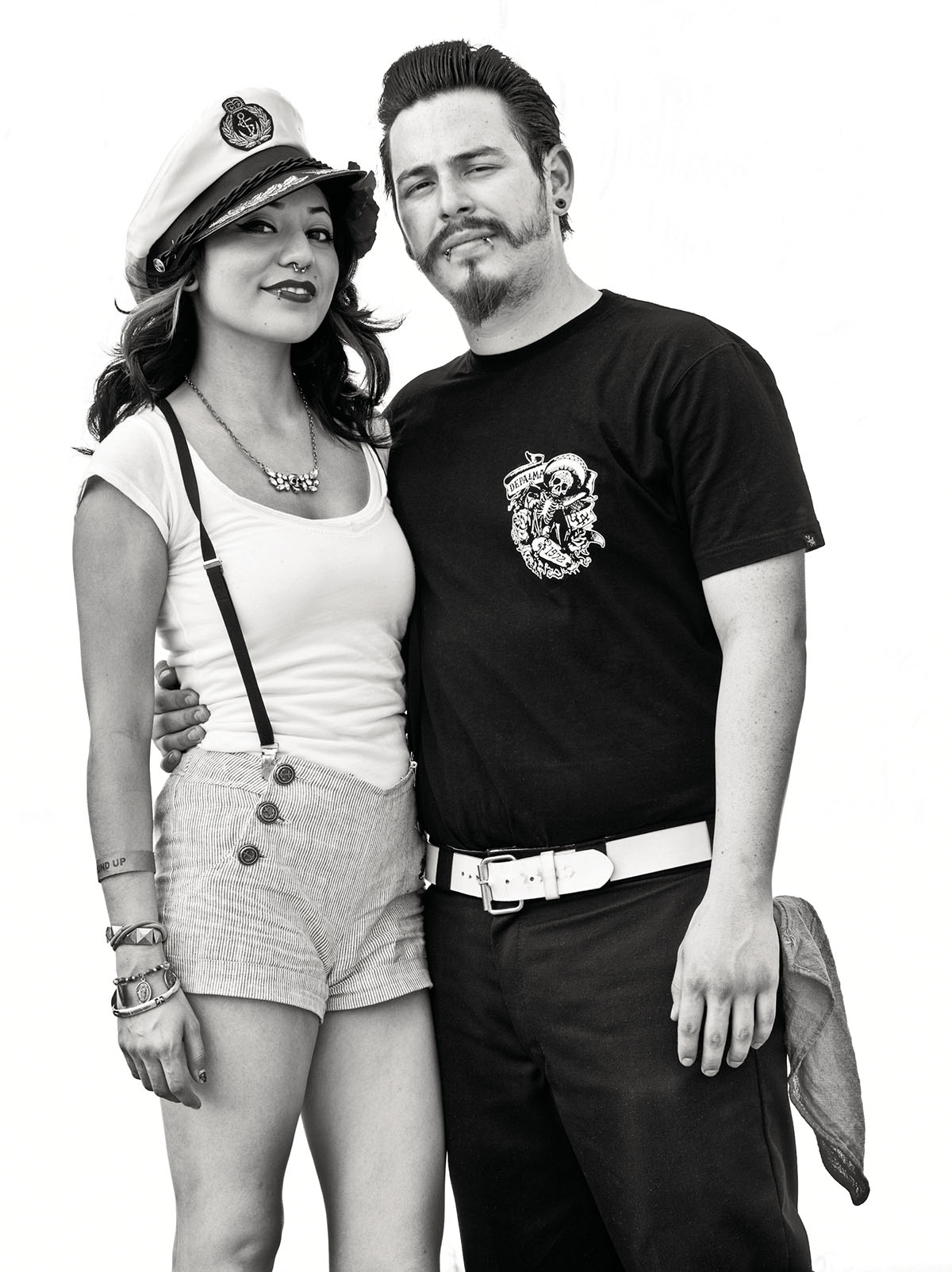 Cori Aguilar, Houston: “I got into car culture when I started dating Gabriel Alanis 10 years ago. He is a car guy himself and has a ’53 Chevy he’s been working on. Every person who owns an old-school car knows that it truly takes blood, sweat, and tears to get their dream car customized how they envisioned. It’s about respect, admiration, traditions, and the preservation of mobile treasures.” 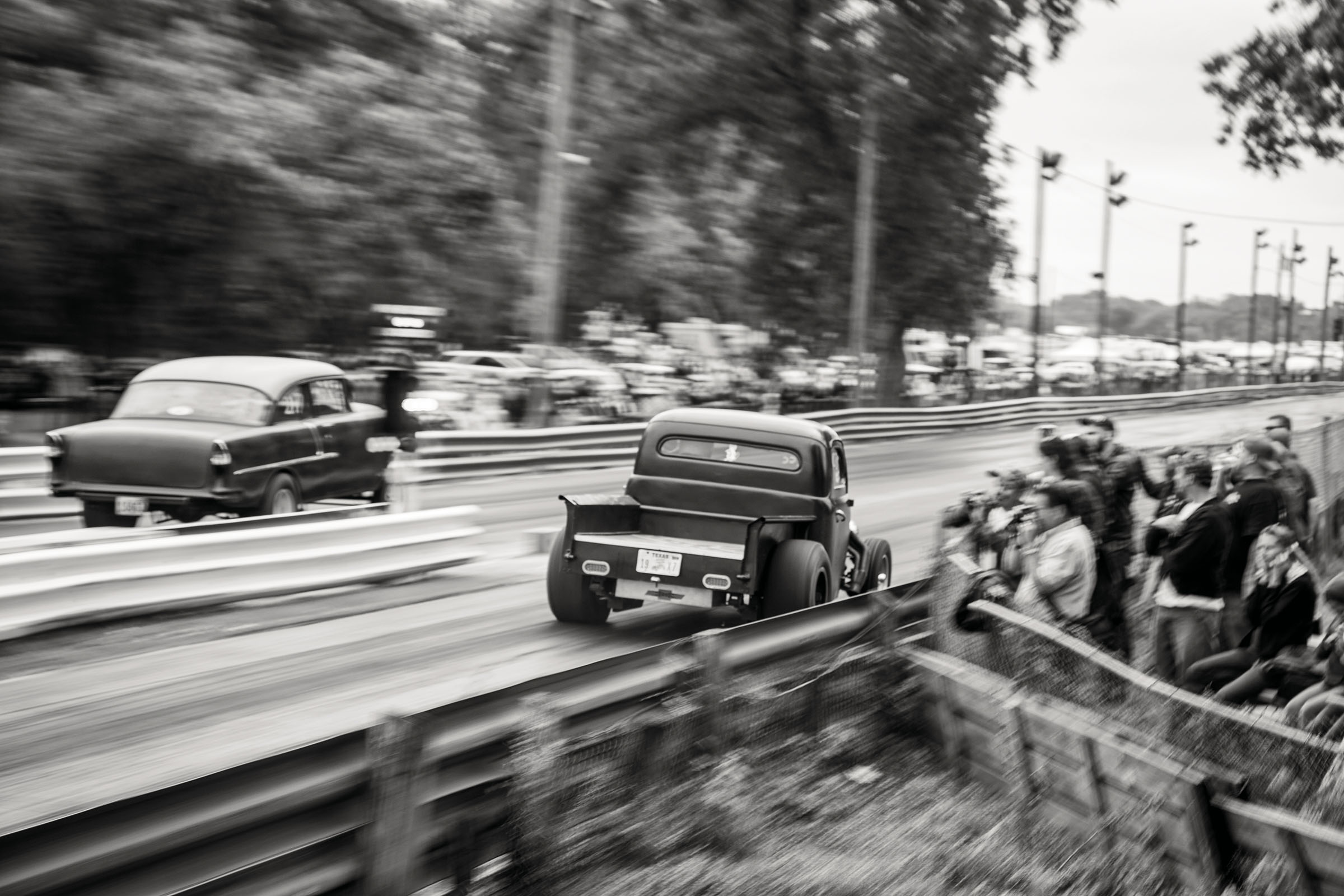 From 2002 to 2016, The Kontinentals, the car club that puts on the Lonestar Round Up, also hosted a drag-racing event called The Day of the Drags at Little River Dragway in Holland, just east of Salado. Here, a 1955 Chevy, left, pulls ahead of a Chevy truck at the 2012 event. 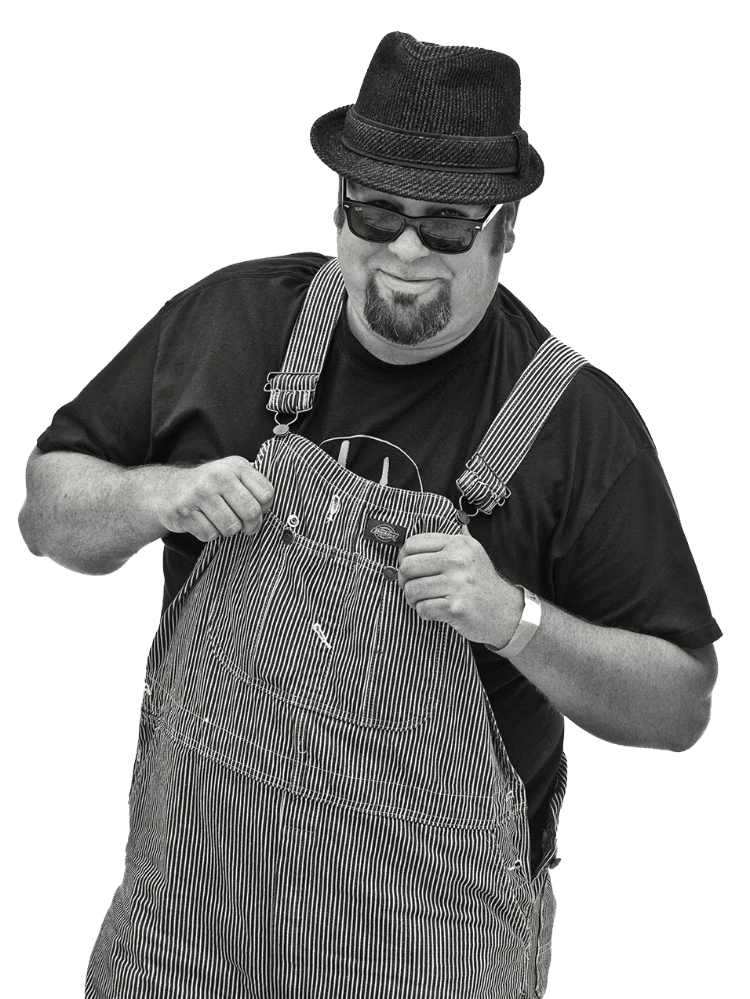 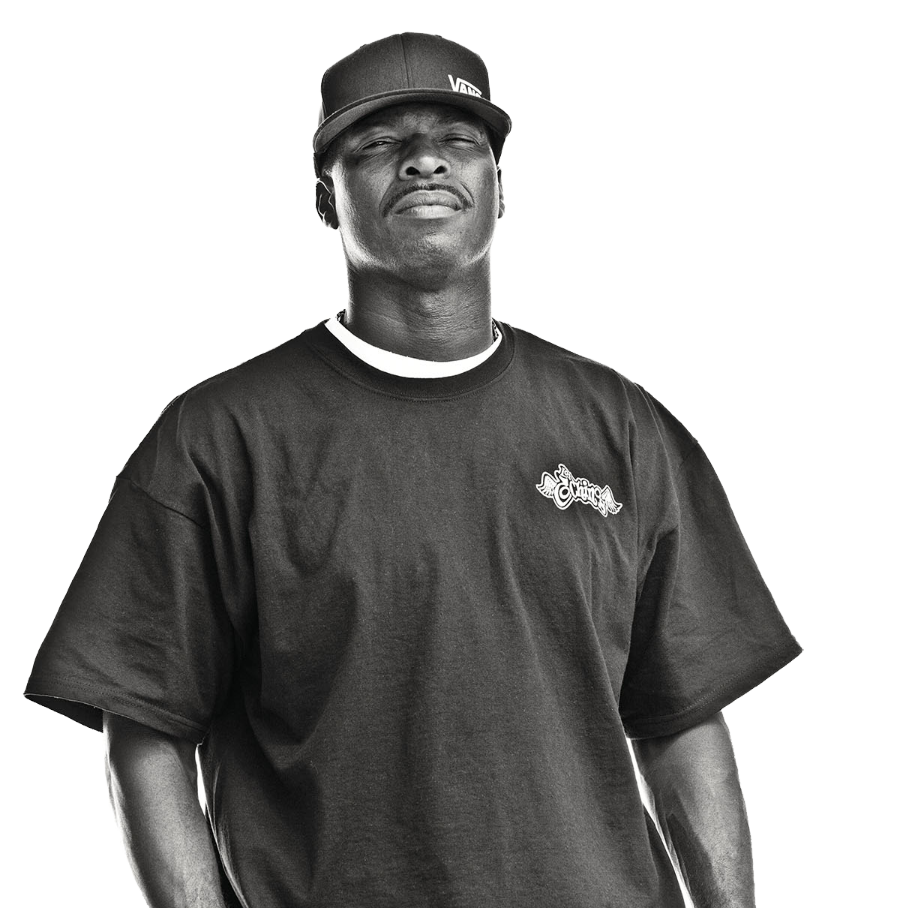 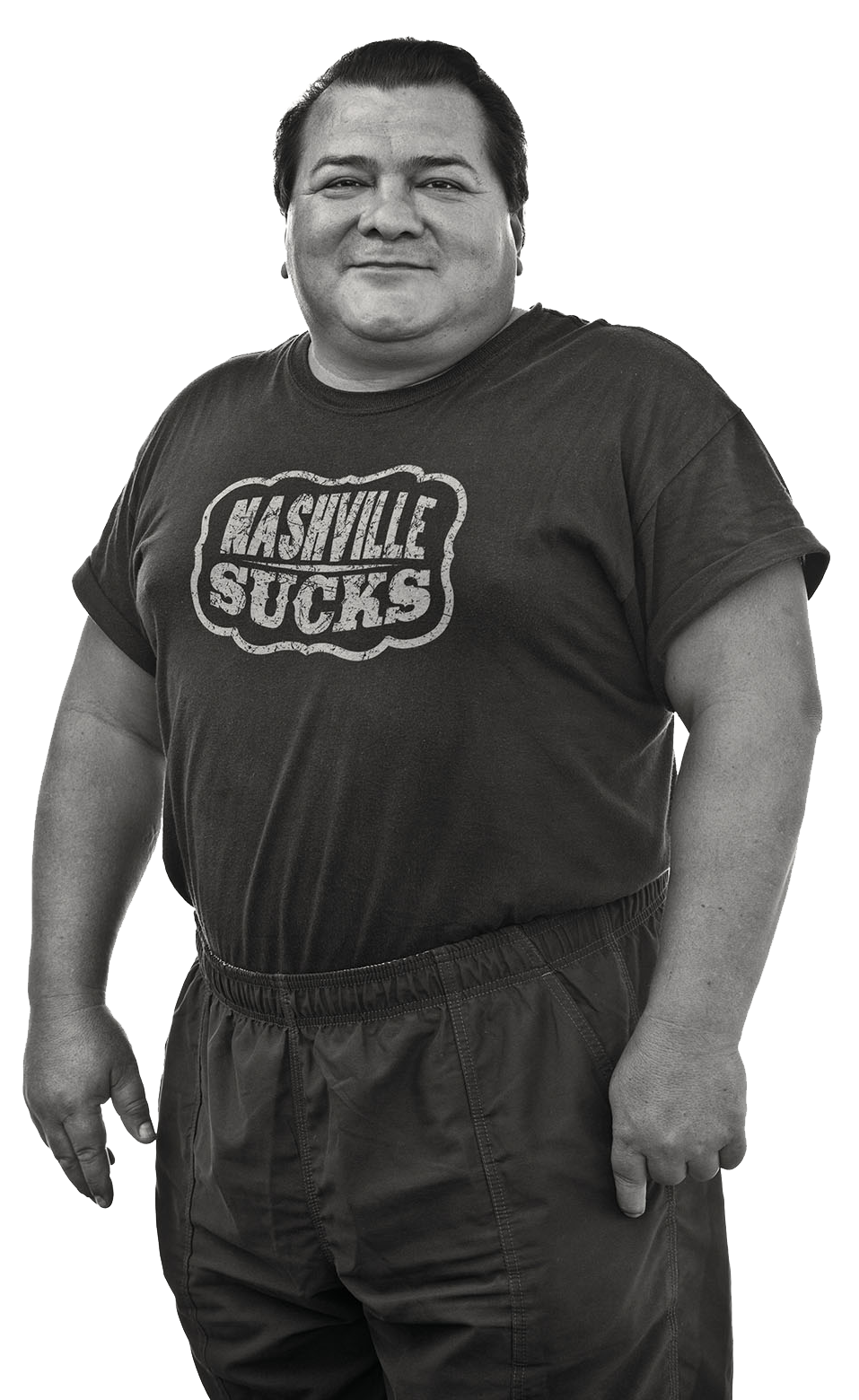 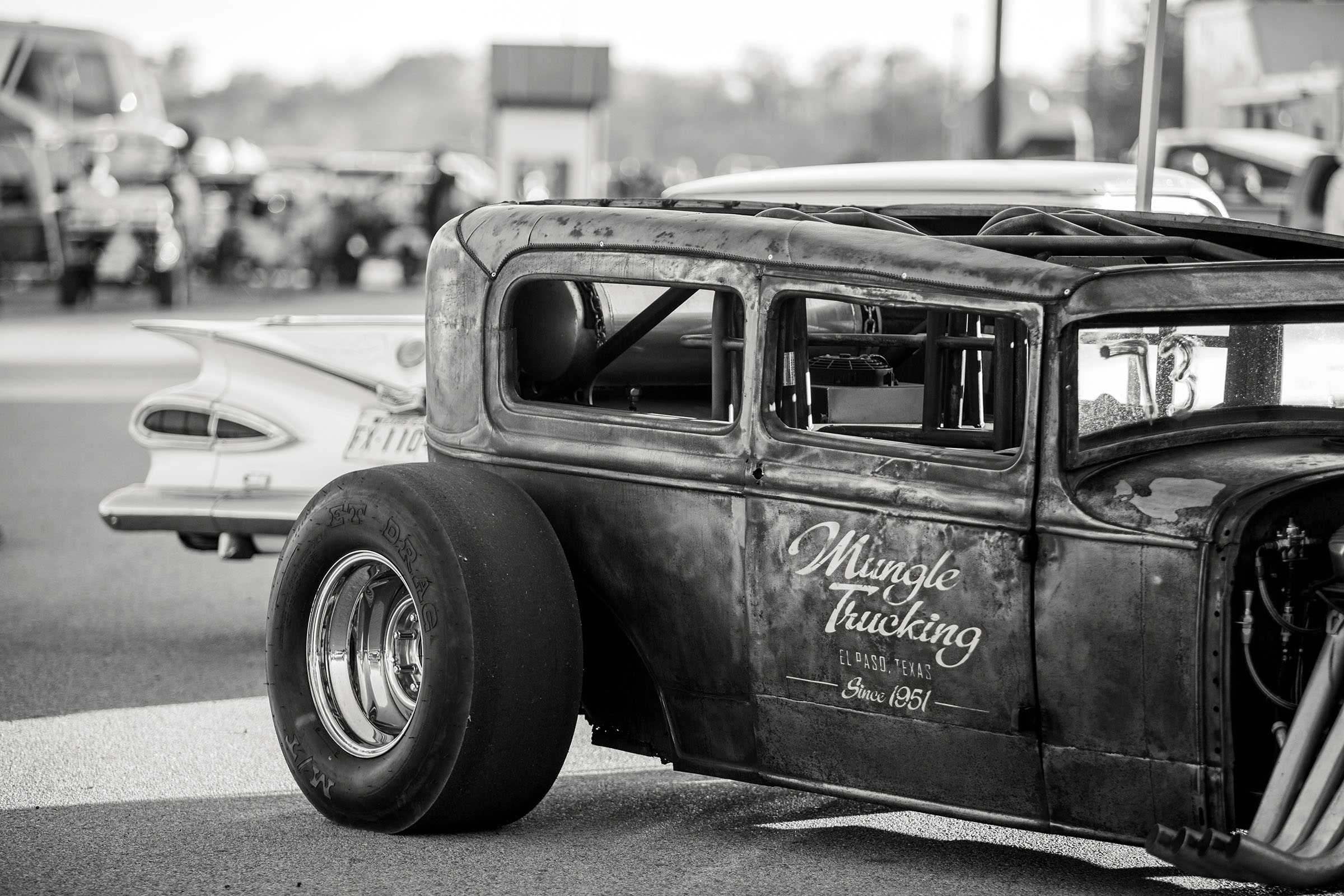 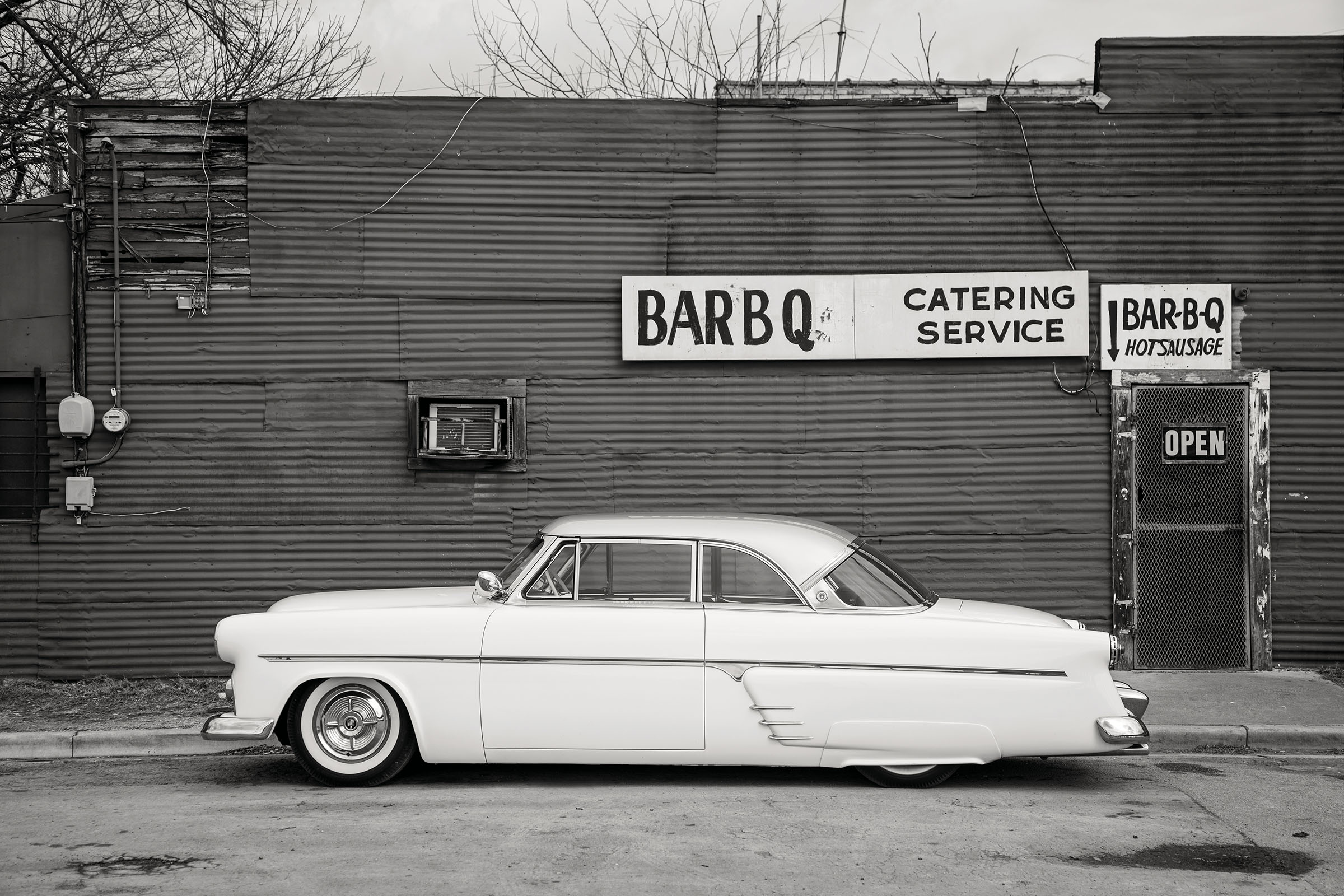 A 1954 Ford Victoria owned by musician Jimmie Vaughan in front the Taylor Café in Taylor. 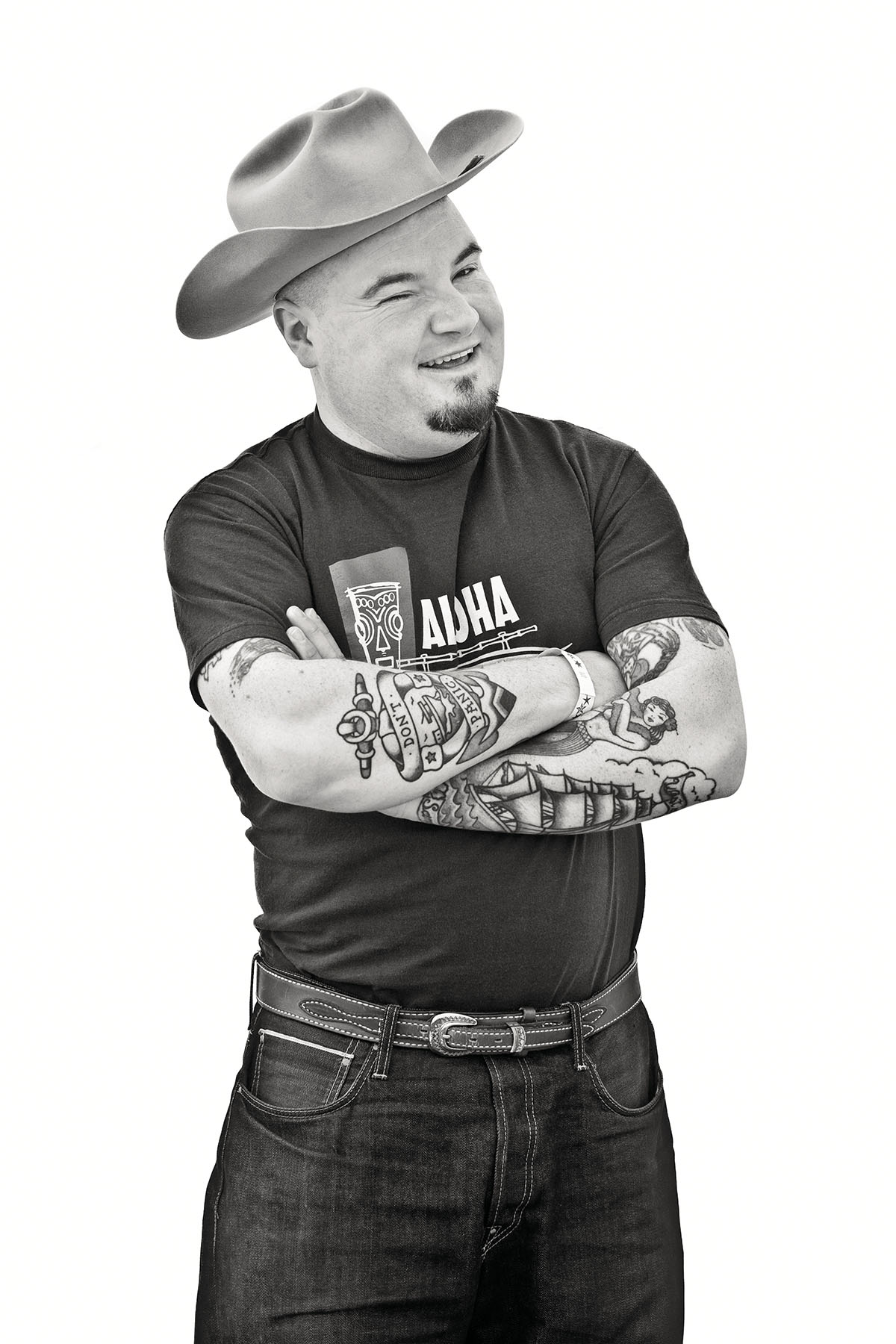 “I was first exposed to custom culture at the Hemsby Rock ’n’ Roll Weekender in England in the early ’90s,” Austinite and DJ Paolo Bortolomiol says. “It’s the fantasy of living the same hot-rod culture that was in the ’50s: lots of booze, girls, cars, and the smell of gasoline in the air.” 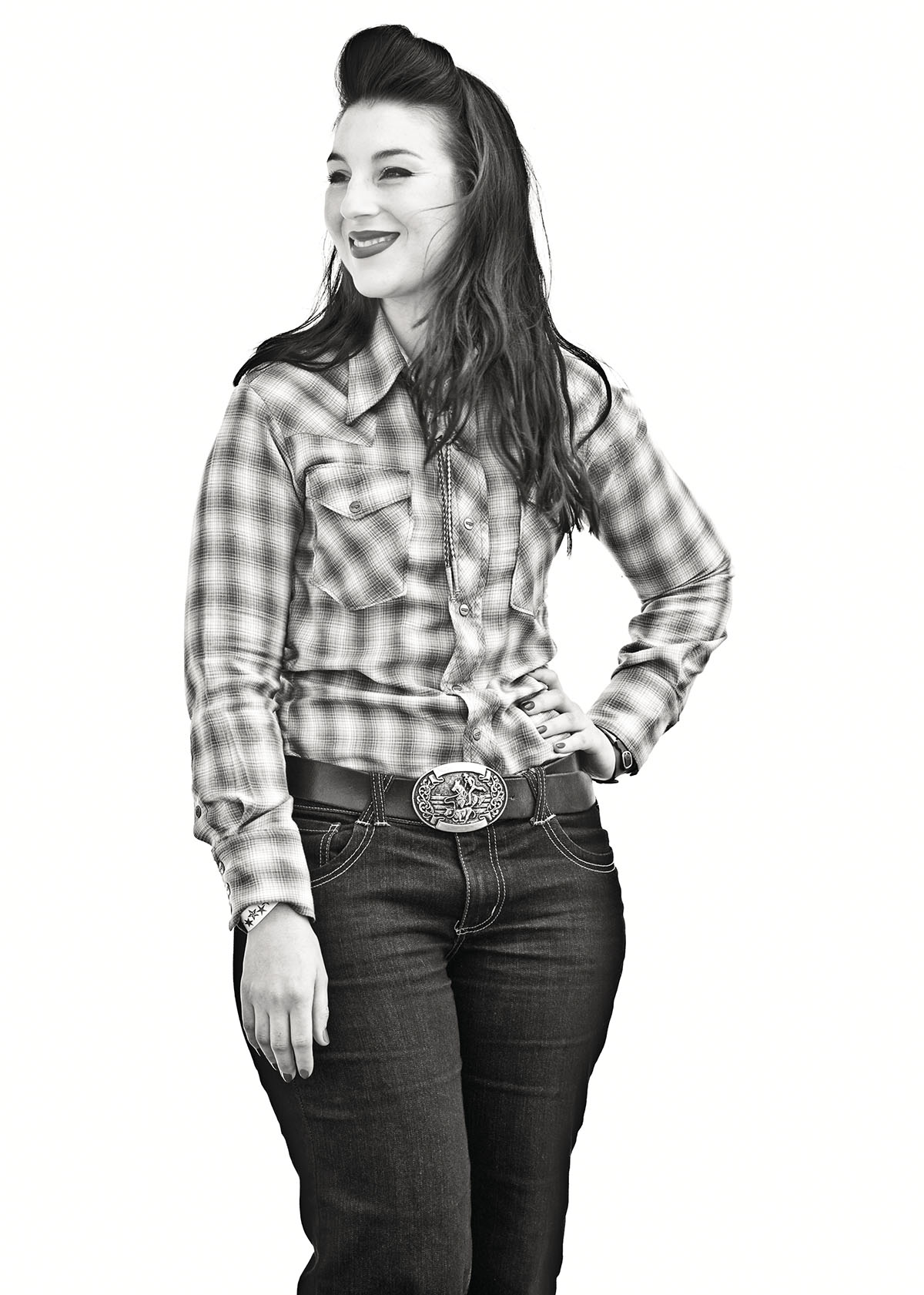 Sophie Camilleri from Melbourne, Australia, described herself to photographer George Brainard as “an Aussie girl that’s fallen in love with Austin.” 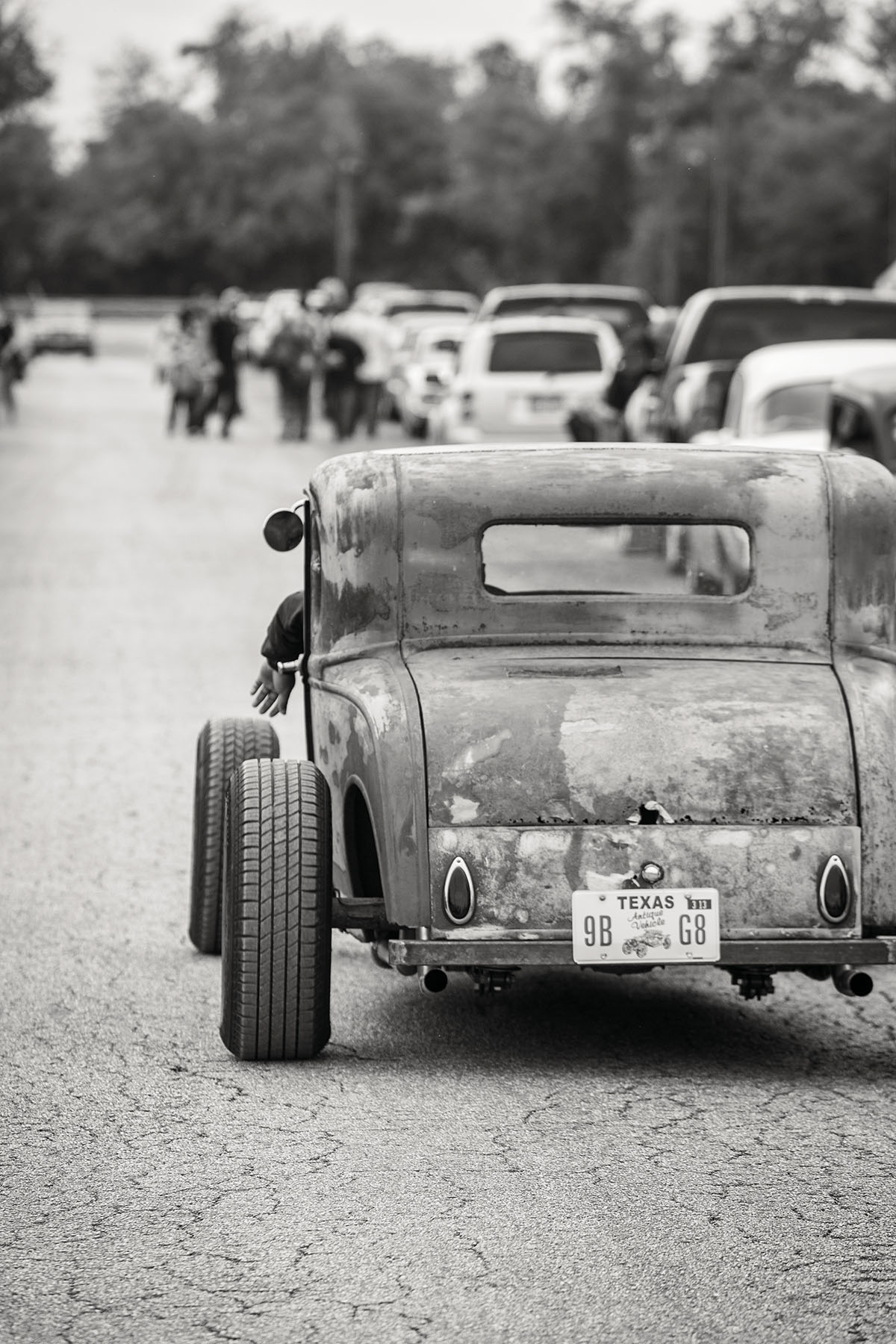 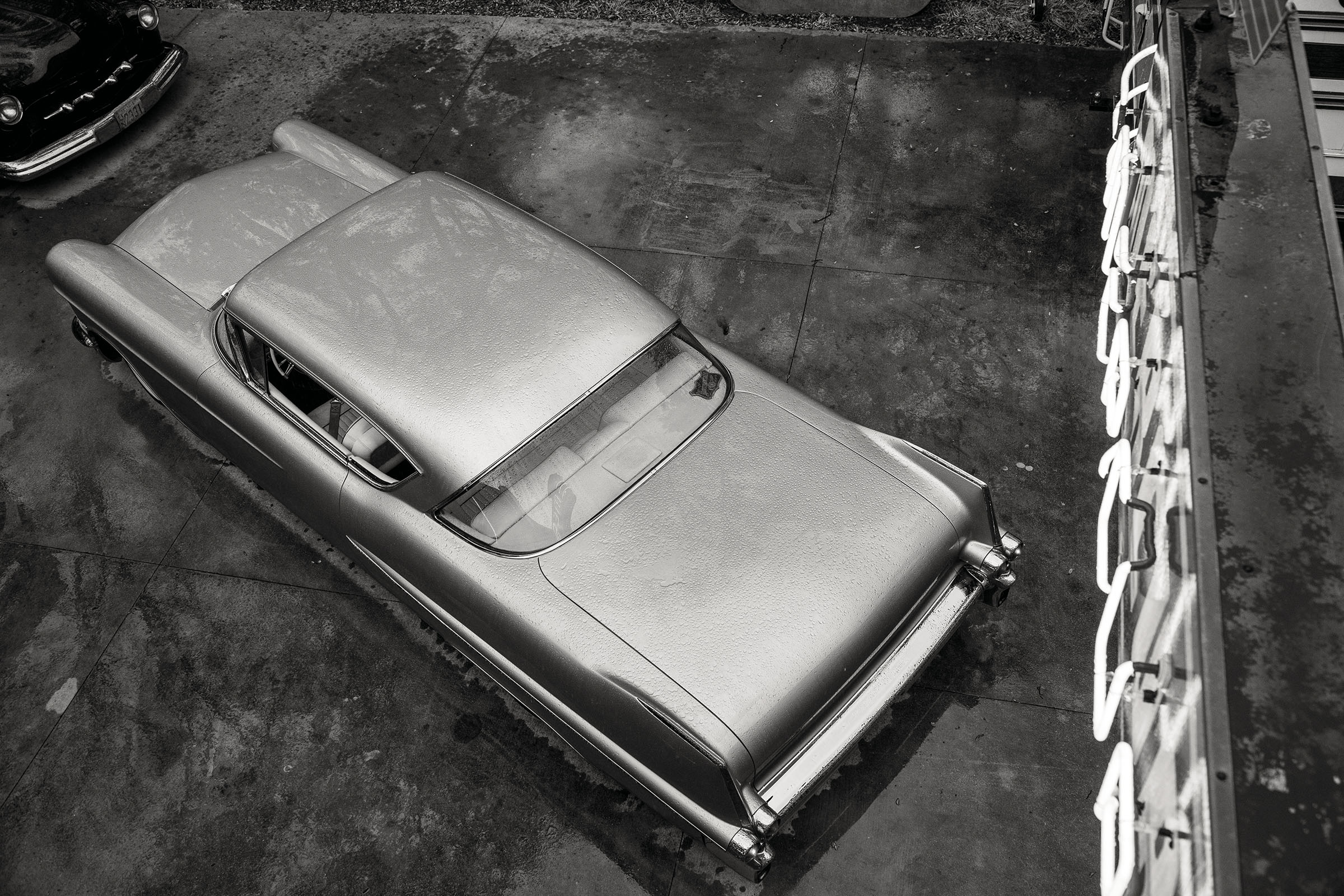 Steve Wertheimer, the owner of Austin music venue the Continental Club and a member of The Kontinentals, owns this 1957 Cadillac. 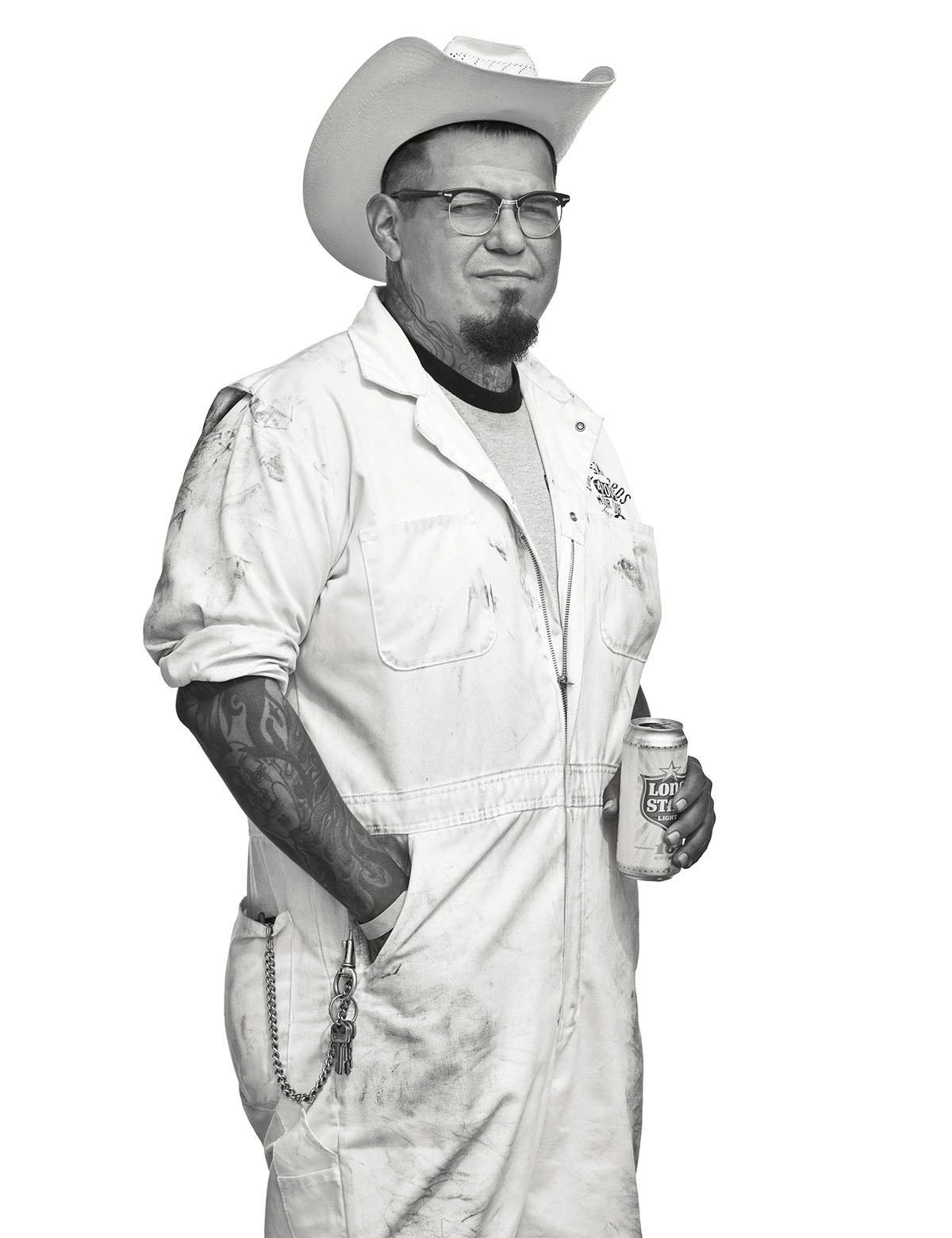 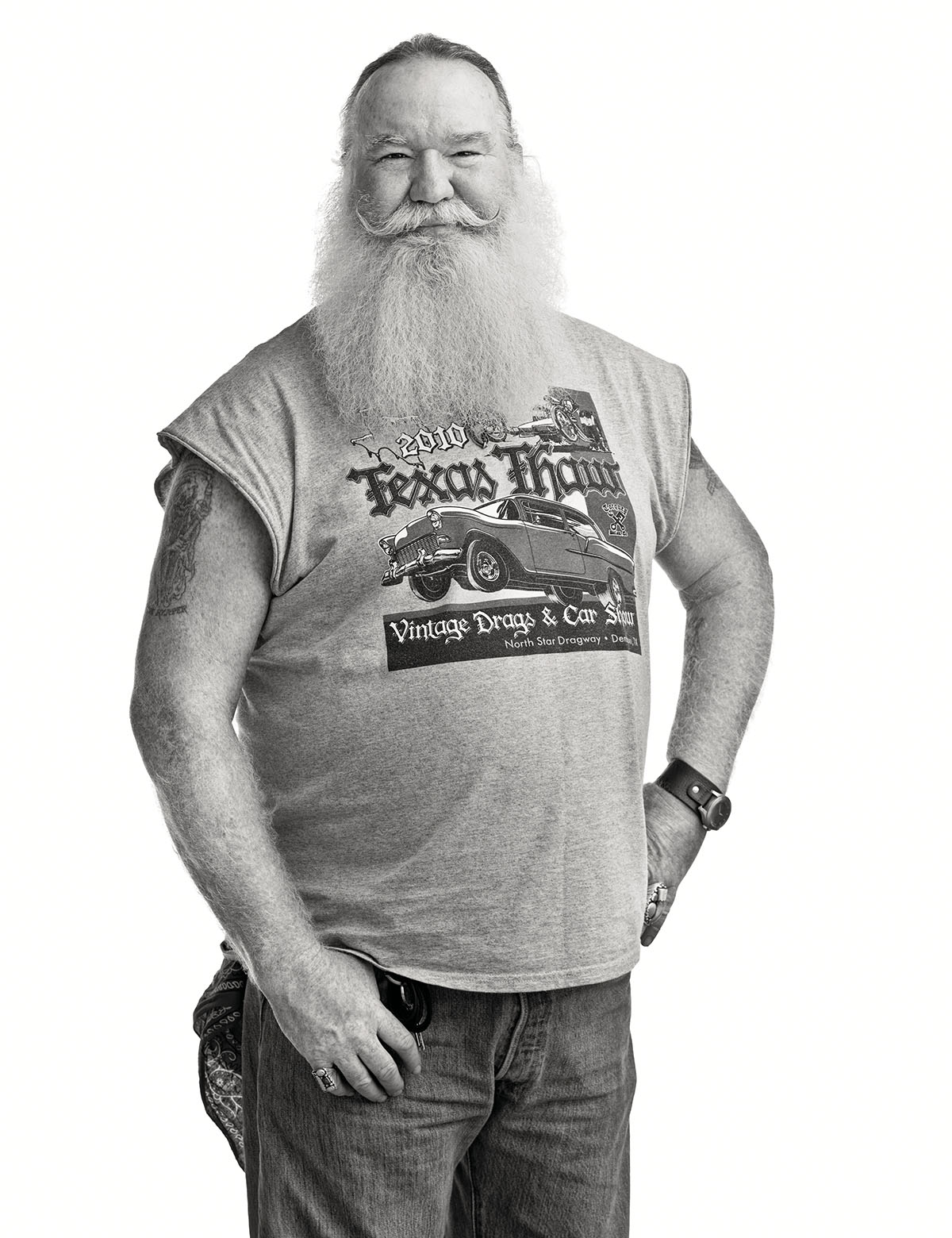 “The biggest benefit of the culture is making friends all over the country,” says Ken McClure of Wright City, Missouri. “It really gives you a little reassurance when cruising in old cars. If you ever have old-car issues while traveling—and you will—you have a network where help is within a handful of phone calls.”
From the February 2021 issue