The Panhandle town of Quitaque attracts outdoors-seekers and individualists. And did we mention fans of chiles rellenos? 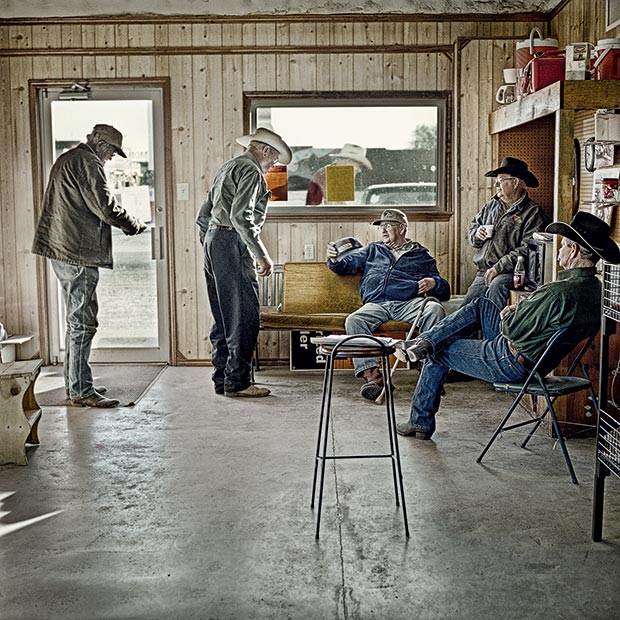 I’ve long been attracted to the ways of life in small towns. This photo feature on Quitaque, a Panhandle town about 40 miles east of I-27, between Amarillo and Lubbock, is the fifth in a series I’ve done for TH. I picked Quitaque because it’s a remote pinprick of a town in the middle of the vast Panhandle, and I thought it would be interesting to reveal the humanity of the place. After all, the bountiful rewards of living in or visiting a small town revolve mostly around the people you meet. They tend to be independent and opinionated.

Driving Texas 86 east from I-27 through Tulia, then through Silverton, the land seems to go on forever. It’s flat and dusty, and conducive to letting your thoughts wander. But just a few miles before Quitaque, you’ll begin to notice outcroppings of craggy juniper trees, then rich ochre soil, and finally, the dramatic red canyons of the Caprock Escarpment’s Valley of Tears—a long, narrow swale surrounded by steep canyons at the intersection of Cottonwood and Los Lingos creeks. Here, more than a century ago, the valley’s lush grasses supported vast herds of buffalo. The canyons appear as a Southwest mirage, a nuanced scene of earth and sky. If you pay attention, a rustic sign will eventually welcome you to Quitaque, population 400, give or take a few. The sign even tells you the local pronunciation: kitty-quay.

Main-Street Quitaque is ghostly. The storefronts—most of which date to the 1950s—on Texas 86 are mostly abandoned now. What’s really interesting, though, is that some of the display windows encase quirky museum-like exhibits, courtesy of the local women’s club, such as taxidermied coyotes and pyramids of high school trophies. However sleepy, Quitaque remains the unspoiled gateway to about 15,000 acres of stunning red sandstone and siltstone vistas that make up Caprock Canyons State Park. The park’s unusual, 64-mile trailway traces a former rail line from South Plains (on the western end) to Estelline (on the eastern end) and attracts hikers, bikers, and horseback-riders. The park brings yet another cycle of life to Quitaque.

But there are plenty of personalities here already. On my visit in October 2007, I met some of them. Take Willie Scoggins, who landed in town from Arkansas with a truckload of other hired hands back in the 1950s, when cotton-picking jobs were abundant here. Scoggins is a quiet man and a deacon at the town’s tiny Macedonia Baptist Church. Why’d he stay in Quitaque? He simply claims he made some good money and never left.

Look for Scoggins—and most everyone else you could hope to meet in Quitaque—at the Sportsman Café, run by Grace Ortiz, who came to Quitaque from Zapata years ago to strip cotton. The walls of the Sportsman are painted bright orange and decorated with photographs of Western scenes like sunsets and working cowboys. If things get too hectic for the staff, customers will take it upon themselves to serve each other coffee or what need be. And while Ortiz makes superb enchiladas, chicken-fried steak, and other made-from-scratch menu items, it’s her chiles rellenos—lightly battered with a nice balance between pepper and cheese—that win her the honorary title of “Queen of Chiles Rellenos.”

On the edge of town, at Tomas Hinojosa’s Quitaque Riding Stables, I caught up to E.J. Ivory while he was breaking bronc horses. Some of these horses will eventually work the trails at Caprock Canyons State Park. A knee injury ended Ivory’s chance at a football career, so instead he opted to pursue his second passion, horses. Perhaps his athletic ability, along with his thoughtful and gentle nature, gives him a training edge. Ivory is so tall that when he straddles a horse, it seems as though his feet could touch the ground.

And then I visited with the grandfatherly Warren Merrell, owner of the local Merrell Food Store, where you can buy everything from canned tomatoes to steaks cut to order. A steady flow of customers have given the store a weathered appeal. Merrell himself is a welder, ranchman, butcher, stocker, mechanic, and philosopher, dispensing advice such as “Figure out what you’ve got and make it work,” and “Live on what you make.”

The first Anglo settler in the area was Comanchero trader José Piedad Tafoya, who set up a trading post in 1865 to trade dry goods and ammunition with the Comanches in exchange for rustled livestock. However, it was Charles Goodnight, perhaps the most famous rancher in Texas history, who in the 1870s brought cattle to the area and named the fledgling community Quitaque. According to one story, he believed “Quitaque” was the Comanche word for “end of the trail.”

Ranching is still at the heart of Quitaque, and it’s not uncommon to see three generations of cowboys corralled up at the Valley Farm Store for a round of morning coffee and tall tales. Elder statesman Earl Patrick, perhaps Quitaque’s best-known yarn-spinner, holds court here on a regular basis. Catch him in a good mood, and he’ll likely brag about the accomplishments of his cousin C.L. Hawkins, who takes care of the majestic Texas State Bison Herd at Caprock Canyons State Park. Now numbering more than 60, these bison descended from the half-dozen bison bred by Charles Goodnight.

Spend some time getting to know this tiny Panhandle town. Not only is it the gateway to the stunning panoramas and adventures of the Caprock canyons, but it’s also a window to a hardscrabble world where a handshake seals deals, a tall tale becomes reality, and hard work and ingenuity mean that life goes on.