Drink Alongside Cowboys at this Historic Watering Hole in Fort Worth 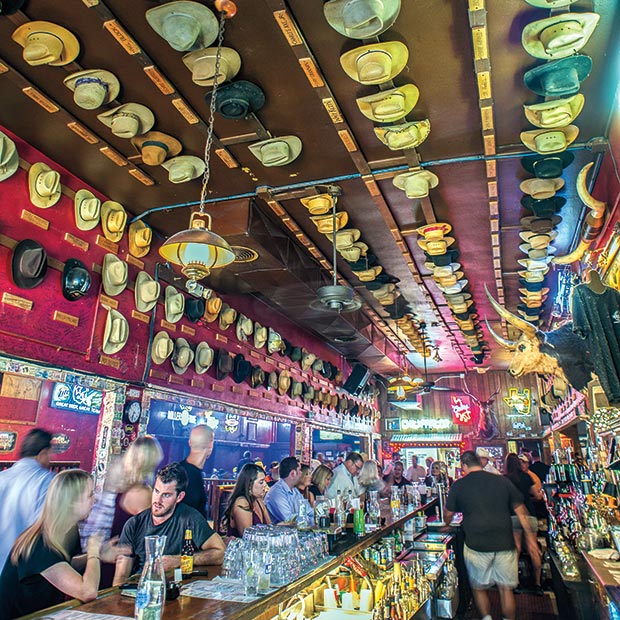 This iconic bar in the Fort Worth Stockyards boasts hundreds of cowboy hats nailed to the ceiling and walls, plus live music every night.

When friends and family visit me in Fort Worth, they ask to see the real Cowtown. Piece of cake, I say, and we head out for the north side of town to explore the Stockyards National Historic District. After what seems like hundreds of trips through the beloved old neighborhood, I still get a kick out of seeing our mounted city police force in their cowboy hats with their beautiful horses. Just as much fun is catching the re-enactments of an 1880s Longhorn cattle drive, which take place twice daily on the weathered bricks that cover North Main Street and Exchange Avenue, the crossroads at the Stockyards’ heart.

And when said pals and relatives also want a true taste of Texas history, it’s all right here on Exchange Avenue, as well: The White Elephant Saloon is a treasure straight from Fort Worth’s gun-slinging days, with roots in the 1890s—though the present bar opened in the 1970s. It’s easily the most iconic bar in town, offering a mix of personality and good food and drinks.

The saloon’s doorway sits almost directly beneath the famous Fort Worth Stockyards sign, which soars overhead across Exchange. I enjoy watching locals and tourists alike snap photographs under the sign and then wander into the White Elephant for a cold one.

To step inside the saloon is to land in a friendly, ongoing celebration. Sometimes, it’s a relatively tame get-together of a few friends hanging out at the aged brass rail along the wooden bar, listening to a crooner on the adjacent stage singing about the rodeo, love, and loss. Other times, the place is packed with a combination of regulars, tourists from Australia and Germany, and people like me, bringing friends in for a longneck and a game of shuffleboard. And if we’re lucky, we happen upon a local character in period costume known as Wild Bill, posing for photos and sharing jokes with the regulars.

The saloon’s doorway sits almost directly beneath the famous Fort Worth Stockyards sign, which soars overhead across Exchange Avenue.

Famed local chef Tim Love bought the saloon a few years ago, but the place remains blessedly unchanged in looks and spirit. Behind the bar and in glass-front cases along one wall, there’s a collection of thousands of white elephant figurines, gifts to the saloon owners from friends. Nailed to the ceiling, hundreds of worn cowboy hats are noted with names of the donors on plaques.

The bartenders working behind the L-shaped bar (under a painting of a cartoonish white elephant reclined on a chaise longue) hustle to keep up with requests. More often than not, customers want a cold beer, asking for Lone Star or local products from Rahr & Sons, but good choices also include a specialty cocktail such as a Paloma, a cousin to the margarita that incorporates grapefruit soda. The saloon also keeps Chef Love’s favorite liqueur, a vanilla-citrus brandy from Italy called Tuaca, chilled on tap. Spirits lovers can always ask for a dram of aged whiskeys. And always, the bartenders engage in amusing repartee with guests.

There’s live music here every night and on weekend afternoons, and musicians encourage patrons to get up and dance. Among a hefty roster of local country musicians, fiddler Rachel Stacy usually headlines Monday nights, while Steve Carrasco is the singer on Friday afternoons. On Tuesday nights, the Texas Music Showcase gives aspiring talents a chance to step up and take the spotlight, with house musicians helping win over the crowd.

After a few spins on the well-worn dance floor, my gang and I are usually ready to eat. The White Elephant obliges in two ways: There’s the owner-chef’s Love Shack right outside the saloon doors in the beer garden immediately adjacent; and there’s a new chili parlor operating inside the saloon.

My Love Shack favorite is the Dirty Love Burger ($6.39), a towering construction of bacon, lettuce, tomato, and fried quail egg atop the meat patty, framed by halves of a toasty bun; an accompanying order of addictive, crispy fries is a must. Equally satisfying, the chili offering is a traditional Texas bowl of red that comes with a wide variety of topping options, including shredded cheeses, sour cream, tortilla chips, Fritos, cilantro, jalapeños, and pico de gallo.

When the weather’s nice, it’s best to enjoy the food and drinks outside in the beer garden, where plenty of picnic tables provide seating. There’s also live music in the garden, Thursday through Sunday. Of course, you can eat inside but here’s a caveat: Because the White Elephant is a bar, smoking is permitted by city ordinance.

While the scene is rarely dull at the White Elephant, we count on finding big crowds descending on the saloon on Feb. 8. The date commemorates a notorious gunfight that took place outside the original 1884 White Elephant about 3 miles away. Known for gambling, drinking, and good food, this edition of the Elephant stood downtown in the 300 block of Main Street. A long-brewing feud between saloon owner Luke Short and former city marshal Longhair Jim Courtright came to a head in 1887, with the two engaging in a shootout in front of the bar, leaving Courtright dead. Each year, re-enactors bring the duel to life on Exchange Avenue.

Afterwards, of course, everyone heads back into the saloon—and the bartenders pour another round of Fort Worth flavor.