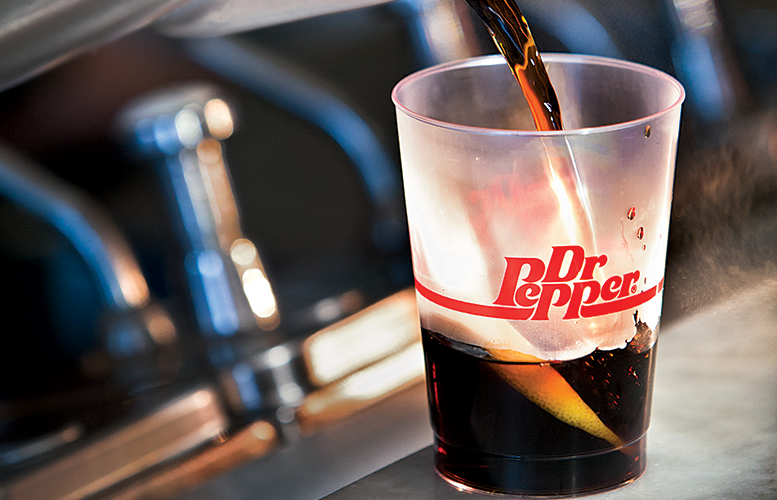 I’ve always been interested in Dr Pepper,” Jack McKinney tells me as we sit down together at the soda fountain inside the Dr Pepper Museum in Waco. Jack has been with the museum for 13 years and serves as its executive director. “When I interviewed for the job, I brought a picture of me from the 1970s drinking Dr Pepper, just to show them I’m a longtime fan.”

With its black-and-white tiled floor, vintage bottles and glassware, and early-20th-Century wood bar, the soda fountain takes visitors back to the early days of Dr Pepper’s success. The rest of the three-story museum displays a treasure trove of memorabilia, including vending machines, bicycles, peddle cars, calendars, clocks, and other Dr Pepper merchandise and advertisements dating back more than 100 years. The bottling room contains a collection of early bottles and cans, along with a 30-foot artesian well formerly used to draw fresh water for the soft drinks. Although not everything is displayed, the museum’s collection includes more than 100,000 items from Dr Pepper and several other soft-drink brands.

“The number-one artifact is this building,” Jack tells me. “It was built in 1906 and used as a Dr Pepper bottling plant until the mid-1960s. It’s in the National Register of Historic Places.”

Invented by Waco pharmacist Charles Alderton in 1885, Dr Pepper—which was originally called a “Waco”—became America’s first major soft drink brand, predating Coca-Cola by about a year. Although the recipe remains a closely guarded secret, Dr Pepper’s distinctive flavor is familiar to many Texans, who are justifiably proud of their native beverage.

And for my money, few other beverages taste as refreshing on a hot day. But I’m not in Waco to enjoy ice-cold Dr Pepper. I’ve come to the museum to try something just a little bit different: hot Dr Pepper.

Perhaps you are right now scrunching your nose at the thought of drinking warm soda pop. I certainly encountered that reaction when I told family and friends about the purpose for my pilgrimage. However, it’s also possible that you’re remembering cool-weather days of the past, when hot Dr Pepper was quite popular. It used to be served in the winter at football games; and some moms considered it a tonic for sore throats. I even located a 1960s television commercial that promoted hot Dr Pepper as the perfect beverage for Christmas parties.

“I’ve certainly drunk hot Dr Pepper when suffering from a cold,” Jack says, as the soda jerk behind the counter hand-pumps a serving of Dr Pepper syrup, reconstitutes it with carbonated water, then heats it up. “But I didn’t know who invented it until I got here.”

In fact, Wesby Parker, who became president of Dr Pepper in 1956, “invented” hot Dr Pepper. Concerned about slow sales during the colder months, Parker experimented at home by heating various soft drinks to create a winter beverage. Though most sodas couldn’t take the heat, he discovered that the flavors of Dr Pepper held up rather well at 180 degrees, about the temperature of hot coffee. The company began marketing hot Dr Pepper in 1959.

“They don’t push it nowadays as much as they used to, but I think they should,” Jack says. “Today, there’s a whole collector’s cult around hot Dr Pepper items, such as electric mug-heaters and carafes that were sold in support of the idea.”

Soon enough, the soda jerk pours hot Dr Pepper over slices of lemon and then places the steaming cups in front of us. And guess what? Hot Dr Pepper is surprisingly delicious. It retains the familiar dark cherry and almond flavors, and the lemon keeps it from tasting too sweet. Without its carbonated fizz, the texture reminds me somewhat of a soft cider. And so I find myself agreeing that they should market hot Dr Pepper like they used to.

At least the old-fashioned soda fountain on the museum’s first floor serves hot Dr Pepper every year from November 1 to March 1. All the hand-pumped soft drinks, which include IBC Root Beer and Big Red, can also be enjoyed in an ice cream float.

“Can it be overstated how important Dr Pepper is to Texans?” I ask Jack before draining the last drops from my cup, obviously caught up in the moment.

“I doubt it. Dr Pepper is an icon of Texas,” he responds. “But when we first opened, a reporter wondered aloud if people would actually come to a museum dedicated to a soft drink. Well, we’ve welcomed more than 1.3 million visitors since 1991, so I guess that answers your question.”