Written by: Paula Disbrowe
Photos by: Will van Overbeek 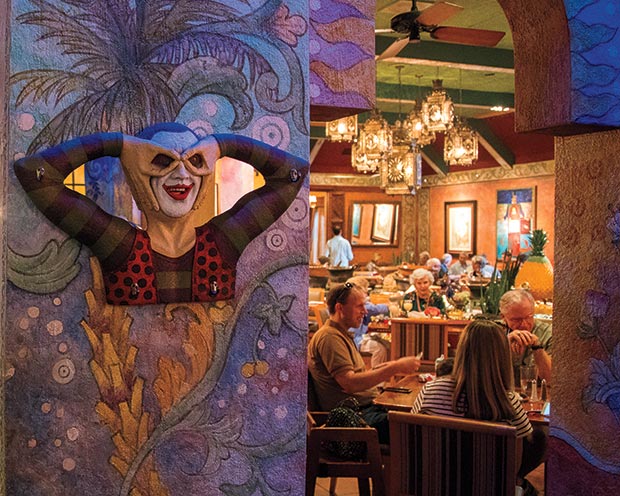 Even before you step through the restaurant’s massive, hand-carved wooden doors, you’ve been transported to a place that usually requires a passport. A light breeze rustles palms and other exotic tropical foliage while young chefs clip fragrant sprigs of cilantro, mint, and epazote from the culinary garden. Inside, gleaming Saltillo tiles, the exhilarating aroma of freshly squeezed limes, and squawked greetings from Paco, the resident parrot, ensure you’ve reached full-on vacation mode. Welcome to Fonda San Miguel in Austin.

If you’ve been lucky enough to dine here, you probably have cherished memories of the experience. In addition to tequila libations, smoky duck enchiladas, and crepas de cajeta, there’s a good chance those reminiscences include a warm exchange with Miguel Ravago, the restaurant’s impossibly gracious chef and co-founder, who died in June.

“A meal at Fonda San Miguel is like crossing the border without leaving Austin,” says longtime patron Lucinda Hutson, author of Viva Tequila! “Sipping watermelon margaritas from hand-blown glasses while sampling cuisine from all regions of Mexico, in a lovely hacienda surrounded by exquisite art, makes life a holiday!”

With its tropical atrium, handpainted walls, and abundance of prominent Mexican art, the restaurant doubles as an exotic refuge.

Miguel charmed adults and children alike. “He was always so kind and patient when we’d ask him about every single dish on the Sunday buffet,” local artist Nancy Mims remembers. “Last time we were there, my son ate so much he had to excuse himself to undo the top button of his britches.”

With its tropical atrium, handpainted walls, and abundance of prominent Mexican art curated by co-founder Tom Gilliland, the restaurant doubles as an exotic refuge.

This year Fonda San Miguel celebrates its 42nd anniversary, as well as a revised edition of the restaurant’s cookbook, Fonda San Miguel: Forty Years of Food and Art by Tom Gilliland and Miguel Ravago (with new recipes and photos, plus a section on tequilas and mezcales). Although Miguel’s loss will be deeply felt by all who knew him (a Día de los Muertos altar honors his memory throughout November), Tom is determined to maintain their traditions of excellence and to keep the restaurant moving forward. He and designer Bill Luft are in the midst of a renovation that will blend the restaurant’s signature Colonial style with a contemporary influence. 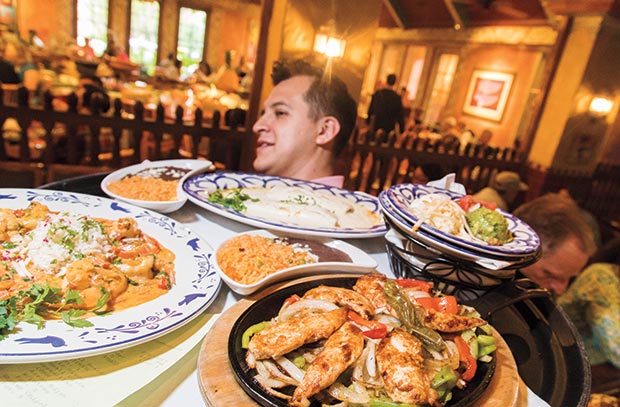 Meals at Fonda San Miguel have introduced generations of Texans to regional Mexican ingredients ranging from huitlacoche to the vast world of chiles.

Miguel’s love for cooking was first inspired by his grandmother, Guadalupe Velasquez, a tireless home cook who often prepared three meals a day for her large family. By the time he was 6, Miguel was at her elbow, experiencing the flavors of Veracruz and her native Sonora. When Miguel and Tom met as adults in Arizona, Tom had just spent a summer as a law student in Mexico City, where he learned to appreciate the country’s regional dishes. The two bonded over their passion for Mexican cuisine and culture, and soon became friends. When he and Tom found themselves in Austin in 1968, they both landed jobs at the Texas Capitol. Through their love of entertaining, they developed an appreciative following for Miguel’s cooking and natural flair for hospitality.

Ultimately, their passion for the culinary world trumped legislative work. Four years later, they combined their talents to open San Angel Restaurant in Houston. Miguel enticed his grandmother to help oversee the restaurant, and their menu of Sonoran cuisine quickly attracted fans—including Diana Kennedy, who’d just published her first book, The Cuisines of Mexico. The three became good friends, and with Diana’s encouragement and mentoring, their next venture took flight.

1. Toast the chiles directly over an open flame, on the broiler, or on a griddle to char the skins. When well-blistered and charred, put the chiles in a plastic bag for about 10 minutes. Then remove the loosened skin with paper towels. Split the chiles open, remove seeds and veins, and cut into 1/4-inch wide strips.

2. In a saucepan, heat the oil over medium heat and fry the onion, garlic, and tomatoes, stirring constantly until the mixture forms a thick paste. Add the chicken broth, 3 of the chiles, and salt to taste. Cook over low heat until the mixture comes to a simmer.

3. Drop raw eggs into the hot sauce, one by one, poaching them about 4 minutes (or to your desired degree of doneness). To serve, place two poached eggs per serving in a bowl, then top with tomato sauce and chile strips. Garnish with the crumbled queso fresco and serve with hot corn tortillas.

Serendipity led them to a leafy neighborhood in North Austin and the site of a recently closed restaurant. “I was standing at a 7-Eleven using the pay phone when I looked across the street and saw the ‘For Rent’ sign,” Tom says.

Tom and Miguel opened Fonda San Miguel in 1975 and were initially greeted by diners more accustomed to melted Velveeta than chicken mole. At the time, now-common ingredients such as tomatillos, Oaxacan cheese, and dried chiles weren’t readily available in stores, so Miguel and Tom went to great lengths to source ingredients from Mexico. Even black beans had to be imported in 55-gallon containers.

Today the restaurant’s intimate setting and location—a world away from the sea of construction cranes in downtown Austin—make it even more of a treasured oasis. Long live Fonda San Miguel.