You Know You Want One: San Antonio’s Famous Puffy Tacos 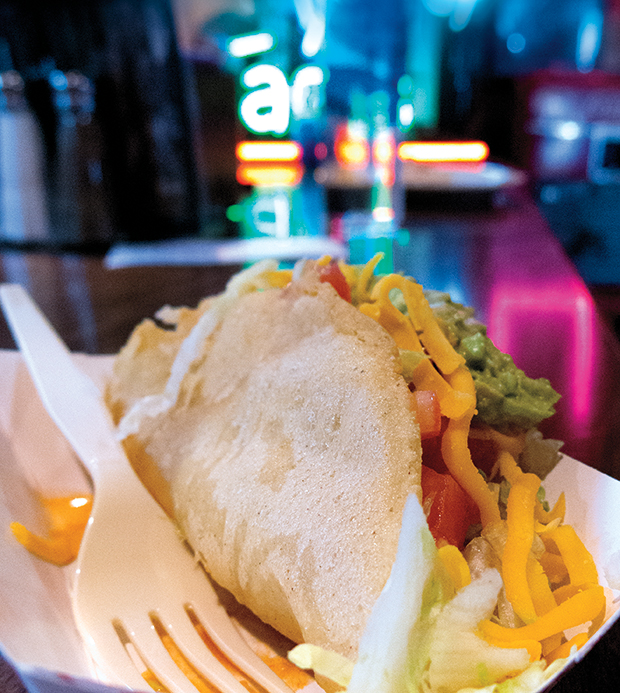 Anyone who’s been to a Spurs game in San Antonio can attest that the city is filled with red-hot, habanero-grade pride. The iconic Alamo and its sister missions, a lively Riverwalk, and plenty of community-wide celebrations like Fiesta all give the historic Texas city its flavor—and no place captures the city’s character better than Ray’s Drive Inn, the West Side icehouse where the locally famous puffy taco was born.

Get Your Puffy Tacos Right Here

True to its name, the restaurant still offers carhop service to guests parked with headlights aglow, but entering the humble stone building is half the experience. Kitschy, colorful paintings and neon signs warm the main dining room, where candles flicker in a Virgin of Guadalupe altar and a jukebox plays songs by George Strait, Los Tigres del Norte, and Fats Domino.

“It’s kind of like a museum in a way,” says John Louis Lopez, the nephew of founder Ray Lopez, who opened the restaurant in 1956. “My uncle loved collecting antiques and so did my dad. … They could never turn their backs on old stuff.”

The Lopez family has a long legacy in the food world. Ray Lopez’s parents, Louis and Basilia Lopez, ran a fruit and grocery store out of their West Side house from 1926 to 1949. Ray, the oldest of eight children, eventually opened Ray’s Drive Inn, enlisting his brother Arturo in the dish pit and kitchen.

In the early days, Ray’s sold five hamburgers for a dollar, screening free movies and offering live music on the weekends by local acts like Tejano legend Isidro “El Indio” López. It didn’t take long before Ray’s became a community hub of San Antonio’s predominately Latino West Side. In addition to griddled burgers and fried chicken, Ray’s Drive Inn quickly became known for the curiously light, meat-stuffed masa pockets known then as “crispy tacos.” The shells were inspired by memories of Ray’s grandmother, who mixed masa with lard, leavening, and salt before deep-frying each round of dough—molded over a wooden spoon—until it puffed into a golden, bubbly pocket.

In 1969, the youngest Lopez brother, Henry, branched out on his own to open a restaurant called El Taco Food To Go. The tiny spot, with room for just two tables and a pick-up window, offered burgers, fried chicken, and fish. But the stars of the menu were those crunchy masa shells, which were by now filled with meats topped with lettuce, chopped tomato, and a shower of shredded cheese.

Meanwhile, Arturo had relocated to Southern California with his wife, but he hadn’t left the restaurant business—or those distinct masa shells—behind. In 1977, he launched a joint called Arturo’s Puffy Tacos, bringing the homegrown Tex-Mex treat to the West Coast—and finally giving a name to the addictively crunchy tacos. The following year in Texas, Henry opened Henry’s Puffy Tacos in a small building not far from the old El Taco, expanding capacity to a full eight tables.

“I told Arturo, ‘You control California, and I’ll control Texas,’” remembers Henry. “I didn’t know it was going to be this popular!” 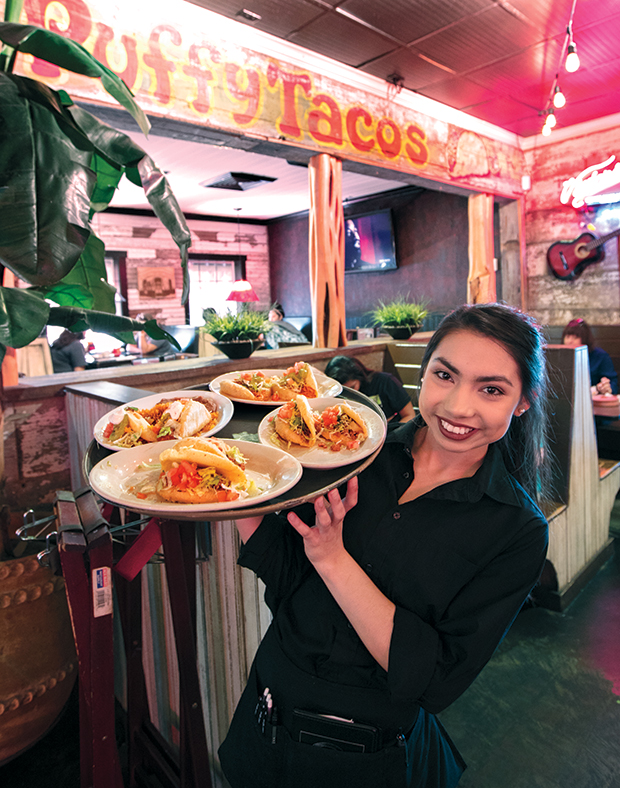 In 1980, Ray sold Ray’s Drive Inn to Arturo, who began traveling between states to run the restaurants with the help of his wife and children. Outside of rebranding the famed crispy tacos as “puffy tacos” and adding space to the restaurant to house more treasures, Arturo honored his brother’s vision and changed very little about the place. But across town at his restaurant, Henry aimed big. In 1989, his son Jaime created the character of Henry the Puffy Taco, a spirited, costumed dancing taco that became the mascot for the San Antonio Missions baseball team.

“When my dad opened up in 1978, hardly anybody knew what a puffy taco was,” Jaime says. “The mascot helped bring recognition to Henry’s Puffy Tacos. That little restaurant was packed every single day—you couldn’t find a place to stand!”

Henry eventually graduated to a larger restaurant and opened an express drive-through location. In 1990, the restaurant expanded again. Henry’s four children, who grew up bussing tables, serving, and cooking at the family restaurants, went on to study law, restaurant management, culinary arts, and business administration. Now, they all pitch in in various capacities, with more nieces and nephews getting involved each year.

“Without my family, I wouldn’t be where I am,” says Henry, now 75 and still active in the flourishing business, where servers hustle around stylishly distressed shiplap dividers in the various dining rooms. While customers wait for their tables, they can study family photos, articles about the famous puffy tacos, and fringed leather jackets once worn by Tejano stars, which are displayed behind glass.

“Uncle Ray started it all, and then Henry took it to a new level with his restaurant,” John Louis says. “My uncle does a great job at maintaining the integrity of puffy.”

“We’ve always been very proud knowing that the history goes back to Ray’s,” Jaime says, “and it’s very interesting how it’s all evolved to what it is today.”

Back on the West Side, not much has changed at Ray’s Drive Inn since Arturo passed away in 2015, and the puffy taco—trademarked in 1982—carries on the family legacy. Each one is drained well of excess grease, and fillings range from succulent chicken and savory carne guisada to a homestyle picadillo. And though there are puffy tacos on just about every Mexican menu in San Antonio these days, locals know Ray’s and Henry’s are where to go for the real deal.

“I look at it as an honor,” says John Louis, who continues to renew Arturo’s patent on puffy tacos but has never pursued imitators. Over the years, the Lopez brothers have engaged in good-natured competition over whose puffy tacos are the best in the city, and there’s still an amiable debate over who really named the puffy taco. But, in the end, blood is thicker than—well, salsa.

“They get praise, and we get praise, but it doesn’t make a difference because it’s more about where the puffy taco came from,” Jaime says. “It came from our parents working hard and passing it onto us, and we’re going to continue it.”