Sophisticated Non-Alcoholic Beverages Are on the Rise in Texas Bars 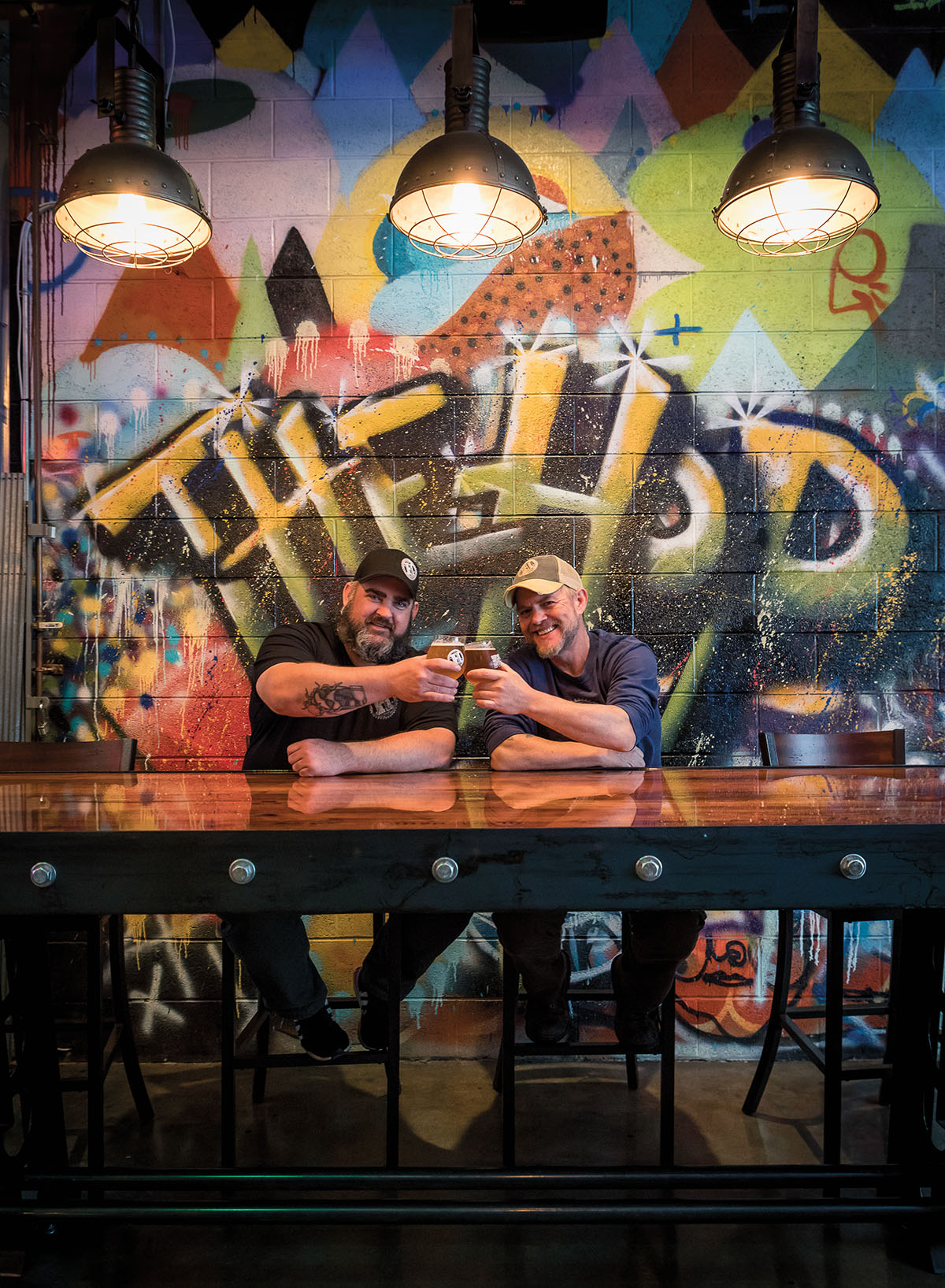 Matt Hill and Macy Moore, owners of HopFusion brewery in Fort Worth, which offers nonalcoholic brews

On a sunny Saturday, I sat on the patio of a Fort Worth bar enjoying a drink, an act that was radical for me. I gave up booze 10 years ago, and HopFusion was the kind of place I mostly saw from the outside: picnic tables, good music, 20 beers on tap. But I’d heard the brewery served a tasty carbonated iced tea, so I sidled up to the bar and watched as the server pulled the golden draught from the tap. I took my seat among chatting strangers, and as I sipped my drink (good! spicy!), a warmth spread through me. Not inebriation, but something I’d been chasing in these spaces for a long time: belonging.

Until recently, being a nondrinker in a drinking world meant a certain exile. The experience of getting sober was so alienating that I wrote a memoir, called Blackout, about trying to find my place again. In bars and restaurants, where I once found pleasure in top-shelf ingredients, padded menus, and elegant stemware, I was resigned to plastic cups and second-tier status.

In the decade since I quit drinking, something remarkable happened: The nonalcoholic beverage market exploded. In addition to flavored seltzers and surprisingly good nonalcoholic beer, botanicals, shrubs, and sophisticated elixirs have become increasingly available. This was driven in part by healthier lifestyles. At a time when organic, keto, and gluten-free have become common terms, younger generations seem much less enamored with getting hammered. Considering about 30% of American adults didn’t drink at all in the past year, according to the National Institute on Alcohol Abuse and Alcoholism, acknowledging this demographic only makes sense. Big Booze has scrambled to take advantage of the nonalcoholic trend.

“There’s never been a better time to be a nondrinker,” says Julia Bainbridge, a former editor for Bon Appétit. Her new recipe book of nonalcoholic cocktails, Good Drinks: Alcohol-Free Recipes for When You’re Not Drinking for Whatever Reason, captures how mixologists are bringing creativity into sober cocktails, a genre so historically unhip that its most famous entry is named after Shirley Temple. “I wanted this to be sexy,” Bainbridge says. “I wanted it to be adult.” She crossed the country acquiring recipes, including from Will Stewart of Houston restaurant Coltivare. His mix of saba (a syrup made from grapes), sherry vinegar, and Luxardo cherry syrup announces its maturity with the name, “Don’t Call Me Shirley.” 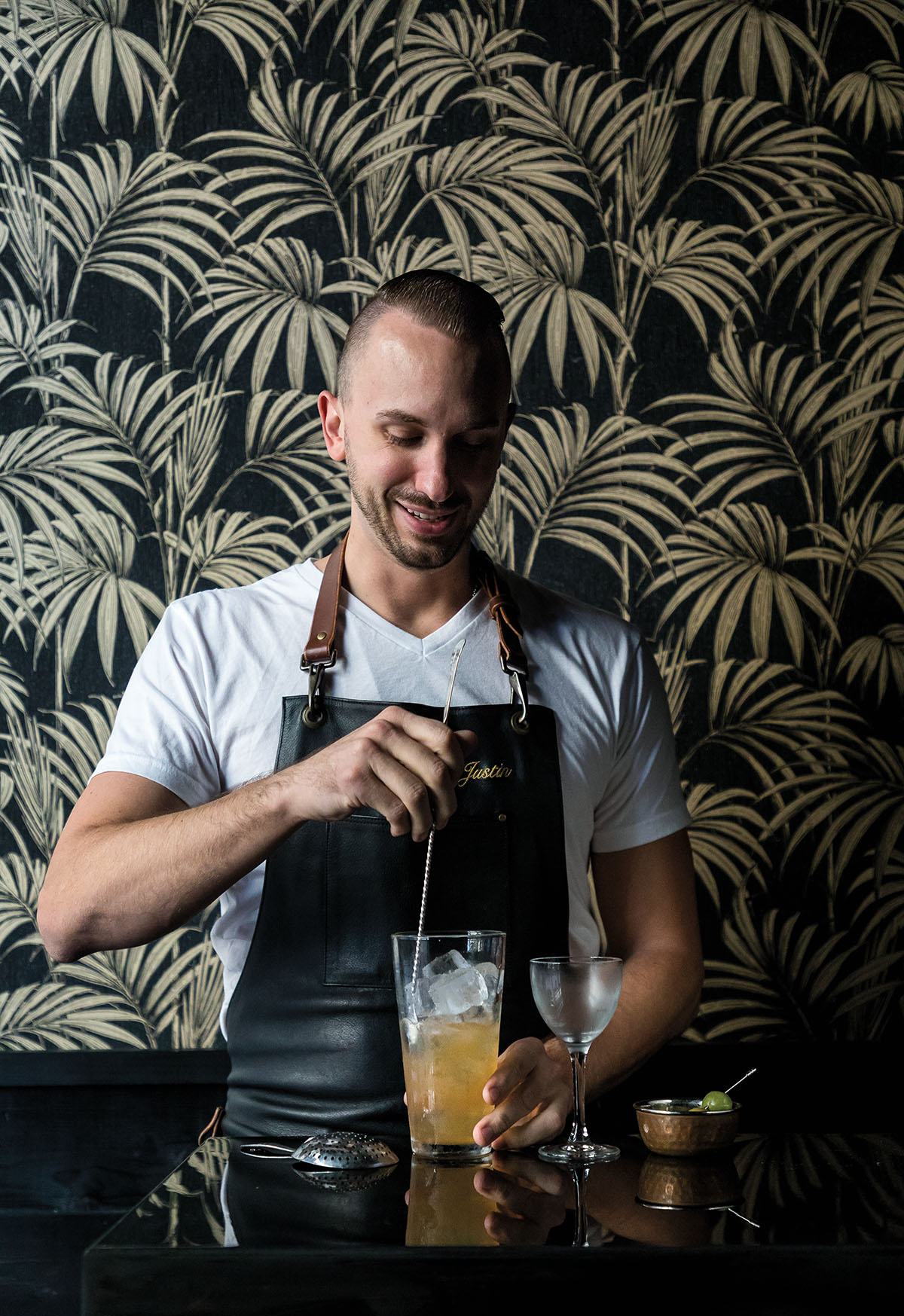 Justin Lavenue, owner of Roosevelt Room in Austin, mixing up a nonalcoholic cocktail

The word “mocktails” has fallen out of favor among experts, since it sounds unserious, even derisive. (Virgin cocktails is just embarrassing.) Nobody has quite settled on the successor term, though zero-proof cocktails is the one I hear most often. What’s clear is that these next-level cocktails are pulling up a stool at some of the best bars and restaurants.

“We want to make everyone feel welcome,” says Justin Lavenue, bartender and co-owner of the Roosevelt Room in Austin. His menu features three nonalcoholic cocktails, including the Glitter and Marigold, whose combination of orange juice, orange flower water, pistachio extract, honey, vanilla bean, cream, and cinnamon powder was inspired by an Orange Julius. The “N’artini,” a martini alternative, swirls juniper tea and pear juice with a zero-proof spirit called Seedlip Spice. At most bars, servers will usually improvise for nondrinking clientele (“What do you like?” bartenders ask, which can cause a mental block, since what I liked was drinks with alcohol). But there is a massive psychological shift when an establishment crafts original nonalcoholic cocktails and gives them space on the menu, a gesture of inclusion that can tilt the direction of an entire evening—at least for me. Lavenue plans to double the number of nonalcoholic cocktails later this year, an effort spearheaded by a bartender who recently got sober.

You don’t have to live in a big city to experience such zero-proof artistry, since so many brands are available online for delivery. “There’s a new product on my doorstep every week,” says Chris Marshall, owner of Sans Bar in Austin, one of the country’s first sober bars. “It’s like the Wild West out there, and the palette you can paint with has grown tenfold.” When Marshall opened his venue in 2017, the notion of a nightlife spot without booze sounded odd. The past three years have proven what he knew as a sober person and former substance use counselor: People needed healthy, uplifting spaces to connect without booze. In addition to having a brick-and-mortar spot in East Austin, Marshall has hosted pop-up events across the country, although during the pandemic he’s pivoted to virtual “Sans Bar Where You Are” events, which include kits for at-home drinks.

The idea of sober people enjoying cocktails or bars of any kind isn’t exactly uncomplicated. While some products have no alcohol, many have 0.5%, the maximum amount allowed by the FDA to be labeled as nonalcoholic. That’s the same alcoholic content as orange juice, but it’s not nothing. Also, once-beloved smells and long-forbidden tastes can be unsettling. But people in recovery are only a slice of the larger group of nondrinkers, which potentially includes athletes, dieters, new mothers, and people with health concerns or an early work day looming.

“Drinking socially is a 10,000-year-old ritual, and we should have come further by now,” says Jen Batchelor, whose company, Kin Euphorics, is an attempt to nudge along progress. Kin Euphorics produces a line of drinks that are alcohol-free, but induce a light buzz with adaptogens (stress-relieving herbs) and nootropics (compounds said to enhance cognition). Batchelor recently moved to Austin from New York, and she’s currently looking for a space where she can develop more products to redefine the modern bar experience. “I think alcohol is going the way of the dodo bird,” she says. It might sound absurd until you consider how many staples of American life—milk, meat, tobacco, soda—are trending in that direction.

The past year proved how swift change can come, how unpredictable our world is. Who knows what bars will look like in the future? But it’s a welcome change to see people thinking creatively about how to make sure our social rituals are defined by connection and joy, not the presence—or absence—of booze.

My friend Grace, who lives in Austin, recently enrolled in a six-week program called Night Shift, designed for potential bar owners or anyone who wants to “reimagine nightlife.” The class has gotten her thinking about how many people walk into a bar and think, I’m too sober for this. Does it have to be that way? “People rely on alcohol so much to have a good time,” Grace told me, “it’s like we’ve forgotten what a good time is.”